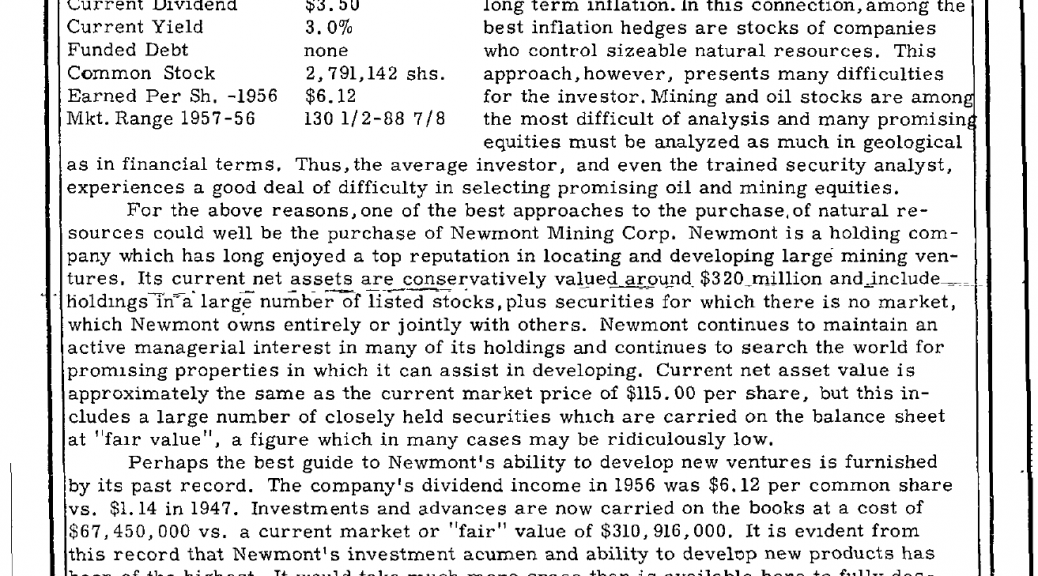 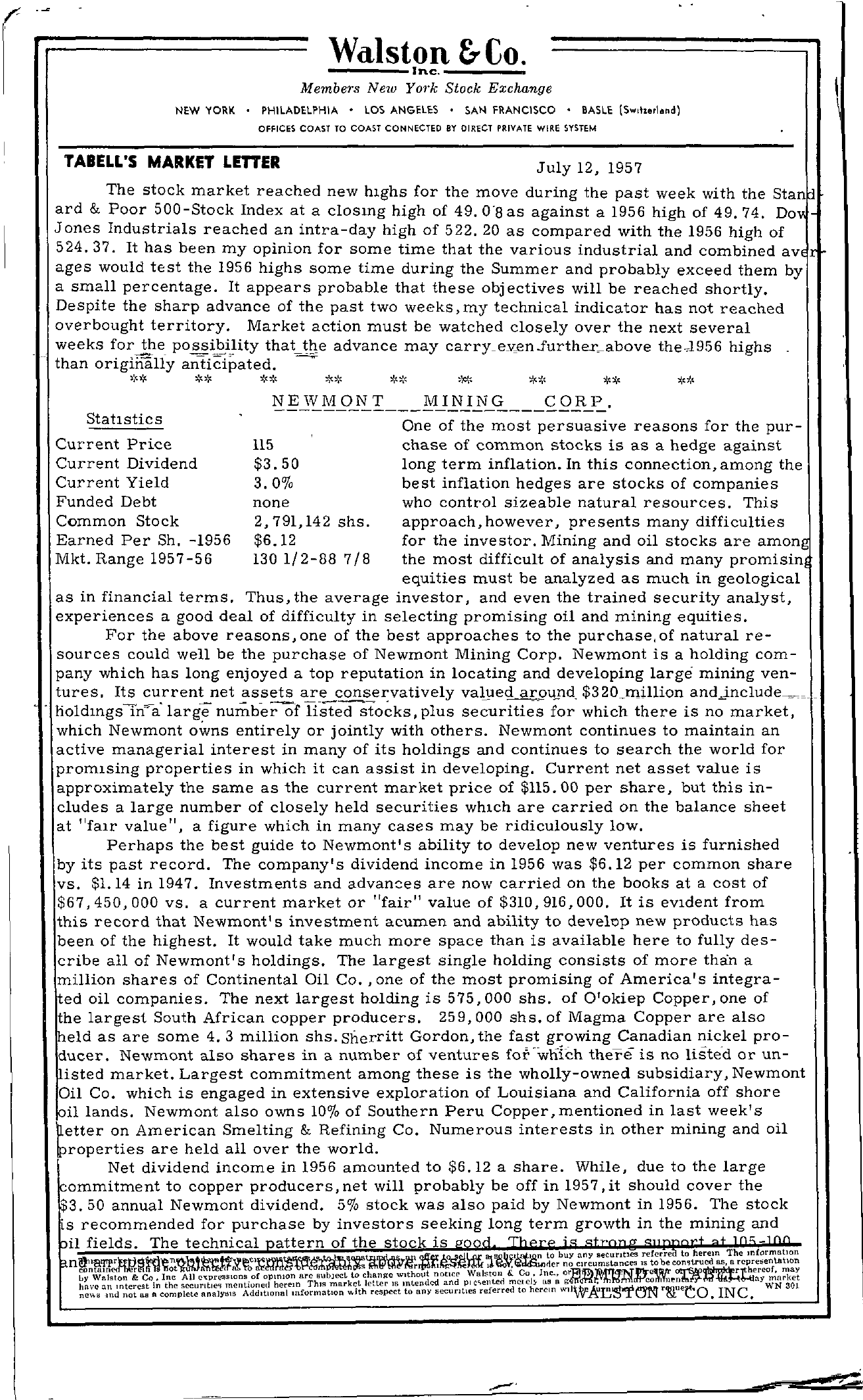 NEW YORK Wdlston &Co. – – – – – I n c . – Members New Y01'k Stock Exchange PHILADELPHIA' LOS ANGELES SAN FRANCISCO BASLE (Sw,he,ld) OFFICES COAST TO COAST CONNECTED BY DIRECT PRIVATE WIRE SYSTEM TABELL'S MARKET LEnER July 12, 1957 The stock market reached new hlghs for the move during the past week with the Stan ard & Poor 500-Stock Index at a closmg high of 49. 0'8as against a 1956 high of 49.74. Dov Jones Industrials reached an intra-day high of 522. 20 as compared with the 1956 high of 524.37. It has been my opinion for some time that the various industrial and combined av ages would test the 1956 highs some time during the Summer and probably exceed them by a small percentage. It appears probable that these objectives will be reached shortly. Despite the sharp advance of the past two weeks, my technical indicator has not reached overbought territory. Market action must be watched closely over the next several weeks forJ!te possilJiJity thatthe advance may carrye\CenJurtherabove highs than originally anticipated. ';t -, \ Statlstics One of the most persuasive reasons for the pur- Current Price 115 chase of common stocks is as a hedge against Current Dividend 3.50 long term inflation. In this connection, among the Current Yield 3.0 best inflation hedges are stocks of companies Funded Debt none who control sizeable natural resources. This Common Stock 2,791,142 shs. approach, however, presents many difficulties Earned Per Sh. -1956 6.12 for the investor. Mining and oil stocks are among Mkt. Range 1957 -56 1301/2-887/8 the most difficult of analysis and many promisin! equities must be analyzed as much in geological as in financial terms. Thus, the average investor, and even the trained security analyst, experiences a good deal of difficulty in selecting promising oil and mining equities. For the above reasons, one of the best approaches to the purchase. of natural re- sources could well be the purchase of Newmont Mining Corp. Newmont is a holding com- pany which has long enjoyed a top reputation in locating and developing large mining ven- oftures. Its current net assets are conservatively valued argund 320rnillion .. Iioldmgs number fisted plus for which there is no market, which Newmont owns entirely or jointly with others. Newmont continues to maintain an active managerial interest in many of its holdings and continues to search the world for promlsing properties in which it can assist in developing. Current net asset value is approximately the same as the current market price of 115.00 per share, but this in- cludes a large number of closely held securities whlch are carried on the balance sheet at falr value, a figure which in many cases may be ridiculously low. Perhaps the best guide to Newmont's ability to develop new ventures is furnished by its past record. The company's dividend income in 1956 was 6.12 per common share vs. 1. 14 in 1947. Investments and advan(!es are now carried on the books at a cost of 67,450,000 vs. a current market or fair value of 310,916,000. It is eVldent from this record that Newmont's investment acumen and ability to develop new products has been of the highest. It would take much more space than is available here to fully des- cribe all of Newmont's holdings. The largest single holding consists of more than a million shares of Continental Oil Co. ,one of the most promising of America's integra- ted oil companies. The next largest holding is 575,000 shs. of O'okiep Copper, one of the largest South African copper producers. 259,000 shs. of Magma Copper are also as are some 4.3 million shs. Sherritt Gordon, the fast growing Canadian nickel pro- ducer. Newmont also shares in a number of ventures for-wliiCh there is no listed or un- isted market. Largest commitment among these is the wholly-owned subsidiary, Newmont Oil Co. which is engaged in extensive exploration of Louisiana and California off shore !oil lands. Newmont also owns 10 of Southern Peru Copper, mentioned in last week's on American Smelting & Refining Co. Numerous interests in other mining and oil IProperties are held all over the world. Net dividend income in 1956 amounted to 6.12 a share. While, due to the large commitment to copper producers,net will probably be off in 1957 ,it should cover the 3.50 annual Newmont dividend. 5 stock was also paid by Newmont in 1956. The stock .s recommended for purchase by investors seeking long term growth in the mining and oil fields. The technical pattern of the stock is pood. There; ,(T ' . ats,Q!Jc1iatl.l2n to buy any securItles referrea to herelll The mformahon ro hbyavWe aanlstIonnte&reCstoin. Inc the All c,,prlffiSlOn'st'ooaf'to!'Ptditnttion are BubJect. W Itfo1;Schangc WIthout notice SecUrltle1 m(!ntioned herem Th1!1 market letter IS mtendcd and Wa ,stOll PI c'ellted C0, Inc., no 0 meleb 1,8 D go cIrcumstances IS to be con'ltrucd as, Dr..tetphreerseeonmft,aarmtikonenyt WN 301 INC .nC\\,S not DB tl complete onolYllls Additional informatIOn \\,ith respect to any secUrities referred to hercln r'giueto. .-'