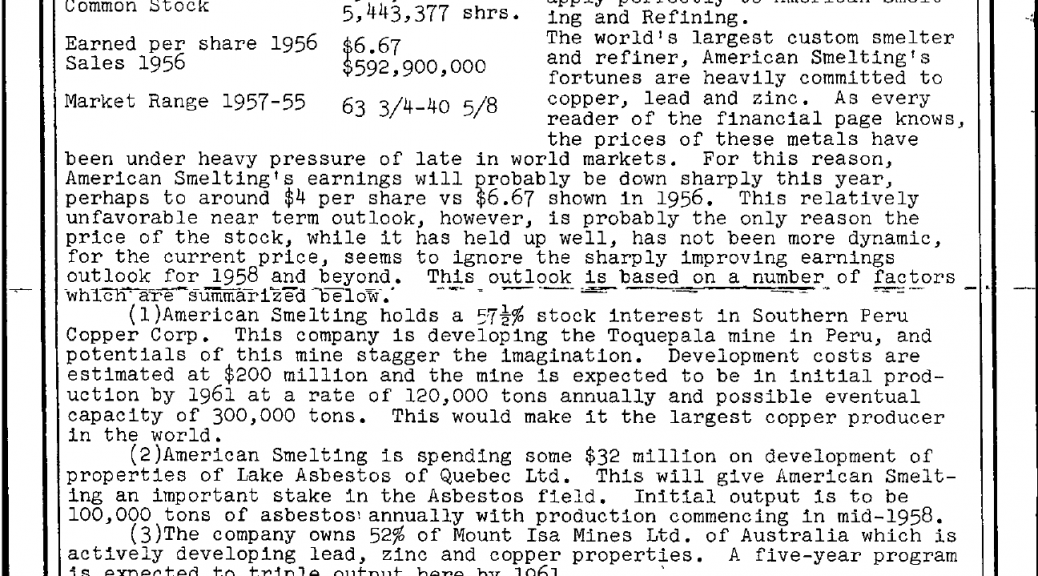 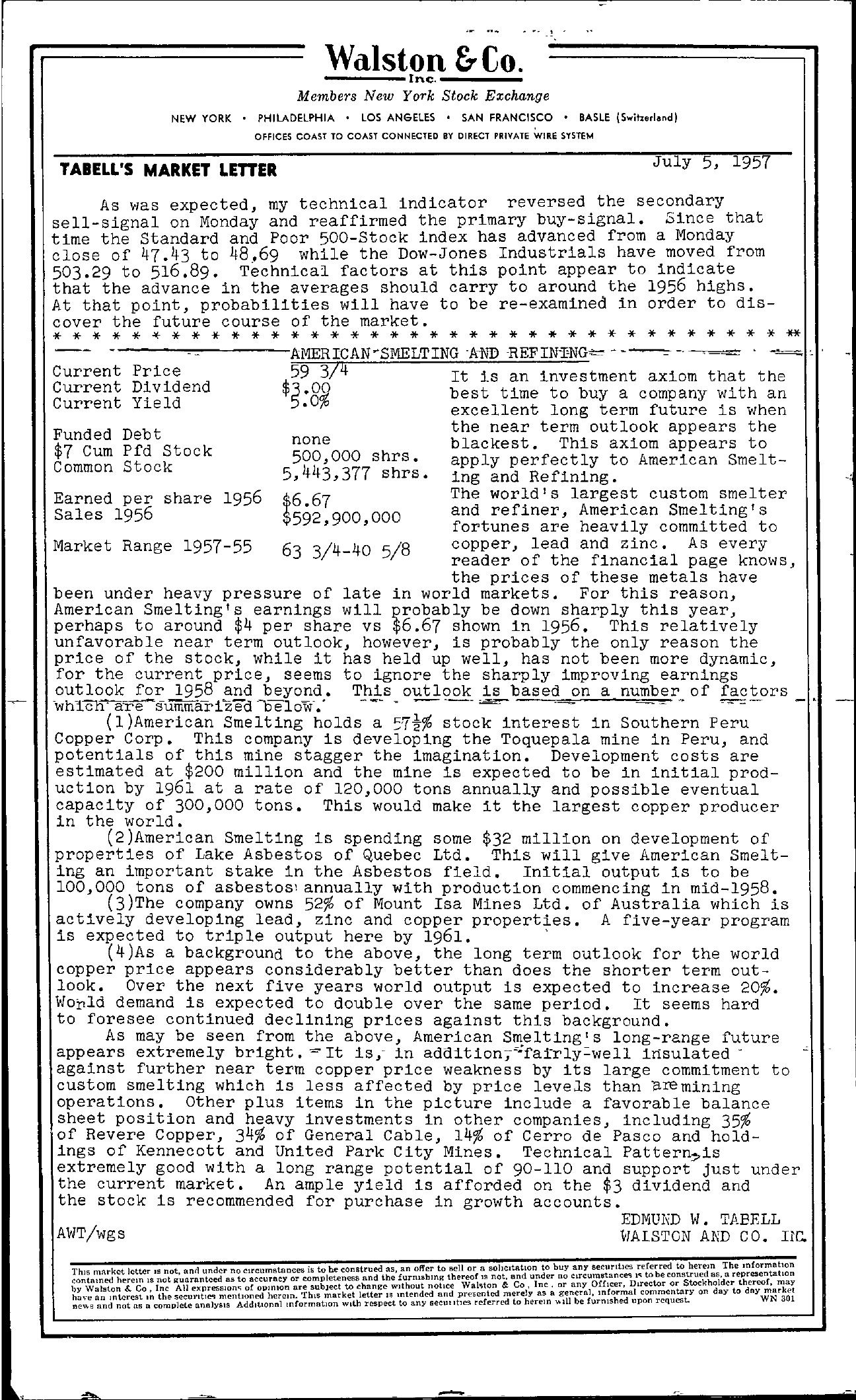 r—————————————————————————– — — Walston &Co. Inc. Members New York Stock Exchange NEW YORK PHILADELPHIA LOS ANGELES SAN FRANCISCO BASLE (Sw;t,,,I40d) OFFICES COAST TO COAST CONNECTED BY DIRECT PRIVATE WIRE SYSTEM TABELL'S MARKET LETTER July 5, 1957 As was expected, my technical indicator reversed.the sell-signal on Monday and reaffirmed the primary buy-slgnal. 0ince that time the Standard and Poor 500-Stock index has advanced from a Monday close of 47.43 to 48.69 while the Dow-Jones Industrials have moved from 503.29 to 516.89. Technical factors at this point appear to indicate that the advance in the averages should carry to around the 1956 highs. At that point, probabilities will have to be re-examined in order to dis- cover the future course of the market. – ——-. – . Current Price Current Dividend Current Yield 59 3/4 58 It is an investment axiom that the best time to buy a company with an excellent long term future is when Funded Debt 7 Cum Pfd Stock Common Stock none 500,000 shrs. 5,443,377 shrs. the near term outlook appears the blackest. This axiom appears to apply perfectly to American Smelting and Refining. Earned per share 1956 Sales 1956 6.67 592,900,000 The world's largest custom smelter and refiner, American Smelting's fortunes are heavily committed to Market Range 1957-55 63 3/4-40 5/8 copper, lead and zinc. As every reader of the financial page knows, the prices of these metals have been under heavy pressure of late in world markets. For this reason, American Smelting's earnings will probably be down sharply this year, perhaps to around 4 per share vs 6.67 shown in 1956. This relatively unfavorable near term outlook, however, is probably the only reason the price of the stock, while it has held up well, has not been more dynamic, for the current price, seems to ignore the sharply improving earnings -owuh1tl.cono' karfeo–rsum19n5r8ariaznedd beyond. This outlook is based on a number of factors – -. -L (l)American Smelting holds a 57t stock interest in Southern Peru Copper Corp. This company is developing the Toquepala mine in Peru, and potentials of this mine stagger the imagination. Development costs are estimated at 200 million and the mine is expected to be in initial prod- uction by 1961 at a rate of 120,000 tons annually and possible eventual capacity of 300,000 tons. This would make it the largest copper producer in the world. (2)American Smelting is spending some 32 million on development of properties of Lake Asbestos of Quebec Ltd. This will give American Smelt- ing an important stake in the Asbestos field. Initial output is to be 100,000 tons of asbestos'annually with production commencing in mid-1958. (3)The company owns 52 of Mount Isa Mines Ltd. of Australia which is actively developing lead, zinc and copper properties. A five-year program is expected to triple output here by 1961. ' (4)As a background to the above, the long term outlook for the world copper price appears considerably better than does the shorter term out- look. Over the next five years world output is expected to increase 20. Wopld demand is expected to double over the same period. It seems hard to foresee continued declining prices against this background. As may be seen from the above, American Smelting's long-range future appears extremely bright. It is,- in addition-,fairlywell insulated against further near term copper price weakness by its large commitment to custom smelting which is less affected by price levels than operations. Other plus items in the picture include a favorable balance sheet position and heavy investments in other companies, including 35 of Revere Copper, 34 of General Cable, 14 of Cerro de Pasco and hold- ings of Kennecott and United Park City Mines. Technical extremely good with a long range potential of 90-110 and support just under the current market. An ample yield is afforded on the 3 dividend and the stock is recommended for purchase in growth accounts. AViT/wgs EDMUliD W. TABELL vlAlSTON AND CO. nc.