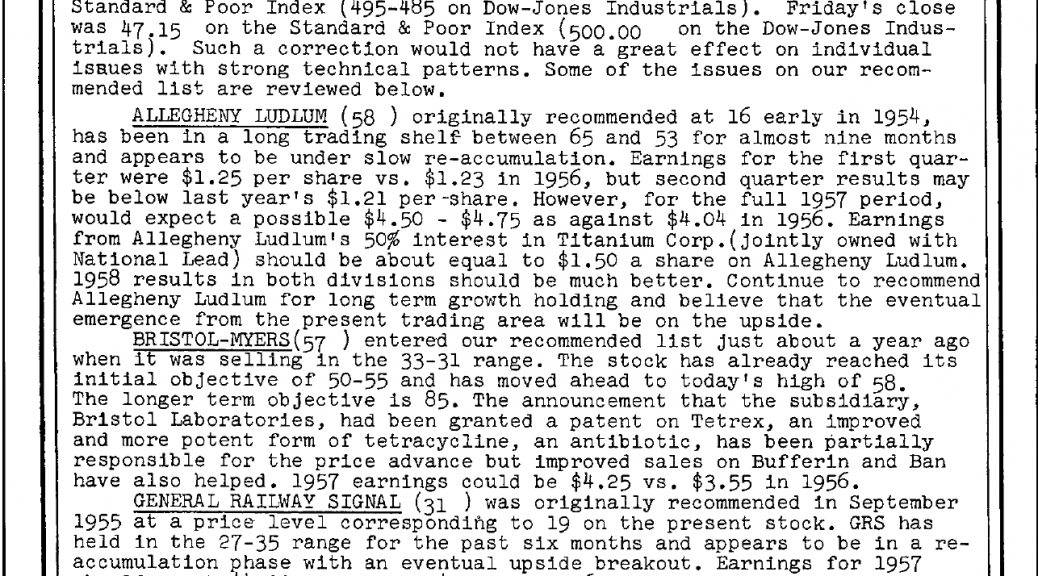 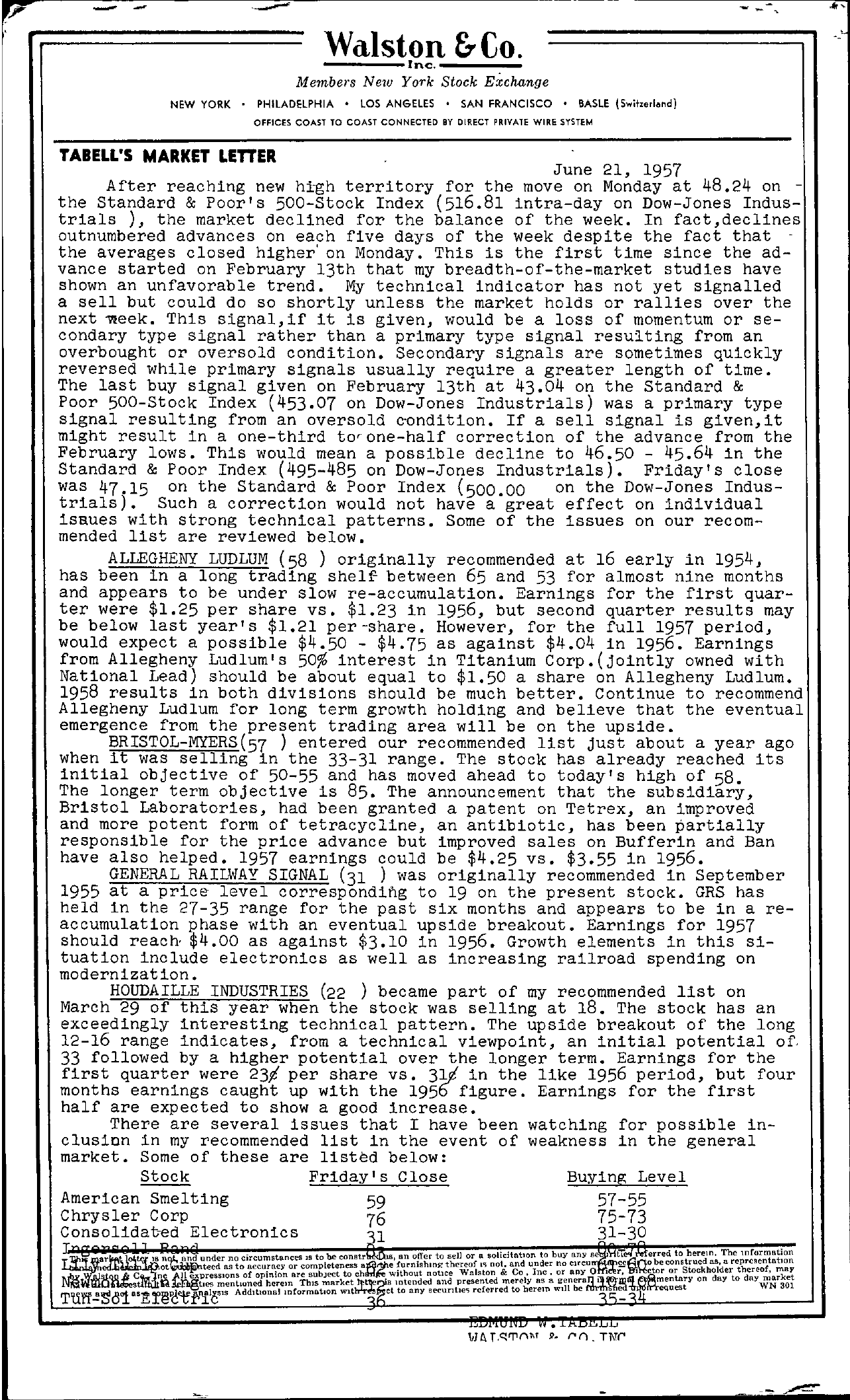 — .Walston &- Co. Inc.— Members New York Stock Exc!uLnge NEW YORK PHILADELPHIA LOS ANGELES SAN FRANCISCO BASLE (SwH,.dMd) OFFICES COAST TO COAST CONNECTED BY DIRECT PRIVATE WIRE SYSTEM TABELL'S MARKET LETTER June 21, 1957 After reaching new high territory for the move on Monday at 48.24 on – the Standard & Poor's 500-Stock Index (516.81 intra-day on Dow-Jones Indus- trials ), the market declined for the balance of the week. In fact,declines outnumbered advances on each five days of the week despite the fact that – the averages closed higher' on Monday. This is the first time since the ad- vance started on February 13th that my breadth-of-the-market studies have shown an unfavorable trend. My technical indicator has not yet signalled a sell but could do so shortly unless the market holds or rallies over the next This signal,if it is given, would be a loss of momentum or se- condary type signal rather than a primary type signal resulting from an overbought or oversold condition. Secondary signals are sometimes quickly reversed while primary signals usually require a greater length of time. The last buy signal given on February 13th at 43.04 on the Standard & Poor 500-Stock Index (453.07 on Dow-Jones Industrials) was a primary type signal resulting from an oversold If a sell signal is given,it might result in a one-third tor one-half correction of the advance from the February lows. This would mean a possible decline to 46.50 – 45.64 in the Standard & Poor Index (495-485 on Dow-Jones Industrials). Friday's close was 47.15 on the Standard & Poor Index (500.00 on the Dow-Jones Indus- trials). Such a correction would not have a great effect on individual isaues with strong technical patterns. Some of the issues on our recom- mended list are reviewed below. ALLEGHENY LUDLUM (58 ) originally recommended at 16 early in 1954, has been in a long trading shelf between 65 and 53 for almost nine months and appears to be under slow re-accumulation. Earnings for the first quar- ter were 1.25 per share vs. 1.23 in 1956, but second quarter results may be below last year's 1.21 per-share. However, for the full 1957 period, would expect a possible 4.50 – 4.75 as against 4.04 in 1956. Earnings from Allegheny Ludlum's 50 interest in Titanium Corp.(jointly owned with National Lead) should be about equal to 1.50 a share on Allegheny Ludlum. 1958 results in both divisions should be much better. Continue to recommend Allegheny Ludlum for long term growth holding and believe that the eventual emergence from the present trading area will be on the upside. BRISTOL-MYERS(57 ) entered our recommended list just about a year ago when it was selling in the 33-31 range. The stock has already reached its initial objective of 50-55 and has moved ahead to today's high of 58. The longer term objective is 85. The announcement that the subsidiary, Bristol Laboratories, had been granted a patent on Tetrex, an improved and more potent form of tetracycline, an antibiotic, has been partially responsible for the price advance but improved sales on Bufferin and Ban have also helped. 1957 earnings could be 4.25 vs. 3.55 in 1956. GENERAL RAILWAY SIGNAL (31 ) was originally recommended in September 1955 at a price level corresponding to 19 on the present stock. GRS has held in the 27-35 range for the past six months and appears to be in a re- accumulation phase with an eventual upside breakout. Earnings for 1957 should reach 4.00 as against 3.10 in 1956. Growth elements in this situation include electronics as well as increasing railroad spending on modernization. HOUDAILLE INDUSTRIES (22 ) became part of my recommended list on March 29 of this year when the stock was selling at 18. The stock has an exceedingly interesting technical pattern. The upside breakout of the long 12-16 range indicates, from a technical viewpoint, an initial potential of. 33 followed by a higher potential over the longer term. Earnings for the first quarter were 231 per share vs. 31i in the like 1956 period, but four months earnings caught up with the 195b figure. Earnings for the first half are expected to show a good increase. There are several issues that I have been watching for possible inclusion in my recommended list in the event of weakness in the general market. Some of these are listed below Stock Friday's Close Buying Level American Smelting Chrysler Corp 59 57-55 76 75-73 31 . 3132 . ed.ii TJ.\JJU\I ffw!aSaJIuClo3oGA1esC nc J.!l underans otociarcccuumrsatctylnocrescaISmtpo,beteeness ij,apresslons of opinion I1re subJect to mentIOned herem ThIS market ttt13e AddltIonli1 lllformatlon o.ffhf UfnlS to ts ellreoarf a 1; no . 0 – '8'iQ t Stockholder thereof may notice Walston & COl' Inc, or anYn on day to day -i'i;'.B mtended and presented mere y as a et to any secuntleo; referred to hereIn wIll be . t eques WN 301 —