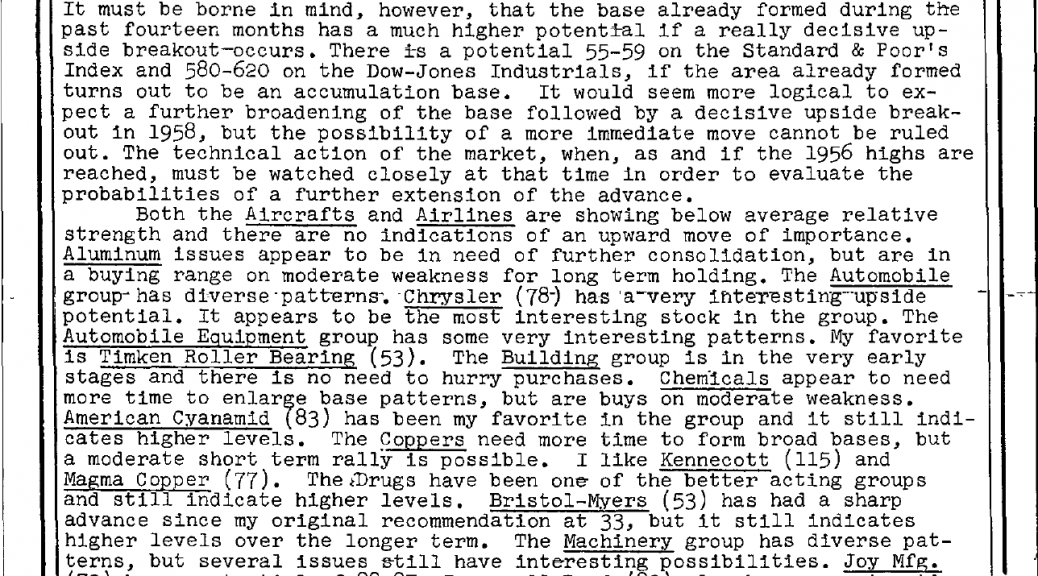 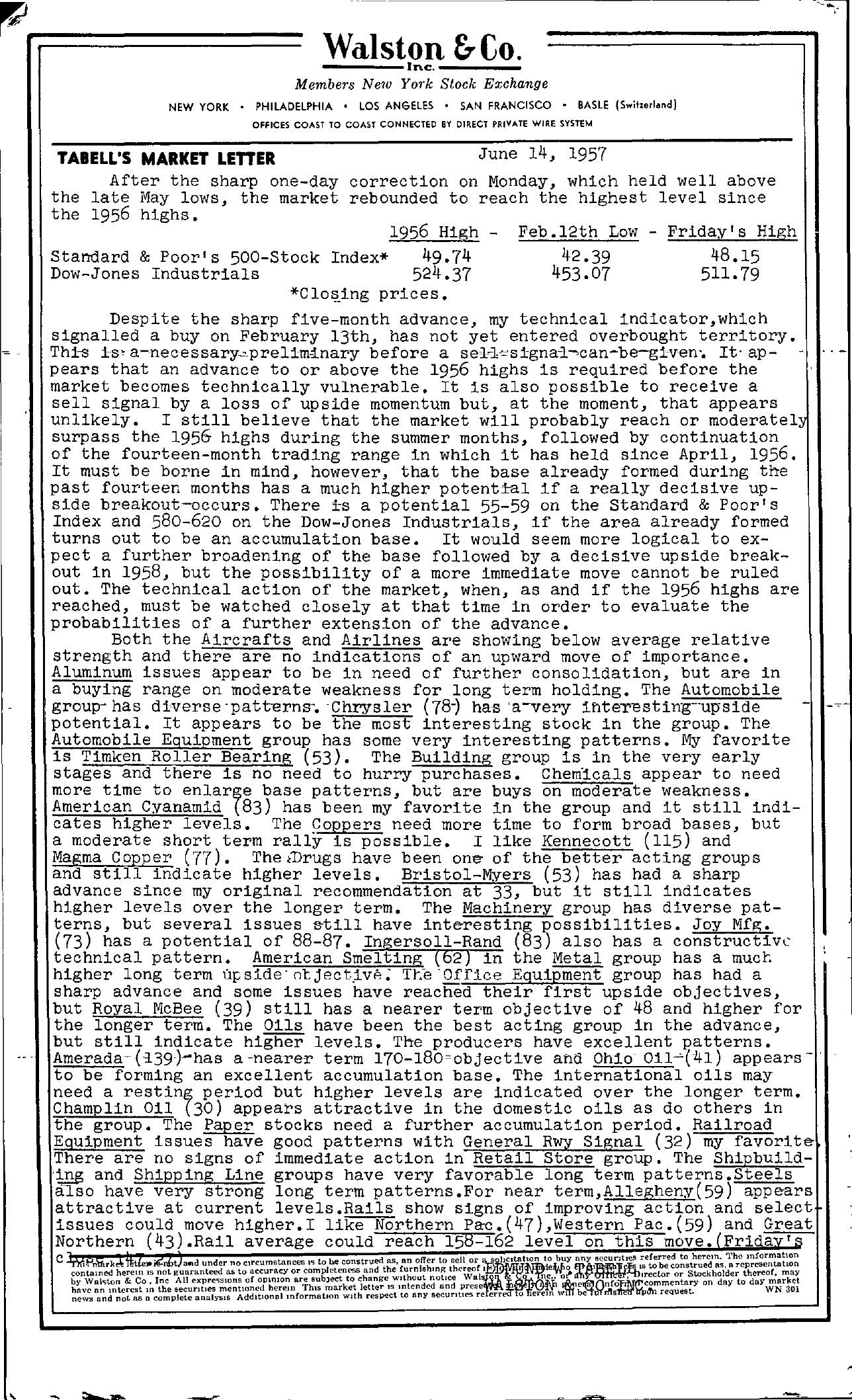 Walston &Co. Inc. Members New York Stock Exchange NEW YORK PHILADELPHIA LOS ANGELES SAN FRANCISCO BASLE (Swawlaod) OFFICES COAST TO COAST CONNECTED BY DIRECT PRIVATE WIRE SYSTEM TABELL'S MARKET LEnER June 14, 1957 After the sharp one-day correction on Monday, which held well above the late May lows, the market rebounded to reach the highest level since the 1956 highs. 1956 High – Feb.12th Low – Friday's High Standard & Poor's 500-Stock Index 49.74 Dow-Jones Industrials 524.37 Cloiing prices. 42.39 453.07 48.15 511.79 Despite the sharp five-month advance, my technical indicator, which signalled a buy on February 13th, has not yet entered overbought territory. Thi-s a-necessary-,,-prelim'inary before a It- ap- – pears that an advance to or above the 1956 highs is required before the market becomes technically vulnerable. It is also possible to receive a sell signal by a loss of upside momentum but, at the moment, that appears unlik surpa ely. ss the I 1 still 956 hi believe ghs dur that ing th the mark e summer et will months , p robably followed r ebaychcoonrtinmuoadteiorantelJ of the fourteen-month trading range in which it has held since April, 1956. It must be borne in mind, however, that the base already formed during the past fourteen months has a much higher potental if a really decisive upside breakout-occurs. There s a potential 55-59 on the Standard & Poor's Index and 580-620 on the Dow-Jones Industrials, if the area already formed turns out to be an accumulation base. It would seem more logical to ex- pect a further broadening of the base followed by a decisive upside break- out in 1958, but the possibility of a more immediate move cannot be ruled out. The technical action of the market, when, as and if the 1956 highs are reached, must be watched closely at that time in order to evaluate the probabilities of a further extension of the advance. Both the Aircrafts and Airlines are showing below average relative strength and there are no indications of an upward move of importance. Aluminum issues appear to be in need of further consolidation, but are in a buying range on moderate weakness for long term holding. The Automobile group- has diverse -patt-erns-.Chrysler (78-) has 'a-very inte-r-esting upside 'potential. It appears to be the most interesting stock in the group. The Automobile Equipment group has some very interesting patterns. My favorite is Timken Roller Bearing (53). The Building group is in the very early stages and there is no need to hurry purchases. Chem-icals appear to need more time to base patterns, but are buys on moderate weakness. American Cyanamid (83) has been my favorite in the group and it still indicates higher levels. The Coppers need more time to form broad bases, but a moderate short term rally is possible. I like Kennecott (115) and Magma Copper (77). The,Drugs have been of the better acting groups and still indicate higher levels. Bristol-Myers (53) has had a sharp advance since my original recommendation at 33, but it still indicates higher levels over the longer term. The Machinery group has diverse pat- terns, but several issues have possibilities. Joy Mfg. (73) has a potential of 88-87. Ingersoll-Rand (83) also has a constructive technical pattern. American Smelting (62) in the Metal group has a muct higher long term Ite-Office Equipment group has had a sharp advance and some issues have reached their first upside objectives, but Royal McBee (39) still has a nearer term objective of 48 and higher for the longer term. The Oils have been the best acting group in the advance, but still indicate higher levels. The producers have excellent patterns. Amerada- (-l39)-has a -nearer term ahd Ohio Oil appears – , to be forming an excellent accumulation base. The international oils may need a period but higher levels are indicated over the longer term. Champlin Oil (30) appears attractive in the domestic oils as do others in the group. The Paper stocks need a further accumulation period. Railroad Equipment issues have good patterns with General Rwy Signal (32) my There are no signs of immediate action in Retail Store group. The Shipbuilding and Shipping Line groups have very favorable long term patterns.Steels alSO have very strong long term patterns.For near term,AlleghenY(59) appears attractive at current levels.Rails show signs of improving action and select issues could move higher.I like Northern Pac. (47),Western Pac. (59) (and Great Northern (43).Rail average could reach 158-162 level on this move. c …d under no circumstances I' to he construed as, an offer to sell or bCltUhnoto buy any IS not guaranteed as to accuracy or completeness and the furnishlnp; thereof I b)' W81'ton & Co. Inc All exprC'SlOns of opInion arc subJect to change Wal hnoevwesalnindInntoert eusst amctohmepsleectue raintiaelYs SmIsentAIOddnietdiohnearleiinnfoTrhmiSatmioanrwkeitthlertetespr eIcSt mtoteanny sefciunritpiersesree errc 0 crCnR1in'1t'.'W;'IiN bee'1lu)rlI or Stockhol'der thereof may on day to daY rrarket srequest WN 301