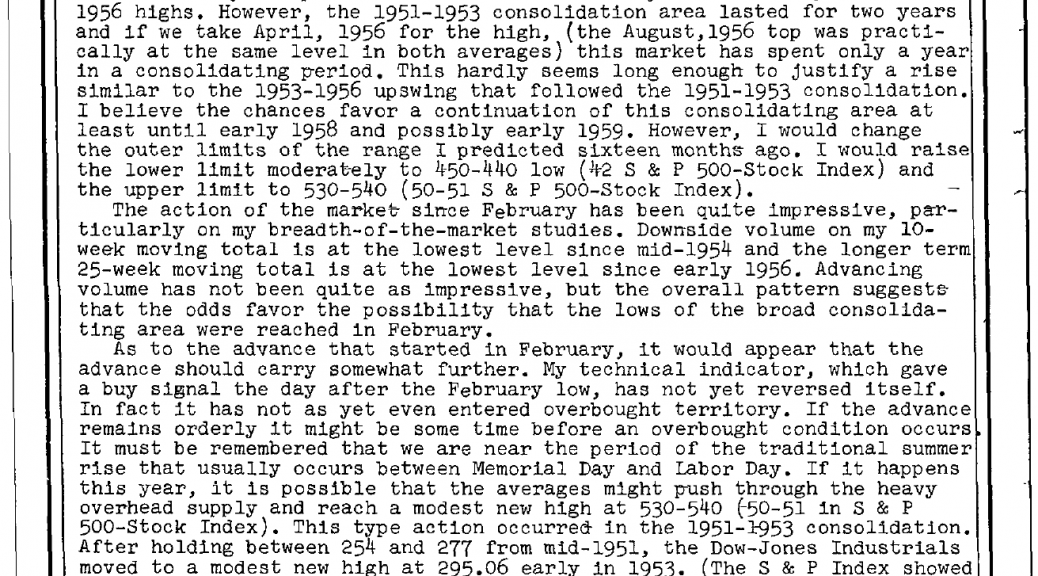 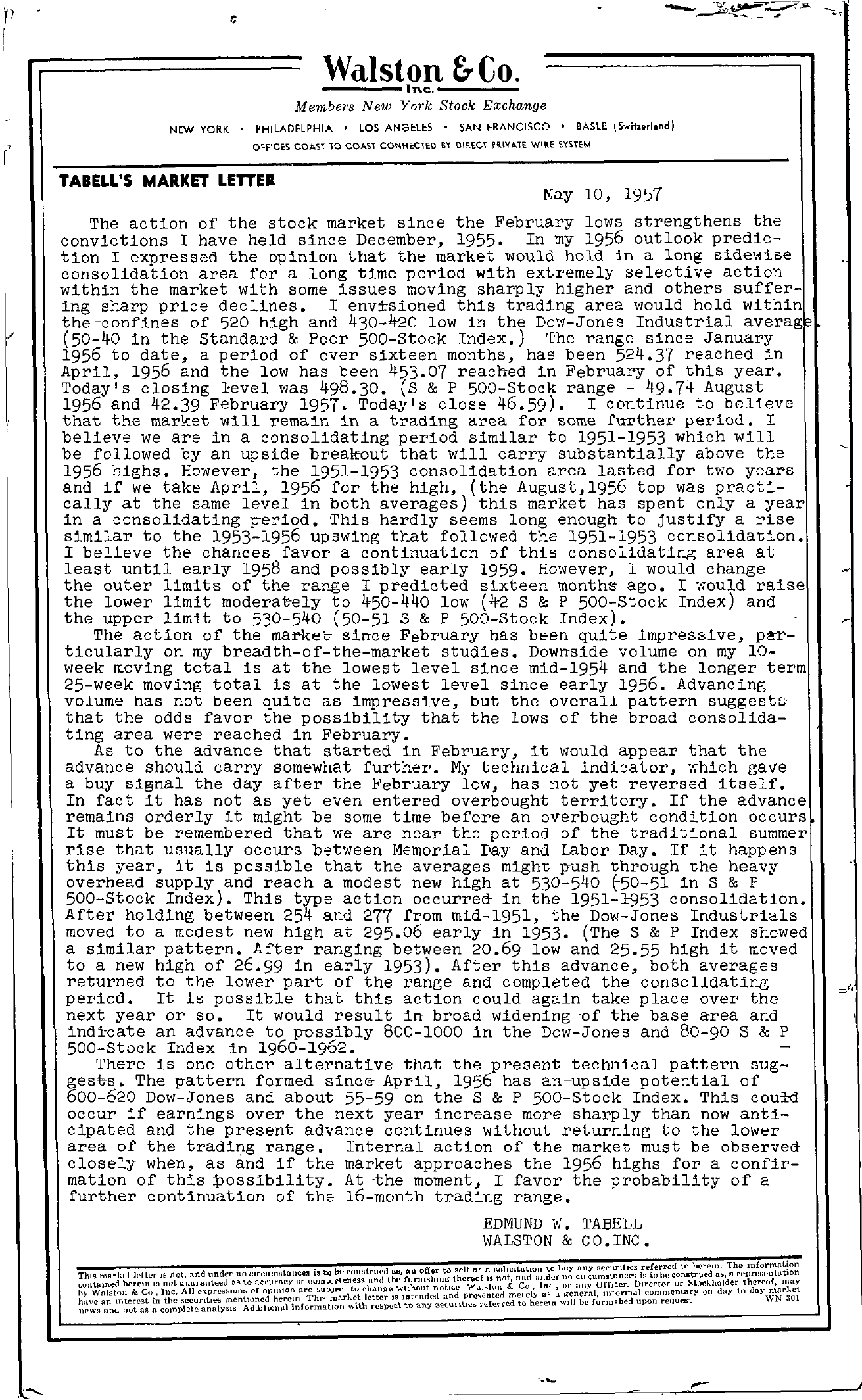 r , Wdlston &- Co. Inc. Members New Y01'k Stock Exchange NEW YORK PHILADELPHIA LOS ANGELES SAN FRANCISCO BASLE (Sw;t,Id) OFFICE COASI TO COAST CONNECTEO BY OIP-E.el WIRE. SYSTE.M TABELL'S MARKET LETTER May 10, 1957 The action of the stock market since the February lows strengthens the convictions I have held since December, 1955. In my 1956 outlook predic- tion I expressed the opinion that the market would hold in a long sidewise consolidation area for a long time period with extremely selective action within the market with some issues moving sharply higher and others suffer- ing sharp price declines. I envrsioned this trading area would hold within the-confines of 520 high and 430-420 low in the Dow-Jones Industrial averag / (50-40 in the Standard & Poor 500-Stock Index.) The range since January 1956 to date, a period of over sixteen months, has been 524.37 reached in April, 1956 and the low has been 453.07 reached in February of this year. Today's closing level was 498.30. (S & P 500-Stock range – 49.74 August 1956 and 42.39 February 1957. Today's close 46.59). I continue to believe that the market will remain in a trading area for some further period. I believe we are in a consolidating period similar to 1951-1953 which will be followed by an upside breakout that will carry substantially above the 1956 highs. However, the 1951-1953 consolidation area lasted for two years and if we take April, 1956 for the high, (the August,1956 top was practi- cally at the same level in both averages) this market has spent only a year in a consolidating veriod. This hardly seems long enough to justify a rise similar to the 1953-1956 upswing that followed the 1951-1953 consolidation. I believe the chances favor a continuation of this consolidating area at least until early 1958 and possibly early 1959. However, I would change – the outer limits of the range I predicted sixteen months ago. I would raise the lower limit to 450-440 low S & P 500-Stock Index) and the upper limit to 530-540 (50-51 S & P 500-Stock Index). – The action of the since February has been quite impressive, par- ticularly on my breadth-of-the-market studies. Downside volume on my 10- week moving total is at the lowest level since mid-1954 and the longer term 25-week moving total is at the lowest level since early 1956. Advancing volume has not been quite as impressive, but the overall pattern suggestfr that the odds favor the possibility that the lows of the broad consolida- ting area were reached in February. As to the advance that started in February, it would appear that the advance should carry somewhat further. My technical indicator, which gave a buy Signal the day after the February low, has not yet reversed itself. In fact it has not as yet even entered overbought territory. If the advance remains orderly it might be some time before an overbought condition occurs It must be remembered that we are near the period of the traditional summer rise that usually occurs between Memorial Day and labor Day. If it happens this year, it is possible that the averages might vush through the heavy overhead supply and reach a modest new high at 530-540 f50-51 in S & P 500-Stock Index). This type action occurred in the 1951-1953 consolidation. After holding between 254 and 277 from mid-1951, the Dow-Jones Industrials moved to a modest new high at 295.06 early in 1953. (The S & P Index showed a similar pattern. After ranging between 20.69 low and 25.55 high it moved to a new high of 26.99 in early 1953). After this advance, both averages returned to the lower part of the range and completed the consolidating period. It is possible that this action could again take place over the next year or so. It would result in broad widening -of the base area and an advance to VQssibly 800-1000 in the Dow-Jones and 80-90 S & p 500-Stock Index in 1960-1962. – There is one other alternative that the present technical pattern sug- The vattern formed since April, 1956 has an-upside potential of 600-620 Dow-Jones and about 55-59 on the S & P 500-Stock Index. This couId occur if earnings over the next year increase more sharply than now anti- Cipated and the present advance continues without returning to the lower area of the trading range. Internal action of the market must be observed closely when, as and if the market approaches the 1956 highs for a confir- mation of this At the moment, I favor the probability of a further continuation of the 16-month trading range. EDMUND W. TABELL WALSTON & CO. INC. h hlnf 8.ThiS mark LUntllllled et letter herem IS IS n not, Rnd under no Clrcumatnnces ot Iuaranteed ao; to nccurflcy or c IS to ompl be cons eteness trlnuli d t ff fan 0 c r to sell or n soliCitatIOn to buy any securitIes referred to herclIl. The mformllt!on th r r IS not and under TIn CLI cumstunceo; is to be construed no., tI representntlOll e I t n Co Ine or flny Officer Director or Stockholder thereof. may h) hntel Wnlston & C wy es aann dl l lnt eorteasst oai.ncItnohcme. psAleelctlcu(na'ntI(laperlesysSimIlSoenn!AtlodondfeltOdlOplhnnc1urO,CnI!nII, o rm1a'1t mar IOn ' n l WI melei; I-\cnernl, commentary on day to day erecspr elt Ifl) any Se(.l.Ill.tl\!S rd\!rred to herem Will he furnished upon request W -.- J