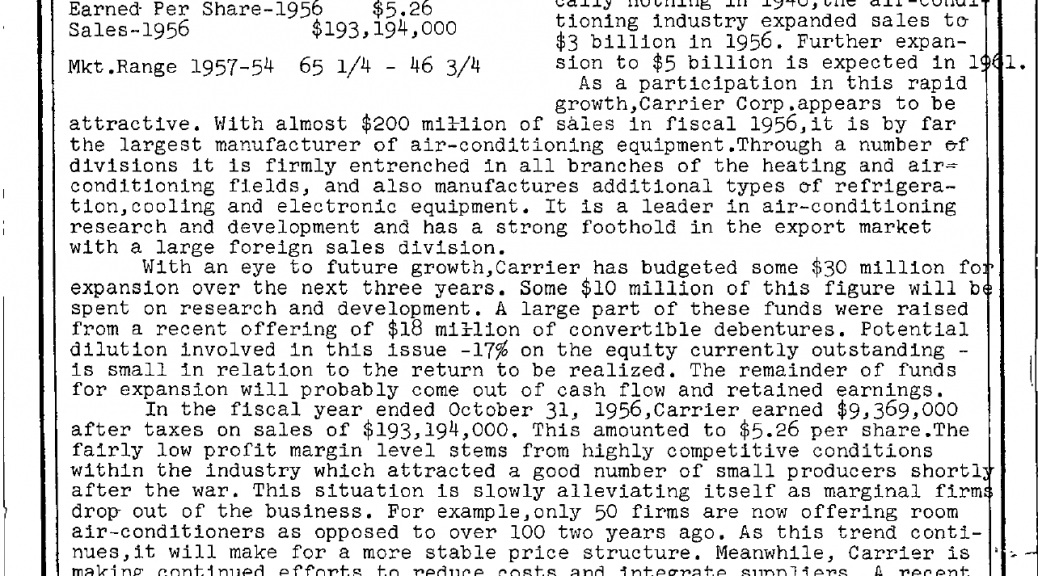 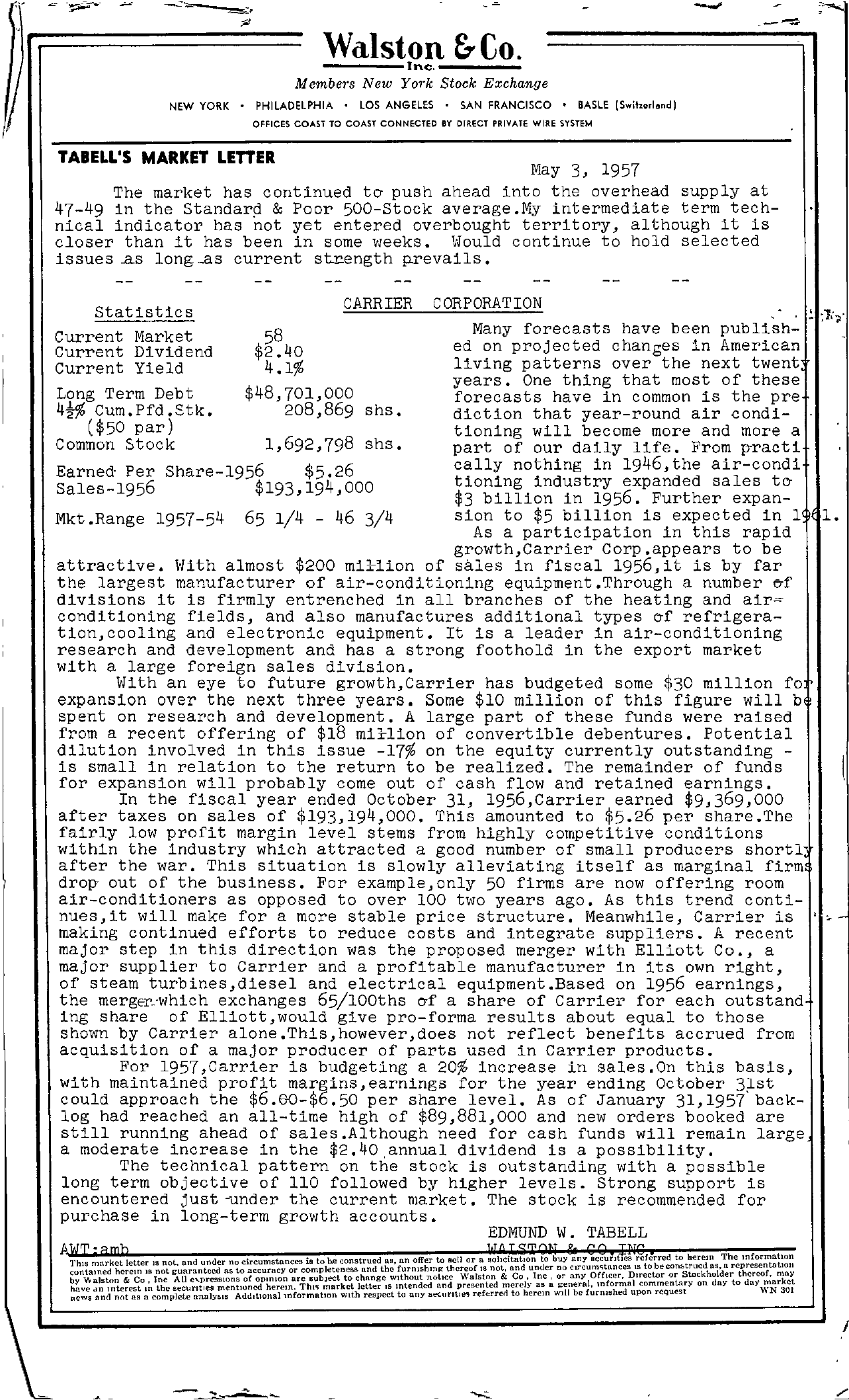 …- r. Walston &- Co. – -…………… Inc………………… Members New York Stock Exchange NEW YORK PHILADELPHIA LOS ANGELES SAN FRANCISCO BASLE ISwit,..I,od) OFFICES COAST TO COAST CONNECTED BY DIRECT PRIVATE WIRE SYSTEM —- TABELL'S MARKET LEnER May 3, 1957 The market has continued ta push ahead into the overhead supply at 47-49 in the Standarp & Poor 500-Stock average.My intermediate term tech- nical indicator has not yet entered overbought territory, although it is closer than it has been in some weeks. \'Jould continue to hold selected issues.as long…as current st.r.ength prevails. Statistics CARRIER CORPORATION , Current Market Current Dividend Current Yield Long Term Debt 4t Cum.Pfd.Stk. 528.40 4.1 48,701,000 208,869 shs. Many forecasts have been published on projected changes in American living patterns over the next twent years. One thing that most of these forecasts have in common is the pre diction that year-round air condi- (50 par) tioning will become more and more a Common Stock 1,692,798 shs. part of our daily life. From Earned Per Share-1956 5.26 Sales-1956 193,194,000 cally nothing in 1946,the air-condi tioning industry expanded sales ta 3 billion in 1956. Further expan- Mkt.Range 1957-54 65 1/4 – 46 3/4 sion to 5 billion is expected in 1 As a participation in this rapid growth,Carrier Corp.appears to be attractive. HUh almost 200 mil-lion of sales in fiscal 1956,u is by far the largest manufacturer of air-conditioning equipment.Through a number ef divisions it is firmly entrenched in all branches of the heating and air conditioning fields, and also manufactures additional types refrigera- tion,cooling and electronic equipment. It is a leader in air-conditioning research and development and has a strong foothold in the export market with a large foreign sales division. Hith an eye to future growth, Carrier has budgeted some 30 million fo expansion over the next three years. Some 10 million of this figure will b spent on research and development. A large part of these funds were raised from a recent offering of 18 million of convertible debentures. Potential dilution involved in this issue -17 on the equity currently outstanding – is small in relation to the return to be realized. The remainder of funds for expansion will probably come out of cash flow and retained earnings. In the fiscal year ended October 31, 1956,Carrier earned 9,369,000 after taxes on sales of 193,194,000. This amounted to 5.26 per share.The fairly low profit margin level stems from highly competitive conditions within the industry which attracted a good number of small producers shortl after the war. This situation is slowly alleviating itself as marginal firm drop out of the business. For example, only 50 firms are now offering room air-conditioners as opposed to over 100 two years ago. As this trend conti- nues,it will make for a more stable price structure. Meanwhile, Carrier is making continued efforts to reduce costs and integrate suppliers. A recent major step in this direction was the proposed merger with Elliott Co., a major supplier to Carrier and a profitable manufacturer in its own right, of steam turbines,diesel and electrical equipment.Based on 1956 earnings, the mergErwhich exchanges 65/100ths O'f a share of Carrier for each outstand ing share of Elliott,would give pro-forma results about equal to those shown by Carrier alone.This,however,does not reflect benefits accrued from acquisition of a major producer of parts used in Carrier products. For 1957,Carrier is budgeting a 20 increase in sales.On this baSiS, with maintained profit margins, earnings for the year ending October 31st could approach the 6.60-6.50 per share level. As of January 31,1957' back- log had reached an all-time high of 89,881,000 and new orders booked are still running ahead of sales.Although need for cash funds will remain large a moderate increase in the 2.40.annual dividend is a possibility. The technical pattern on the stock is outstanding with a possible long term objective of 110 followed by higher levels. Strong support is encountered just -under the current market. The stock is recommended for purchase in long-term growth accounts. EDMUND H. TABELL 1 This mnrkot letter IS not and under no circumstanccs iB to be construed as, un offer to AO!! or a sohcitatiOn to buy any securities rcfcbred to therdn The herein IS not g'uarantcC'd as to accuracy or completeness and the !urnlshmJ1; thcreo! IS not, and undcr no Clrcum;tances IS 0 econr, rue as,11 re resen by ,,alston & Co Inc All e,-preSSiOns of opInion are lIubJect to change without notice Vt'alston & Co, Inc, or any Officer, Director or 61have dn mterest the securltlcs mentIOned herem. Thl'l market letter IS mtended and presented merely as a general, Informal commentary on ay 0 ny Tar news and not as a complete analYSIS Addllional mformatlOn With respect to any Se.IIr1tle'l referred to herem wlil be furnished upon request Vt N 3 \/