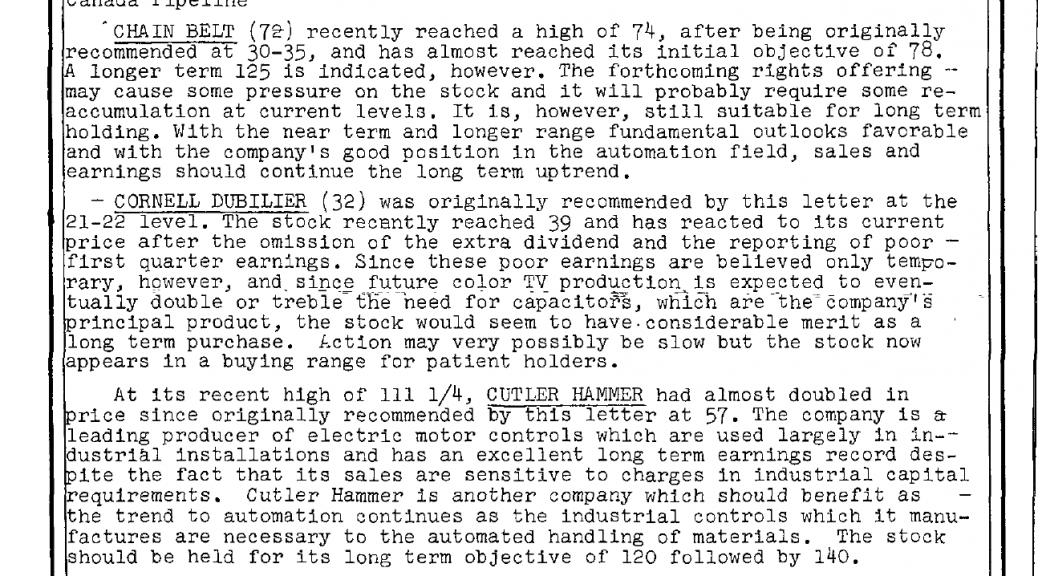 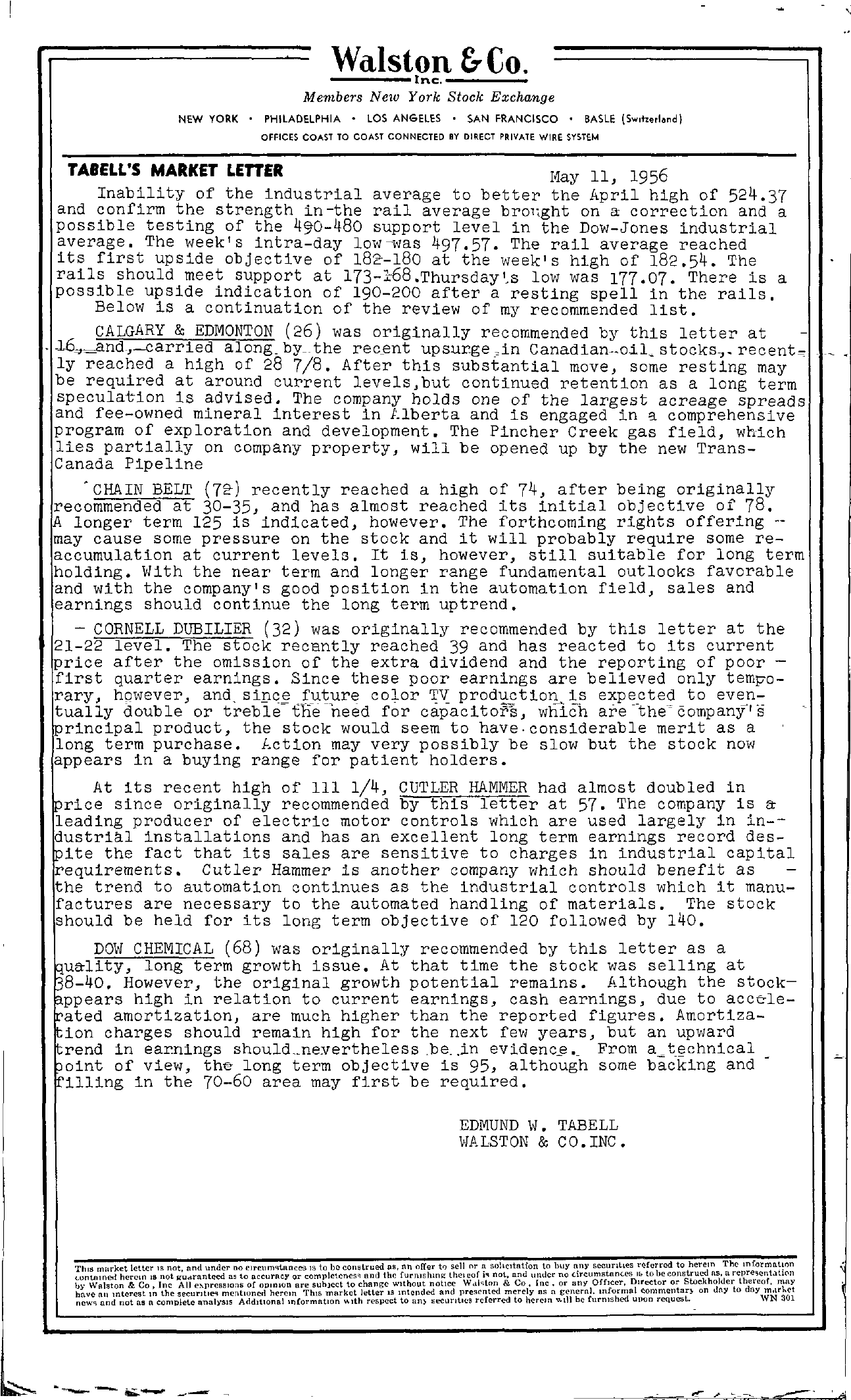 Walston &Co. – – – – – I n c . – – – Members New York Stock Exchange NEW YORK PHILADELPHIA LOS ANGELES SAN FRANCISCO BASLE (Sw,tmld) OFFICES COAST TO COAST CONNECTED DY DIRECT PRIVATE WIRE SYSTEM TABELL'S MARKET LETTER 11ay 11, 1956 Inability of the industrial average to better the April high of 524.37 and confirm the strength in -the rail average brol;ght on a correction and a possible testing of the support level in the Dow-Jones industrial average. The week's intra-day low-was 497.57. The rail average reached its first upside objective of at the week's high of 182.54. The rails should meet support at low was 177.07. There is a possible upside indication of 190-200 after a resting spell in the rails. Below is a continuation of the review of my recommended list. CALGARY & EDMONTON (26) was originally recommended by this letter at – . along by the recent upsur.gecin stocks-,. recent, ly reached a high of 28 7/8. After this substantial move, some resting may be required at around current levels,but continued retention as a long term speculation is advised. The company holds one of the largest acreage spreads and fee-owned mineral interest in t.lberta and is engaged in 'l. comprehensive program of exploration and development. The Pincher Creek gas field, which lies partially on company property, will be opened up by the new Trans- Canada Pipeline 'CHAIN BELT recently reached a high of 74, after being originally recommended at 30-35, and has almost reached its initial objective of 78. A longer term 125 is indicated, however. The forthcoming rights offering -. may cause some pressure on the stock and it will probably require some re- accumulation at current levels. It is, however, still suitable for long term holding. With the near term and longer range fundamental outlooks favorable and with the company's good position in the automation field, sales and earnings should continue the long term uptrend. – CORNELL DUBILIER (32) was originally recommended by this letter at the 21-22 level. The stock recently reached 39 and has reacted to its current price after the omission of the extra dividend and the reporting of poor – first quarter earnings. Since these poor earnings are believed only tempo- rary, hQwever, and, future color TV production is expected to even- tually double or treble- ffle –need for capacitors, Which are –the 0 company's principal product, the stock would seem to have. considerable merit as a long term purchase. J..ction may very possibly be slow but the stock now appears in a buying range for patient holders. At its recent high of III 1/4, CUTLER HAMMER had almost doubled in rrice since originally recommended by this letter at 57. The company is a leading producer of electric motor controls which are used largely in in-dustrial installations and has an excellent long term earnings record desrite the fact that its sales are sensitive to charges in industrial capital requirements. Cutler Hammer is another company which should benefit as – the trend to automation continues as the industrial controls which it manufactures are necessary to the automated handling of materials. The stock should be held for its long term objective of 120 followed by 140. DOW CHEMICAL (68) was originally recommended by this letter as a quality, long term growth issue. At that time the stock was selling at B8-40. However, the original growth potential remains. Although the stockappears high in relation to current earnings, cash earnings, due to accelerated amortization, are much higher than the reported figures. Amortiza- charges should remain high for the next few years, but an upward in ear.nings should nevertheless ,be, .in evidenc.e. From point of view, the long term objective is 95, although some backing and in the 70-60 area may first be required. EDMUND W. TABELL 1J.fALSTON & CO. INC. Thl!l mllrket letter IS not, lind under no ClTcurnl,.llnces IS to be construed liS, nn offer tlJ sell or a soliCitation to buy any securities to herem The mformnt!on byonU Ined herem IS not gUlrnnteed I1S to nccurncy or and the thel eor i'l nol, nml under no .ireumslnn(.es I!, to he construed flS, u Walston & Co Inc All ClI.preS51ons of opinIOn are suhJect to change Without notice ,,',\I;ton & Co. Inc. or any Officer, Director or Stockholder therl!of. mny have fill mter(!'St the seeur-Itlel hereH\ ThiS market letter B Intended and presented merely as a genernl. Informnl commentarJ, on Joy to day m.lrl-ct new'! and not us n complete analYSIS AdditIOnal InformatIOn …. Ith respect to an) securities referred to herem v. III be furmshed upon request. ''IN 301