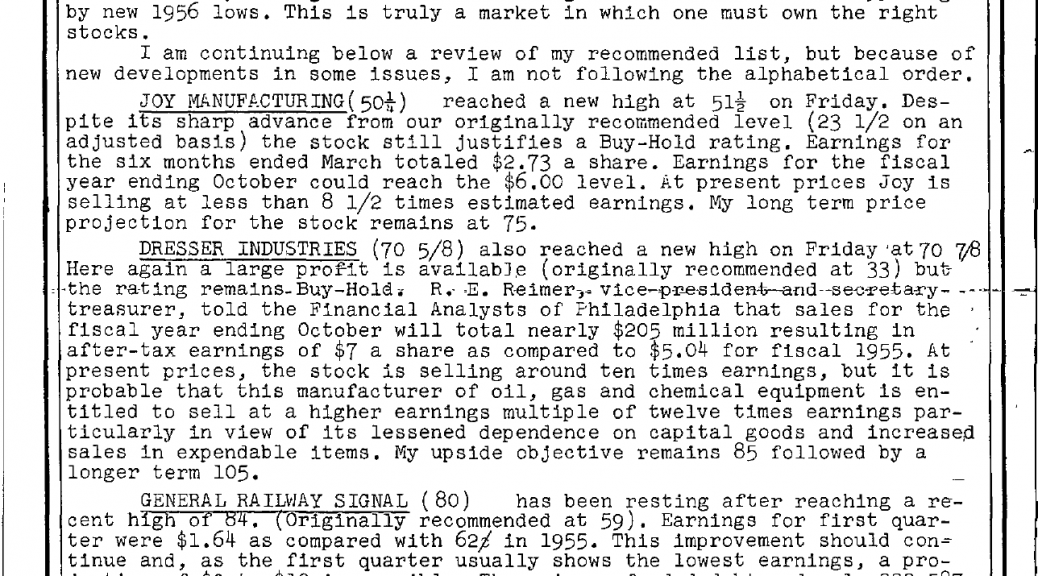 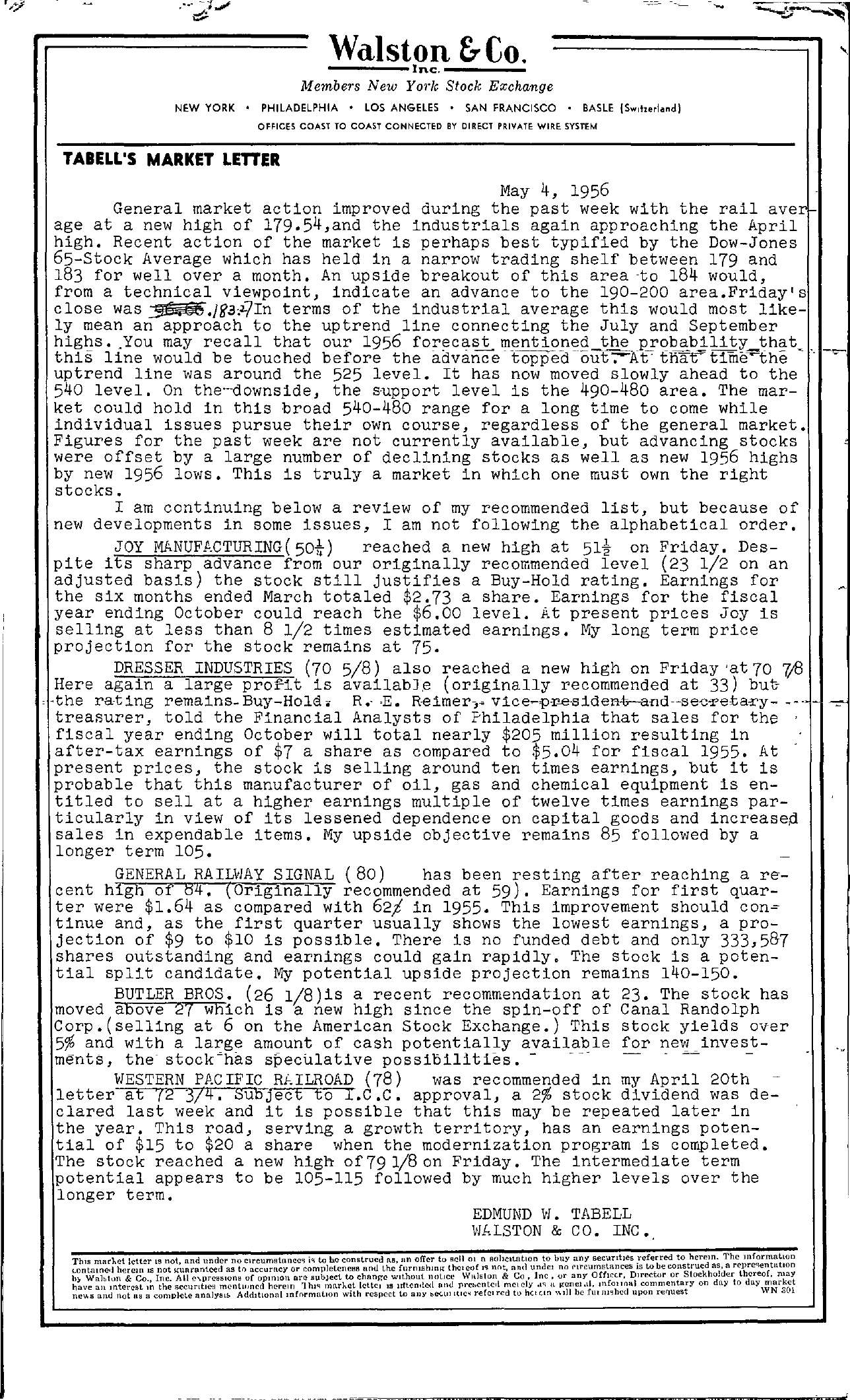 —- NEW YORK Walston &Co. —-Inc — Members New YOl-k Stock Exchange PHILADELPHIA' LOS ANGELES SAN FRANCISCO BASLE (Sw,j,,dl OFFICES COAST TO COAST CONNECTED BY DIRECT PRIVATE WIRE SYSTEM TABELL'S MARKET LEnER May 4, 1956 General market action improved during the past week with the rail aver age at a new high of 179.54,and the industrials again approaching the April high. Recent action of the market is perhaps best typified by the Dow-Jones 65-Stock Average which has held in a narrow trading shelf between 179 and 183 for well over a month. An upside breakout of this area to 184 would, from a technical viewpoint, indicate an advance to the 190-200 area.Friday's close was terms of the industrial average this would most like- ly mean an approach to the uptrend line connecting the July and September highs .You may recall that our 1956 forecast mentioned the probability that this line would be touched before the tnattffue''the – — -.,- uptrend line was around the 525 level. It has now moved slowly ahead to the 540 level. On the-downside, the s-upport level is the 490-480 area. The mar- ket could hold in this broad 540-480 range for a long time to come while individual issues pursue their own course, regardless of the general market. Figures for the past week are not currently available, but advancing stocks were offset by a large number of declining stocks as well as new 1956 highs by new 1956 lows. This is truly a market in which one must own the right stocks. I am continuing below a review of my recommended list, but because of new developments in some issues, I am not following the alphabetical order. JOY MANUFACTURING ( 50t) reached a new high at on Friday. Des- pite its sharp advance from our originally recommended level (23 1/2 on an adjusted basis) the stock still justifies a Buy-Hold rating. Earnings for the six months ended March totaled 2.73 a share. Earnings for the fiscal year ending October could reach the 6.00 level. At present prices Joy is selling at less than 8 1/2 times estimated earnings. My long term price projection for the stock remains at 75. DRESSER INDUSTRIES (70 5/8) also reached a new high on Friday'at 70 7;8 Here again a large profit is availabJ ,e (originally recommended at 33) but7 . the rat ing remains. Buy-Ho lelo R.-E. Re vic id ent–and se-cpe.ta.-ry- .' – -I treasurer, told the Financial Analysts of Philadelphia that sales for the fiscal year ending October will total nearly 205 million resulting in after-tax earnings of 7 a share as compared to 5.04 for fiscal 1955. At present prices, the stock is selling around ten times earnings, but it is probable that this manufacturer of oil, gas and chemical equipment is entitled to sell at a higher earnings multiple of twelve times earnings particularly in view of its lessened dependence on capital goods and increasep sales in expendable items. My upside objective remains 85 followed by a longer term 105. GENERAL RAILVIAY SIGNAL (80) has been resting after reaching a recent high of 84. (Originally recommended at 59). Earnings for first quarter were 1.64 as compared with 62 in 1955. This improvement should con tinue and, as the first quarter usually shows the lowest earnings, a projection of 9 to 10 is possible. There is no funded debt and only 333,587 shares outstanding and earnings could gain rapidly. The stock is a potential split candidate. My potential upside projection remains 140-150. BUTLER BROS. (26 1/8)is a recent recommendation at 23. The stock has moved above 2' which is a new high since the spin-off of Canal Randolph Corp.(selling at 6 on the American Stock Exchange.) This stock yields over 5 and with a large amount of cash potentially available for new invest- ments, the stockhas possiBilities. ..' WESTERN PAC IFIC RJ-.ILROAD (78) was recommended in my April 20th letter at (2 3/4. SUBject to I.C.C. approval, a 2 stock dividend was de- clared last week and it is possible that this may be repeated later in the year. This road, serving a growth territory, has an earnings potential of 15 to 20 a share when the modernization program is completed. The stock reached a new high of 791/8 on Friday. The intermediate term potential appears to be 105-115 followed by much higher levels over the longer term. EDMUND \II. TABELL \IIJ..lSTON & CO. INC. Thu; marhet Iett2r IS not, and under no Clrcumstnnce') i'l to he const.rued aB, nn offer to sell 01 a AoliClt.atlOn to buy aoy secunhes .referred to herem. The mformat.lon Lootmoe. herelll IS not I!ullrantced as to accuracy or lind thc furnlShlllR thelcnf I' I\ot, and undel no ('\rcumstances IS to be construed as, a repre'lentll.tlOn h Wabtun & Co Inc AU C'l.prCSSlOns of opllliOn arc subJcct to change WIthout IIntlcc Walston & Co, Inc, or any OffICc.r, DIrector or Stockholder thereof, may have all mterest securities men til ned herem '1 hi'! market ettel IS uftcoiled and prebentC,j mCI ely .1; Il J,(eflcl.d, mfOllllaJ commentary on day to tIay mnrkct nev.s and 1I0t flS a complete nnnlysl!. AddltlOnlil mormllt.lOn with respect to allY bC'.UI retci red to hoon ,,111 he fUI upon refuest \VN 301