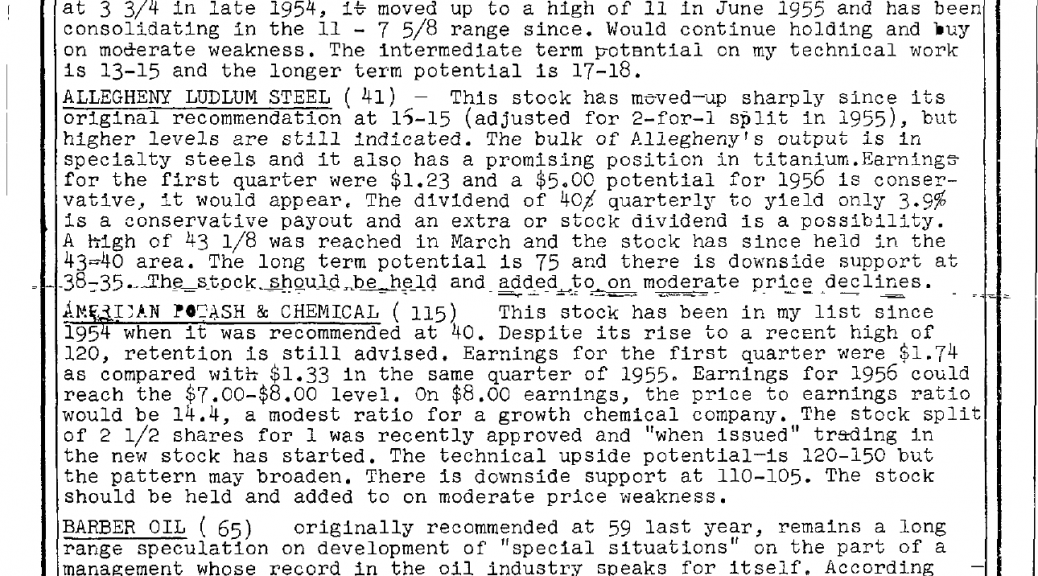 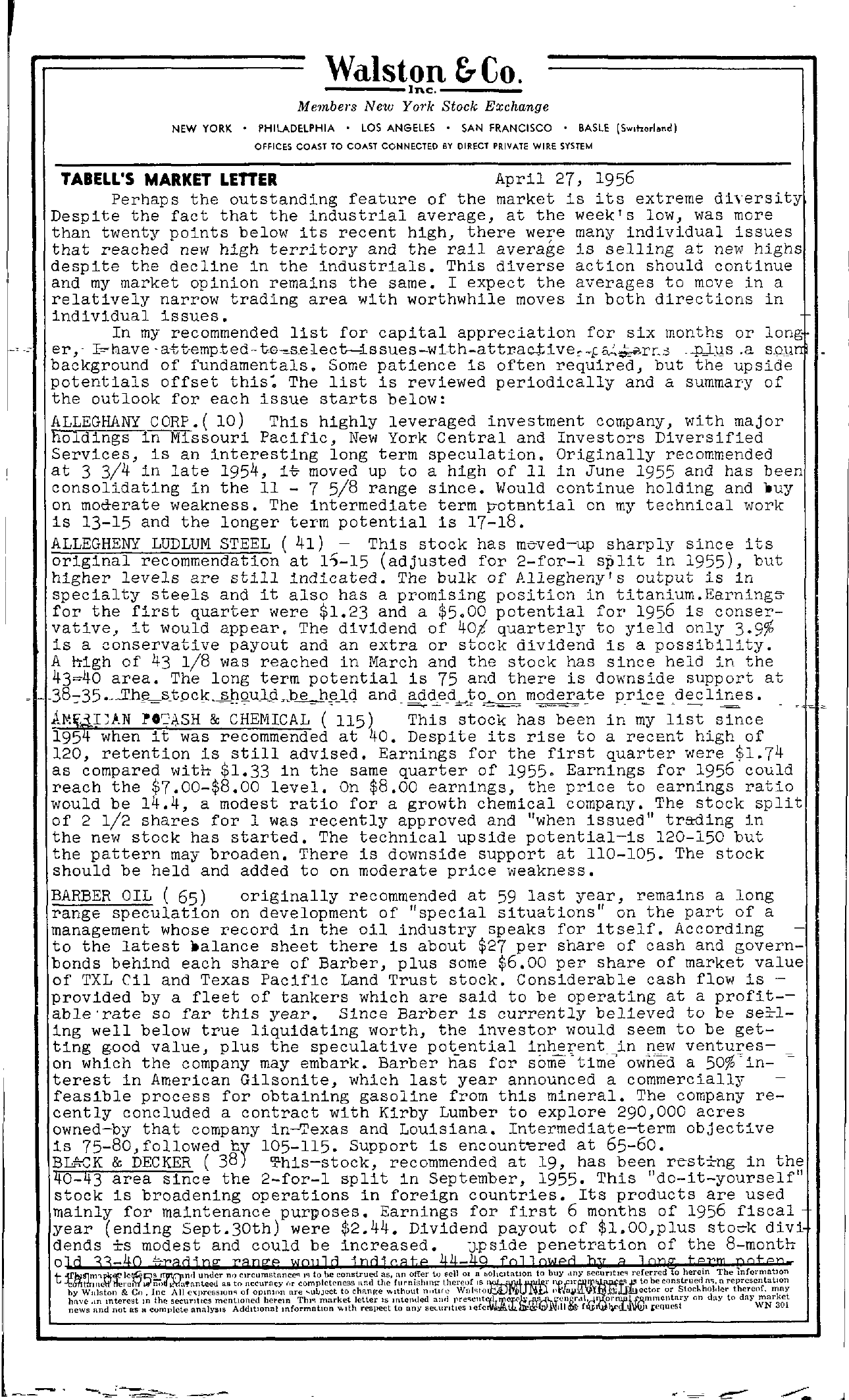 NEW YORK -W–a-lIsntocn,-&– C-o. Members New Y01'k Stock Exchange PHILADELPHIA LOS ANGELES SAN FRANCISCO BASLE (Sw,h.,I.nd) OFFICES COAST TO COAST CONNECTED 8Y DIRECT PRIVATE WIRE SYSTEM TABEll'S MARKET lEnER April 27 J 1956 Perhaps the outstanding feature of the market is its extreme diyersity Despite the fact that the industrial average, at the week's low, was more than twenty pOints below its recent high, there were many individual issues that reached new high territory and the rail average is selling at new highs despite the decline in the industrials. This diverse action should continue and my market opinion remains the same. I expect the averages to move in a relatively narrow trading area with worthwhile moves in both directions in individual issues. In my recommended list for capital appreciation for six months or long er, ,a S.\llJn background of fundamentals. Some patience is often required, but the upside potentials offset this The list is reviewed periodically and a summary of the outlook for each issue starts below ALLEGHANY CORP. ( 10) This highly leveraged investment company, with major nD1dings in Missouri Pacific, New York Central and Investors Diversified Services, is an interesting long term speculation. Originally recommended at 3 3/4 in late 1954, moved up to a high of 11 in June 1955 and has been consolidating in the 11 – 7 5/8 range since. \llould continue holding and IUY on motterate weakness. The intermediate term on my technical work is 13-15 and the longer term potential is 17-18. ALLEGHENY LUDLUM STEEL (41) – This stock has me-ved-up sharply since its original recommendation at 1-15 (adjusted for 2-for-l sp lit in 1955), but higher levels are still indicated. The bulk of Allegheny's output is in specialty steels and it also has a promising position in for the first quarter were 1.23 and a 5.00 potential for 1956 is conser- vative, it would appear, The dividend of 401 quarterly to yield only 3.9 is a conservative payout and an extra or stock dividend is a possibility. A high of 43 1/8 was reached in March and the stock has since held in the 4340 area. The long term potential is 75 and there is downside support at o 38-35..-.T.hf-Lstock- ..-..s-.-.hQuldbe — hS))Q. and – a.d.-de-d to on moderate — price d ec —. l i-n-e s . .oO'';)'SH & CHEMICAL (115) This stock has been in my list Since 195 when it was recommended at 40. Despite its rise to a recent high of 120, retention is still advised. Earnings for the first quarter were 1.74 as compared with 1.33 in the same quarter of 1955. Earnings for 1956 could reach the 7.00-8.00 level. On 8.00 earnings, the price to earnings ratio would be 14.4, a modest ratio for a growth chemical company. T'he stock split of 2 1/2 shares for 1 was recently approved and when issued trading in the new stock has started. The technical upside potential-is 120-150 but the pattern may broaden. There is downside support at 110-105. The stock should be held and added to on moderate price weakness. BARBER OIL (65) originally recommended at 59 last year, remains a long range speculation on development of special situations on the part of a management whose record in the oil industry speaks for itself. According – to the latest lalance sheet there is about 27 per share of cash and govern- bonds behind each share of Barber, plus some 6.00 per share of market value of TXL eil and Texas Pacific Land Trust stock. Considerable cash flow is – provided by a fleet of tankers which are said to be operating at a profit– able'rate so far this year. Since Barber is currently believed to be sezl- ing well below true liquidating worth, the investor would seem to be get- ting good value, plus the speculative potential inherentin new ventures- on which the company may embark. Barber has for some -time' ownea a 50- in- terest in American Gilsonite, which last year announced a commercially – feasible process for obtaining gasoline from this mineral. The company re- cently concluded a contract with Kirby Lumber to explore 290,000 acres owned-by that company and Louisiana. Intermediate-term objective is 75-80,followed hy 105-115. Support is at 65-60. & DECKER (38 ) recommended at 19, has been in the 40-43 area Since the 2-for-l split in September, 1955. This do-it-yourself stock is broadening operations in foreign countries. Its products are used mainly for maintenance purposes. Earnings for first 6 months of 1956 fiscal year (ending Sept.30th) were 2.44. Dividend payout of 1.OO,plus stock divi dends modest and could be increased. Jpside penetration of the 8-month old 33-40 range wQJ1Jd h-rm potAntradjpg indicate followed by a 0letieQs IftJ'ir.llnd under n.) clrcumstllncec 1'1 to he construed as, lin offer tl) Ol II bohCltatlOn to buy my seeuntIc'l referred herem The mformabon t -bMlttn ne'rl'lterelw' t.e n.)U l,).rla9'nnteed as to nccurncy rrr completeness nnd the (II rnishm;- thereof IS n,ot…..AIV.j.l.ll,d,e lo be construeri n;, n reprcsentatlOn by Wnlston & en Inc All cpreSSJQll'l of OPlnlon Ilre …ubJcct to Chll.ll1;e v.lthuut ntlfC Wal'ltoU.4JiVvUNU ur Stockholder thcrer, mny hnvc .In mtcrest secuntlCS mentlOncd herein Thl'l market letter IS Intended and news lind not as a complete anillysis Addltlonnl informatIOn 'Ith r('Speet to any SCLlltltLes ,equcst on day to daY,ml,Nar3ko',' '-