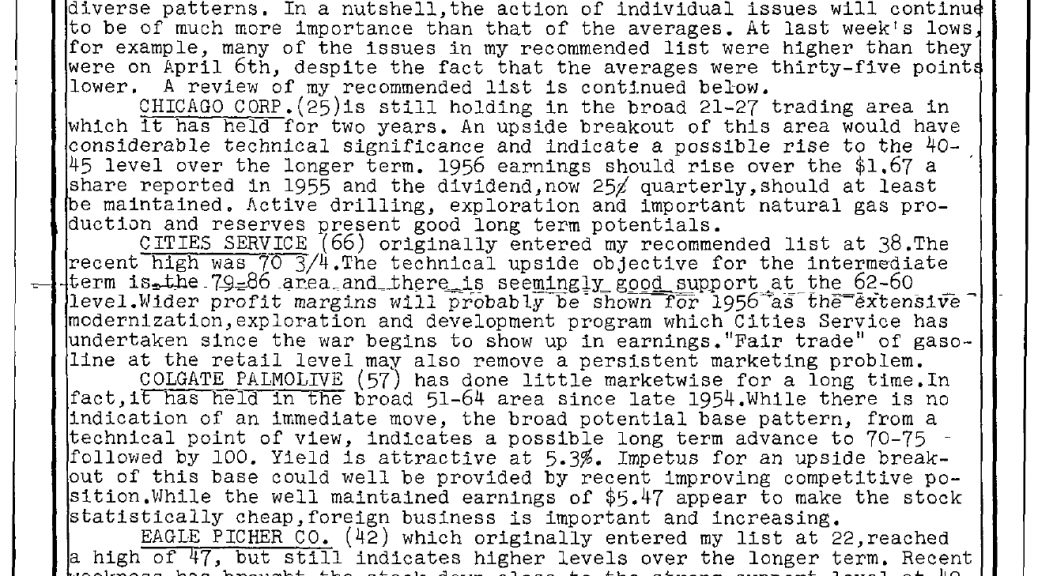 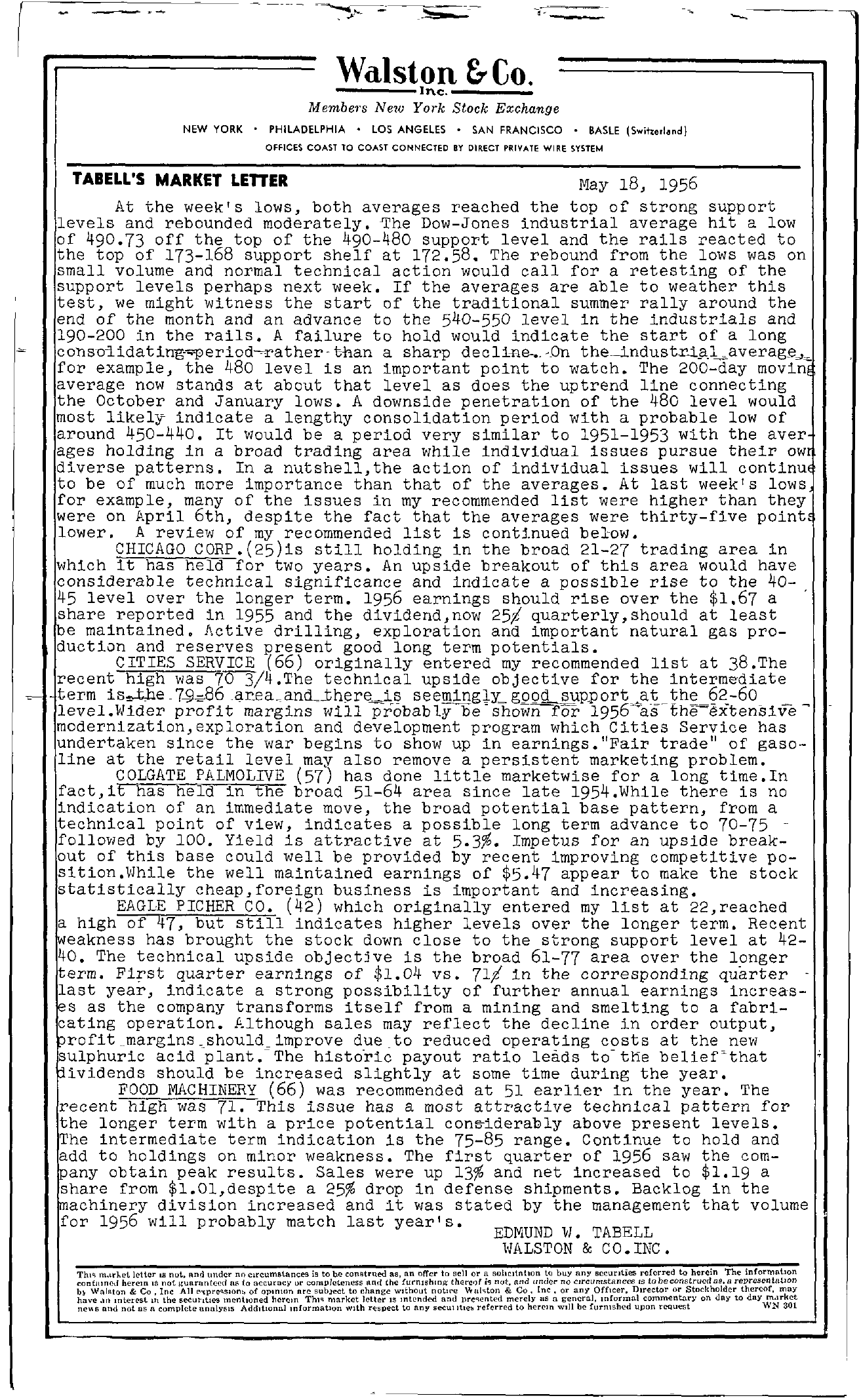 ( NEW YORK Walston &Co. – – – – – – – – I n c . – – MembeTs New York Stock Exchange PHILADELPHIA' LOS ANGELES SAN FRANCISCO BASLE (SwH,Id) OFfiCES COAST TO COAST CONNECTED BY DIRECT PRIVATE WIRe SySTEM TABEll'S MARKET lEnER May 18, 1956 At the week's lows, both averages reached the top of strong support levels and rebounded moderately. Dow-Jones industrial average hit a low of 490.73 off the top of the 490-480 support level and the rails reacted to the top of 173-168 support shelf at 172.58. The rebound from the lows was on small volume and normal technical action would call for a retesting of the support levels perhaps next week. If the averages are able to weather this test, we might witness the start of the traditional summer rally around the end of the month and an advance to the 540-550 level in the industrials and 190-200 in the rails. A failure to hold would indicate the start of a long t-han a sharp .. On for example, the 480 level is an important point to watch. The 200-day movin average now stands at about that level as does the uptrend line connecting the October and January lows. A downside penetration of the 480 level would most likely indicate a lengthy consolidation period with a probable low of around 450-440. It would be a period very similar to 1951-1953 with the aver ages holding in a broad trading area while individual issues pursue their ow diverse patterns. In a nutshell,the action of individual issues will continu to be of much more importance than that of the averages. At last week's lows for example, many of the issues in my recommended list were higher than they were on April 6th, despite the fact that the averages were thirty-five point lower. A review of my recommended list is continued below. CHICAGO CORP.(25)is still holding in the broad 21-27 trading area in which it has held for two years. An upside breakout of this area would have considerable technical significance and indicate a possible rise to the 40- 45 level over the longer term. 1956 earnings should rise over the 1.67 a share reported in 1955 and the dividend,now 257 quarterly,should at least be maintained. Active drilling, exploration and important natural gas pro- duction and reserves present good long term potentials. CITIES SERVICE (66) originally entered my recommended list at 38.The recent high was 70 3!4.The technical upside objective for the intermediate term seeminglygppd support at the 62-60 level. Wider profit margins will pi6bab 10'be – s-howllTor 1956'''ar the-extensi ve – modernization,exploration and development program which Cities Service has undertaken since the war begins to show up in earnings.Fair trade of gaso- line at the retail level may also remove a persistent marketing problem. COLGATE PALMOLIVE (57) has done little marketwise for a long time.ln fact,it has held in the broad 51-64 area since late 1954.While there is no indication of an immediate move, the broad potential base pattern, from a technical point of view, indicates a possible long term advance to 70-75 . followed by 100. Yield is attractive at 5.3. Impetus for an upside break- out of this base could well be provided by recent improving competitive po- sition.While the well maintained earnings of 5.47 appear to make the stock statistically cheap,foreign business is important and increasing. EAGLE PICHER CO. (42) which originally entered my list at 22,reached a high of 47, but still indicates higher levels over the longer term. Recent has brought the stock down close to the strong support level at 42- 40. The technical upside objectjve is the broad 61-77 area over the longer term. First quarter earnings of 1.04 vs. 717 in the corresponding quarter – last year, indicate a strong possibility of further annual earnings increas- es as the company transforms itself from a mining and smelting to a fabri- cating operation. Although sales may reflect the decline in order output, profitmargins,should.improve due.to reduced operating costs at the new sulphuric acid plant.-The historic payout ratio leads totl1.e belierthat dividends should be increased slightly at some time during the year. FOOD MACHINERY (66) was recommended at 51 earlier in the year. The recent high was 71. This issue has a most attractive technical pattern for the longer term with a price potential confriderably above present levels. The intermediate term indication is the 75-85 range. Continue to hold and add to holdings on minor weakness. The first quarter of 1956 saw the com- rany obtain peak results. Sales were up 13 and net increased to 1.19 a share from l.Ol,despite a 25 drop in defense shipments. Backlog in the division increased and it was stated by the management that volume for 1956 will probably match last year's. EDMUND vi. TABELL & CO.INC. Thl'l m.lrl.et letter 18 nut, and under no circumstances is to be construed as, nn ofTer to sell or a sohcltntlOn to buy any securities referred to herein The inforfi1alion contulfi(';.i herem ll not guarnntecd liS aCCUf3CY Uf completlmess nnd the furnnrnlng thQreQf i; nut, and und(r no cIrcumstances IS to beconstrucd as, a reprC8cntlliIDn \l.talston & Co, Inc All l''lpre;Slom, of oplfilUn nrc subJect to change without notu'e vulton & Co, Inc, or any Officer, Director or Stockholder thereof, m3Y have .w mterest In the securitieS mentioned herem Thl'! market letter IS mtended and )lreented merely as a general, mformal eommentary on day to day ne…. s and not as a complete an3lysis AdditIOnal mformatlon with respect to any sccuillieb referred to herein Will be furmshed upon request V. N 301 \