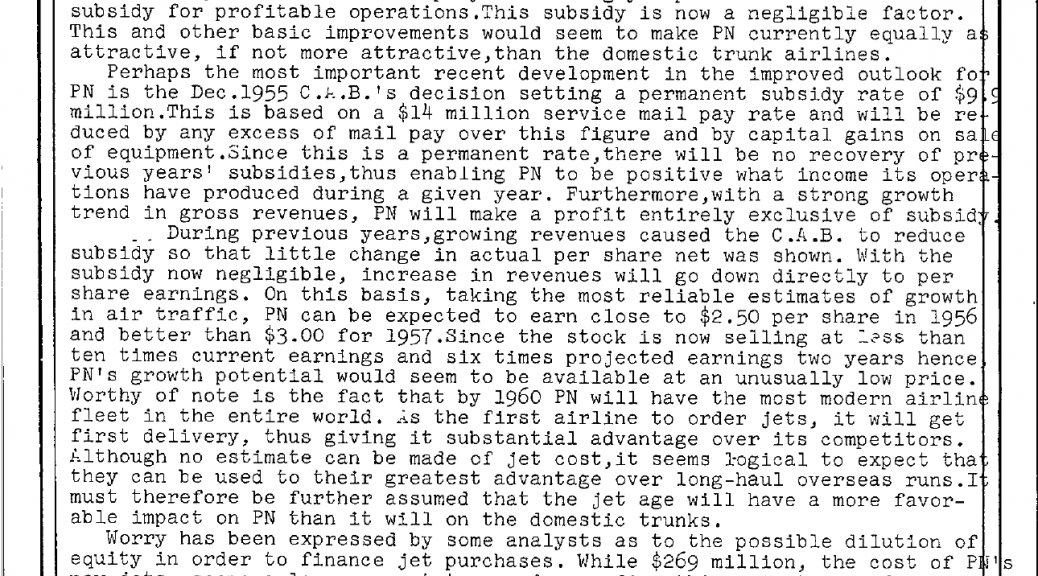 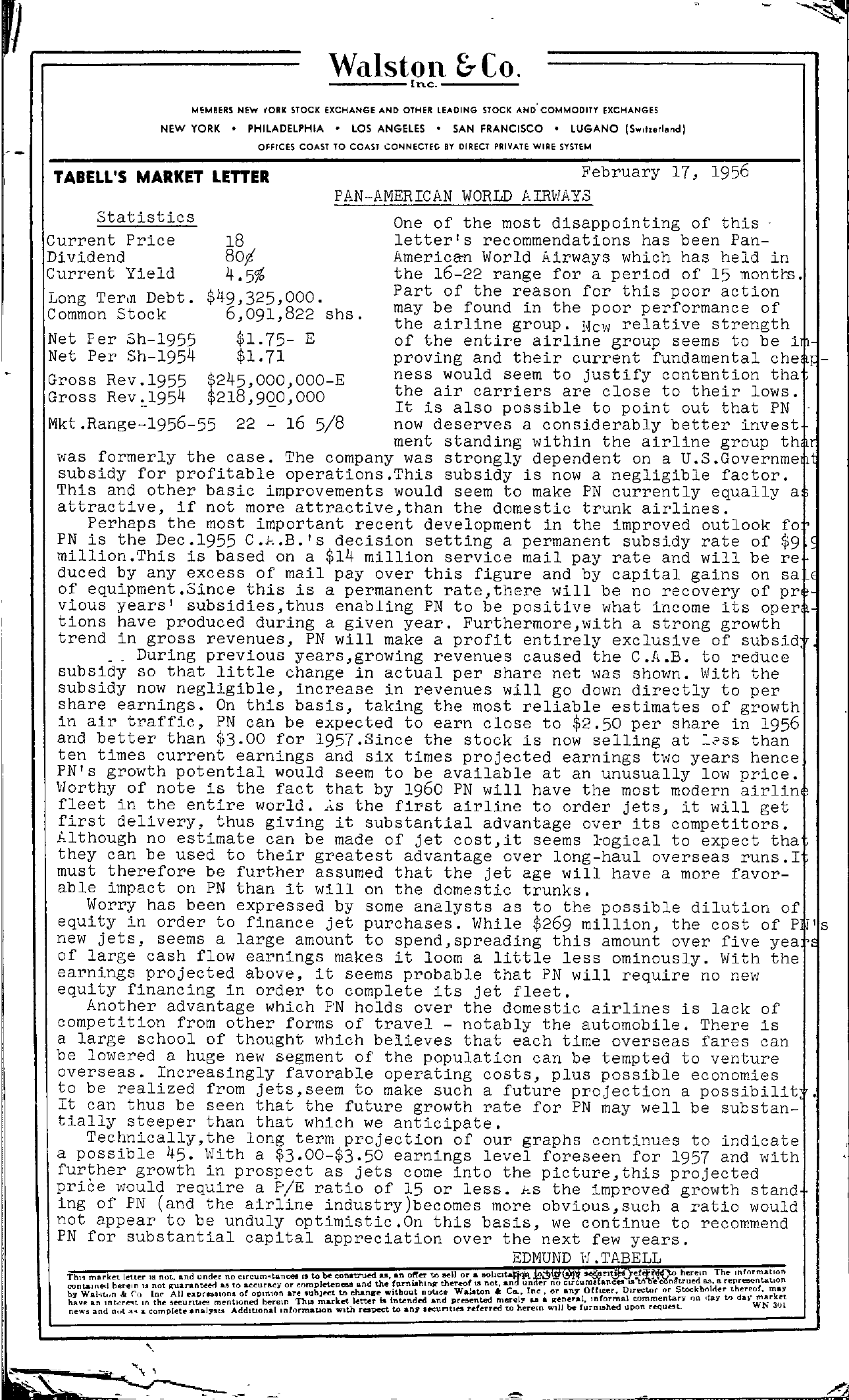 1r. W—a-lstnonc.&–C-o-. twlEMBERS NEw tORK STOCK EXCHANGE AND OTHER LEADING STOCK AND' COMMODITY' EXCHANGES NEW YORK PHILADELPHIA LOS ANGELES SAN FRANCISCO LUGANO Sw,ed I OFFICES COAST TO COAST COt.4NECTEC BY DIR.ECT PRI …. ATE WIRE SYSTEM TABELL'S MARKET LEnER February 17, 1956 PAN-AMERICAN WORLD AIRv!AY3 Statistics One of the most disappointing of this Current Price 18 letter's recommendations has been Pan- Dividend 801 World Airways which has held in Current Yield 4.5 the 16-22 range for a period of 15 months. Long Terill Debt. 49,325,000. Common Stock 6,091,822 shs. Part of the reason for this poor action may be found in the poor performance of the airline group. Hew relative strength Net Fer Sh-1955 1.75- E of the entire airline group seems to be i Net Per Sh-1954 1.71 proving and their current fundamental Gross Rev.1955 245,000,000-E Gross Rev 218,9,2.0,000 ness would seem to justify contention tha the air carriers are close to their lows. It is also possible to point out that PN Mkt.Range-1956-55 22 – 16 5/8 now deserves a considerably better invest ment standing within the airline group was formerly the case. The company was strongly dependent on a U.S.Governme subsidy for profitable operations.This subsidy is now a negligible factor. This and other basic improvements would seem to make PN currently equally a attractive, if not more attractive, than the domestic trunk airlines. Perhaps the most important recent development in the improved outlook fo PN is the Dec.1955 decision setting a permanent subsidy rate of 9,( million.This is based on a 14 million service mail pay rate and will be re duced by any excess of mail pay over this figure and by capital gains on saLE of equipment.Since this is a permanent rate,there will be no recovery of pr vious years' subsidies, thus enabling PN to be positive what income its oper tions have produced during a given year. Furthermore,with a strong growth trend in gross revenues, PN will make a profit entirely exclusive of subsid During previous years, growing revenues caused the C.A.B. to reduce subsidy so that little change in actual per share net was shown. With the subsidy now negligible, increase in revenues will go down directly to per share earnings. On this baSiS, taking the most reliable estimates of growth in air traffic, PN can be expected to earn close to 2.50 per share in 1956 and better than 3.00 for 1957.Since the stock is now selling at than ten times current earnings and six times projected earnings two years hence PN's growth potential would seem to be available at an unusually low price. vlorthy of note is the fact that by 1960 PN will have the most modern airlin fleet in the entire world. AS the first airline to order jets, it will get first delivery, thus giving it substantial advantage over its competitors. Although no estimate can be made of jet cost,it seems rogical to expect tha they can be used to their greatest advantage over long-haul overseas runs.I must therefore be further assumed that the jet age will have a more favor- able impact on PN than it will on the domestic trunks. Worry has been expressed by some analysts as to the possible dilution of equity in order to finance jet purchases. While 269 million, the cost of P 's new jets, seems a large amount to spend, spreading this amount over five year of large cash flow earnings makes it loom a little less ominously. With the earnings projected above, it seems probable that PN will require no new equity financing in order to complete its jet fleet. Another advantage which F'N holds over the domestic airlines is lack of competition from other forms of travel – notably the automobile. There is a large school of thought which believes that each time overseas fares can be lowered a huge new segment of the population can be tempted to venture overseas. Increasingly favorable operating costs, plus possible economies to be realized from jets,seem to make such a future projection a possibilit It can thus be seen that the future growth rate for PN may well be substan- tially steeper than that which we anticipate. Technically,the Ions term projection of our graphs continues to indicate a possible 45. With a 3.00-3.50 earnings level foreseen for 1957 and with further growth in prospect as jets come into the picture, this projected price would require a F/E ratio of 15 or less. 1-.S the improved growth stand ing of PN (and the airline industry)becomes more obvious, such a ratio would not appear to be unduly optimistic.On this baSiS, we continue to recommend PN for substantial capital appreciation over the next few years. EDMUND H.TABELL Th ,k,ma letter I! not. and under no toIbe d th. .,fan h to tehelI ortiaSIMn )ht clatna W o.contained herein Ii! not Iuaranteed aJ! to accuracy or CI'Hl1P et.ene!la an e. o.b'nl.!l InS!' e I C uIn etr…rno r acinryc uOmH! ut'ne1ree'!DIISTect.o1ereo1rn ,h.ue-In Stockho l dTIeIhI rreetphInreefroseeromnf'.a.rltinlooann,. by W.IItn &; ('0 Inr All eXprltll810n!l or opmton aTe aubJltitkto mer'i;, commentary fln rlay to day market have an Intere..t an the mentIoned hereIn Thm mar et. etter II. II. an presen., …. to herem an\J br UP'Qn WN 3'H and nt a .. a complete analY9I!l AddltUlnal mformauon. WIth respect. to any leeuntl(!S re errou '. '\ ,