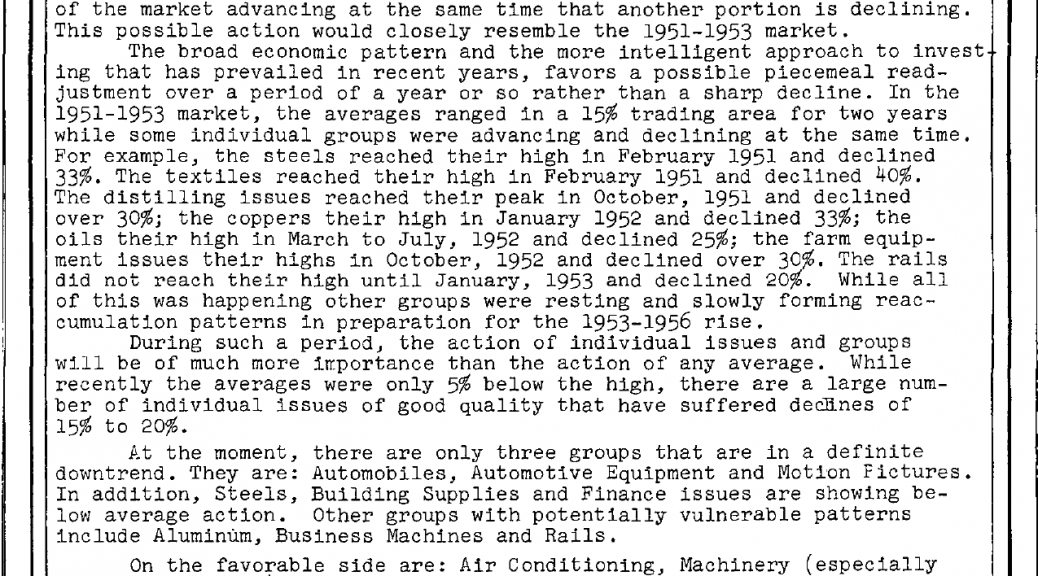 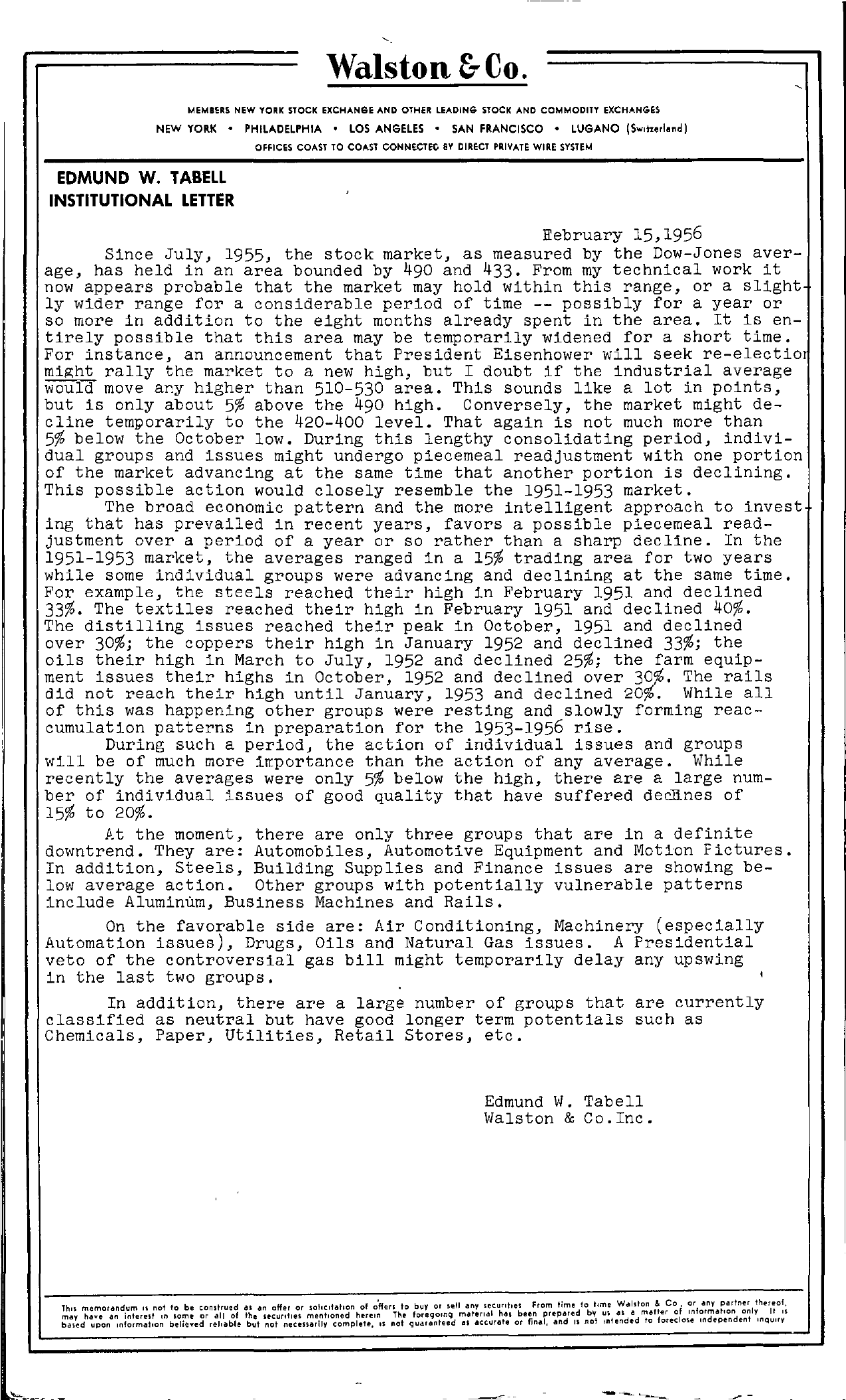 '. Walston &Co. MEMBERS NEW YORK STOCK EXCHANGE AND OTHER LEADING STOCK AND COMMODITY EXCHANGES NEW YORK PHILADELPHIA LOS ANGELES SAN FRANCISCO LUGANO ISw,j,ld I OFFICES COAST TO COAST CONNECTEC BY DIRECT PRIVATE WIRE SYSTEM EDMUND W. TABELL INSTITUTIONAL LETTER Rebruary 15,1956 Since July, 1955, the stock market, as measured by the Dow-Jones average, has held in an area bounded by 490 and 433. From my technical work it now appears probable that the market may hold within this range, or a slight ly wider range for a considerable period of time — possibly for a year or so more in addition to the eight months already spent in the area. It is entirely possible that this area may be temporarily widened for a short time. For instance, an announcement that President Eisenhower will seek re-electio might rally the market to a new high, but I doubt if the industrial average would move ar.y higher than 510-530 area. This sounds like a lot in points, but is only about 5 above the 490 high. Conversely, the market might decline temporarily to the 420-400 level. That again is not much more than 5 below the October low. During this lengthy consolidating period, individual groups and issues might undergo piecemeal readjustment with one portion of the market advanCing at the same time that another portion is declining. This possible action would closely resemble the 1951-1953 market. The broad economic pattern and the more intelligent approach to invest ing that has prevailed in recent years, favors a possible piecemeal readjustment over a period of a year or so rather than a sharp decline. In the 1951-1953 market, the averages ranged in a 15 trading area for two years while some individual groups were advancing and declining at the same time. For example, the steels reached their high in February 1951 and declined 33. The textiles reached their high in February 1951 and declined 40. The distilling issues reached their peak in October, 1951 and declined over 30; the coppers their high in January 1952 and declined 33; the oils their high in March to July, 1952 and declined 25; the farm equipment issues their highs in October, 1952 and declined over 30. The rails did not reach their high until January, 1953 and declined 20. While all of this was happening other groups were resting and slowly forming reaccumulation patterns in preparation for the 1953-1956 rise. During such a period, the action of individual issues and groups will be of much more irrportance than the action of any average. While recently the averages were only 5 below the high, there are a large number of individual issues of good quality that have suffered declines of 15 to 20. At the moment, there are only three groups that are in a definite downtrend. They are Automobiles, Automotive Equipment and Motion Fictures. In addition, Steels, Building Supplies and Finance issues are showing below average action. Other groups with potentially vulnerable patterns include Aluminum, Business Machines and Rails. On the favorable side are Air Conditioning, Machinery (especially Automation issues), Drugs, Oils and Natural Gas issues. A Presidential veto of the controversial gas bill might temporarily delay any upswing in the last two groups. In addition, there are a large number of groups that are currently classified as neutral but have good longer term potentials such as Chemicals, Paper, utilities, Retail Stores, etc. Edmund 111. Tabell Walston & Co.Inc. imemorandum not to be tonilrued as offer or sohtltahon of a'Hen to buy or sell any lec.untles From time to tIme Wlslon & Co or, any partr'ler I may have an interest 11'1 some or Clii of the u!(unt,es mentioned here.n The foregOing m,,!eTldl has been prepared bv III as a mlIer 0 In ormatton on y II baled IIPon information believed rehable but not necessarily complete, IS lIot guarlilnteed U aCCufate Of finl, and Ii not ,ntended to foreclole Independent 'qUlfY —–..