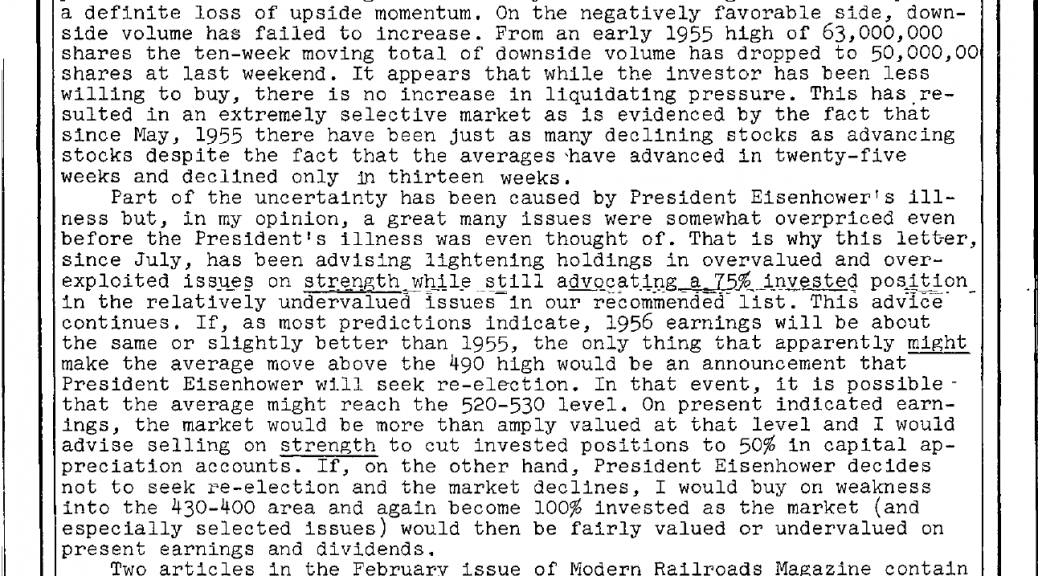 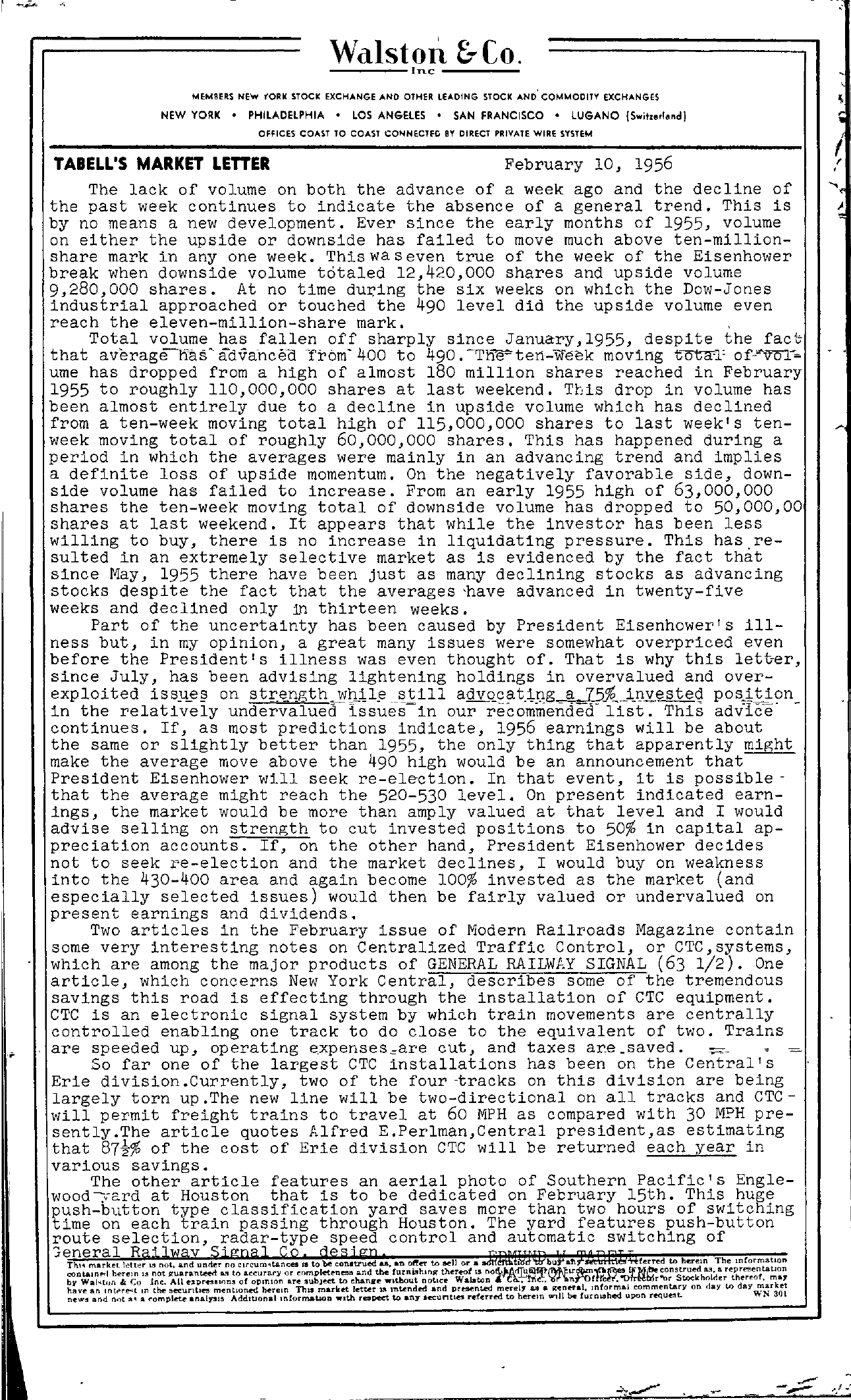 Walston &- Co. —–Inc – – – – MEMBERS NEw fORI( STOCK EXCHANGE AND OTHER LEADING STOCK AND' COMMODITY eXCHANGES NEW YORK PHILADELPHIA LOS ANGELES SAN FRANCISCO LUGANO Sw;t,,,I,,dl OFFICES COAST TO COAST CONNECTfC BY DIRECT PRIVATE WIRE SYSTEM TABELL'S MARKET LETTER February 10, 1956 The lack of volume on both the advance of a week ago and the decline of the past week continues to indicate the absence of a general trend. This is by no means a new development. Ever since the early months of 1955, volume on either the upside or downside has failed to move much above ten-million- share mark in anyone week. This wa s even true of the vleek of the Eisenhower break when downside volume totaled 12,420,000 shares and upside volume 9,280,000 shares. At no time during the six weeks on which the Dow-Jones industrial approached or touched the 490 level did the upside volume even reach the eleven-million-share mark. Total volume has fallen off sharply since January,1955, despite the fact that advahc8a Tram- 400 to 490. -Tfie- ten-week moving ume has dropped from a high of almost 180 million shares reached in February 1955 to roughly 110,000,000 shares at last weekend. This drop in volume has been almost entirely due to a decline in upside volume which has declined from a ten-week moving total high of 115,000,000 shares to last week's ten- week moving total of roughly 60,000,000 shares. This has happened during a period in which the averages were mainly in an advancing trend and implies a definite loss of upside momentum. On the negatively favorable side, down- side volume has failed to increase. From an early 1955 high of 63,000,000 shares the ten-week moving total of downside volume has dropped to 50,000,00 shares at last weekend. It appears that while the investor has been less willing to buy, there is no increase in liquidating pressure. This has,re- suIted in an extremely selective market as is evidenced by the fact that since May, 1955 there have been just as many declining stocks as advancing stocks despite the fact that the averages 'have advanced in twenty-five weeks and declined only in thirteen weeks. Part of the uncertainty has been caused by President Eisenhower's ill- ness but, in my opinion, a great many issues were somewhat overpriced even before the President's illness was even thought of. That is why this since July, has been advising lightening holdings in overvalued and over- exploited iss.Le on whJl.esj;ill posj,tion in the relatively undervalued issues-in our recommended' list This advice – continues. If, as most predictions indicate, 1956 earnings will be about the same or slightly better than 1955, the only thing that apparently make the average move above the 490 high would be an announcement that President Eisenhower will seek re-election. In that event, it is possible' that the average might reach the 520-530 level. On present indicated earn- ings, the market would be more than amply valued at that level and I would advise selling on to cut invested pOSitions to 50 in capital ap- preciation accounts. If, on the other hand, President Eisenhower decides not to seek re-election and the market declines, I would buy on weakness into the 430-400 area and again become 100 invested as the market (and especially selected issues) would then be fairly valued or undervalued on present earnings and dividends. Two articles in the February issue of Modern Railroads Magazine contain some very interesting notes on Centralized Traffic Control, or CTC,systems, which are among the major products of GENERAL RAILWAY SIGNAL (63 1/2). One article, which concerns New York Central, describes some of the tremendous savings this road is effecting through the installation of CTC eqUipment. CTC is an electronic signal system by which train movements are centrally controlled enabling one track to do close to the equivalent of two. Trains I- are speeded up, operating cut, and taxes ar.e.saved. So far one of the largest CTC installations has been on the Central's Erie division.Currently, two of the four tracks on this division are being largely torn up.The new line will be two-directional on all tracks and CTC- vlill permit freight trains to travel at 60 MPH as compared with 30 MPH pre- sently.The article quotes Alfred E.Perlman,Central president,as estimating that of the cost of Erie division CTC will be returned each year in various savings. The other article features an aerial photo of Southern Pacific's Engle- wood-yard at Houston that is to be dedicated on February 15th. This huge push-button type classification yard saves more than two hours of switching time on each train passing through Houston. The yard features push-button route selection, radar-type speed control and automatic switching of Jeneral Raiiwav' Sifma.l Co' rj,,, i pn market letter,,, not and unner no II to be con.trued … aD offer to &eJl or a I ferred to herein The Information contalrlf1 bereln ,,, not by WaltJn Co ALI a9 to accurary ar of Opinion are and the furnbhmg thereof 1S ltrMibe a to ehanlfe WIthout notue Wabton C&. triC. 'lS'r''1lnt''O!tt'ett'. toe e have an lnt;re-ot In thor 3ecuntleS mentioned herem Tha markltt letter 111 Intended and presented merely u a !tenHal, mformal on clay tJ) day new and n.)t a tomplete analYSIS Additional Inform.atJon With respeet. to any .untles referred to herem W'IIl hoe upon request. I ,, – J