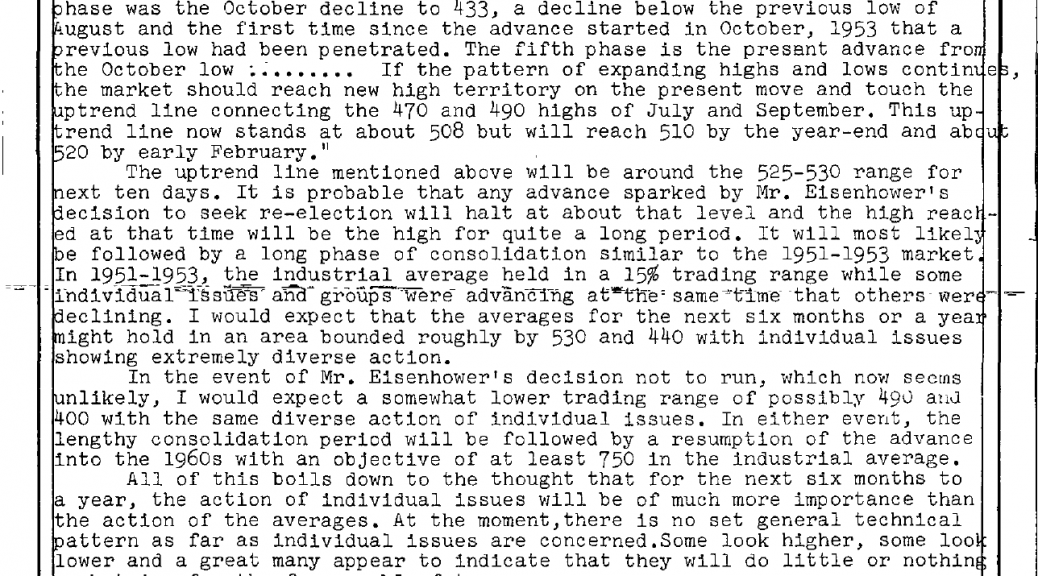 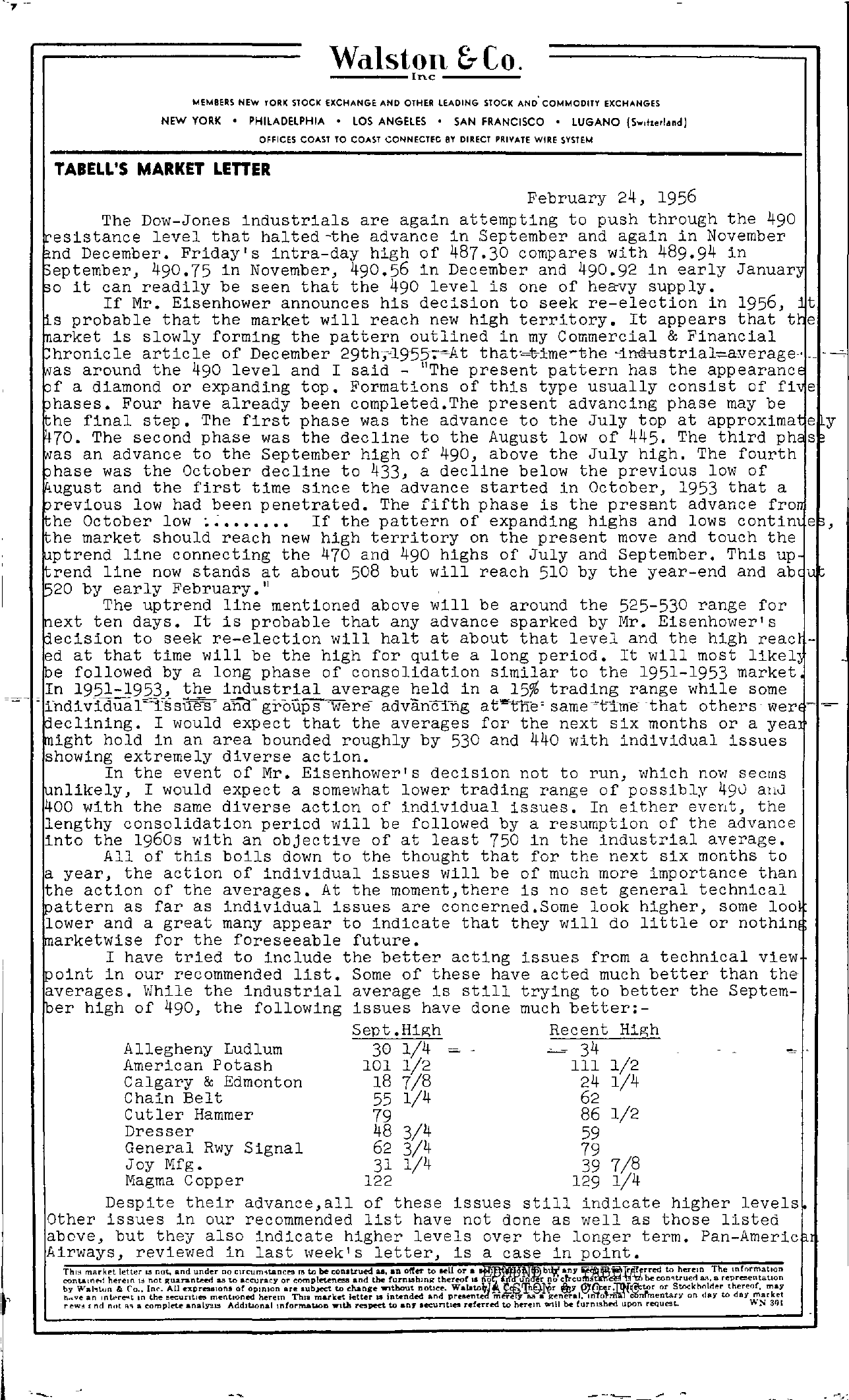 ., Wdlston &- CO. —-Inc —- MEMBERS NEW ,ORK STOCK EXCHANGE AND OTHER LEADING STOCK AND' COMMODITY EXCHANGES NEW YORK PHILADELPHIA LOS ANGELES SAN FRANCISCO LUGANO Sw,'wl..d) OFFICES COAST TO COAST CONNECTfC BY DIRECT PRIVATE WIRE SYSTEM TABELL'S MARKET LEnER February 24, 1956 The Dow-Jones industrials are again attempting to push through the 490 !resistance level that halted-the advance in September and again in November December. Friday's intra-day high of 487.30 compares with 489.94 in 490.75 in November, 490.56 in December and 490.92 in early January it can readily be seen that the 490 level is one of heavy supply. If Mr. Eisenhower announces his decision to seek re-election in 1956, it probable that the market will reach new high territory. It appears that tre is slowly forming the pattern outlined in my Commercial & Financial article of December 29th,-1955-;-At -in;i!ttstrial,average –, f'ias around the 490 level and I said – The present pattern has the appearancE pf a diamond or expanding top. Formations of this type usually consist of five phases. Four have already been completed.The present advancing phase may be phe final step. The first phase was the advance to the July top at The second phase was the decline to the August low of 445. The third an advance to the September high of 490, above the July high. The fourth phase was the October decline to 433, a decline below the previous low of and the first time since the advance started in October, 1953 that a previous low had been penetrated. The fifth phase is the present advance fro, October low If the pattern of expanding highs and lows contin es, market should reach new high territory on the present move and touch the rptrend line connecting the 470 and 490 highs of July and September. This up line now stands at about 508 but will reach 510 by the year-end and ab f20 by early February. The uptrend line mentioned above will be around the 525-530 range for pext ten days. It is probable that any advance sparked by Mr. Eisenhower's to seek re-election will halt at about that level and the high reac – ed at that time will be the high for quite a long period. It will most likel pe followed by a long phase of consolidation similar to the 1951-1953 market In 1951-1953, the industrial average held in a 15 trading range while some – 'lndiv1dual't'13su–e'if and- groups'were advan-clng at''''tl1e' others wer I would expect that the averages for the next six months or a yea hold in an area bounded roughly by 530 and 440 with individual issues showing extremely diverse action. In the event of Mr. Eisenhower's decision not to run, which now seems I would expect a somewhat lower trading range of possibly 490 allJ 400 with the same diverse action of individual issues. In either event, the lengthy consolidation period will be followed by a resumption of the advance into the 1960s with an objective of at least 750 in the industrial average. All of this boils down to the thought that for the next six months to a year, the action of individual issues will be of much more importance than the action of the averages. At the moment,there is no set general technical rattern as far as individual issues are concerned.Some look higher, some 100 lower and a great many appear to indicate that they will do little or nothin for the foreseeable future. I have tried to include the better acting issues from a technical view roint in our recommended list. Some of these have acted much better than the averages. While the industrial average is still trying to better the Septem- high of 490, the following issues have done much better- Recent Allegheny Ludlum American Potash Calgary & Edmonton Chain Belt Cutler Hammer Dresser General Rwy Signal Joy Mfg. Magma Copper 30 1/4 101 1/2 18 7/8 55 1/4 79 48 3/4 62 3/4 31 1/4 122 – 34 111 1/2 24 1/4 62 86 1/2 59 79 39 7/8 129 1/4 Despite their advance,all of these issues still indicate higher levels Other issues in our recommended list have not done as well as those listed above, but they also indicate higher levels over the longer term. Pan-Americ Airways, reviewed in last week's letter, is a case in pOint. Thill mllrket Jett.n l.! not, and under no 1'8 to be con.trued aa, an ofter to seU or a NWI but any to The InformatIOn eonu,II'I('oj by he&reirno.. not guaral'lteei as to accuracy or cf')fn.pletenea and the farn1ShJng thereof Inl'. All exprntllonll of OpiniOn are subJeCt to chanee Wlthout notice. IS no cfrcum.ftlt'n'd!!I1li17l be con'ltruerl II. representation tly or Stnckhnlder thereof. may … ve an ll'ltore-t In the mentIoned hereIn ThIB market letter IS intended and mere'rY a general. lrltohfi'i.i'Cbrrl'mentary on dllY to day nd nlt a complete Addlbonal InforrnaboD …IUI respect to any Buntle!l referred to hereIn W111 br furnlllbed upon reQuest. v.s 301