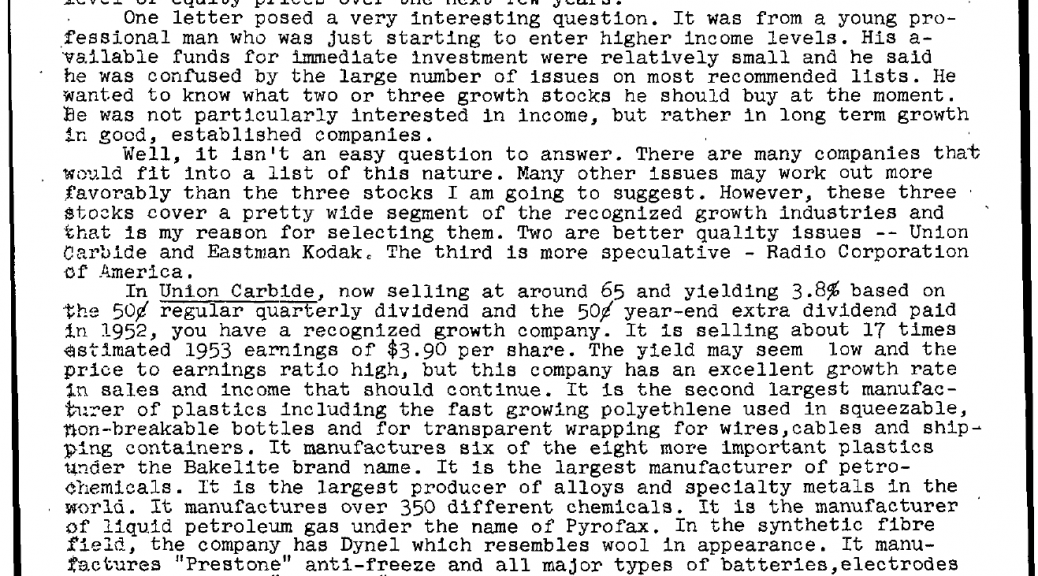 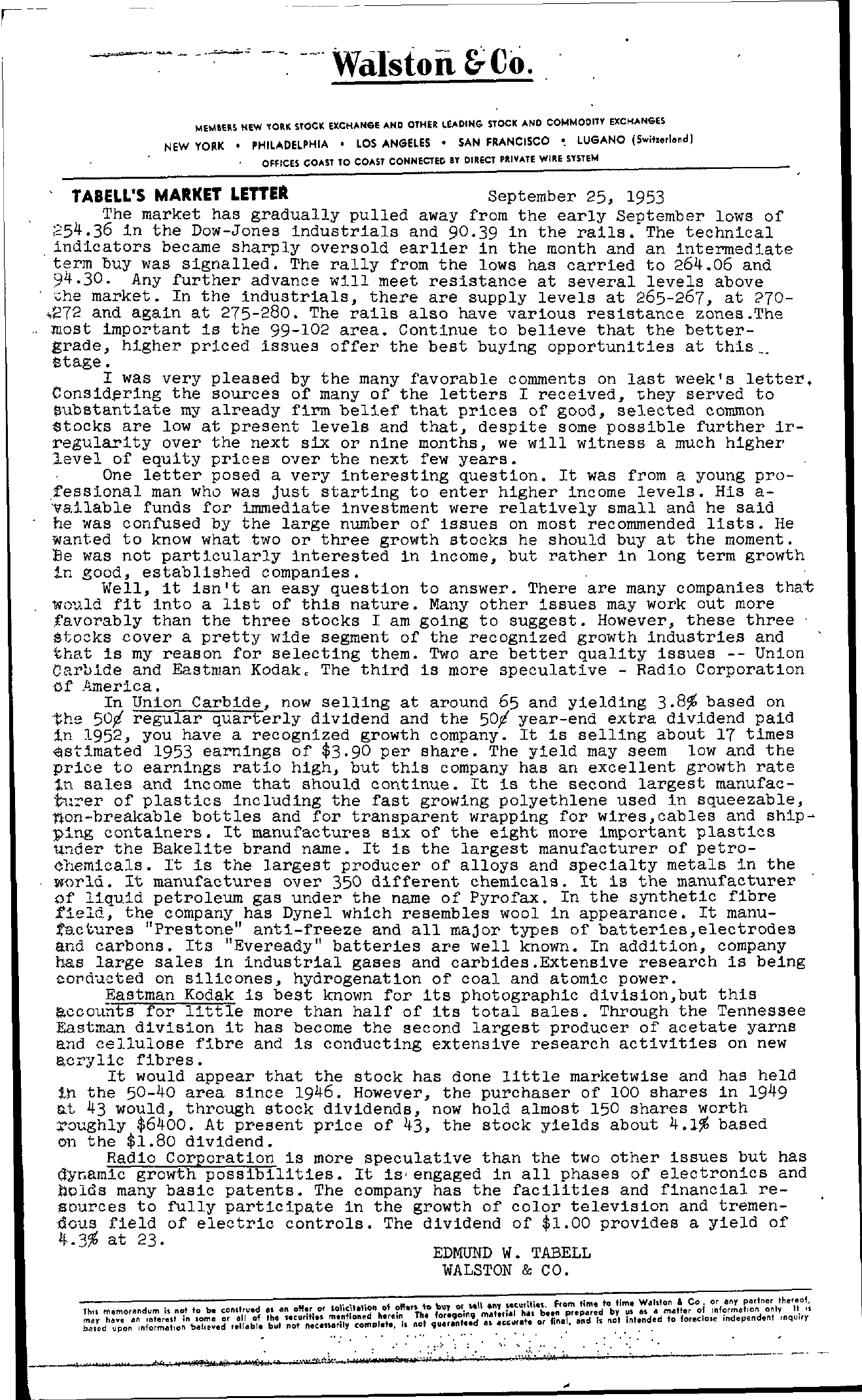 – — – – – – – – – – – – – – – – – – – – – – – – – – – —- Walston Co. MfMeUS HEW YORK STOCK ECHN6E AND OTHER l.EADING STOCK AND COMMODITY EXCHANGES NEW YORK PHILADELPHIA ' LOS ANGELES SAN FRANCISCO ' LUGANO (SwH,.,I.nd) OFfiCES COAST TO COAST CONNECTEC BY DIRECT PRIVATE WIRE SYSTEM TABELL'S MARKET LETTER September 25, 1953 The market has gradually pulled away from the early September lows of 254.36 in the Dow-Jones industrials and 90.39 in the rails. The technical . indicators became sharply oversold earlier in the month and an intermediate term buy was signalled. The rally from the lows has carried to 264.06 and 94 .30. Any further advance will meet resistance at several levels above he market. In the industrials, there are supply levels at 265-267, at 70272 and again at 275-280. The rails also have various resistance zones.The most important is the 99-102 area. Continue to believe that the better- grade, higher priced issues offer the best buying opportunities at this ttage. I was very pleased by the many favorable comments on last week's letter, Considring the sources of many of the letters I received, they served to substantiate my already firm belief that prices of good, selected common tocks are low at present levels and that, despite some possible further ir- regularity over the next six or nine months, we will witness a much higher level of equity prices over the next few years. One letter posed a very interesting question. It was from a young pro- .fessional man who was just starting to enter higher income levels. His a- vailable funds for immediate investment were relatively small and he said he was confused by the large number of issues on most recommended lists. He wanted to know what two or three growth stocks he should buy at the moment. Ee was not particularly interested in income, but rather in long term growth !n good, established companies. .. Well, it isn't an easy question to answer. There are many companies that wO'JId fit into a list of this nature. Many other issues may work out more favorably than the three stocks I am going to suggest. However, these three Stocks cover a pretty wide segment of the recognized growth industries and that is my reason for selecting them. Two are better quality issues — Union Oarulde and Eastman Kodak. The third is more speculative – Radio Corporation cf America. In Union Carbide, now selling at around 65 and yielding 3.8 based on the 501 regular quarterly dividend and the 501 year-end extra dividend paid in 1952, you have a recognized growth company. It is selling about 17 times stimated 1953 earnings of 3.90 per share. The yield may seem low and the price to earnings ratio high, but this company has an excellent growth rate tn sales and income that should continue. It is the second largest manufac- !er of plastics including the fast growing polyethlene used in squeezable, non-breakable bottles and for transparent wrapping for wires,cables and ship- ping containers. It manufactures six of the eight more important plastics 'der the Bakelite brand name. It is the largest manufacturer of petro- 11emicals. It is the largest producer of alloys and specialty metals in the world. It manufactures over 350 different chemicals. It is the manufacturer of liquid petroleum gas under the name of Pyrofax. In the synthetic fibre field, the company has Dynel which resembles wool in appearance. It manu- factures Prestone anti-freeze and all major types of batteries,electrodes and carbons. Its Eveready batteries are well known. In addition, company has large sales in industrial gases and carbides.Extensive research is being copducted on silicones, hydrogenation of coal and atomic power. Eastman Kodak is best known for its photographic division,but this accounts for little more than half of its total sales. Through the Tennessee Eastman division it has become the second largest producer of acetate yarns and cellulose fibre and is conducting extensive research activities on new acrylic fibres. It would appear that the stock has done little marketwise and has held in the 50-40 area since 1946. However, the purchaser of 100 shares in 1949 t 43 would, through stock dividends, now hold almost 150 shares worth roughly 6400. At present price of 43, the stock yields about 4.1 based on the 1.80 dividend. Radio Corporation is more speculative than the two other issues but has dsnamic growth possibilities. It is-engaged in all phases of electronics and holds many basic patents. The company has the facilities and financial re- sources to fully participate in the growth of color television and tremen- fious field of electric controls. The dividend of 1.00 provides a yield of 4.3 at 23. EDMUND W. TABELL WALSTON & CO. Thu .rfll,may memorllndum is not to b. have an .nterest In some construed or al,l of a. lin oHt or tho '.CUrltI U)hcj,.tlon of me,nholu,d h, H.n to Th,. \I 1\ wc.lnttl.., ffom time to time Wahton & Co, or any partner thereof, f\lourl.9Olfn,9d t rial hal – !ccuret. b'n prepared or finlll, end II by not loll ,u matter of Infrmatlon only It. IS Intended to foreclose Independent InquirY .t., quat… . .baled upon Information behll….d r.llabl. but not necenauly comp 110 .. .. ,.. ., , , ',' , .. .. i.-'-;….–'– – – – – – -,writ j l' Iz! n, ,.,'iU';l , , '.,. .;d'','..' ;'. …- ' '. ; ' .. ……..;r;..,…;……,… . – \- ' , 'f' U