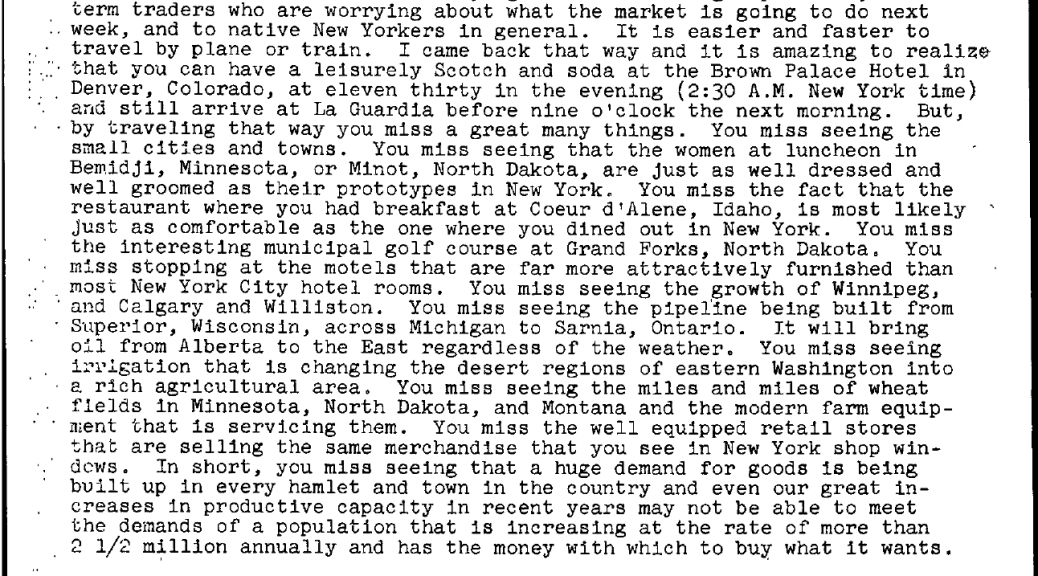 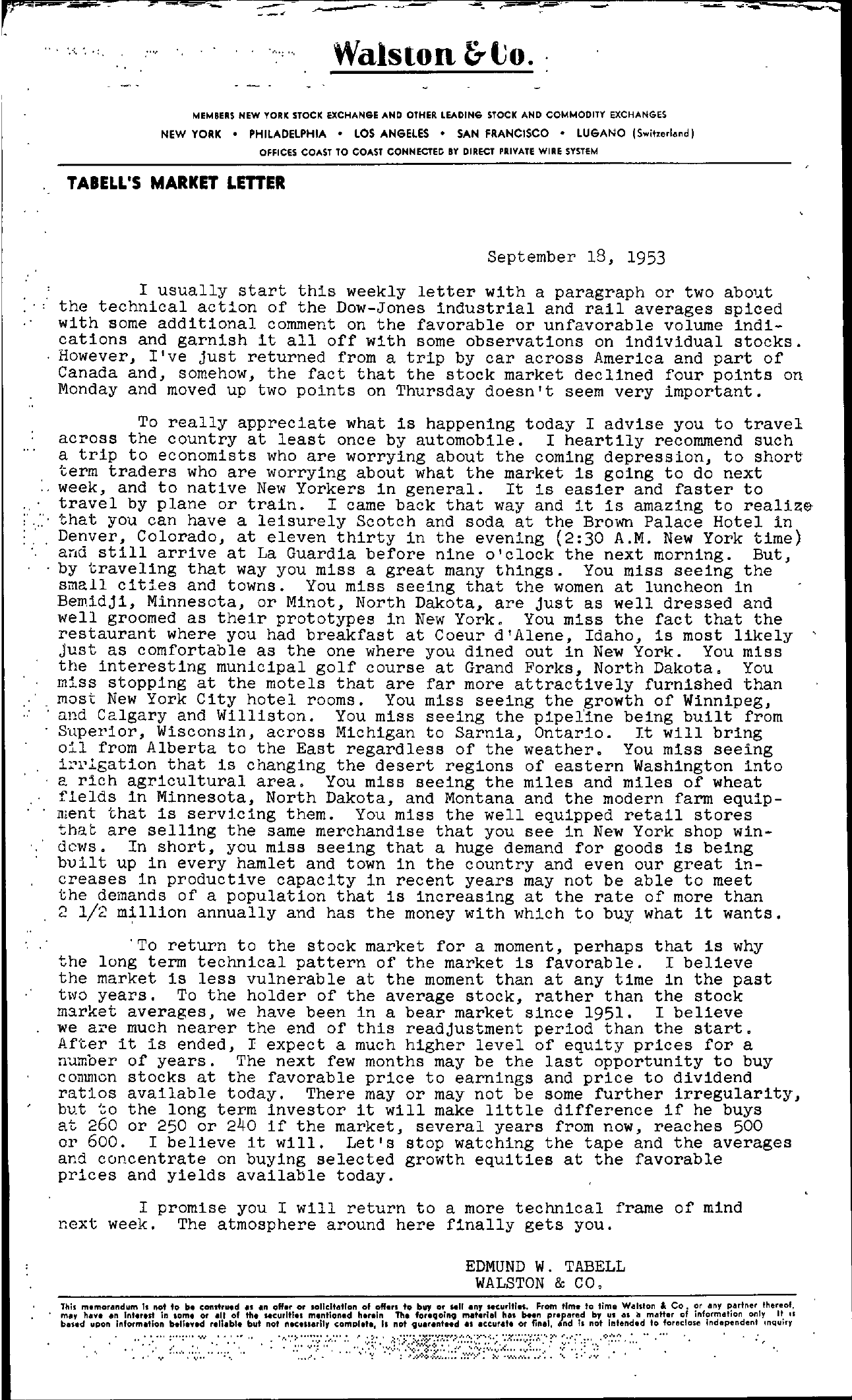 –' -. ' . Walston 5- (;0 .. MEMBERS NEW YORK STOCK EXCHANGE AND OTHER LEADING STOCK AND COMMODITY EXCHANGES NEW YORK PHILADELPHIA LOS ANGELES SAN FRANCISCO LUGANO ISwitd.,d, OFFICES COAST TO COAST CONNECTEr. BY DIRECT PRIVATE WIRE SYSTEM TABELL'S MARKET LETTER September 18, 1953 I usually start this weekly letter with a paragraph or two about the technical action of the Dow-Jones industrial and rail averages spiced with some additional comment on the favorable or unfavorable volume indications and garnish it all off with some observations on individual stocks. However, I've just returned from a trip by car across America and part of Canada and, somehow, the fact that the stock market declined four pOints on Monday and moved up two points on Thursday doesn't seem very important. To really appreciate what is happening today I advise you to travel across the country at least once by automobile. I heartily recommend such a trip to economists who are worrying about the coming depreSSion, to short term traders who are worrying about what the market is going to do next week, and to native New Yorkers in general. It is easier and faster to travel by plane or train. I came back that way and it is amazing to realize that you can have a leisurely Scotch and soda at the Brown Palace Hotel in Denver, Colorado, at eleven thirty in the evening (230 A.M. New York time) and still arrive at La Guardia before nine o'clock the next morning. But, by traveling that way you miss a great many things. You miss seeing the small cities and towns. You miss seeing that the women at luncheon in Bemidji, Minnesota, or Minot, North Dakota, are just as well dressed and well groomed as their prototypes in New York. You miss the fact that the restaurant where you had breakfast at Coeur d'Alene, Idaho, is most likely Just as comfortable as the one where you dined out in New York. You miss the interesting municipal golf course at Grand Forks, North Dakota. You miss stopping at the motels that are far more attractively furnished than most New York City hotel rooms. You miss seeing the growth of Winnipeg, and Calgary and Williston. You miss seeing the pipel'ine being built from Superior, Wisconsin, across Michigan to Sarnia, Ontario. It will bring oil from Alberta to the East regardless of the weather. You miss seeing irrIgation that is changing the desert regions of eastern WaShington into a rich agricultural area. You miss seeing the miles and miles of wheat fields in Minnesota, North Dakota, and Montana and the modern farm equip- ment that is servicing them. You miss the well equipped retail stores that are selling the same merchandise that you see in New York shop win- dews. In short, you miss seeing that a huge demand for goods is being built up in every hamlet and town in the country and even our great in- creases in productive capaCity in recent years may not be able to meet the demands of a population that is increasing at the rate of more than 2 1/2 m,illion annually and has the money with which to buy ' what it wants. 'To return to the stock market for a moment, perhaps that is why the long term technical pattern of the market is favorable. I believe the market is less vulnerable at the moment than at any time in the past two years. To the holder of the average stock, rather than the stock market averages, we have been in a bear market since 1951. I believe we are much nearer the end of this readjustment period than the start. After it is ended, I expect a much higher level of equity prices for a nlmoer of years. The next few months may be the last opportunity to buy conrnlon stocks at the favorable price to earnings and price to dividend ratios available today. There mayor may not be some further irregularity, bu.t 'co the long term investor it will make little difference if he buys at 260 or 250 or 240 if the market, several years from now, reaches 500 or 600. I believe it will. Let's stop watching the tape and the averages and concentrate on buying selected growth equities at the favorable prices and yields available today. I promise you I will return to a more technical frame of mind next week. The atmosphere around here finally gets you. EDMUND W. TABELL WALSTON & CO, Thil memorandum It not to 1M construed al .n offu or solicitation of offe,. to buy or Mil .ny securlt,, From tim. to time WoIIbton & Co. r any artner thereof, mr ha…. an Int.,.n In 10m. or .11 of the securltl.s m.ntloned h.r.'n Th. 'or'Qol1\9 materiel he, been prepered by UI a matter of Information only It. IS baud upon Informetlon believed tenable but not neeenafHy complete, II not quatante.d al accurate or finel, and II not Intended to foreclose Independent InqUiry …. . ….. ' ' .. ,.,. . , , ,,' ',' ,'. ,,, '