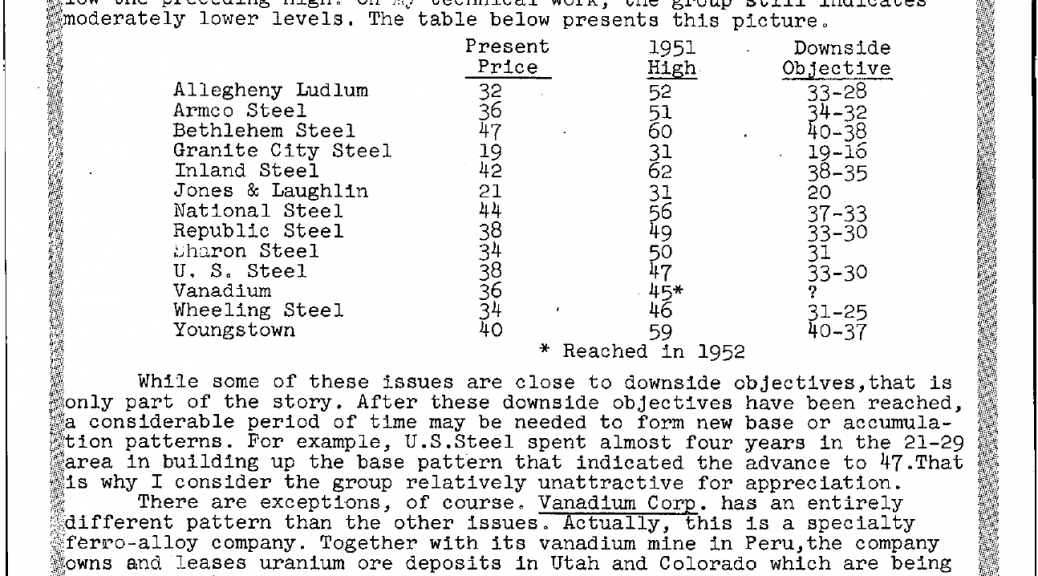 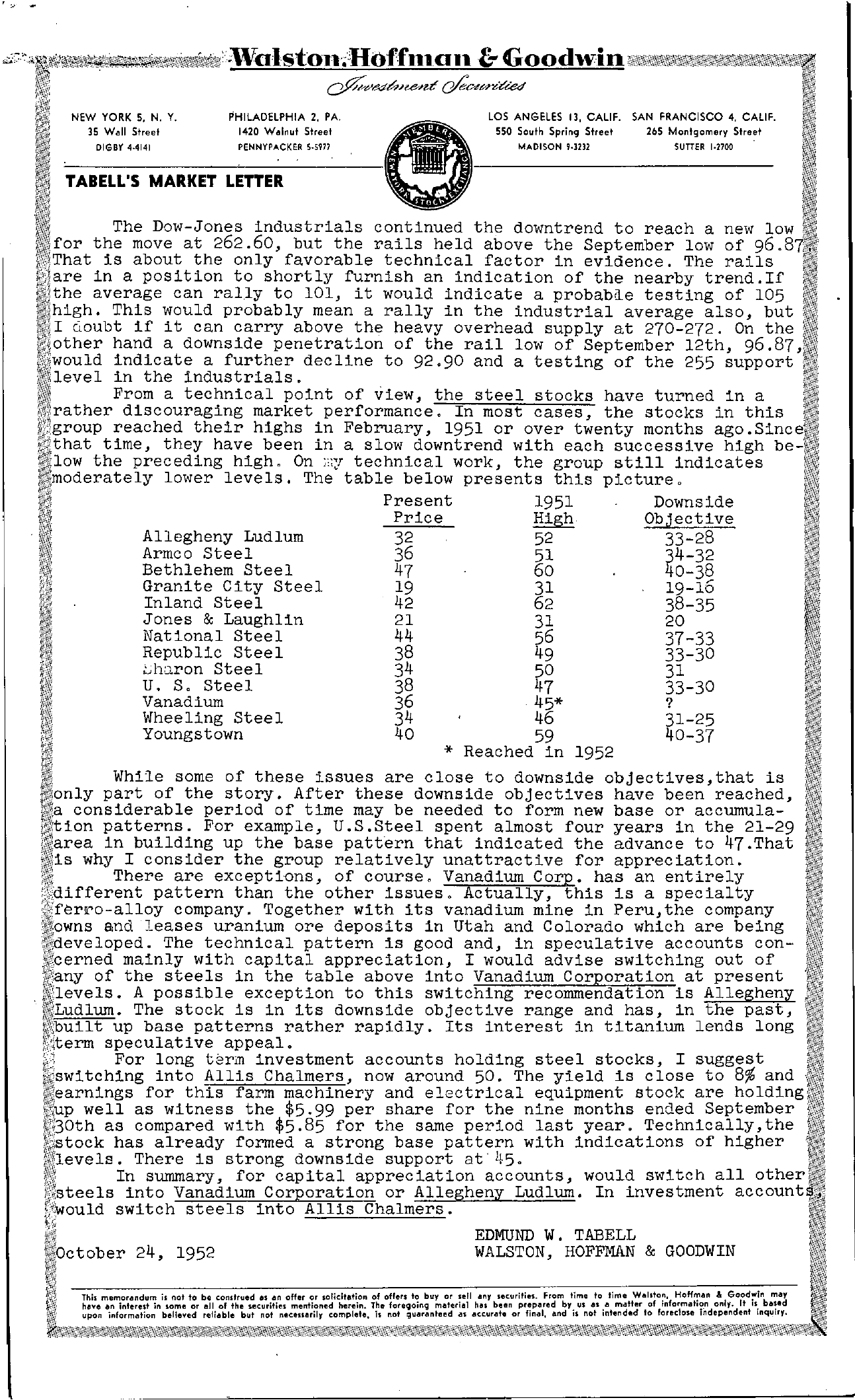 NEW YORK 5. N. y, 35 Wall Street DIGBY 44141 PHILADELPHIA 2. PA. 1420 Walnut Street PENNYPACKER 5-5977 '. TABEll'S MARKET lETTER LOS ANGELES 13. CALIF. 550 South Spring Street MADISON 922 SAN FRANCISCO 4. CALIF. 265 Montgomery Street SUTTER 12700 ;;;, The Dow-Jones industrials continued the downtrend to reach a new low ;for the move at 262.60, but the rails held above the September low of 96. , t is about the only favorable technical factor in evidence. The rails in a position to shortly furnish an indication of the nearby trend.If average can rally to 101, it would indicate a probabiLe testing of 105 igh. This would probably mean a rally in the industrial average also, but I Ci.oubt if it can carry above the heavy overhead supply at 270-272. On the' '.;;, r hand a downside penetration of the rail low of September 12th, 96.87, ; ould indicate a further decline to 92.90 and a testing of the 255 support ,level in the industrials. From a technical point of view, the steel stocks have turned in a ther discouraging market performance. In most cases, the stocks in this 8'n,, reached their highs in February, 1951 or over twenty months ago.Sinc time, they have been in a slow downtrend with each successive high be low the preceding high. On ;;;y technical work, the group still indicates erately lower levels. The table below presents this picture. Present 1951 Downside Price High Objective Allegheny Ludlum Armco Steel Bethlehem Steel 32 36 47 52 33-28 51 34-32 60 40-38 Granite City Steel Inland Steel Jones & Laughlin 19 42 21 31 19-16 62 38-35 31 20 National Steel ,.' ',' Republic Steel ;;)nron Steel 44 38 34 56 37-33 49 33-30 50 31 U. S. Steel Vanadium Wheeling Steel Youngstown ';'. 38 47 36 45 34 46 40 59 Reached in 1952 33-30 31-25 40-37 While some of these issues are close to downside objectives,that is part of the story. After these downside objectives have been reached, considerable period of time may be needed to form new base or accumulaion patterns. For example, U.S.Steel spent almost four years in the 21-29 in building up the base pattern that indicated the advance to 47.That why I consider the group relatively unattractive for appreCiation. There are exceptiDns, of course. Vanadium Corp. has an entirely — pattern than the other issues. Actually, this is a specialty 8'bv'''-alloy company. Together with its vanadium mine in Peru,the company a.nd leases uranium ore deposits in Utah and Colorado which are being loped. The technical pattern is good and, in speculative accounts conerned mainly with capital appreciation, I would advise switching out of of the steels in the table above into Vanadium Corporation at present Is. A possible exception to this switching recommendation is Allegheny . The stock is in its downside objective range and has, in the past, up base patterns rather rapidly. Its interest in titanium lends long speculative appeal. For long term investment accounts holding steel stocks, I suggest itching into Allis Chalmers, now around 50. The yield is close to 8 and ings for this farm machinery and electrical equipment stock are holding; well as witness the 5.99 per share for the nine months ended September as compared with 5.85 for the same period last year. Technically,the has already formed a strong base pattern with indications of higher Is. There is strong downside support at' 15. In summary, for capital appreciation accounts, would switch all other teels into Vanadium Corporation or Allegheny Ludlum. In investment accoun switch steels into Allis Chalmers. tober 24, 1952 EDMUND W. TABELL WALSTON, HOFFMAN & GOODWIN This memorandum is not to be construed a lin offer or solicitation of offers to buy or sell any securities. From time to time Walllo Hoff,!an ,& Good,! may have an interest in lome or ell of the leeurities mentioned herein. The foreqoing mll'erial luIS bun pr!piued by. us as ,of! matter of Informa only. It . ba!ed upon information belleyed reHable but not necenaril, complete, h not 'iJuaranleed a accufllt. or final, and IS not Intended to foreclose Independent Inquiry.