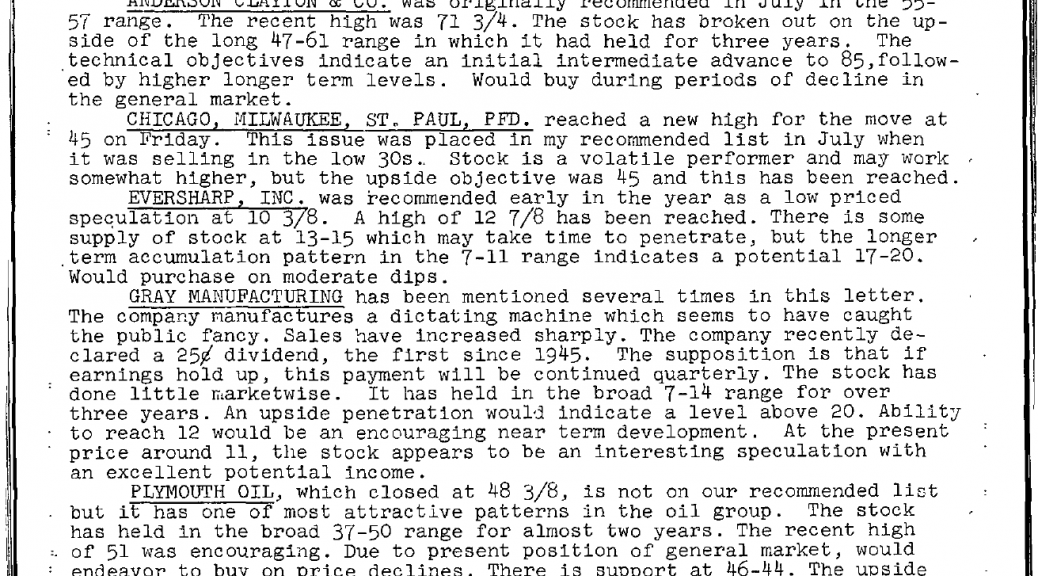 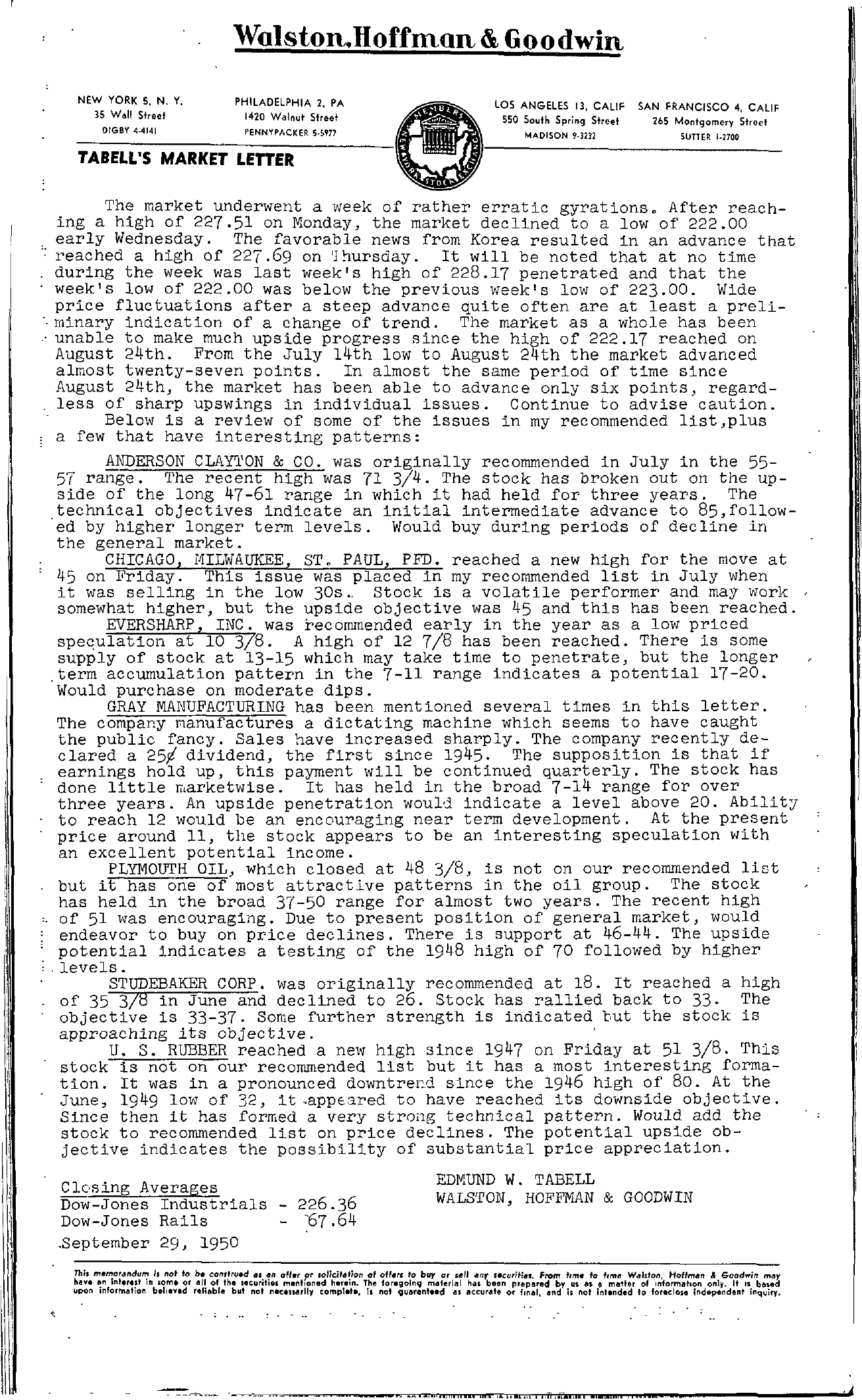 Walston.Hoffman &, Goodwin NEW YORK 5, N. Y. 3S Wall Street DIGBY 4-4141 PHILADELPHIA 2, PA 1420 Walnut Street PENNYPACKER 55'77 TABELL'S MARKET LETTER LOS ANGELES 13, CALIF 550 South Spring Street MADISON 9-3232 SAN FRANCISCO 4, CALIF 2bS Montgomery Street SUTTER '1700 The market underwent a week of rather erratic gyrations. After reaching a high of 227.51 on Monday, the market declined to a low of 222.00 early Wednesday. The favorable news from Korea resulted in an advance that .. reached a high of 227.69 on 'lhursday. It will be noted that at no time during the week was last week's high of 228.17 penetrated and that the week's low of 222.00 was below the previous week's low of 223.00. Wide price fluctuations after a steep advance quite often are at least a preliminary indication of a change of trend. The market as a whole has been unable to make much upside progress since the high of 222.17 reached on August 24th. From the July 14th low to August 24th the market advanced almost twenty-seven pOints. In almost the same period of time since August 24th, the market has been able to advance only six pOints, regard- less of sharp upswings in individual issues. Continue to advise caution. Below is a review of some of the issues in my recommended list,plus a few that have interesting patterns ANDERSON CLAYTON & CO. was originally recommended in July in the 55- 57 range. The recent high was 71 3/4. The stock has broken out on the up- side of the long 47-61 range in which it had held for three years. The technical objectives indicate an initial intermediate advance to 85,follow- 'ed by higher longer term levels. Would buy during periods of decline in the general market. CHICAGO, fULWAUKEE, ST. PAUL, PFD. reached a new high for the move at 45 on Friday. This issue was placed in my recommended list in July when it was selling in the low 30s.. Stock is a volatile performer and may work somewhat higher, but the upside objective was 45 and this has been reached. EVERSHARP , INC. was recommended early in the year as a low priced spequlation at 10 3/8. A high of 12 7/8 has been reached. There is some supply of stock at 13-15 which may take time to penetrate, but the longer .term accumulation pattern in the 7-11 range indicates a potential 17-20. Would purchase on moderate dips. GRAY MANUFACTURING has been mentioned several times in this letter. The company anufactures a dictating machine which seems to have caught the public fancy. Sales have increased sharply. The company recently de- clared a 251 dividend, the first since 1945. The supposition is that if earnings hold up, this payment will be continued quarterly. The stock has done little r;,arketwise. It has held in the broad 7-14 range for over three years. An upside penetration woulj indicate a level above 20. Ability to reach 12 would be an encouraging near term development. At the present price around 11, tile stock appears to be an interesting speculation with an excellent potential income. PLYMOUTH OIL, which closed at 48 3/8, is not on our recommended list but it has one of most attractive patterns in the oil group. The stock has held in the broad 37-50 range for almost two years. The recent high .. of 51 was encouraging. Due to present position of general market, would endeavor to buy on price declines. There is support at 46-44. The upside potential indicates a testing of the 1948 high of 70 followed by higher , levels. STUDEBAKER CORP. was originally recommended at 18. It reached a high of 35 3/8 in June and declined to 26. Stock has rallied back to 33. The objective is 33-37. Some further strength is indicated but the stock is approaching its objective. ' U. S. RUBBER reached a new high since 1947 on Friday at 51 3/8. This stock is not on our recommended list but it has a most interesting forma- tion. It was in a pronounced downtrer,d since the 1946 high of 80. At the June, 1949 low of 32, it appea.red to have reached its downside objective. Since then it has formed a very strong technical pattern. Would add the stock to recommended list on price declines. The potential upside ob- jective indicates the possibility of substantial price appreciation. Closing Averages Dow-Jones Industrials Dow-Jones Rails .September 29, 1950 EDlUND W. TABELL WALSTON, HOFFMAN & GOODWIN This hllYe memionrtenredsvtl'fIln is not some to or b. all construed . 611 of the s4Icuritiel oft.r Dr ,ollenaUon of mentfoned herein. The offofre.'golfnogbumyateorris11Ihaasn)'bereencurp/'feiep', rFedromby time to us as I!I timma.HeWr 0h1tonIn'fHoortmfmhao-nn o&nlyG, oIotdwISinbameady upon Information bell,'.-.d reliable but not necessarily complete, Is not guarant..d as accurate or final, and is not Intended to foreclose Independent inquiry. I I , 3' ..talill .. I ….. Iblll ,iL.'''''',II,I''''''1 .11..1111 I.