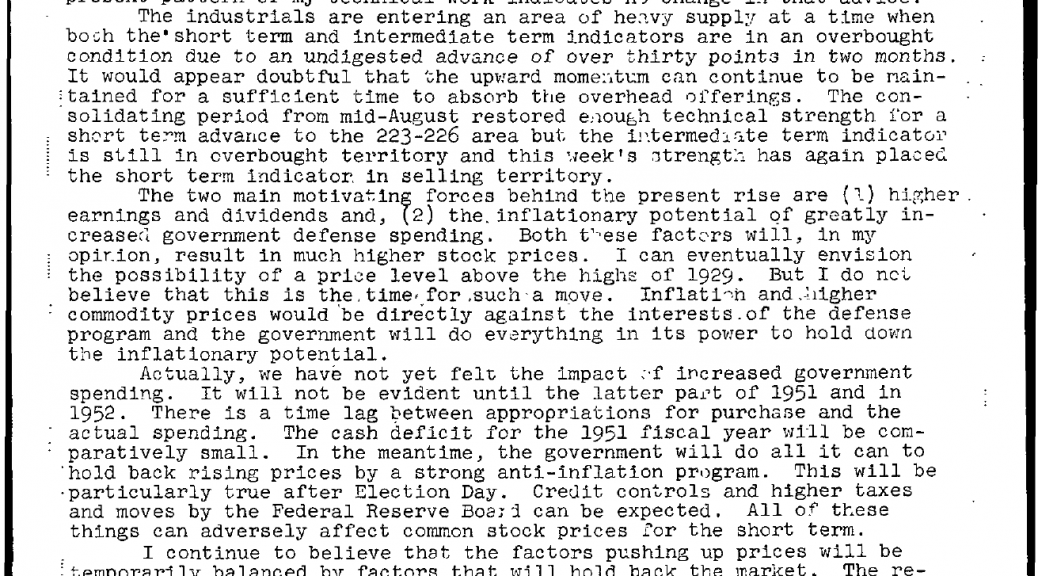 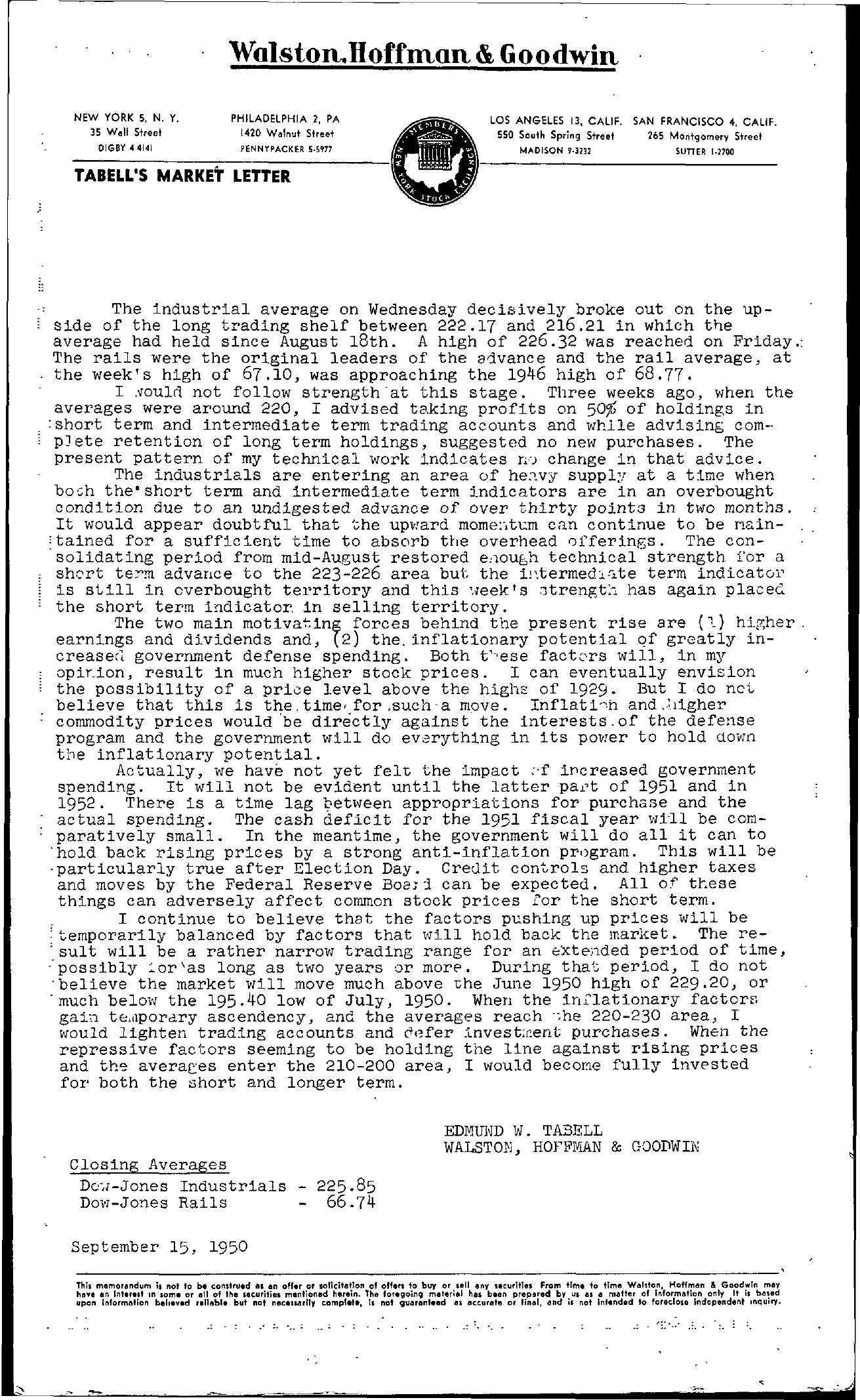 Walston.Hoffman &, Goodwin NEW YORK 5, N. Y. 35 WlI Street DIGBY 44141 PHILADELPHIA 2, PA 1420 Walnut Street PENNYPACKER 55977 TABELL'S MARKET LETTER LOS ANGELES 13, CALIF. 550 South Spring Street MADISON 93232 SAN FRANCISCO 4, CALIF. 265 Montgomery Street SUTIER 1-2700 The industrial average on Wednesday decisively broke out on the upside of the long trading shelf between 222.17 and 216.21 in which the average had held since August 18th. A high of 226.32 was reached on Friday. The rails were the original leaders of the advance and the rail average, at the week's high of 67.10, was approaching the 1946 high of 68.77. I .wulrl not follow strength at this stage. Three weeks ago, when the averages were around 220, I advised ta.king profits on 50 of' holdings in short term and intermediate term trading accounts and while adviSing com- pJ ete retention of long term holdings, suggested no nevI purchases. The present pattern of my technical work indicates n) change in that advice. The industrials are entering an area of he.cvy supplr at a time when boch the'short term and intermediate term indicators are in an overbought condition due to an undigested advance of over thirty pOints in two months. It would appear doubtful that 'che up\,iard mome,tum cnn continue to be rl8.in- tained for a suffic ient time to absorb the overhead ''Jfferings. The consolidating period from mid-August restored e. lou,h technical strength for a short te'm advance to the 223-226 area but the il'.termedlcte term ina.icatul' is still in overbought territory and this 'eek's ltrengt, has again placeC the short term indicator. in selling territory. The two main motivatin forces behind the present rise are (1,) hlr;her. earnlngs and dlvldends and, (2) the.lnflationary potential qf greatly increaser, government defense spending. Both t'ese factc'rs will, in my oplLion, result in much higher stock prices. I can eventually envision the possibility of a prLe level above the highs of 1929. But I do nei., believe that this is the. time, for ,such, a move. Inflati h and .,;l1gher commodity prices would 'be directly against the interests.of' the defense program and the government will do everything in its povler to hold down the inflationary potential. Actually, we have not yet felt the impact ;f iJ'1creased government spending. It will not be evident until the latter paLt of 1951 and in 1952. There is a time lag between appropriations for purchase and the actual spending. The cash deficit for the 1951 fiscal year will be comparatively small. In the meantime, the government will do all it can to .hold back rising prices by a strong anti-inflation pr,)gram. This will be particularly true after Election Day. Cre01t controls and higher taxes and moves by the Federal Reserve Boa;j can be expected. All of tese thlngs can adversely affect common stock prlces for the short term. , I continue to believe that the factors pushing up prices will be 'temporarily balanced by factors that will hold back the marlet. The re'suIt will be a rather narrow tradlng range for an E'xten.ded period of time, possibly or'as long as two years or more. During that period, I do not 'believe the market will move much above the June 1950 high of 229.20, or 'much below the 195.40 low of July, 1950. When the inflationary factorf gaLl t8.llpordry ascendency, and the averages reach ,he 220-230 area, I would lighten trading accounts and (l,f'er invest;ent purchases. When the repressive factors seeming to be holding the line against rising prices and th averaes enter the 210-200 area, I would becoe fully invested for' both the short and longer term. Closing Averages DO',1-Jones Industrials – 225.85 Dovi-Jones Rails 66.74 EDMmm W. TA3ELL WALSTml, HOFFl'flAN & GOODWIN September 15, 1950 This mamorandl,lm is not to b. construed Cli an oH.r or sollci'aUon of offers to buy or sell any securities From tiMe to time Wahton, Hoffman & Goodwin mey have an Int.r.st In 10m. or all of the securities mentioned herein The foregoing malerial has been prepred by 1,1, .n II matter of information only It is baled upon information beheved rellabl. but not necenarlly compl.t., II not guaranteed U o!Iccurate or final, and is not Intended to faradaiC! Indo pendent Inquiry. . .. – .. . .'. . … … – -,;;.–