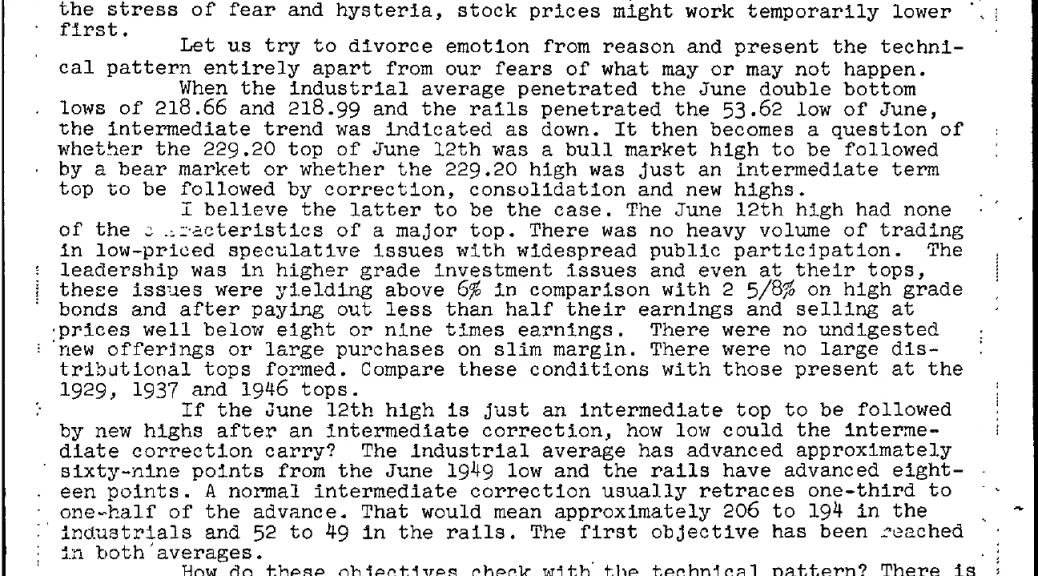 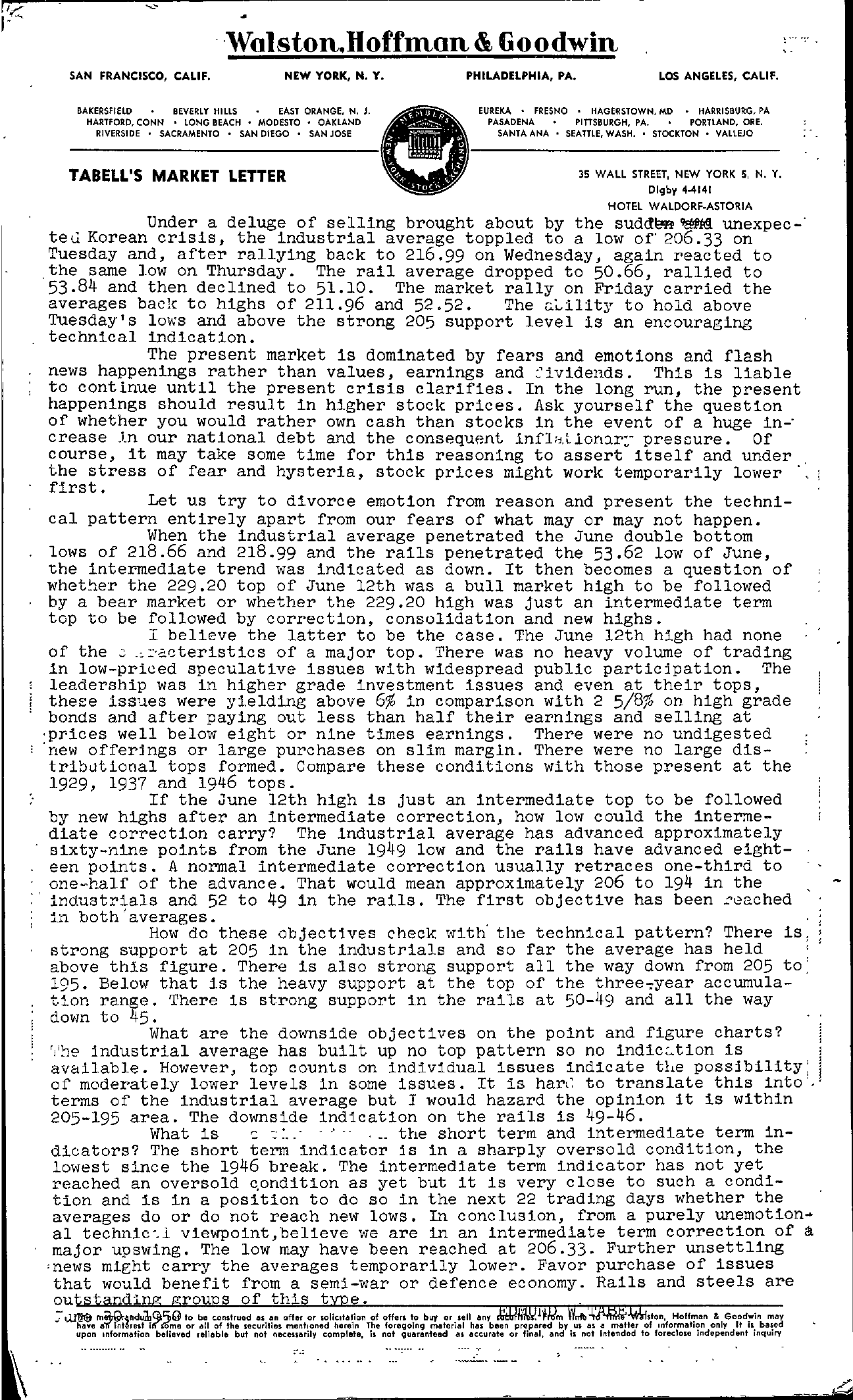 -Wolston.Hoffman (\ Goodwin SAN FRANCISCO, CALIF. NEW YORK, N. Y. PHILADELPHIA, PA. .-. '' . LOS ANGELES, CALIF. BAKERSfIELD BEVERLY HILLS EAST ORANGE, N. J. HARTfORD, CONN LONG BEACH MODESTO OAKLAND RIVERSIDE SACRAMENTO SAN DIEGO SAN JOSE EUREKA FRESNO HAGESTOWN. MD HARRISBURG, PA PASADENA PlnSBURGH, PA. PORTlAND, ORE. SANTA ANA SEATTLE, WASH . STOCKTON' VALLEJO TABEll'S MARKET lETTER 3S WALL STREET. NEW YORK 5. N. Y. Digby 4-4141 HOTEL WALDORF-ASTORIA Under a deluge of selling brought about by the suddeH unexpec-teG Korean crisis, the industrial average toppled to a low of' 206.33 on Tuesday and, after rallying back to 216.99 on Wednesday, again reacted to ,the same low on Thursday. The rail average dropped to 50.66, rallied to 53.84 and then declined to 51.10. The market rally on Friday carried the averages baclc to highs of 211. 96 and 52.52. The c.i.,ility to hold above Tuesday's 10KS and above the strong 205 support level is an encouraging technical indication. The present market is dominated by fears and emotions and flash news happenings rather than values, earnings and ' i vidends. This is liable to continue until the present crisis clarifies. In the long run, the present happenings should result in higher stock prices. Ask yourself the question of I'i'hether you would rather own cash than stocks in the event of a huge in– crease In our national debt and the consequent infl,,lonJ.r- pres cure . Of course, it may take some time for this reasoning to assert itself and under , the stress of fear and hysteria, stock prices might work temporarily lower first. Let us try to divorce emotion from reason and present the techni- cal pattern entirely apart from our fears of what mayor may not happen. When the industrial average penetrated the June double bottom lows of 218.66 and 218.99 and the rails penetrated the 53.62 low of June, the intermediate trend was indicated as down. It then becomes a question of wheter the 229.20 top of June 12th was a bull market high to be followed by a bear market or whether the 229.20 high was just an intermediate term top to be followed by correction, consolidation and new highs. r believe the latter to be the case. The June 12th high had none of the .; 0 -2cteristics of a major top. There was no heavy volume of trading in low-priced speculative issues with widespread public particjpation. The leadership was in higher grade investment issues and even at their tops, thece issues were yielding above 6 in comparison with 2 5/8 on high grade bonds and after paying out less than half their earnings and selling at 'prices well below eight or nine times earnings. There were no undigested 'new offerjngs or large purchases on slim margIn. There were no large distributional tops formed. Compare these conditions with those present at the 1929, 1937 and 1946 tops. If the June 12th high is just an intermediate top to be fOllowed by new highs after an intermediate correction, how low could the intermediate correction carry The industrial average has advanced approximately sixty-nine pOints from the June 1949 low and the rails have advanced eighteen points. A normal intermediate correction usually retraces one-third to -, one-half of the advance. That would mean approximately 206 to 194 in the -, industrials and 52 to 49 in the rails. The first objective has been 8ached 1.n both' averages. How do these objectives check with the technical pattern There is, strong support at 205 in the industrials and so far the average has held above this figure. There is also strong support all the way down from 205 to' 195. Below that is the heavy support at the top of the threeyear accumulation range. There is strong support in the rails at 50-49 and all the way down to 45. What are the downside objectives on the point and figure charts ',';e industrial average has built up no top pattern so no indicz.tion is available. However, top counts on individual issues indicate tbe possibility of moderately lower levelS 1.n some issues. It is harl to translate this into' terms of the industrial average but I would hazard the opinion it is within 205-195 area. The downside indication on the rails is 49-46. What is ' – – -' — , the short term and intermediate term in- dicators The short term indicator is in a sharply oversold condition, the lowest since the 1946 break. The intermediate term indicator has not yet reached an oversold c,onditlon as yet but it is very close to such a condi- tion and is in a position to do so in the next 22 trading days whether the averages do or do not reach new lows. In conclUSion, from a purely unemotion al technicl viewpoint,believe we are in an intermediate term correction of a major upswing. The low may have been reached at 206.33. Further unsettling 'news mieht carry the averages temporarily lower. Favor purchase of issues that would benefit from a semi-war or defence economy. Rails and steels are ou din rou s of this t e. If; h!l m,;'M1(!d;;.t.64rnedduilAdtbmQe to or be alt construed as an offer or solleltatlon of of the securities mentioned herel The offers to buy or sell any foregoing material has been .l m prepared by fl'fb us as a matter ston, Hoffman & Goodwin may of Information only It is bas(1d upon Information believed reliable but not naceullTily complete, Is not fi1uaranteed 5 aCCUfo!lte or final, and 11 not Intended to foreclose Independent inquiry