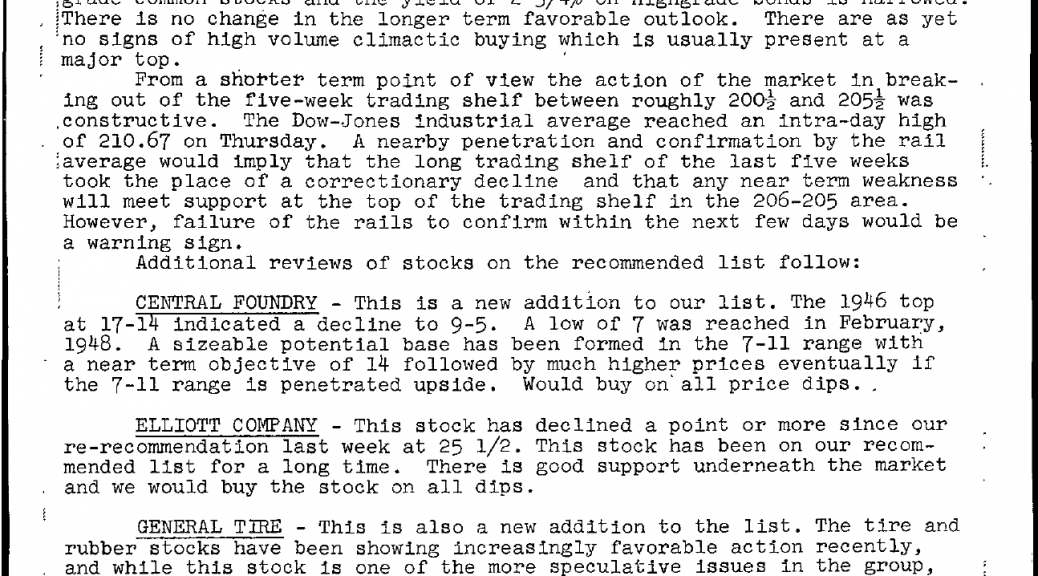 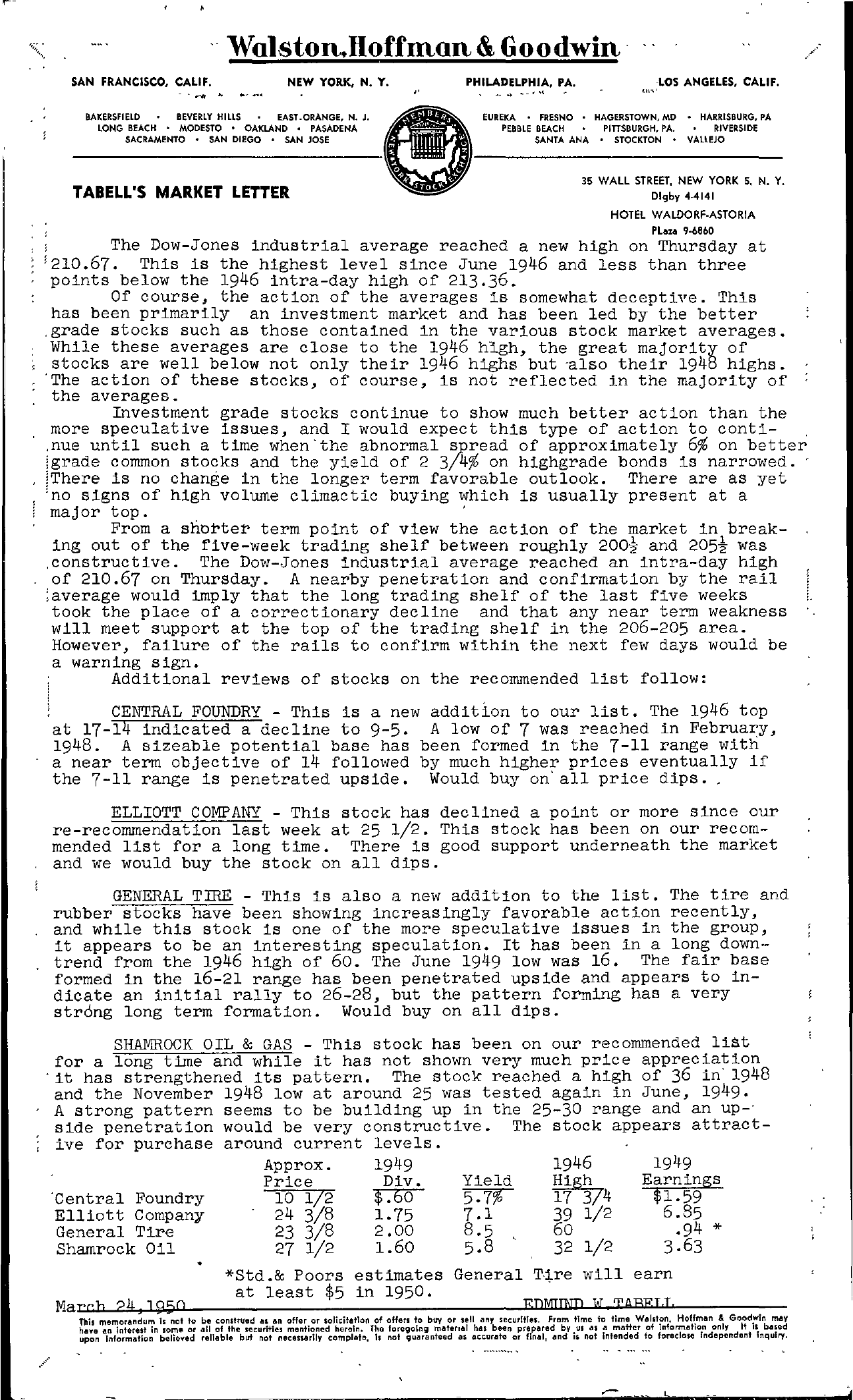 – Wolston.Hoffmon &, Goodwin' SAN FRANCISCO, CALIF. NEW YORK, N. Y. BAKERSFIELD BEVERLY HILLS EASTORANGE, N. J. LONG BEACH MODESTO OAKLAND PASADENA SACRAMENTO SAN DIEGO SAN JOSE ,. PHILADELPHIA, PA. . -, – , -, LOS ANGELES, CALIF. EUREKA FRESNO HAGERSTOWN, MD HARRISBURG, PA PEBBLE BEACH PITTSBURGH, PA. RIVERSIDE SANTA ANA STOCKTON VAllEJO – TABELL'S MARKET LETTER 35 WALL STREET. NEW YORK 5. N. Y. Digby 44141 HOTEL WALDORFASTORIA Plaza 9-6860 , The Dow-Jones industrial average reached a new high on Thursday at '210.67. This is the highest level since June 1946 and less than three pOints below the 1946 intra-day high of 213.36. Of course, the action of the averages is somewhat deceptive. This has been primarily an investment market and has been led by the better .grade stocks such as those contained in the various stock market averages. While these averages are close to the 1946 high, the great majority of stocks are well below not only their 1946 highs but 'also their 194e highs. 'The action of these stocks, of course, is not reflected in the majority of the averages. Investment grade stocks continue to show much better action than the more speculative issues, and I would expect this type of action to conti- , .nue until such a time when'the abnormal spread of approximately 6 on better jgrade common stocks and the yield of 2 3/4 on highgrade bonds is narrowed .. !There is no change in the longer term favorable outlook. There are as yet 'no signs of high volume climactic buying which is usually present at a major top. . From a shorte term point of view the action of the market in breaking out of the five-week trading shelf between roughly 200 and 205 was ,constructive. The Dow-Jones industrial average reached an intra-day high Iof 210.67 on Thursday. A nearby penetration and confirmation by the rail ;average would imply that the long trading shelf of the last five weeks took the place of a correctionary decline and that any near term weakness will meet support at the top of the trading shelf in the 206-205 area. However, failure of the rails to confirm within the next few days would be a warning sign. Additional reviews of stocks on the recommended list follow CENTRAL FOUNDRY – This is a new addition to our list. The 1946 top at 17-14 indicated a decline to 9-5. A low of 7 was reached in February, 1948. A sizeable potential base has been formed in the 7-11 range with a near term objective of 14 foll0l1ed by much higher prices eventually if the 7-11 range is penetrated upside. Would buy on' all price dips .. ELLIOTT COMPANY – This stock has declined a point or more since our re-recommendation last week at 25 1/2. This stock has been on our recommended list for a long time. There is good support underneath the market and we would buy the stock on all dips. GENERAL TIRE – This is also a new addition to the list. The tire and rubber stocks have been showing increasingly favorable action recently, and while this stock is one of the more speculative issues in the group, it appears to be an interesting speculation. It has been in a long downtrend from the 1946 high of 60. The June 1949 low was 16. The fair base formed in the 16-21 range has been penetrated upside and appears to indicate an initial rally to 26-28, but the pattern forming has a very strong long term formation. Would buy on all dips. SIDUOCK OIL & GAS – This stock has been on our recommended list for a long time and while it has not shown very much price appreciation 'it has strengthened its pattern. The stock reached a high of 36 in'1948 and the November 1948 low at around 25 was tested again in June, 1949. A strong pattern seems to be building up in the 25-30 range and an up-' side penetration would be very constructive. The stock appears attract- ive for purchase around current levels. 'Central Foundry Elliott Company General Tire Approx. Price 10 1/2 24 3/8 23 3/8 1949 Div. .60 1.75 2.00 Yield 5.7 7.1 8.5 1946 17 3/4 39 1/2 60 1949 Earnings 1.59 6.85 .94 Shamrock Oil 27 1/2 1.60 5.8 32 1/2 3.63 Std.& Poors estimates General Tire will earn at least 5 in 1950. March 24 '950 This memoranum b not to be construed as an offer or solicitation of offen to buy or sell any EDMUND W securities. From time to TAREI.T, time Walstnt Hoff.man & Goodwin mav have an Interest In some or all of the securities mentioned herein. Tho foregoing materllil has been prepared bV us as a matter of InformatIon on IV It Is based upon Information believed reliable but not necessarily complete, Is not ejluarllnteed as accurate or final, and i, not Intended to foroclose Independent Inquiry. i