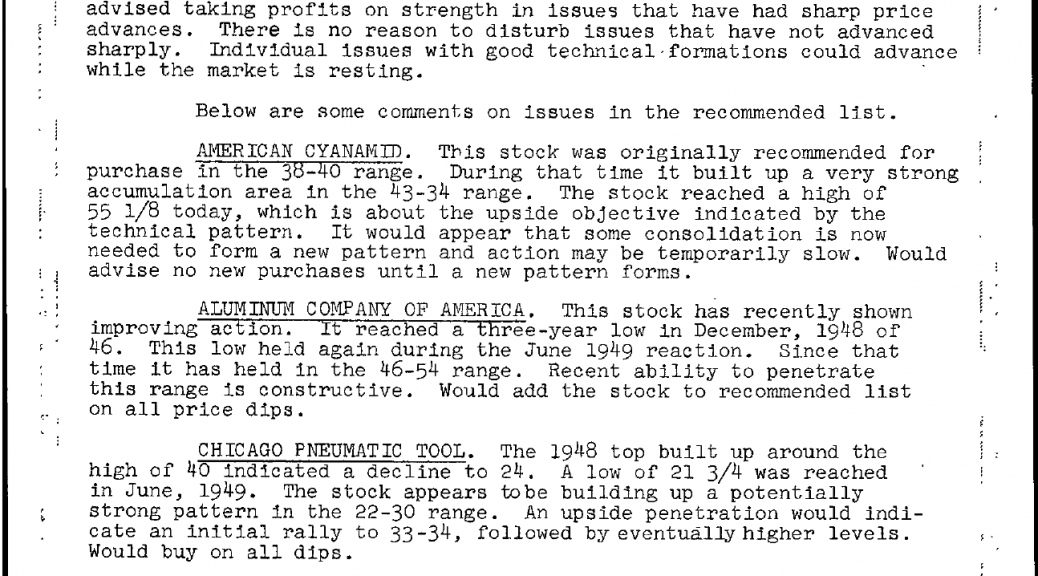 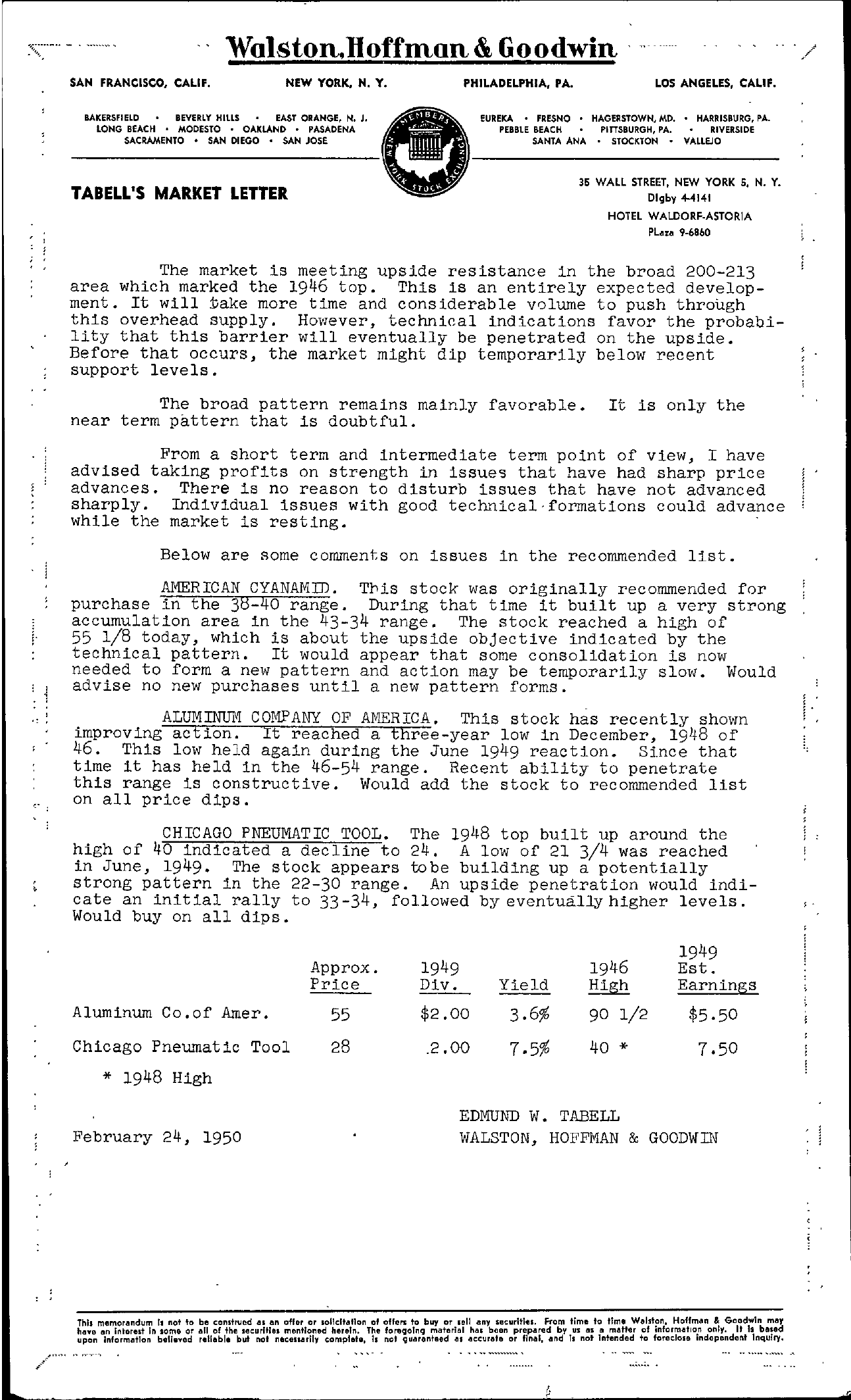 Walston.Hoffman &, Goodwin SAN FRANCISCO, CALIF. NEW YORK, N. Y. PHILADELPHIA, PA. LOS ANGELES, CALIF. BAKERSFIELD BEVERLY HILLS EAST ORANGE, N. J. LONG BEACH MODESTO OAKLAND PASADENA SACRAMENTO SAN DIEGO SAN JOSE EUREKA FRESNO HAGERSTOWN, MD. HARRISBURG, PA. PEBBLE BEACH PITISBURGH, PA. RIVERSIDE SANTA ANA STOCKTON VALLEJO TABELL'S MARKET LETTER 35 WALL STREET, NEW YORK 5. N. Y. Digby 4-4141 HOTEL WALDORF.ASTORIA PLna 9-6860 ,- The market is meeting upside resistance in the broad 200-213 area which marked the 1946 top. This is an entirely expected develop- ment. It will take more time and considerable volume to push through this overhead supply. However, technical indications favor the probability that this barrier will eventually be penetrated on the upside. Before that occurs, the market might dip temporarily below recent support levels. The broad pattern remains mainly favorable. It is only the near term pattern that is doubtful. From a short term and intermediate term point of view, I have advised taking profits on strength in issues that have had sharp price advances. There is no reason to disturb issues that have not advanced sharply. Individual issues with good technical-formations could advance while the market is resting. – Below are some comments on issues in the recommended list. AMERICAN CYANAMID. Tpis stock was originally recommended for purchase in the 38-40 range. During that time it built up a very strong accumulation area in the 43-34 range. The stock reached a high of 55 1/8 today, which is about the upside objective indicated by the technical pattern. It would appear that some consolidation is now needed to form a new pattern and action may be temporarily slow. Would advise no new purchases until a new pattern forms. , . , ALUMIN1.m COMPANY OF AMERICA. This stock has recently shown ,, 1, , improving action. It reached a three-year low in December, 1948 of 46. This low held again during the June 1949 reaction. Since that time it has held in the 46-54 range. Recent ability to penetrate this range is constructive. Would add the stock to recommended list on all price dips. CHICAGO PNEUMATIC TOOL. The 1948 top built up around the high of 40 indicated a decline to 24. A low of 21 3/4 was reached in June, 1949. The stock appears tobe building up a potentially strong pattern in the 22-30 range. An upside penetration would indicate an initial rally to 33-34, followed by eventwUlyhigher levels. Would buy on all dips. ,- Aluminum Co.of Amer. Chicago Pneumatic Tool 1948 High Approx. Price 55 28 1949 Div. 2.00 .2.00 Yield 3.6 7.5 1946 High 90 1/2 40 1949 Est. Earnings 5.50 7.50 February 24, 1950 EDMUND W. TABELL WALSTON, HOFFMAN & GOODWIN This memorandum II not to be construed as an offer or sollcltatlon of offers to buy or lell any secur1tles. From time to ttme Walston, Hoffman & Goodwin may have an Intored In some or all of the lecurltlu mentioned herein. The fore;olng materilll hu been prepared bv us III II matter of information only. It lSI bated upon Information belleyed reliable but not necenarlly complete, Is not toIuaranteed as accurllte or final, and Is not Intended to foreclose Independent nqu ry.