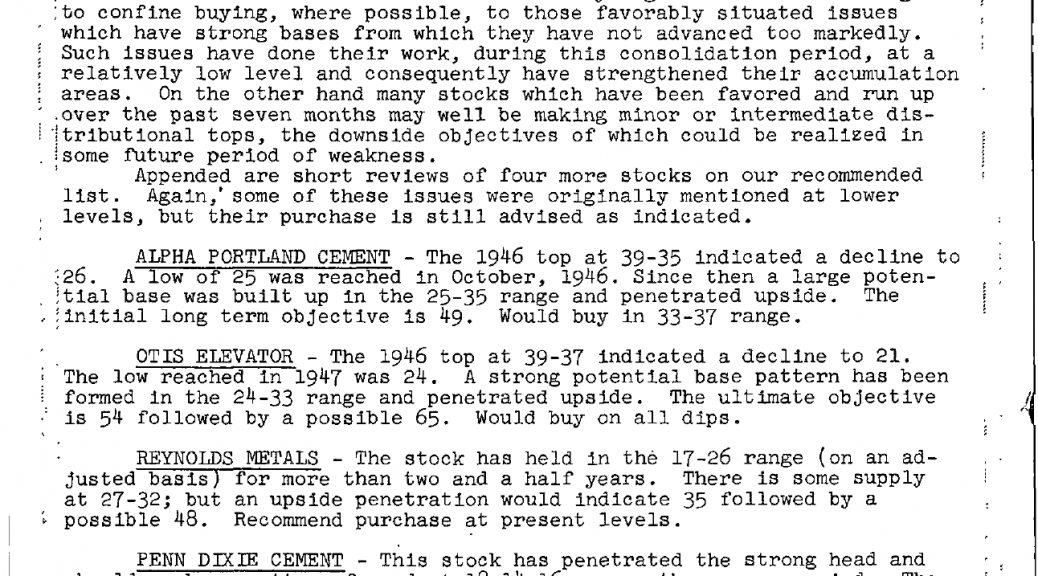 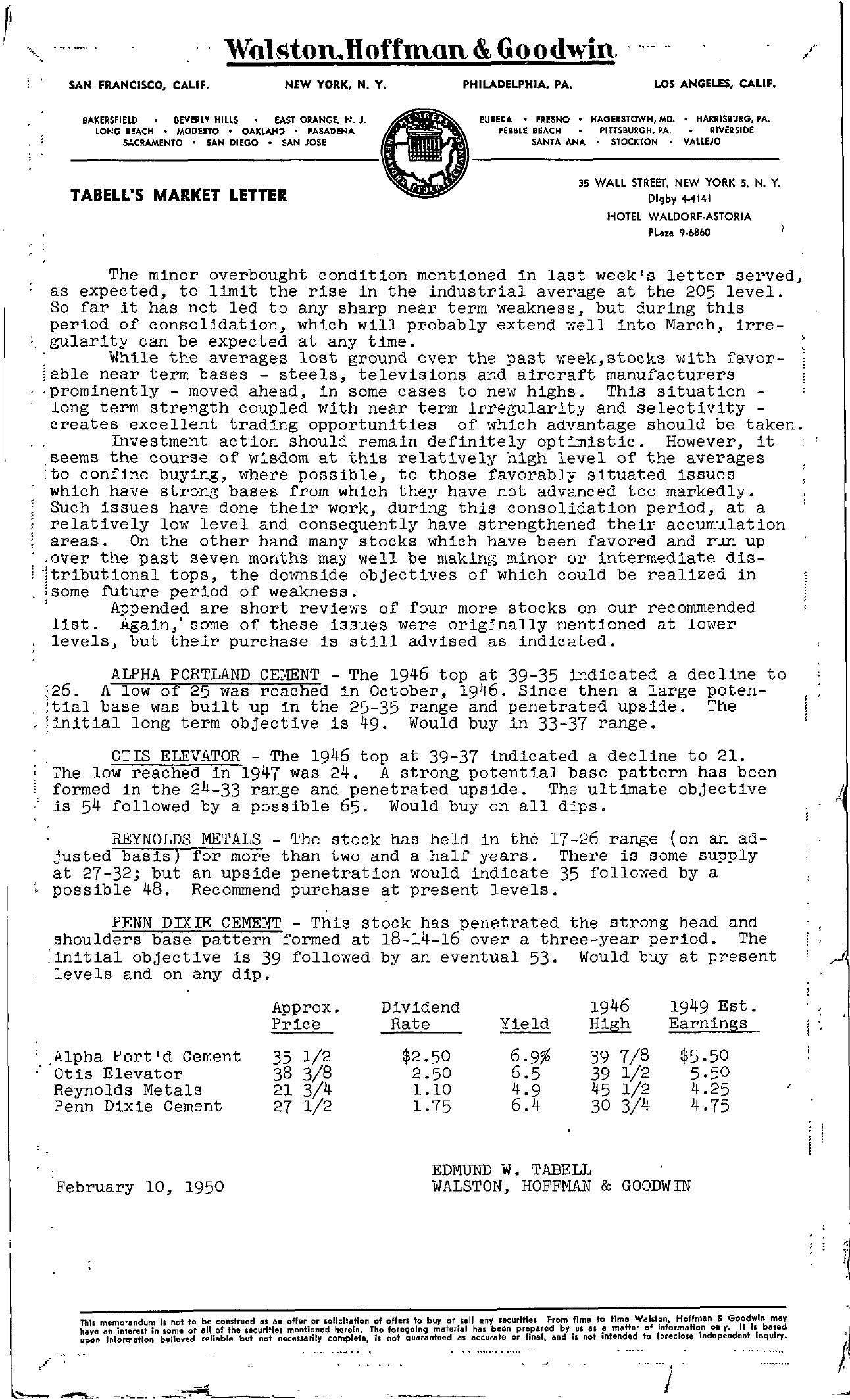 ,f' Wolston.Hoffmon &, Goodwin / SAN FRANCISCO, CALIF. NEW YORK, N. Y. PHILADELPHIA, PA. LOS ANGELES. CALIF. BAKERSFIELD BEVERLY HILLS EAST ORANGE.. N. J. LONG BEACH MODESTO OAKLAND PASADENA SACRAMENTO SAN 01 EGO SAN JOSE EUREKA FRESNO HAGERSTOWN, MD. HARRISBURG, PA. PEBBLE BEACH PITISBURGH, PA, RIVERSIDE SANTA ANA STOCKTON VALLEJO TABELL'S MARKET LETTER 35 WALL STREET. NEW YORK S. N. Y. Digby 4-4141 HOTEL WALDORF.ASTORIA PLo.. 96800 The minor overbought condition mentioned in last week's letter served,' as expected, to limit the rise in the industrial average at the 205 level. So far it has not led to any sharp near term weakness, but during this period of consolidation, which will probably extend well into March, irregularity can be expected at any time. . While the averages lost ground over the past week, stocks with favorjable near term bases – steels, televisions and aircraft manufacturers 'prominently – moved ahead, in some cases to new highs. This situation – long term strength coupled with near term irregularity and selectivity creates excellent trading opportunities of which advantage should be taken. , Investment action should remain definitely optimistic. However, it .seems the course of wisdom at this relatively high level of the averages to confine buying, where possible, to those favorably situated issues which have strong bases from which they have not advanced too markedly. Such issues have done their work, during this consolidation period, at a relatively low level and consequently have strengthened their accumulation areas. On the other hand many stocks which have been favored and run up .. over the past seven months may well be making minor or intermediate dis- i 'jtributional tops, the downside objectives of which could be realized in isome future period of weakness. , Appended are short reviews of four more stocks on our recommended list. Again,' some of these issues were originally mentioned at lower levels, but their purchase is still advised as indicated. ALPHA PORTLAND CEMENT – The 1946 top at 39-35 indicated a decline to 26. A low of 25 was reached in October, 1946. Since then a large poten!tial base was built up in the 25-35 range and penetrated upside. The initial long term objective is 49. Would buy in 33-37 range. OTIS ELEVATOR – The 1946 top at 39-37 indicated a decline to 21 . . The low reached in 1947 was 24. A strong potential base pattern has been i formed in the 24-33 range and penetrated upside. The ultimate objective .' is 54 followed by a possible 65. Would buy on all dips. REYNOLDS METALS – The stock has held in the 17-26 range (on an ad- justed basis) for more than two and a half years. There is some supply at 27-32; but an upside penetration would indicate 35 followed by a , possible 48. Recommend purchase at present levels. PENN DIXIE CEMENT – This stock has penetrated the strong head and shoulders base pattern formed at 18-14-16 over a three-year period. The ;initial objective is 39 followed by an eventual 53. Would buy at present levels and on any dip. Approx. Price DiVidend Rate Yield 1946 High 1949 Est. Earnin!!is .Alpha Port'd Cement Otis Elevator Reynolds Metals Penn Dixie Cement 35 1/2 38 3/8 21 3/4 27 1/2 2.50 2.50 1.10 1. 75 6.9 6.5 4.9 6.4 39 7/8 39 1/2 45 1/2 30 3/4 5.50 5.50 4.25 4.75 , . February 10, 1950 EDMUND W. TABELL WALSTON, HOFFMAN & GOODWIN This memorandum Is not have .!In Interest In lome to or bIeI construed as an of the lecuritlel offer Of solicitatIon of mentioned herein. The offofreersotlon9bumyteOrfiaslellhaalnybesMecurpirtieepsareFdrobmy time to .us as a time Wo!IIston, Hoffman 3 GoodwIn may matter of information oniy. it Is based upon Information belle'fed fellable but not necessarily complet., Is not guaranteed as accurate or final, and II not Intended to foreclole Independent Inquiry. J r;j .