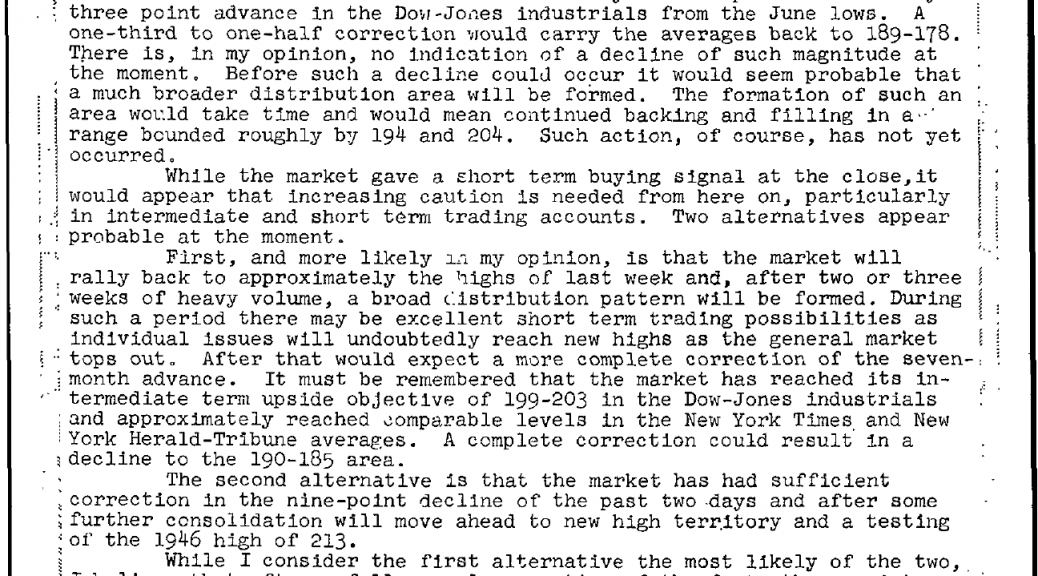 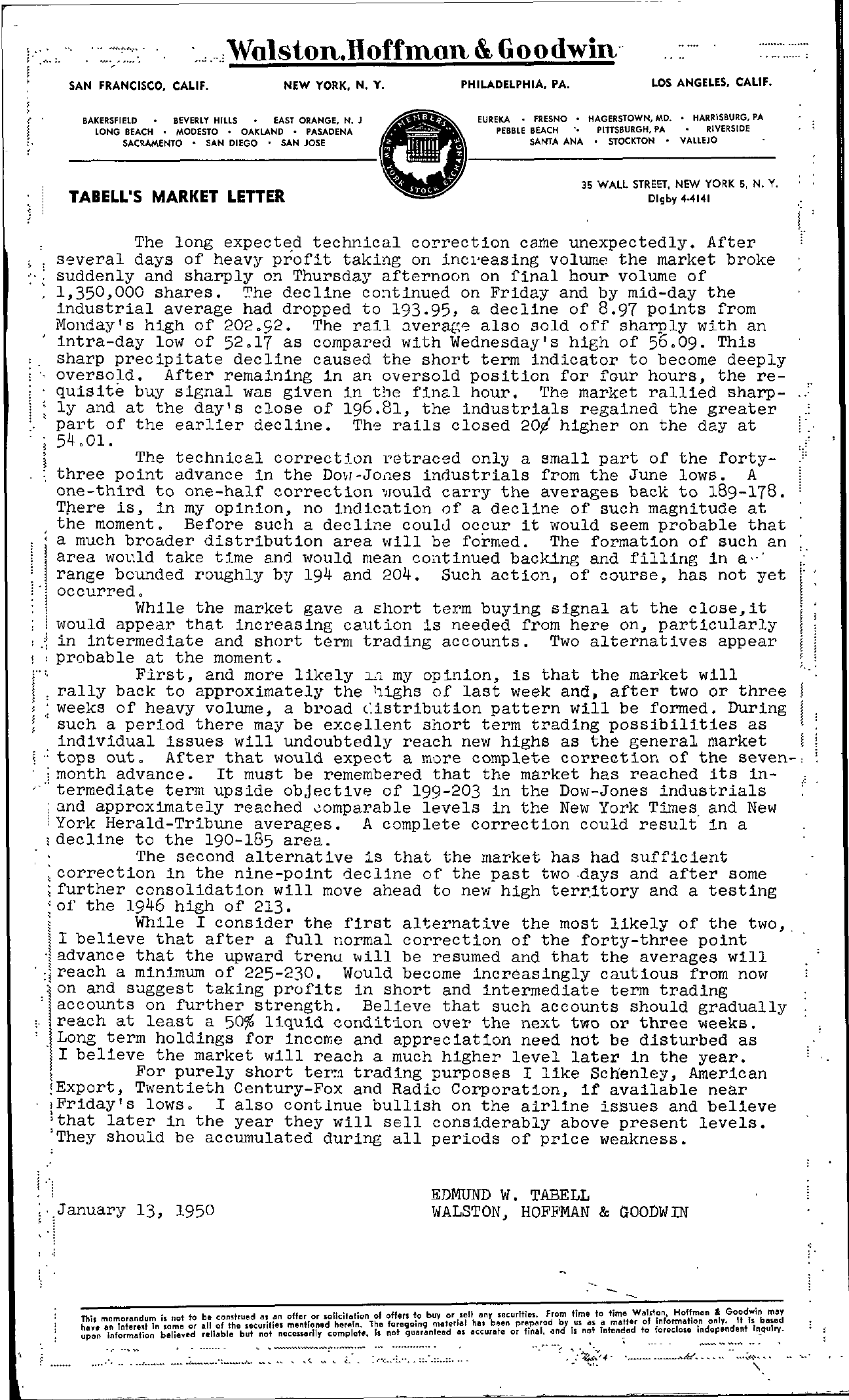 r- ,J,'…'.. . . ,. ,..;Wolston.Hoffmon &, Goodwin ,i SAN FRANCISCO, CALIF. NEW YORK, N, Y. PHILADELPHIA, PA. LOS ANGELES, CALIF. BAKERSFIELD BEVERLY HILLS EAST ORANGE, N. J LONG BEACH MODESTO OAKLAND PASADENA SACRAMENTO SAN DIEGO SAN JOSE EUREKA FRESNO HAGERSTOWN, MD. HARRISBURG, fA PEBBLE BEACH P1TISBURGH, PA RIVERSIDE SANTA ANA STOCKTON VAllEJO TABELL'S MARKET LETTER 35 WALL STREET, NEW YORK 5, N. Y. Digby 4,4141 The long expected technical correction came unexpectedly. After ; ; s9veral days of heavy profit taking on incl'easing volUJne the market broke .', suddenly and sharply on Thursday afternoon on final hour volUJne of 1,350,000 shares. he decline continued on Friday and by mid-day the industrial average had dropped to 193.95, a decline of 8.97 pOints from Monday's high of 202.92. The rail lverag! also sold off sharply with an intra-day low of 52.17 as compared with Wednesday's high of 56.09. This sharp precipitate decline caused the short term indicator to become deeply oversold. After remaining in an oversold position for four hours, the re- .. qUisite buy signal was given in tile final hour. The market rallied sharp- ly and at the day's close of 196.81, the industrials regained the greater part of the earlier decline. Th9 rails closed 201 higher on the day at 54.01. .' The technic2.1 correctlon retraced onl;y a small part of the forty- three point advance in the DOH -Jon,es industrials from the June lows. A one-third to one-half correction 'ilould carry the averages back to 189-178. T)1ere is, in my opinion, no indication of a decline of such magnitude at the moment. Before such a decline coulJ occur it would seem probable that a much broader distribution area will be formed. The formation of such an ;.!j area wOl,ld take time and would mean continued backing and filling in a, range bounded roughly by 194 and 204. Such action, of course, has not yet .11 , i occurred. I; 1 While the market gave a Ellort term buying signal at the close,it ; i would appear that. increasing caution is needed from here on, particularly , ,; in intermediate and short term t.rading accounts. Two alternatives appear ! ! ' probable at the moment. ' I .''''. First, and more likely n my opinion, is that the market will rally back to approximately the l1ighs of last week and, after two or three , . weeks of heavy volUJne, a broad (ist.ributlon pattern will be formed. During . such a period there may be excellent short term trading possibilities as individual issues will undoubtedly reach new highS as the general market ! \ . tops out. After that would expect a more complete correction of the seven-, imonth advance. It must be remembered that the market has reached its in…. termediate term upside objective of 199-203 in the Dow-Jones industrials ' ; lnd approximately reached ..!omparable levels in the New York Times and New i York Herald-Tribune averages. A complete correction could result' in a decline to the 190-185 area. The second alternative is t.hat the market has had sufficient ; correction in the nine-point decline of the past two ,days and after some ; further consolidation will move ahead to new high terr.itory and a testing 01' the 1946 high of 213. I While I consider the first alternative the most likely of the two,. 1I believe that after a full normal correction of the forty-three point .j advance that the upward trenu \,ill be resumed and that the averages will 'ireach a minLUJn of 225-230. Would become increasingly cautious from now .; on and suggest taking profits in short and intermediate term trading \accounts on further strength. Believe that such accounts should gradually ;. reach at least a 50 liquid condit'ion over the next two or three weeks. 'ILong term holdings for income and appreciation need not be disturbed as II believe the market will reach a much higher level later in the year. l For purely short teF.1 trading purposes I like Schenley, American Export, Twentieth Century-Fox and Radio Corporation, if available near lFriday's lows. I also contInue bullish on the airline issues and believe lthat later in the year they will sell considerably above present levels. 'They should be accumulated during all periods of price weakness. ; .. January 13, 1950 .j ,i – EDMUND W. TABELL WALSTON, HOFFMAN & GOODWIN – f ……. r …. . . . . . . . . . . . .