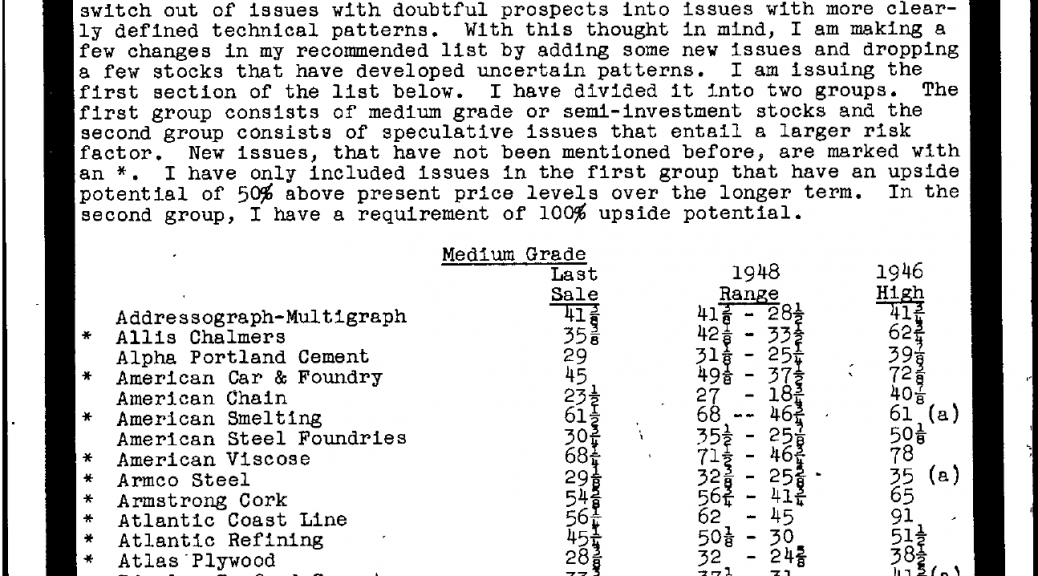 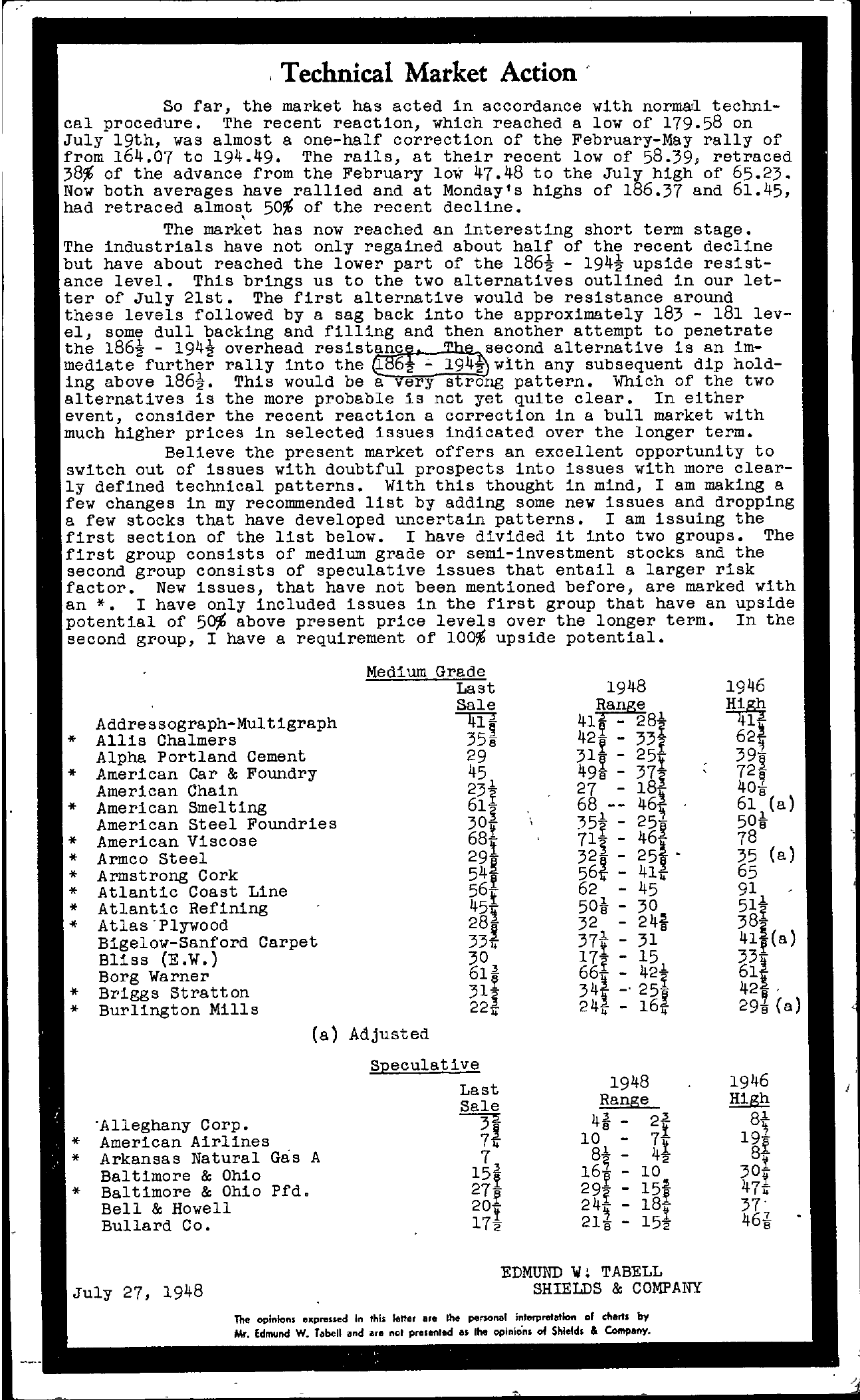 , Technical Market Action So far, the market has acted in accordance with norma techni- cal procedure. The recent reaction, which reached a low of 179.58 on July 19th, was almost a one-half correction of the February-May rally of from 164.07 to 194.49. The rails, at their recent low of 58.39, retraced 38 of the advance from the February low 47.48 to the July high of 65.23. Now both averages have rallied and at Monday1s highs of 186.37 and 61.45, had retraced almos,t 50 of the recent decline. The market has now reached an interesting short term stage. industrials have not only regained about half of the recent decline have about reached the lower part of the 186t – 194t upside resist- ance level. This brings us to the two alternatives outlined in our let- ter of July 21st. The first alternative would be resistance around these levels followed by a sag back into the approximately 183 – 181 lev- el, some dull backing and filling and then another attempt to penetrate the 186t – 194t overhead resistanc second alternative is an im- mediate further rally into the 62 1942 with any subsequent dip hold- ing above 186t. This would be a ery strong pattern. Which of the two alternatives is the more probable is not yet quite clear. In either event, consider the recent reaction a correction in a bull market with much higher prices in selected issues indicated over the longer term. Believe the present market offers an excellent opportunity to switch out of issues with doubtful prospects into issues with more clear- ly defined technical patterns. With this thought in mind, I am making a few changes in my recommended list by adding some new issues and dropping a few stocks that have developed uncertain patterns. I am issuing the first section of the list below. I have divided it into two groups. The first group consists of medium grade or semi-investment stocks and the second group consists of speculative issues that entail a larger risk factor. New issues, that have not been mentioned before, are marked with an . I have only included issues in the first group that have an upside potential of 50 above present price levels over the longer term. In the second group, I have a requirement of 100 upside potential. Addressograph-Multigraph Allis Chalmers Alpha Portland Cement American Car & Foundry American Chain American Smelting American Steel Foundries American Viscose Armco Steel Armstrong Cork Atlantic Coast Line Atlantic Refining Atlas .Plywood Bigelow-Sanford Carpet Bliss (E.W.) Borg Warner Briggs Stratton Burlington Mills Medium Grade Last Sale Iill 35i 29 45 231. 611. 362255408968543111f1. 33! 30 61 311 2234. (a) Adjusted Alleghany Corp. American Airlines Arkansas Natural Gas A Baltimore & Ohio Baltimore & Ohio Pfd. Bell & Howell Bullard Co. Speculative Last 71-Syale 7 21751 21704f July 27, 1948 EDMUND 1M TABELL SHIELDS & COMPANY The opinJons expressed In .hls letter are tho personal interpretatJon of cttarts by Mr. Edmund W. labell and .re not presented as lhe oplnio'n, of Shields &. Company. , I