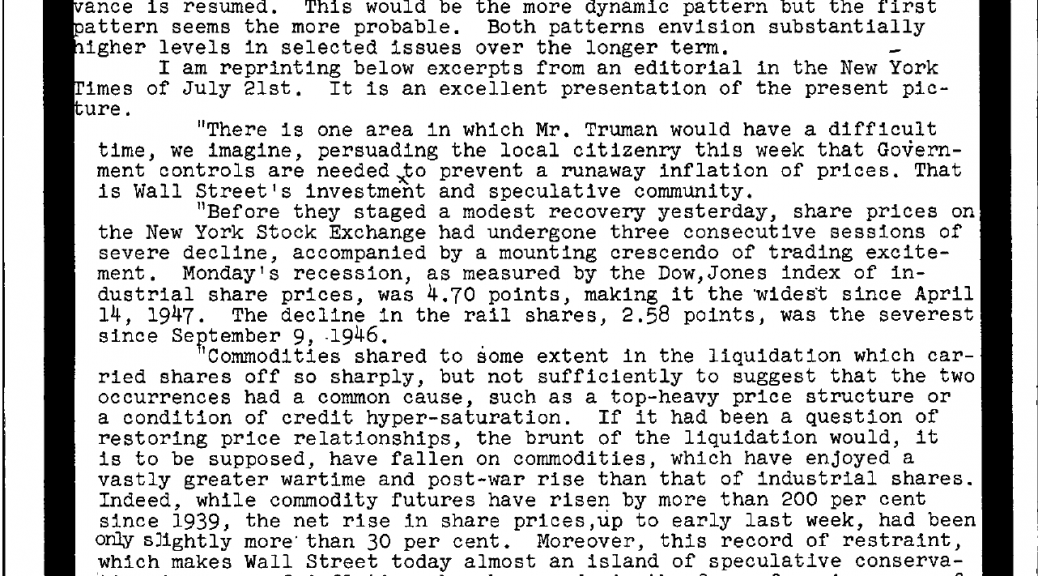 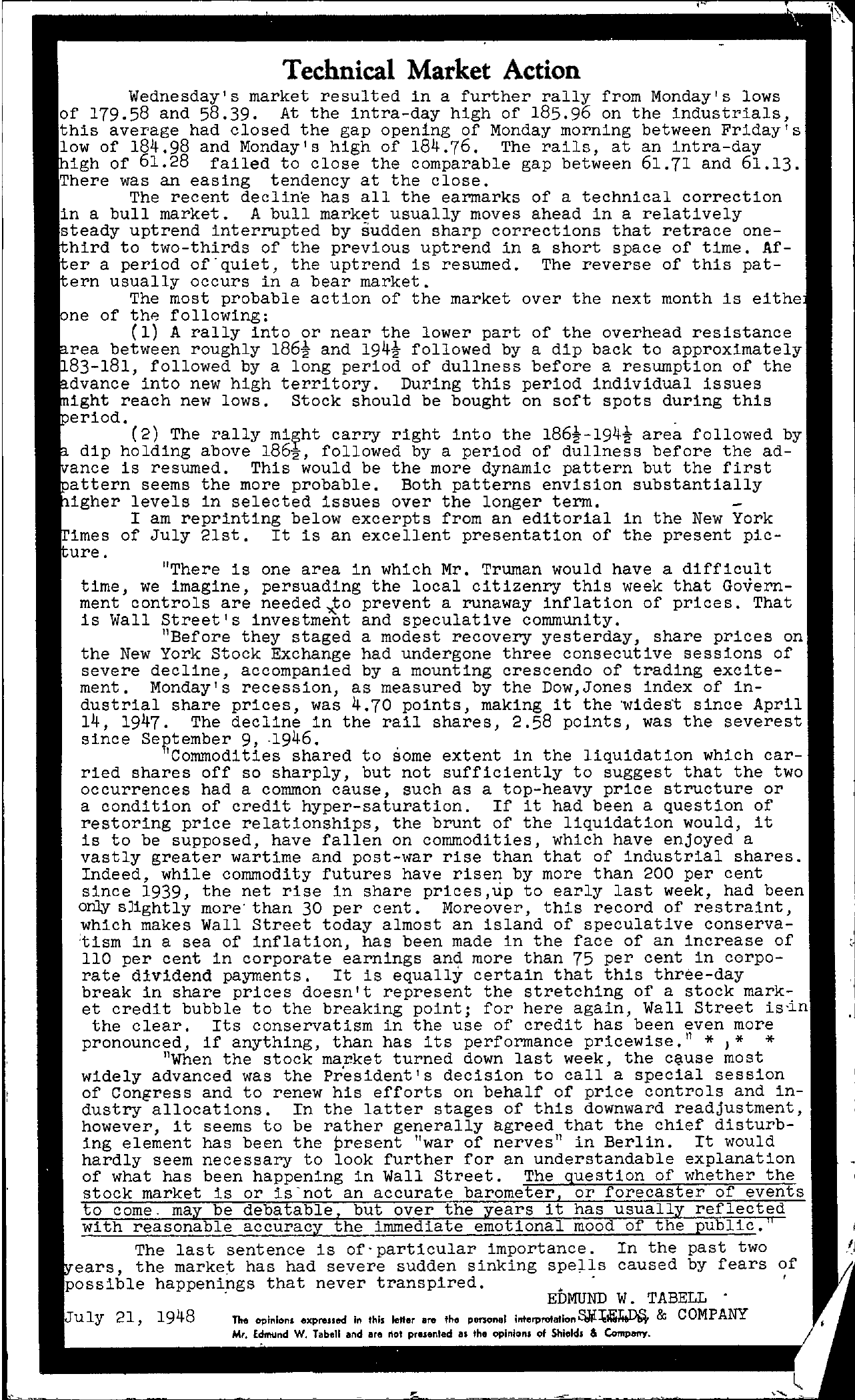 Technical Market Action Wednesday's market resulted in a further rally from Monday's lows 179.58 and 58.39. At the intra-day high of 185.96 on the industrials, s average had closed the gap opening of Monday morning between Friday's of 184.98 and Monday's high of 184.76. The rails, at an intra-day of 61.28 failed to close the comparable gap between 61.71 and 61.13. re was an easing tendency at the close. The recent decline has all the earmarks of a technical correction a bull market. A bull market usually moves ahead in a relatively teady uptrend interrupted by sudden sharp corrections that retrace one- to two-thirds of the previous uptrend in a short space of time. Afer a period of ' quiet, the uptrend is resumed. The reverse of this pat- ern usually occurs in a bear market. The most probable action of the market over the next month is eit of thA following (1) A rally into or near the lower part of the overhead resistance rea between roughly 186t and 194 followed by a dip back to approximately 3-181, followed by a long period of dullness before a resumption of the dvance into new high territory. During this period individual issues ght reach new lows. Stock should be bought on soft spots during this riod. (2) The rally miht carry right into the 186-194 area followed by dip holding above 1862 , followed by a period of dullness before the adnce is resumed. This would be the more dynamic pattern but the first ttern seems the more probable. Both patterns envision substantially gher levels in selected issues over the longer term. I am reprinting below excerpts from an editorial in the New York of July 21st. It is an excellent presentation of the present pic- There is one area in which Mr. Truman would have a difficult time, we imagine, persuading the local citizenry this week that Government controls are neededo prevent a runaway inflation of prices. That is Wall Street's investment and speculative community. Before they staged a modest recovery yesterday, share prices on the New York Stock Exchange had undergone three consecutive sessions of severe decline, accompanied by a mounting crescendo of trading excitement. Monday's recession, as measured by the Dow,Jones index of industrial share prices, was 4.70 points, making it the 'wides't since April 14, 1947. The decline in the rail shares, 2.58 points, was the severest since SeRtember 9, ,1946. 'Commodities shared to some extent in the liquidation which car- ried shares off so sharply, but not sufficiently to suggest that the two occurrences had a common cause, such as a top-heavy price structure or a condition of credit hyper-saturation. If it had been a question of restoring price relationships, the brunt of the liquidation would, it is to be supposed, have fallen on commodities, which have enjoyed a vastly greater wartime and post-war rise than that of industrial shares. Indeed, while commodity futures have risen by more than 200 per cent since 1939, the net rise in share prices,up to early last week, had been omy slightly more'than 30 per cent. Moreover, this record of restraint, which makes Wall Street today almost an island of speculative conservatism in a sea of inflation, has been made in the face of an increase of 110 per cent in corporate earnings and more than 75 per cent in corporate dividend payments. It is equally certain that this three-day break in share prices doesn't represent the stretching of a stock market credit bubble to the breaking point; for here again, Wall Street is the clear. Its conservatism in the use of credit has been even more pronounced, if anything, than has its performance pricewise. ) When the stock mapket turned down last week, the cuse most widely advanced was the President's decision to call a special session of Congress and to renew his efforts on behalf of price controls and industry allocations. In the latter stages of this downward readjustment, however, it seems to be rather generally agreed that the chief disturbing element has been the present war of nerves in Berlin. It would hardly seem necessary to look further for an understandable explanation of what has been happening in Wall Street. The question of whether the stock market is or is'not an accurate barometer, or forecaster of events to come, may be debatable, but over the years it has usually reflected with reasonable accuracy the immediate emotional mood of the public. The last sentence is of'particular importance. In the past two s, the market has had severe sudden sinking spells caused by fears of ssible happenings that never transpired. . EDMUND W. TABELL . 1948 The opinion. exprossed in 1M, letTer aro 110 penonal inle,reIlon & COMPANY Mr. Edmund W. label! and are 1101 presented as the opinions of Shields &. Company. .1