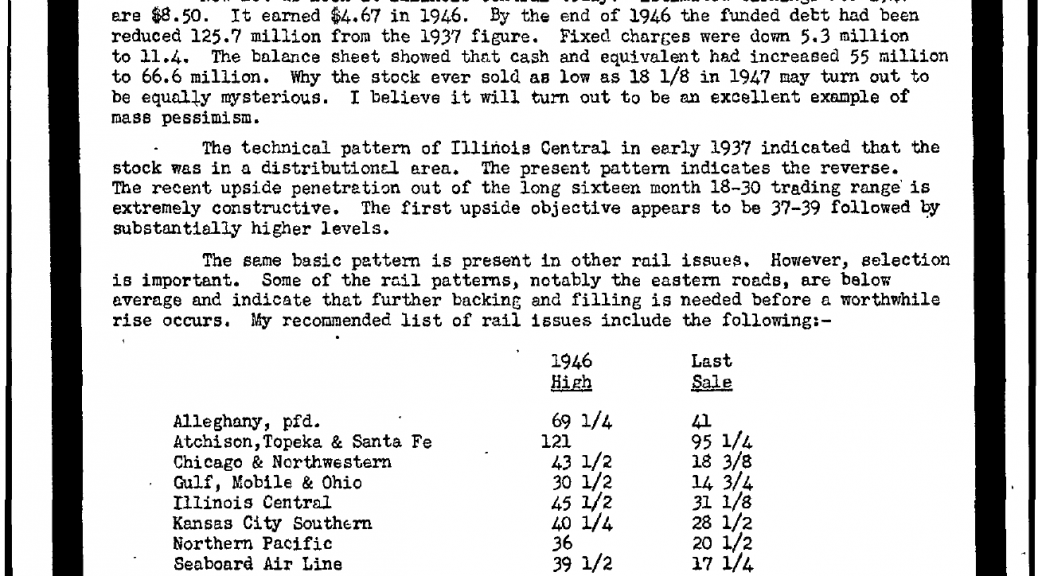 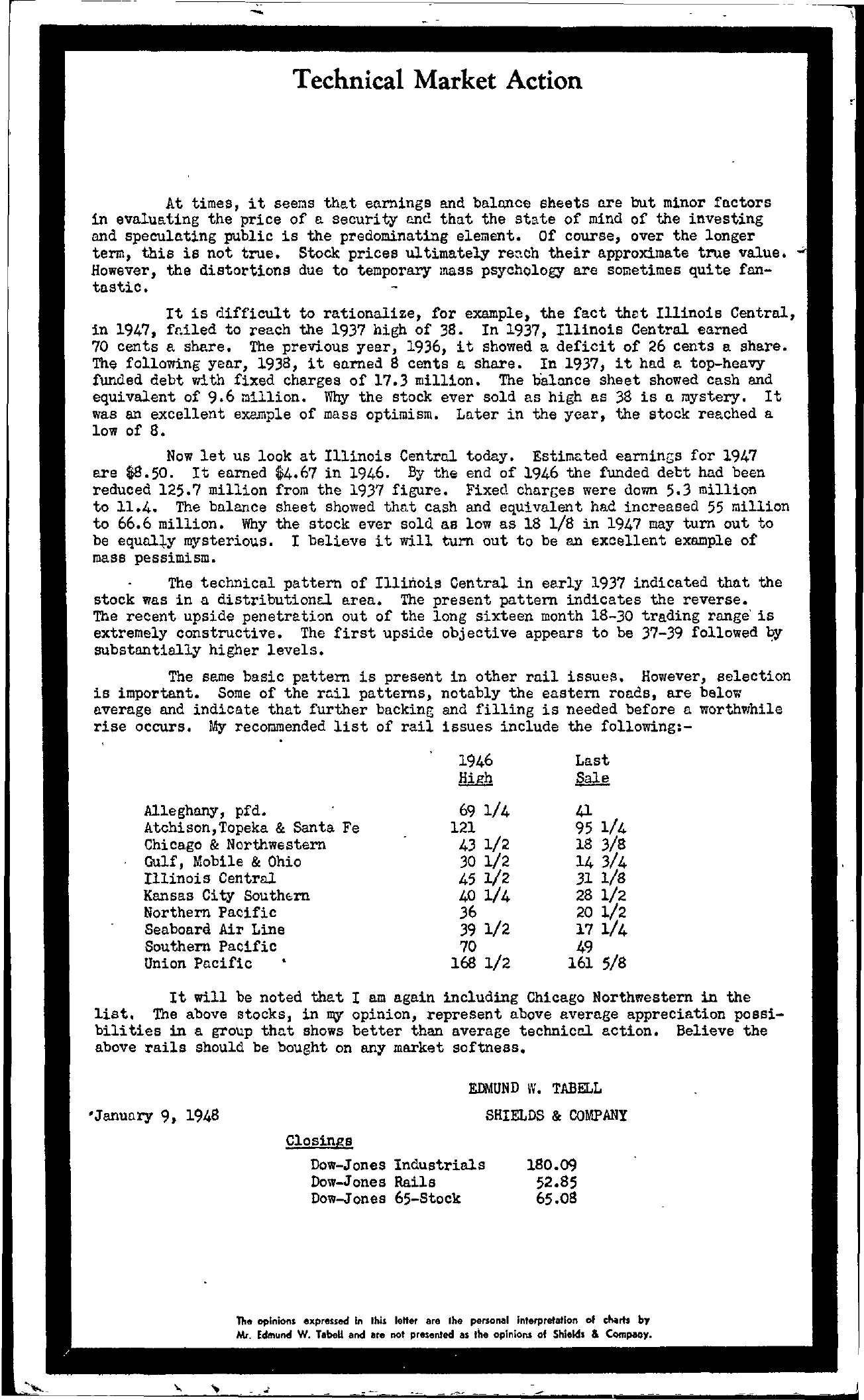 – Technical Market Action At times, it sees that earnings and balance sheets are but minor factors in evaluating the price of a security nne that the state of mind of the investing and speculating public is the predominating element. Of course, over the longer term, this is not true. Stock prices ultimately reach their approximate true value. However, the distortions due to temporary nass psychology are sometimes quite fantastic. It is difficult to rationalize, for example, the fact thDt Illinois Central, in 1947, fniled to reach the 1937 high of 38. In 1937, IllinoiS Central earned 70 cents a shr.re. The previous year, 1936, it showed a deficit of 26 cents a share. The following year, 1938, it earned 8 cents a share. In 1937, it had a top-heavy funded debt with fixed charges of 17.3 million. The balance sheet showed cash and equivalent of 9.6 million. Why the stock ever sold as high as 38 is a mystery. It was an excellent example of mass optimism. Later in the year, the stock reached a low of 8. Now let us look at Illinois Central today. Estimated earnings for 1947 are 8.50. It earned 4.67 in 1946. By the end of 1946 the funded debt had been reduced 125.7 million from the 1937 figure. Fixed charGes were down 5.3 million to 11.4. The balance sheet showed thnt cash and equivalent had increased 55 million to 66.6 million. Why the stock ever sold as low as 18 1/8 in 1947 may turn out to be equallY mysterious. I believe it will turn out to be an excellent example of mass pessimism. The technical pattern of Illinois Central in early 1937 indicated that the stock was in a distributionil area. The present pattern indicates the reverse. The recent upside penetration out of the long sixteen month 18-30 trading range' is extremely constructive. The first upside objective appears to be 37-39 followed b,r substantially higher levels. The same basic pattern is present in other rail issues. However, selection is important. Some of the ruil patterns, notably the eastern roads, are below average and indicate that further backing and filling is needed before a worthwhile rise occurs. My recommended list of rail issues include the following- 1946 High Last Alleghany, pfd. Atchison,Topeka & Santa Fe Chicago & Northwestern Gulf, Mobile & Ohio IllinoiS Central Kansas City Southern Northern PacifiC Seaboard Air Line Southern PacifiC Union Pacific 69 1/4 121 43 1/2 30 1/2 45 1/2 40 1/4 36 39 1/2 70 168 1/2 41 95 1/4 18 3/8 14 3/4 31 l/S 28 1/2 20 1/2 17 1/4 49 161 5/8 It will be noted that I am again including Chicago Northwestern in the list. The above stocks, in my opinion, represent above average appreCiation pOSSibilities in a group that shows better than average technical action. Believe the above rails should be bought on any market softness. 'January 9, 1948 EDMUND IV. TABELL SHIELDS & COMPANY Closings Dow-Jones Industrials Dow-Jones Rails Dow-Jones 65-Stock 180.09 52.85 65.08 The opinions expressed In this lener are Ihe personal Interpretation of ch.rtt by Mr. Edmuncf W. TabeU and ere not preented as the opinions of Shields & CompaOy.