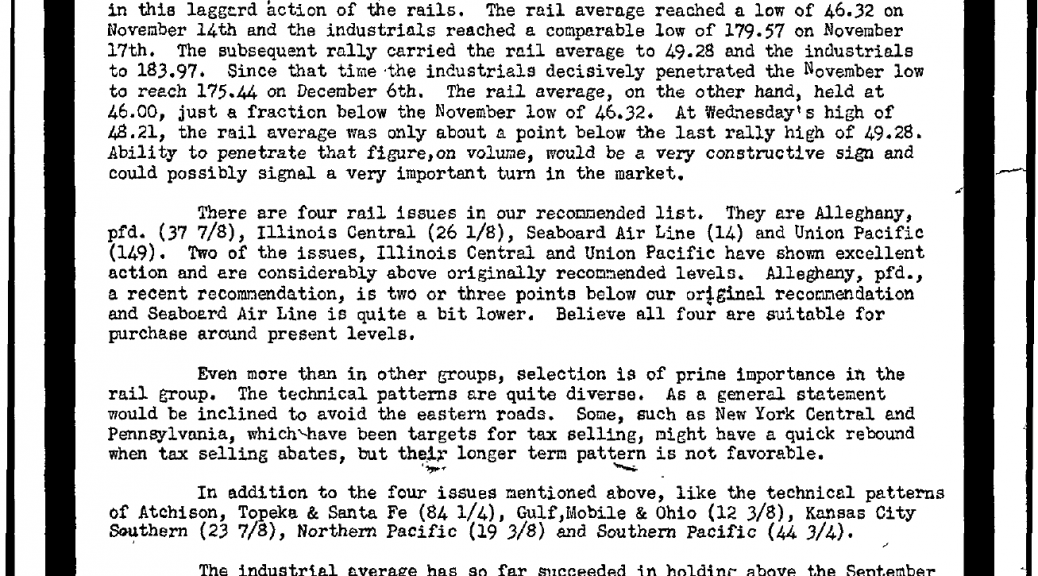 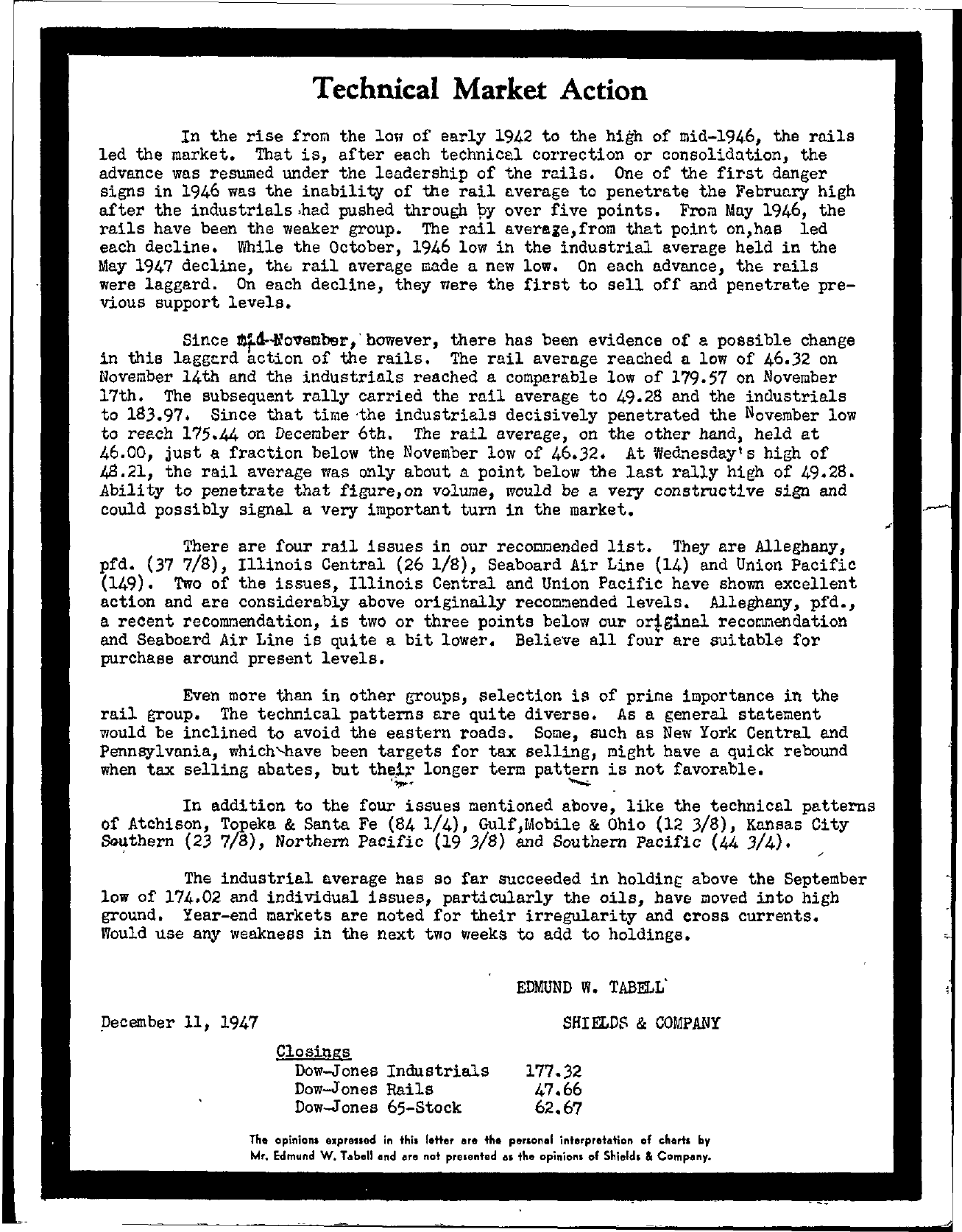 I———————————- Technical Market Action In the rise from the low of early 1942 to the high of mid-1946, the roils led the market. That is, after each technical correction or consolidntion, the advance was resumed under the leadership of the rails. One of the first danger signs in 1946 was the inability of the rail average to penetrate the February high after the industrials ,had pushed through py over five points. From May 1946, the rails have been the weaker group. The rail averaie,from that point on,has led each decline. While the October, 1946 low in the industrial average held in the May 1947 decline, th rail average made a new low. On each advance, the rails were laggard. On each decline, they were the first to sell off and penetrate previous support levels. Since mo8mber,-bowever, there has been evidence of a possible change in this laggcrd action of the rails. The rail average reached a low of 46.32 on November 14th and the industrials reached a comparable low of 179.57 on November 17th. The subsequent rally carried the rail average to 49.28 and the industrials to 183.97. Since that time -the industrials decisively penetrated the November low to reach 175.44 on December 6th. The rail average, on the other hand, held at 46.00, just a fraction below the November low of 46.32. At Weesday's high of 48.21, the rail average was only about a point below the last rally high of 49.28. Ability to penetrate that figure,on volume, would be a very constructive sign and could possibly signal a very important turn in the market. There are four rail issues in our recoonended list. They are Alleghany, pfd. (37 7/8), Illinois Central (261/8), Seaboard Air Line (14) and Union Pacific (149). Two of the issues, Illinois Central and Union PacifiC have shown excellent action and are considerably above originally recomended levels. Alleghany, pfd., a recent recomnendation, is two or three points below our orginal recoonendation and Seaboard Air Line is quite a bit lower. Believe all four are suitable for purchase around present levels. Even more than in other groups, selection is of prie importance in the rail group. The technical patterns are quite diverse. As a general statement would be inclined to avoid the eastern roads. Some, such as New York Central and Penns.ylvania, which'have been targets for tax selling, might have a quick rebound when tax selling abates, but their longer term pattern is not favorable. '…… ……… In addition to the four iSSues mentioned above, like the technical patterns of Atchison, Topeka & Santa Fe (841/4), Gulf,Moblle & Ohio (123/8), Kansas City Southern (23 7/8), Northern Pacific (19 )/B) and Southern Pacific (44 )/4). ,/ The industrial average has so far succeeded in holdin above the September low of 174.02 and indiVidual issues, particularly the Oils, have moved into high ground. Year-end markets are noted for their irregularity and cross currents. Would use any weakness in the next two weeks to add to holdings. EDMUND W. TABELL' December 11, 1947 Closings Dow..Jones Industrials Dow…Jones Rails Dow…Jones 65-Stock SHIELDS & COMPANY 177.32 47.66 62.67 The opinion. expressed in this fetter ere the personal interpretation of cherts by Mr. Edmund W. Tabell and iIIf. not presented os the opinions of Shields & Company.