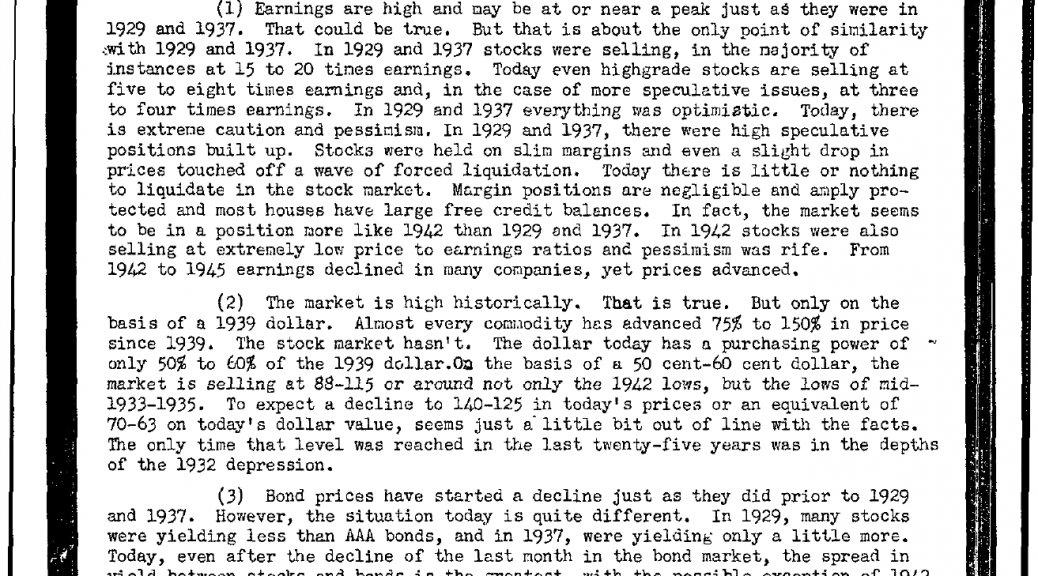 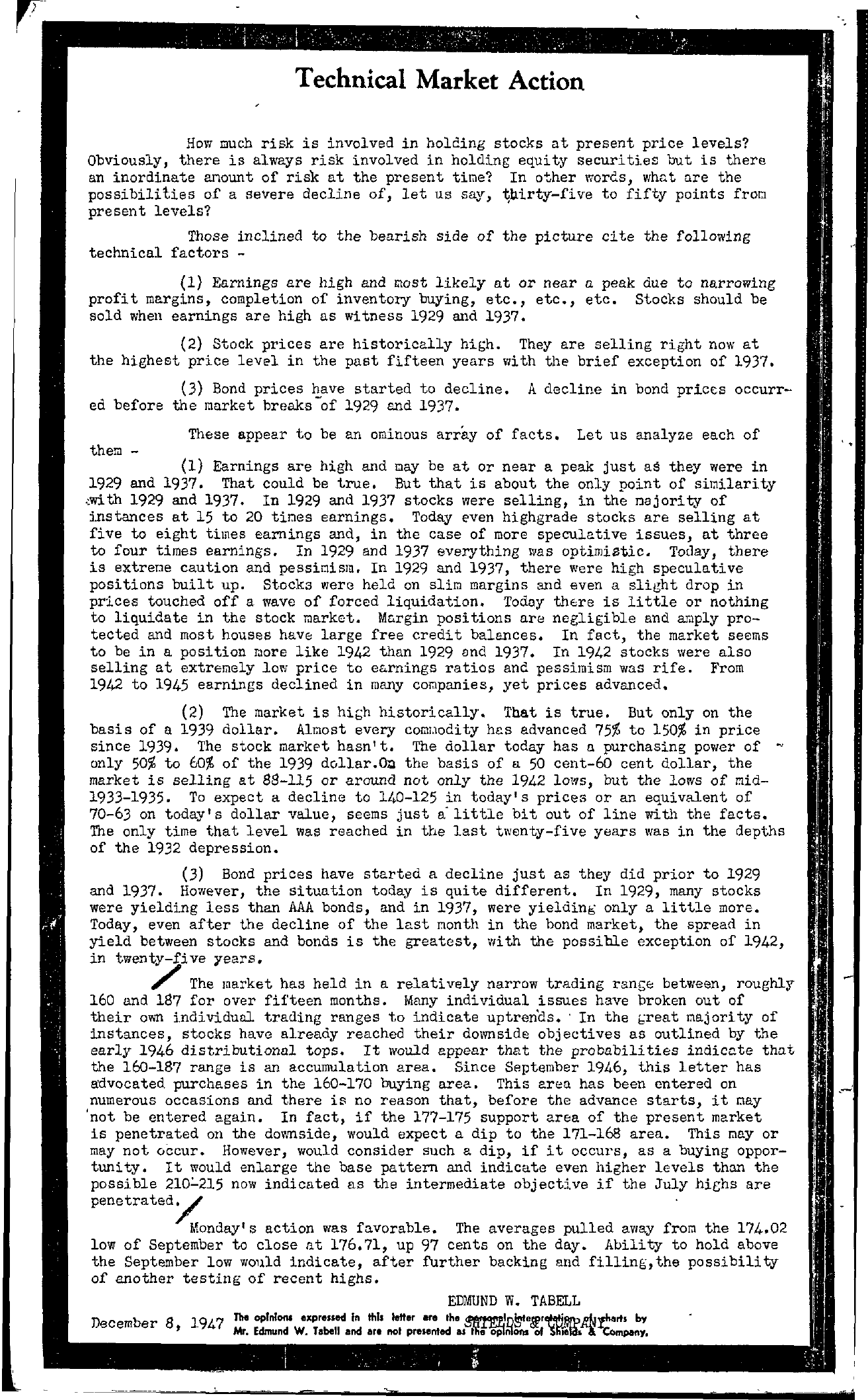 Technical Market Action -. How much risk is involved in holcing stocks at present price levels Obviously, there is always risk involved in holding equity securities but is there an inordinate anount of risk at the present time In other worG.s, what are the possibilities of a severe decline of, let us say, irty-five to fifty points from present levels Those inclined to the bearish side of the picture cite the following technical factors – (1) Earnings are high and most likely at or near 11 peak due to narrowing profit margins, completion of inventory buying, etc., etc., etc. Stocks should be sold when earnings are high as witness 1929 and 1937. (2) Stock prices are historically hibh. They are selling right now at the highest price level in the past fifteen years with the brief exception of 1937. (3) Bond prices have started to decline. A decline in bond prices occurred before the market breaks 'of 1929 and 1937. These appear to be an ominous array of facts. Let us analyze each of them – (1) Earnings are high and may be at or near a peak just as they were in 1929 and 1937. That could be true. But that is about the only point of similarity ,with 1929 and 1937. In 1929 and 1937 stocks Vlere selling, in the najority of jnstances at 15 to 20 times earnings. Today even highgrade stocks are selling at five to eight times earnings and, in the case of more speculative issues, at three to four times earnings. In 1929 and 1937 everything vms optimilltic. Today, there is extreme caution and pessimism. In 1929 and 1937, there Were high speculative positions built up. Stocks were held on slim margins and even a slight drop in prices touched off a wave of forced liquidation. Today th6re is little or nothing to liquidate in the stock market. Mrgin positions are negligible and amply protected and most houses haVE large free credit balances. In fact, the market seems to be in a position more like 1942 than 1929 and 1937. In 191.2 stocks Vlere also selling at extremely low price to earnings ratios and pessimism was rife. From 1942 to 1945 earnings declined in many companies, yet prices advanced. (2) The market is hibh historically. That is true. But only on the basis of a 1939 dollar. Almost every comr,lodity hes advanced 75 to 150 in price since 1939. The stock market hasn't. The dollar today has a purchasing power of N only 50 to 60 of the 1939 dollar.OJ;) the basis of a 50 cent-60 cent dollar, the market is selling at 88-115 or around not only the 1942 lows, but the lows of mid1933-1935. To expect a decline to 140-125 in today's prices or an equivalent of 70-63 on today's dollar value, seems just a'little bit out of line witil the facts. The only time that level was reached in the last twenty-five years was in the depths of the 1932 depression. (3) Bond prices have started a decline just as they did prior to 1929 and 1937. However, the situation today is quite different. In 1929, many stocks were yielding less than AAA bonds, and in 1937, were yieldin only a little more. Today, even after the decline of the last month in the bond market, the spread in yield between stocks and bonds is the greatest, with the possible exception of 1942, in twenty-five years. / The market has held in a relatively narrow trading rangE between, roughly 160 and 187 for over fifteen months. !any individual issues have broken out of their own individunl trading ranges t.o indicate up trenrls . In the breat maj ori ty of instances, stocks have already reached their downside objectives as outlined by the early 1946 distributional tops. It would appear that the probabilities indicte that the 160-187 range is an accumulation area. Since September 1946, this letter has advocated purChases in the 160-170 buying area. This area has been entered on numerous occasions and there is no reason that, before the advance starts, it may 'not be entered again. In fact, if the 177-175 support area of the present market is penetrated on the downSide, would expect a dip to the 171-168 area. This mayor may not occur. However, Vlould consider such a dip, if it occurs, as a buying opportunity. It would enlarge the base pattern and indicate even higher levels than the possible 2l02l5 noVi indicated as the intermediate objective if the July hiehs are penetrated! Monday's action was favorable. The averages pulled away frora the 174.02 low of September to close at 176.71, up 97 cents on the day. Ability to hold above the September 10Vi wlld indicate, after further backing and fillin5,the possibility of another testing of recent highs. EDMUND W. TABELL December 8 1947 The opiniON …r.ed In this leHer er. 'h. ,!flS'.&,rqhjljJ!,\eIJ's by , Mr. Edmund W. label! and are not presented arflie-C)pliilons Of lietal'mp.an1. –