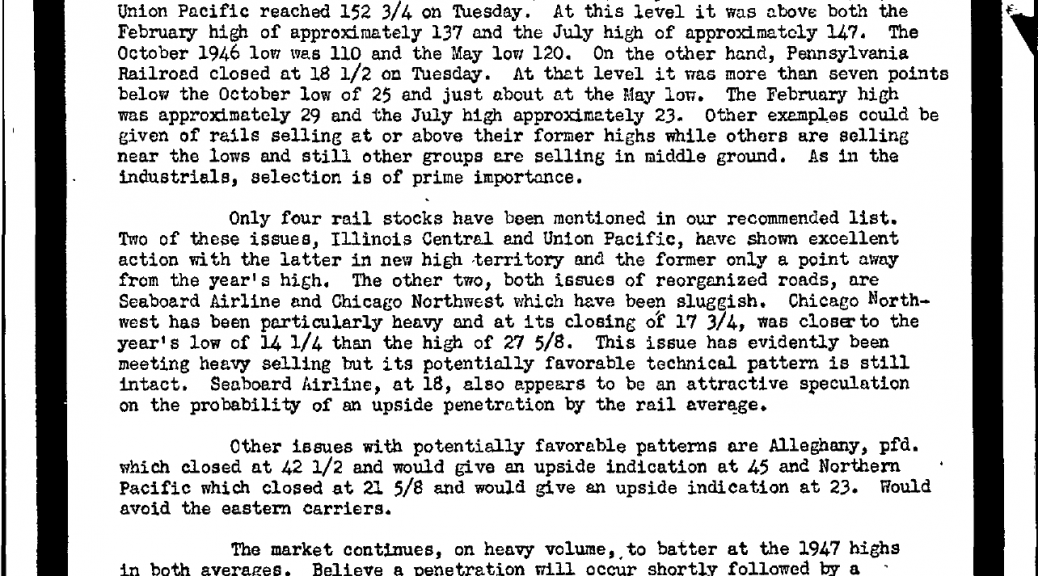 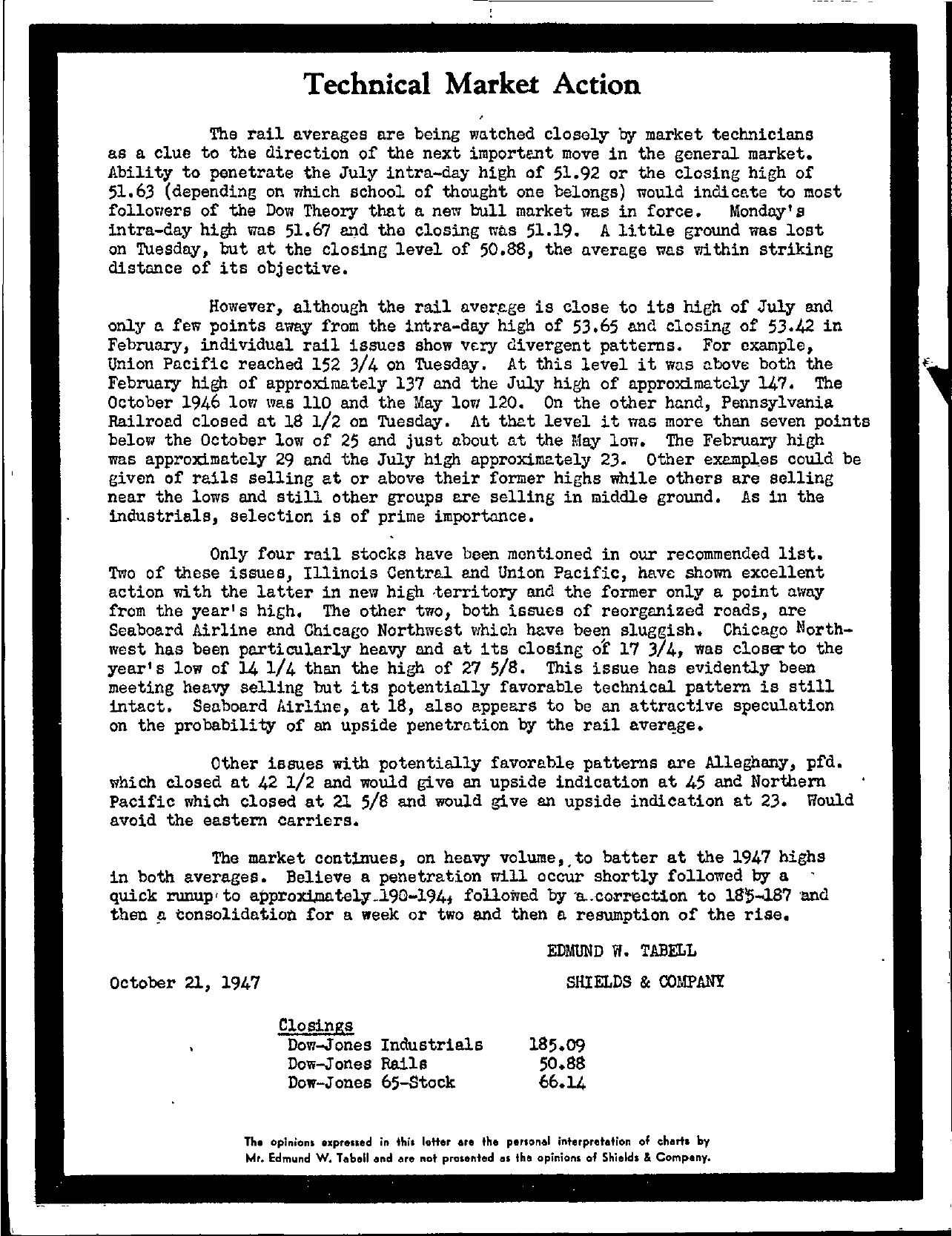 Technical Market Action The rail averages are being watched closely qy market technicians as a clue to the direction of the next importent move in the general market. Ability to penetrate the July intra-day high of 51.92 or the closing high of 51.6.3 (depending on which SChool of thought one belongs) would indicate to most folior/ere of the Dow Theory toot a new bull market was in force. Mondlly's intra-day high ,ms 51.67 and the closing was 51.19. A little ground was lost on Tuesday, but at the closing level of 50.88, the average was within striking distance of its objective. However, although the rail averge is close to its high of July and only a few pOints away from the intra-day high of 5.3.65 and clOSing of 5.3.42 in February, individual rail issues show vry divergent patterns. For example, Union PaCific reached 152 .3/4 on Tuesday. At this level it was above both the February high of approximately 1.37 and the July high of approximately 147. The October 1946 low \Vas 110 and the May loVl 120. On the other hc.nd, Pennsylvania Railroad closed at 18 1/2 00 Tuesday. At that level it was more than seven points below the October low of 25 and just about at the May lon. The February high was approximately 29 and the July high apprOximately 2.3. Other exe.mples could be given of rails selling at or above their former highs While others are selling near the lows and still other groups are selling in middle ground. As in the industrials, selection is of prime importance. Only four rail stocks have been mentioned in our recommended list. Two of these issues, IllinoiS Central and Union PaCific, have Shown excellent action with the latter in new high ,territory and the former only a point away from the year's high. The other two, both issues of reorgenized roads, are Seaboard Airline and Chicago Northw()st which have been sluggish. Chicago Northwest has been particularly heavy and at its closing of 17 .3/4, was closerto the year's low of 14 1/4 than the high of 27 5/8. This issue has evidently been meeting heavy selling but its potentially favorable technical pattern is still intact. Seaboard Airline, at 18, also appears to be an attractive speculation on the probabili of an upside penetration by the rail averge. Other issues with potentially favorable patterns are Alleghany, pfd. which closed at 42 1/2 and would give an upside indication at 45 and Northern Pacific which closed at 21 5/8 and would give an upside indication at 23. Would avoid the eastern carriers. The market continues, on heavy volumeto batter at the 1947 highs in both averages. Believe a penetration will occur shortly followed by a quick runup,to approXimatel1190-l94; followed by 'a,correction to 197 'and then consolidation for a week or two and then a resumption of the rise. october 21, 1947 EDMUND V/. TABELL SHIELDS & COMPANY ClOSings Dow-Jones Industrials Dow-Jones Rails Dow-Jones 65-Stock 185.09 50.88 66.14 Th. op1nions exprelled in this letter are the personal interpretation of charts by Mr. Edmund W. labell and are not presented as the opinions of Shield. & Company.