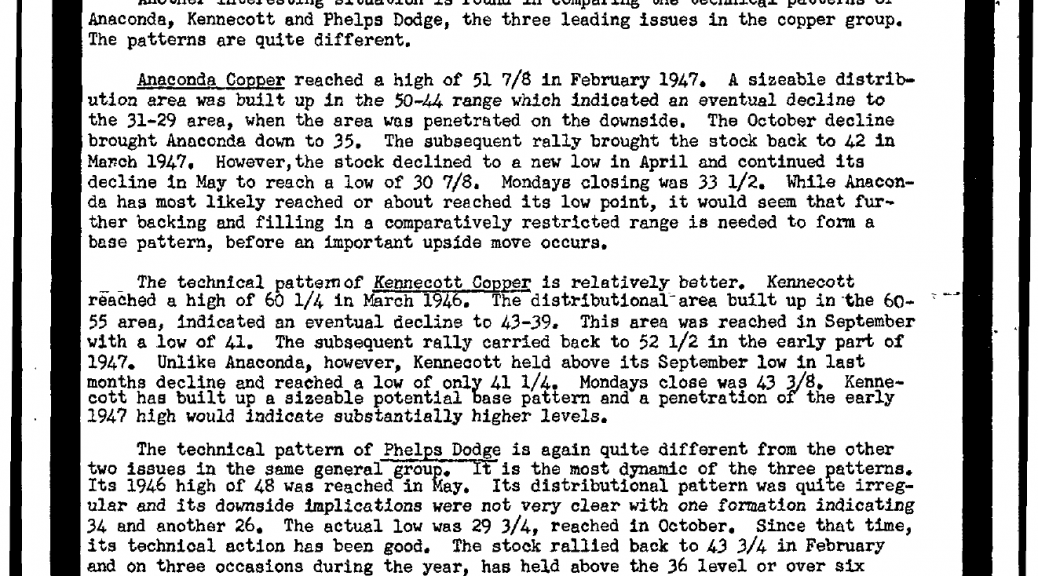 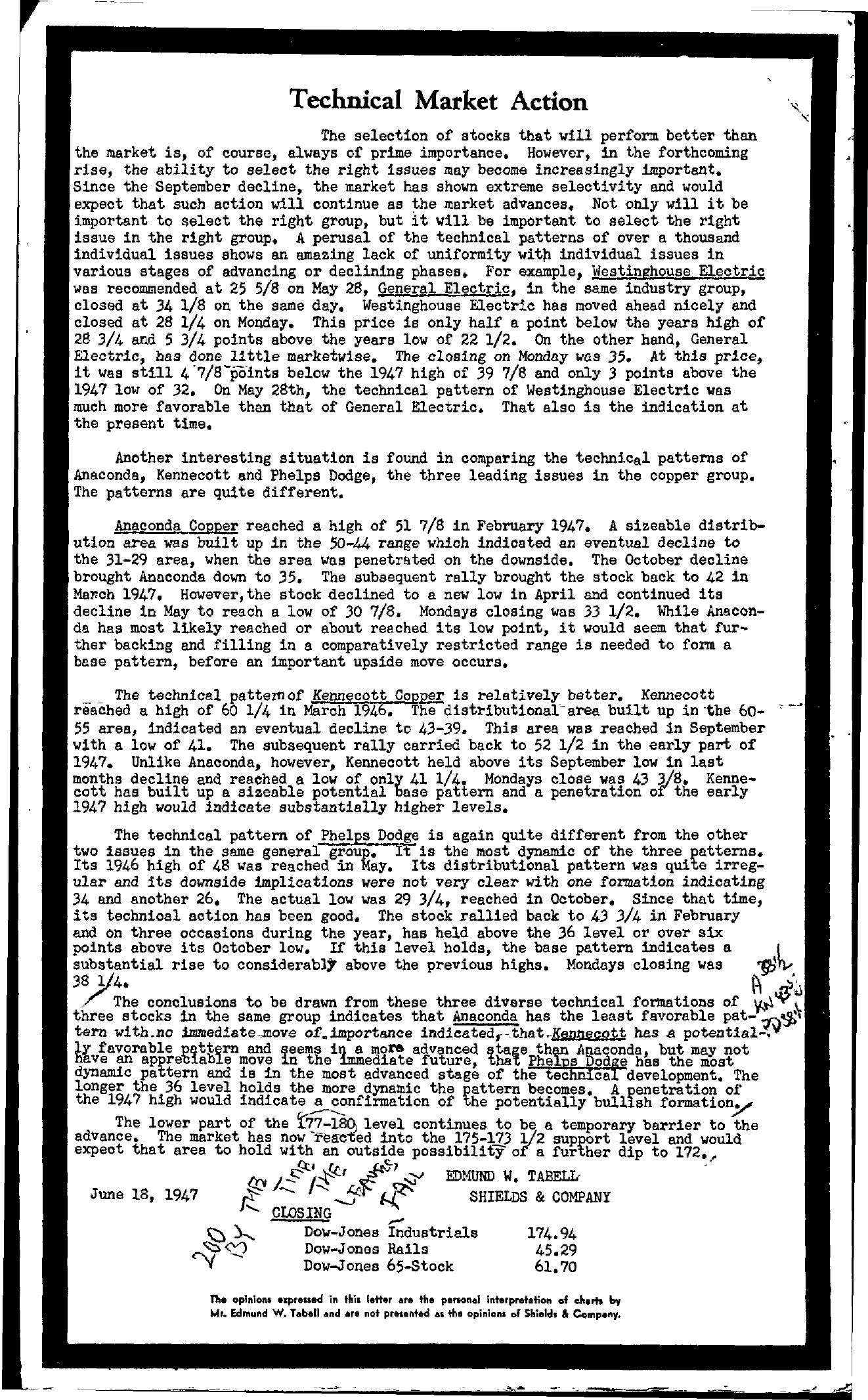 Technical Market Action The selection of stocks that viII perform better than the market is, of course, always of prime importance. However, in the forthcoming rise, the ability to select the right issues may become increasingly important. Since the September decline, the market has shown extreme selectivity and would expect that such action will continue as the market advances. Not only will it be important to select the right group, but it viII be important to select the right issue in the right group. A perusal of the technical patterns of over a thousand individual issues shows an amazing lack of uniformity witp individual issues in various stages of advancing or declining phases. For example, Westinghouse Electri was recommended at 25 5/8 on May 28, General Electric, in the same industry group, closed at 34 1/8 on the seme day. Westinghouse Electric has moved ahead nicely and closed at 28 1/4 on Monday. This price is only half a point below the years high of 28 3/4 and 5 3/4 points above the years low of 22 1/2. On the other hand, General Electric, has done little marketwise. The closing on Monday was 35. At this price, it was still 4 -7/8-polnts below the 1947 high of 39 7/8 and only 3 points above the 1947 low of 32. On May 28th, the technical pattern of Westinghouse Electric was much more favorable than that of General Electric. That also is the indication at the present time. Another interesting situation is found in comparing the techniCal patterns of Anaconda, Kennecott and Phelps Dodge, the three leading issues in the copper group. The patterns are quite different. Anaconda Copper reached a high of 51 7/8 in February 1947. A sizeable distribution area was built up in the 50-44 range which indicated an eventual decline to the 31-29 area, when the area Wes penetrated on the downside. The October decline brought Anaconda down to 35. The subsequent rally brought the stock back to 42 in Manch 1947. However,the stock declined to a new low in April and continued its decline 1n May to reach a low of 30 7/8. Mondays clOSing Was 33 1/2. While Anaconda has most likely reached or about reached its low point, it would seem that further backing and filling in a comparatively restricted range is needed to form a base pattern, before an important upside move occurs. The technical patteIflof Kennecott Copper is relatively better. Kennecott reached a high of 60 1/4 in March 1946. The distributionalarea built up in-the 60- 55 area, indicated an eventual decline to 43-39. This area was reaChed in September with a low of 41. The subsequent rally carried back to 52 1/2 in the early part of 1947. Unlike Anaconda, however, Kennecott held above its September low in last months decline and reached a low of only 41 1/4. Mondays close was 43 3/8. Kenne- orcott has built up a sizeable potential base pattern and a penetration the early 1947 high would indicate substantially higher levels. The technical pattern of Phelps Dodge is again quite different from the other two issues in the same general group. It is the most dynamic of the three patterns. Its 1946 high of 48 was reached in May. Its distributional pattern was quite irregular and its downside implications were not very clear with one formation indicating 34 and another 26. The actual low was 29 3/4, reached in October. Since that time, its technical action has been good. The stock rallied back to 43 3/4 in February and on three occasions during the year, has held above the 36 level or over six points above its October low. If this level holds, the base pattern indicates a I SUbstantial rise to considerabl, above the previous highs. Mondays clOSing was 38. The conclusions to be drawn from these three diverse technical formations of \ three stocks in the same group indicates that Anaconda has the least favorable pat-i tern with.no imlDediats,move ofimportance indicated,–thatcKennecott has potential-. ly favorable pettbern and eem in a mora adVanced stage th Anaconda, but may not have an appreb1a 'Le move in the immediate future, that Phelps DOdfe has the most dynamic pattern and is in the most advanced stsge of the teChnics development. The longer the 36 level holds the more dynamic the pattern becomes. A penetration of the 1947 high would indicate a confirmation of the potentially bullish formation The lower part of the level continues to be a temporary barrier to the advance. The market has now reced into the 175-173 1/2 support level and would expect that area to hold with an outside possibility of a further dip to l72. June 18, 1947 it …. /…. .!Jf.'! J.S9;. -.\'f-.-t F,f.I.J… EDMUND W. TABELL SHIELDS & COMPANY . ….. CLOSING S r-y 1 Dov-Jones Industrials Dow-Jones Rails Dow-Jones 65-stock 174.94 45.29 61.70 n. oplniOftl pralSed in this letter ate the penonel interpretation of charts by ,. Edmund W. labell and are not presented as the opinions of Shield. I Company. – —