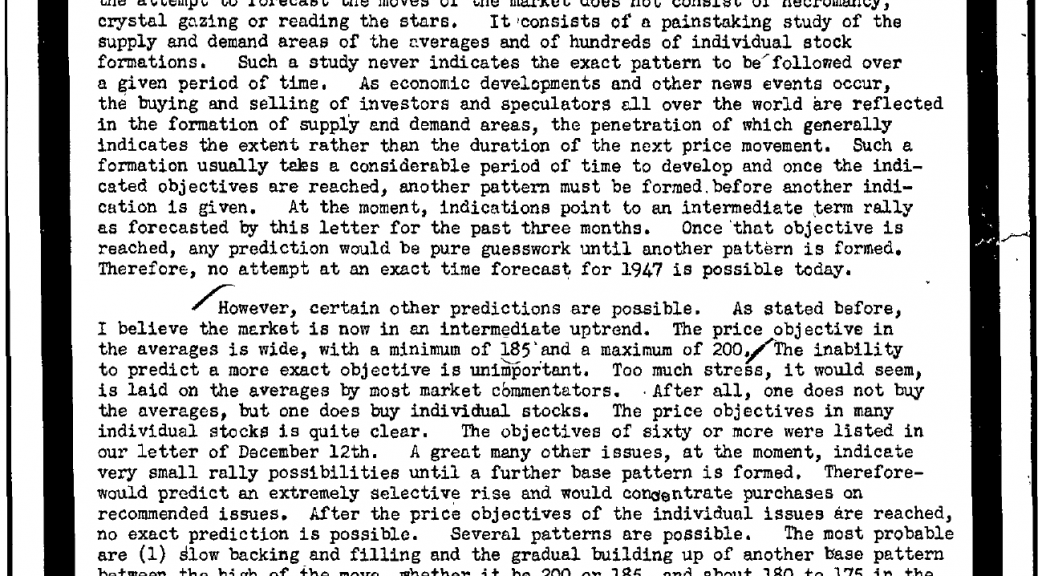 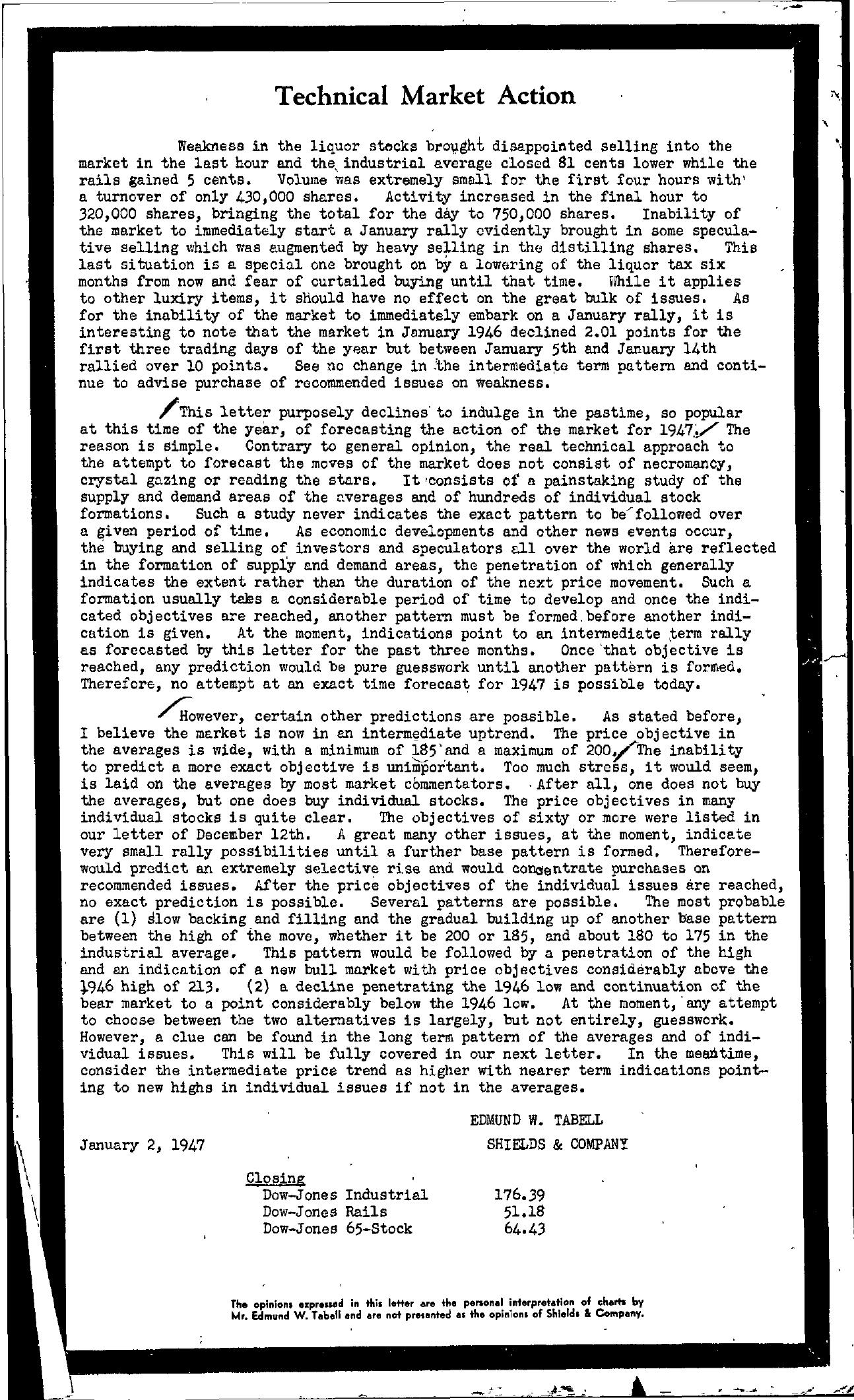 Technical Market Action Weakness in the liquor stocks broght disappointed selling into the market in the last hour and the, industrinl average closed 81 cents lower while the rails gained 5 cents. Volume was extremely small for the first four hours with' a turnover of only 430,000 shares. Activity increased in the final hour to 320,000 shares, bringing the total for the day to 750,000 shares. Inability of the market to immediately start a January rally evidently brought in some speculative selling which was augmented by heavy selling in the distilling shares. This last situation is a special one brought on b.Y a lowering of the liquor tax six months from now and fear of curtailed buying until that time. 'fuile it applies to other luxiry items, it should have no effect on the great bulk of issues. As for the inability of the market to immediately embark on a January rally, it is interesting to note that the market in January 1946 declined 2.01 pOints for the first three trading days of the year but between January 5th and January 14th rallied over 10 points. See no change in the intermediae term pattern and continue to advise purchase of recommended issues on weakness. This letter purposely declines' to indulge in the pastime, so popular at this time of the year, of forecasting the action of the market for 1947,/ The reason is simple. Contrary to general opinion, the real technical approach to the attempt to forecast the moves of the market does not consist of necromancy, crystal gQzing or reading the stars. It 'consists of a painstaking study of the supply and demand areas of the verages and of hundreds of individual stock formations. Such a study never indicates the exact pattern to be/followed over a given period of time. As economic developments and other news events occur, the buying and selling of investors and speculators allover the world are reflected in the formation of supply and demand areas, the penetration of which generally indicates the extent rather than the duration of the next price movement. Such a formation usually tees a considerable period of time to develop and once the indicated objectives are reached, another pattern must be formed,before another indi- cation is given. At the moment, indications point to an intermediate term rally as forecasted by this letter for the past three months. Once 'that objective is reached, any prediction would be pure guesswork until another pattern is formed. Therefore, no attempt at an exact time forecast for 1947 is possible today. owever, certain other predictions are possible. As stated before, I believe the market is now in an intermdiate uptrend. The price objective in the averages is wide, with a minimum of IS5'and a maximum of 200The inability to predict a more exact objective is unimportant. Too much stress, it would seem, is laid on the averages by most market cbmmentators. ,After all, one does not buy the averages, but one does buy individual stocks. The price objectives in many individual stocks is quite clear. The objectives of sixty or more were listed in our letter of December 12th. A great many other issues, at the moment, indicate very small rally possibilities until a further base pattern is formed. Therefore- would predict an extremely selective rise and would cOnGentrate purchases on recommended issues. After the price objectives of the individual issues are reached, no exact prediction is possible. Several patterns are possible. The most probable are (1) slow backing and filling and the gradual building up of another base pattern between the high of the move, whether it be 200 or 185, and about ISO to 175 in the industrial average. This pattern would be followed by a penetration of the high and an indication of a new bull market with price objectives considerably above the 946 high of 213. (2) a decline penetrating the 1946 low and continuation of the bear market to a point considerably below the 1946 low. At the moment, 'any attempt to choose between the two alternatives is largely, but not entirely, guesswork. However, a clue can be found in the long term pattern of the averages and of indiVidual issues. This will be fully covered in our next letter. In the meantime, consider the intermediate price trend as higher with nearer term indications pointing to new highs in individual issues if not in the averages. January 2, 1947 EDMUND W. TABELL SHIELDS & COMPANY Closing Dow-Jones Industrial Dow-Jones Rails Dow-Jones 65-Stock 176.39 51.18 64.43 Th. opinion. elpr.ecl in this letter ere the personal interpretation of cherts by Mr. Edmund W. r.bell end ere not pfMented a. the opinions of Shl.ld, I Company. . –