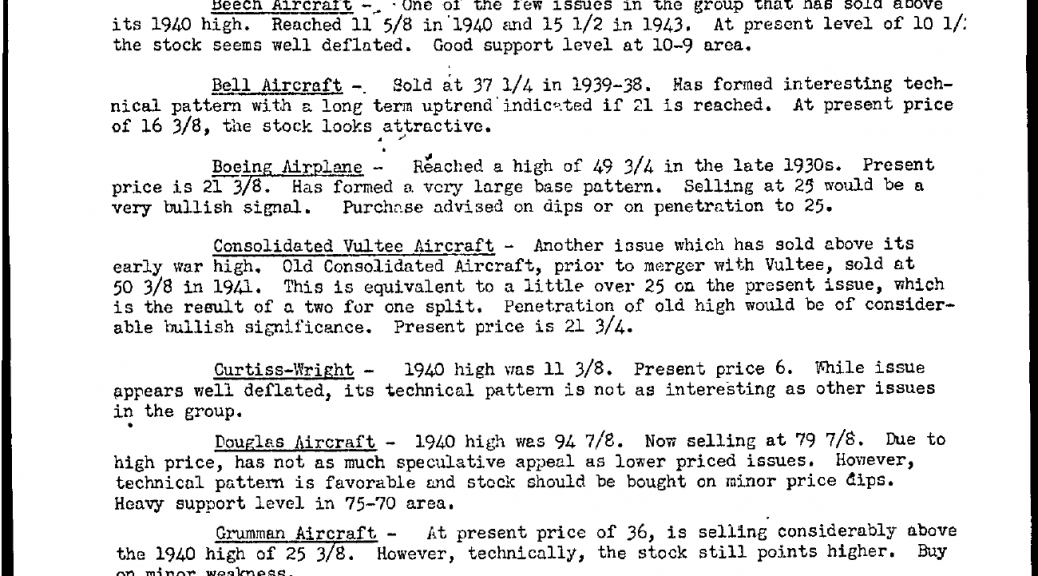 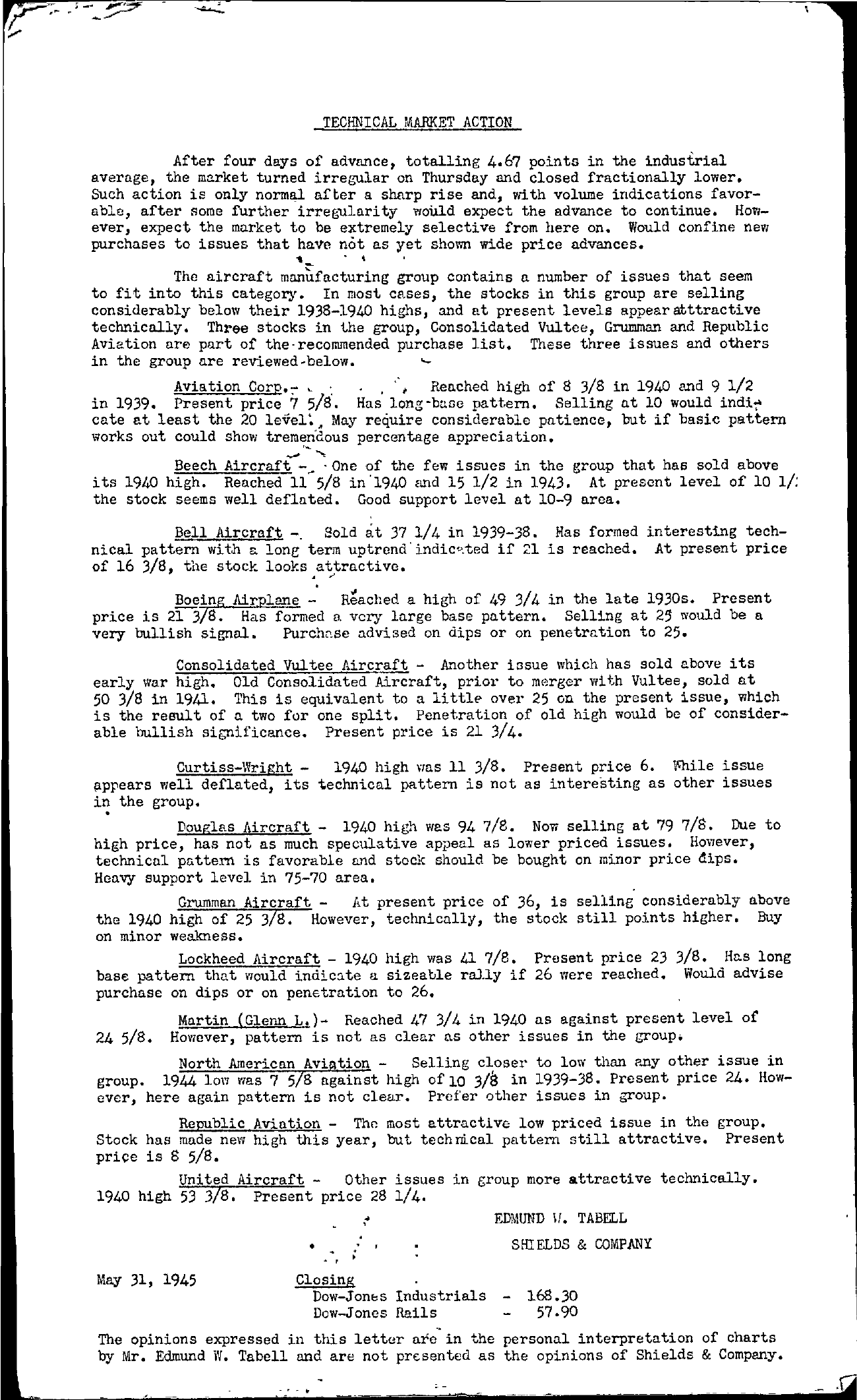 TECHNICAL MARKET ACTION After four days of advance, totalling 4.67 points in the industrial average, the market turned irregular on Thursday and closed fractionally lower. Such action is only normal after a sharp rise and, with volume indications favor- able, after some further irregularity would expect the advance to continue. However, expect the market to be extremely selective from here on. Would confine new purchases to issues that have not as yet shown wide price advances. ' t I The aircraft manufacturing group contains a number of issues that seem to fit into this category. In most cases, the stocks in this group are selling considerably below their 1938-1940 highs, and at present levels appear atttractive technically. Three stocks in the group, Consolidated Vultee, Grumman and Republic Aviation are part of the-recommended purchase list. These three issues and others in the group are reviewed-below. Aviation Corp. c', . , Reached high of 8 3/8 in 1940 and 9 1/2 in 1939. Present price 7 5/8. Has long-bane pattern. Selling at 10 would indicate at least the 20 May require considerable patience, but if basic pattern –works out could show tremendous percentage appreciation Beech Aircraft ….,One of few issues in the group that has sold abo'te its 1940 high. Reached 11 5/8 in '1940 and 15 1/2 in 1943. At present level of 10 1/ the stock seems well deflated. Good support level at 10-9 area. Bell Aircraft – Sold at 37 1/4 in 1939-38. Has formed interesting technical pattern with a long term uptrend' indicated if 21 is reached. At present price .of 16 3/8, the stock looks attractive. Boeing Airplane – a high of 49 3/4 in the late 1930s. Present price is 21 3/8. Has formed a. very lnrge base pattern. Selling at 25 would be a very bullish signal. advised on dips or on penetration to 25. Consolidated Vultee Aircraft – Another issue which has sold above its early war high. Old Consolidated Aircraft, prior to merger with Vultee, sold at 50 3/8 in 1941. This is equivalent to a little over 25 Of the present issue, which is the result of a two for one split. Penetration of old high would be of considerable bullish significance. Present price is 21 3/4. Curtiss-Wright – 1940 high .TaS 11 3/8. Present price 6. \-nile issue llPpears Vlell deflated, its technical pattern is not as interesting as other issues .in the group Douglas Aircraft – 1940 high was 947/8. Now selling at 79 7/. Due to high price, has not as much speculative appeal as lower priced issues. However, technical is favorable und stock should be bought on minor price dips. Heavy support level in 75-70 area. Grumman Aircraft – At present price of 36, is selling considerably above the 1940 high of 25 3/8. However, technically, the stock still points higher. Buy on minor weakness. Lockheed Aircraft – 1940 high was 41 7/8. Present price 23 3/8. Has long base pattern that Vlould a sizeable rru.ly if 26 were reached. Would advise purchase on dips or on penetration to 26. Martin (Glenn L.)- Reached 47 3/4 in 1940 as against present level of 24 5/8. However, pattern is not as clear as other issues in the group; North American Aviation – Selling closer to low than P.ny other issue in group. 1944 1011 ViaS 7 5 '6 against high of 10 3/8 in 1939-38. Present price 24. However, here again pattern is not clear. Prefer other issues in group. Republic Aviation – The most attractive low priced issue in the group. Stock has made new high this year, but technical pattern still attractive. Present price is 8 5/8. United Aircraft – Other issues in group more attractive technically. 1940 high 53 3/8. Present price 28 1/4. , EDMUND W. TABELL . . SHIELDS & COMP/INY May 31, 1945 Closing DOW-Jones Industrials – 168.30 The expressed in this letter in the personal interpretation of charts by Mr. Edmund W. Tabell and are not as the opinions of Shields & Company.