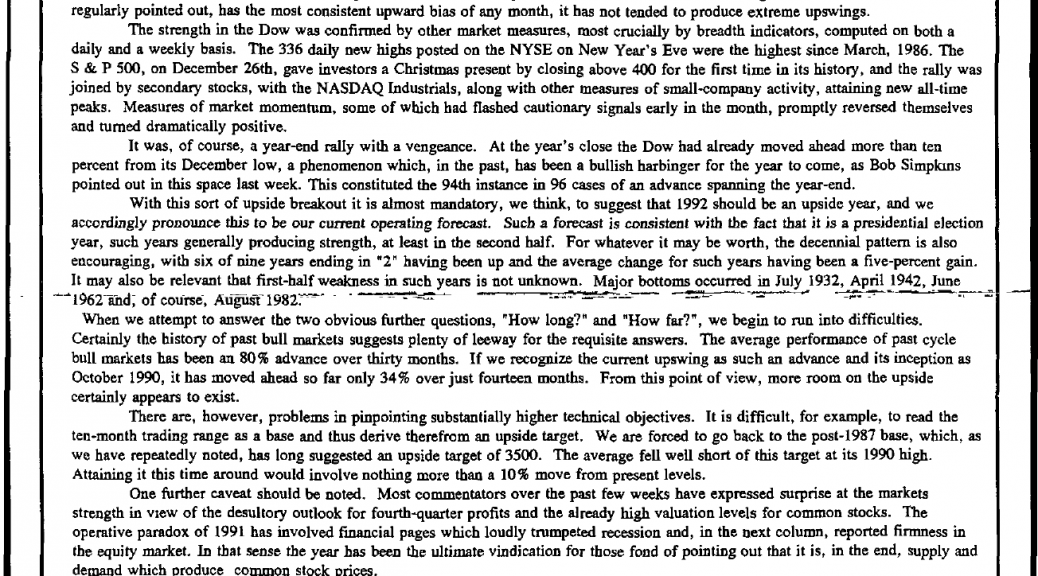 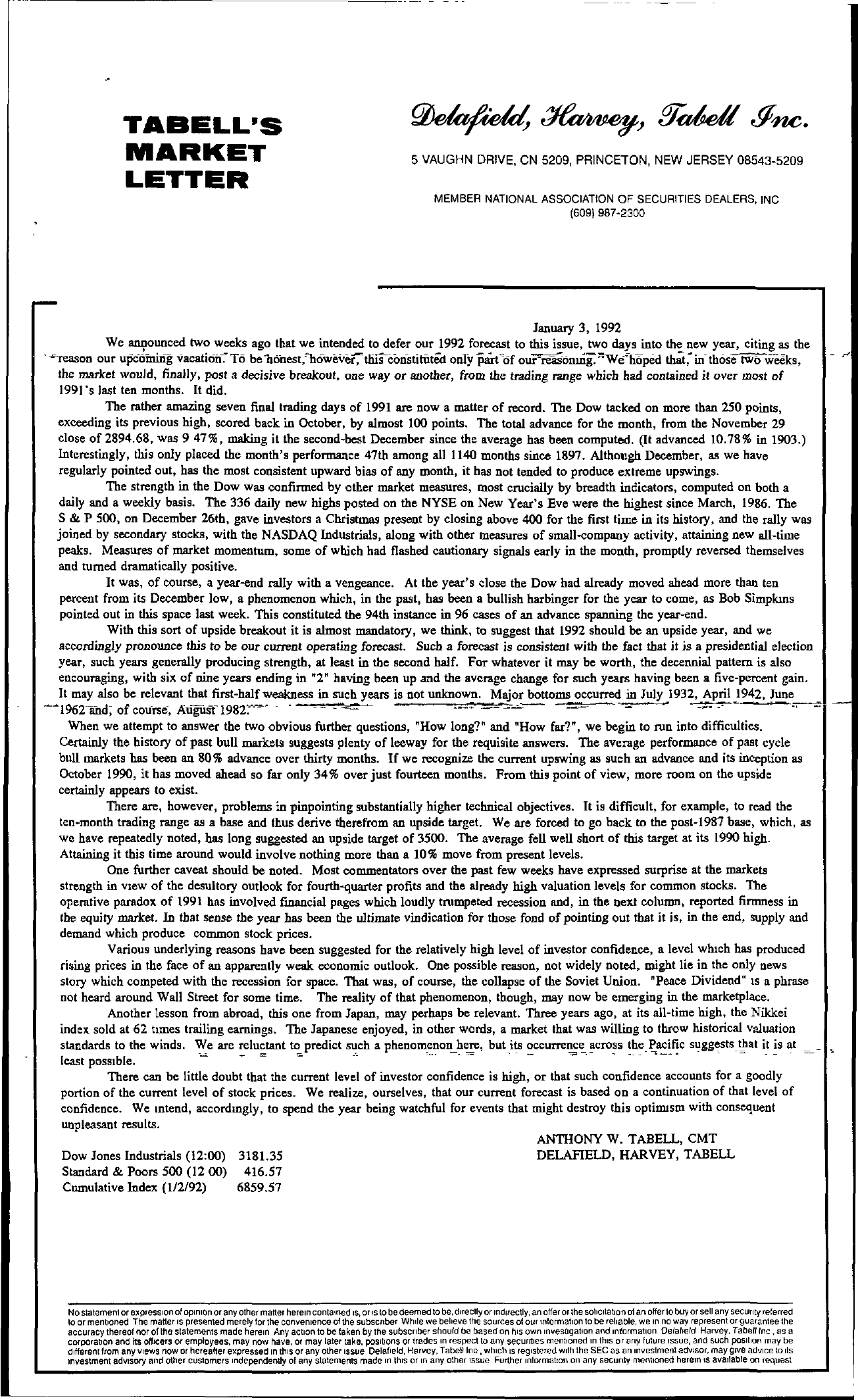 TABELL'S MARKET LETTER 5 VAUGHN DRIVE. CN 5209, PRINCETON. NEW JERSEY 08543-5209 MEMBER NATIONAL ASSOCIATION OF SECURITIES DEALERS. INC (609) 987-2300 January 3, 1992 We announced two weeks ago that we intended to defer our 1992 forecast to this issue, two days into the new year, citing as the reason our upcoming vacation. To be honest, however, this constituted only part o our reasoning. We hoped that, in those two weeks, the market would, finally, post a decisive breakout, one way or another, from the trading range which had contained it over most of 199s last ten months. It did. The rather amazing seven final trading days of 1991 are now a matter of record. The Dow tacked on more than 250 points, exceeding its previous high, scored back in October, by almost 100 points. The total advance for the month, from the November 29 close of 2894.68, was 9 47, making it the second-best December since the average bas been computed. (It advanced 10.78 in 1903.) Interestingly, this only placed the month's performance 47th among all 1140 months since 1897. Although December, as we have regularly pointed out, has the most consistent upward bias of any month, it has not tended to produce extreme upswings. The strength in the Dow was confirmed by other market measures, most crucially by breadth indicators, computed on both a daily and a weekly basis. The 336 daily new highs posted on the NYSE on New Year's Eve were the highest since March, 1986. The S & P 500, on December 26th, gave investors a Christmas present by closing above 400 for the first time in its history, and the rally was joined by secondary stocks, with the NASDAQ Industrials, along with other measures of smaIl-company activity, attaining new all-time peaks. Measures of market momentum, some of which bad flashed cautionary signals early in the month, promptly reversed themselves and turned dramatically positive. It was, of course, a year-end rally with a vengeance. At the year's close the Dow bad already moved ahead more than ten percent from its December low, a phenomenon which, in the past, has been a bullish harbinger for the year to come, as Bob Simplans pointed out in this space last week. This constituted the 94th instance in 96 cases of an advance spanning the year-end. With this sort of upside breakout it is almost mandatory, we think, to suggest that 1992 should be an upside year, and we accordingly pronounce this to be our current operating forecast. Such a forecast is consistent with the fact that it js a presidential election year, such years generally producing strength, at least in the second half. For whatever it may be worth, the decennial pattern is also encouraging, with six of nine years ending in 2 having been up and the average change for such years having been a five-percent gain. It may also be relevant that first-half weakness in such years is not unknown. Major bottoms occurred in July 1932, April 1942, June –1962 and of course August 1982 . When we attempt to answer the two obvious further questions, How long and How far, we begin to run into difficulties. Certainly the history of past bull markets suggests plenty of leeway for the requisite answers. The average performance of past cycle bull markets has been an 80 advance over thirty months. If we recognize the current upswing as such ao advance and its inception as October 1990, it has moved ahead so far only 34 over just fourteen month. From this point of view, more room on the upside certainly appears to exist. There are, however, problems in pinpointing substantially higher technical objectives. It is difficult, for example, to read the ten-month trading range as a base and thus derive there from an upside target. We are forced to go back to the post-1987 base, which, as we have repeatedly noted, has long suggested an upside target of 3500. The average fell well short of this target at its 1990 high. Attaining it this time around would involve nothing more than a 10 move from present levels. One further caveat should be noted. Most commentators over the past few weeks have expressed surprise at the markets strength in view of the desultory outlook for fourth-quarter profits and the already high valuation levels for common stocks. The operative paradox of 1991 has involved financial pages which loudly trumpeted recession and, in the next column, reported firmness in the equity market. In that sense the year has been the ultimate vindication for those fond of pointing out that it is, in the end, supply and demand which produce common stock prices. Various underlying reasons have been suggested for the relatively high level of investor confidence, a level which has produced rising prices in the face of an apparently weak. economic outlook. One possible reason, not widely noted, might lie in the only news story which competed with the recession for space. That was, of course, the collapse of the Soviet Union. Peace Dividend IS a phrase not heard around Wall Street for some time. The reality of that phenomenon, though, may now be emerging in the marketplace. Another lesson from abroad. this one from Japan, may perhaps be relevant. Three years ago, at its all-time high, the Nikkei index sold at 62 limes trailing earnings. The Japanese enjoyed, in other words, a market that was willing to throw historical valuation standards to the winds. We are reluctant to predict such a phenomenon here, but its occurrence across the Pacific suggest it is at least possible. There can be little doubt that the current level of investor confidence is high, or that such confidence accounts for a goodly portion of the current level of stock prices. We realize, ourselves, that our current forecast is based on a continuation of that level of confidence. We intend, accordingly, to spend the year being watchful for events that might destroy this optimism with consequent unpleasant results. ANTHONY W. TABELL, CMT