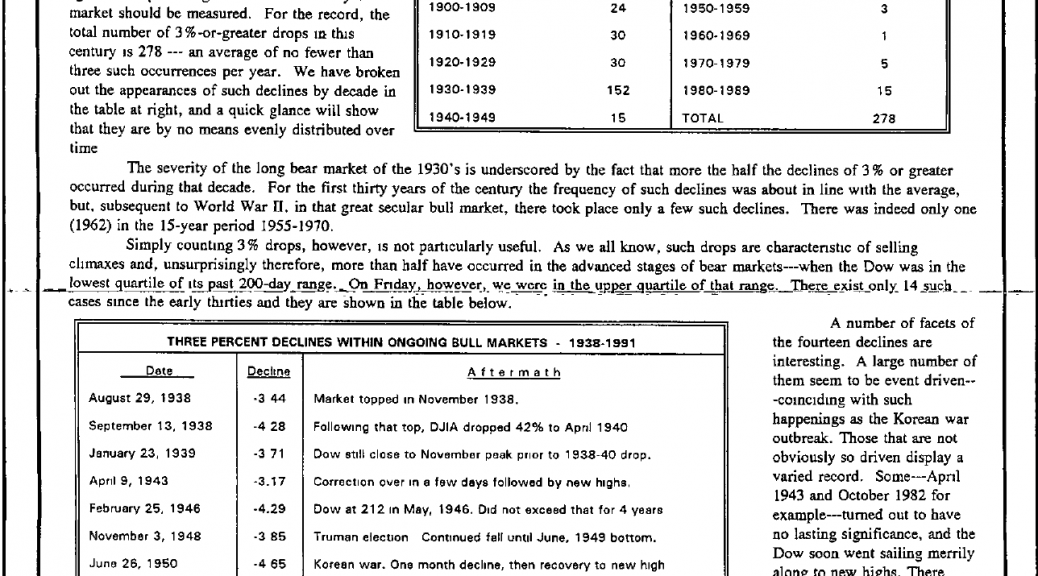 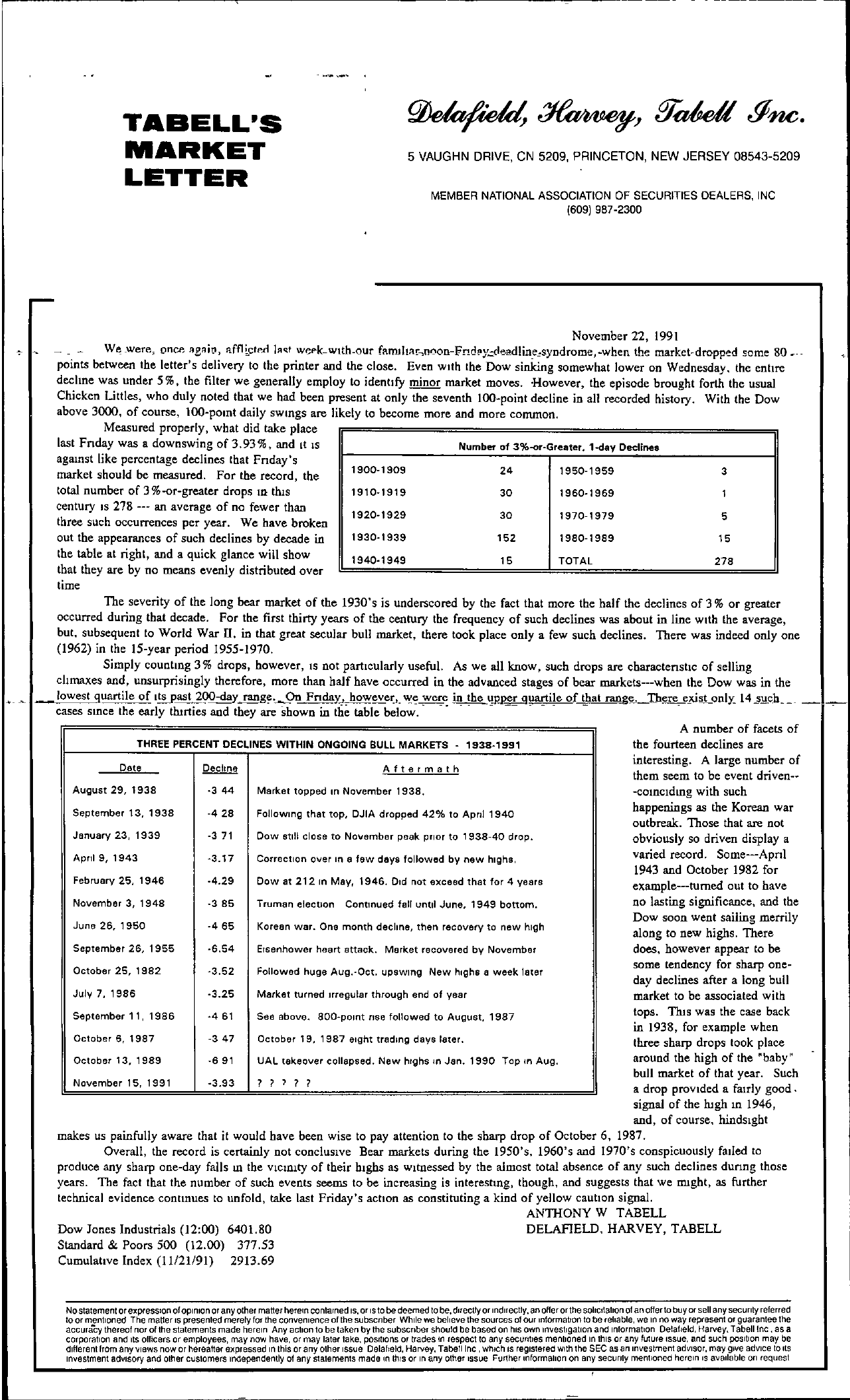 TABELL'S MARKET LETTER —————– 5 VAUGHN DRIVE, CN 5209, PRINCETON, NEW JERSEY 08543-5209 MEMBER NATIONAL ASSOCIATION OF SECURITIES DEALERS. INC (609) 987-2300 November 22, 1991 7 We.were, onre lJglJi1J, tfflLctp.fl lt wepkwlthour fanuhl,r–onoon-fnd;a).cIdlinesyndrome,when the market-dropped some 80 r points between the letter's delivery to the printer and the close. Even with the Dow sinking somewhat lower on Wednesday. the entire declIne was under 5, the filter we generally employ to identify minor market moves. However. the episode brought forth the usual Chicken Littles, who duly noted that we had been present at only the seventh lOO-point decline in all recorded history. With the Dow above 3000, of course, 1oo-pomt daily swmgs are likely to become more and more common. Measured properly, what did take place last Fnday was a downswing of 3.93, and It IS agamst like percentage declines that Fnday's market should be measured. For tbe record, the 19001909 Number of 3-or-Greater. 1-day DecUnee 24 19501959 3 total number of 3 -or-greater drops 10 thIS century IS 278 — an average of no fewer than three such occurrences per year. We have broken 1910-1919 19201929 30 19601969 30 19701979 1 5 out tbe appearances of such declines by decade in 19301939 152 19801989 15 the table at right, and a quick glance will show that they are by no means evenly distributed over 19401949 15 TOTAL 278 time The severity of the long bear market of the 1930's is underscored by the fact that more the half the declines of 3 or greater occurred during that decade. For the first thirty years of the century the frequency of such declines was about in line with the average, n.but, subsequent to World War in that great secular buH market, there took place only a few such declines. There was indeed only one (1962) in the IS-year period 1955-1970. Simply countmg 3 drops, however, IS not partIcularly useful. As we all know, such drops are cbaractenshc of selling clImaxes and, unsurprisingly therefore, more than half have occurred in the advanced stages of bear markets—when the Dow was in the lowest quartile of 1East 2-day rang,—-On Fnday. howevet V!C were in the l!P'p'er guartile of that rangThere ecionly- 14 li!'c.h cases smce the early thuties and they are shown in tlie table below – – – – – – — – THREE PERCENT DECLINES WITHIN ONGOING BULL MARKETS – 1938-1991 Date Dechne Aftermath August 29, 1938 344 Market topped In November 1938. A number of facets of the fourteen declines are interesting A large number of them seem to be event driven–comcIdmg with such September 13, 1938 428 FollOWing that top, DJIA dropped 42 to April 1940 happenings as the Korean war outbreak Those that are not January 23, 1939 371 Dow stili close to November peak prior to 1938-40 drop. obviously so driven display a April 9, 1943 February 25, 1946 -3.17 -4.29 Correct!on over !n a few days followed by new highs. Dow at 212 In May, 1946. Did not exceed that for 4 years varied record. Some—Apnl 1943 and October 1982 for example–tumed out to have November 3, 1948 June 26, 1950 385 465 Truman election Continued fall until June, 1949 bottom. Korean war One month decline, then recovery to new high no lasting significance, and the Dow soon went sailing merrily along to new highs. There September 26, 1955 6.54 Eisenhower heart attack. Market recovered by November does. however appear to be October 25, 1982 3.52 Followed huge Aug.-Oct. upswing New highs a week later some tendency for sharp oneday declines after a long bull July 7,1986 3.25 Market turned Irregular through end of year market to be associated with September 11, 1986 October 6, 1987 461 347 See above. aOO-polnt flse followed to August, 1987 October 19,1987 e!ght trading days later. tops ThIs was the case back in 1938, for example when three sharp drops took place October 13, 1989 November 15, 1991 -691 -3.93 UAL takeover collapsed. New highs m Jan. 1990 Top m Aug. , around the high of the baby bull market of that year. Such a drop proVided a fauly good. signal of the !ugh In 1946, and, of course, hindSight makes us painfully aware that it would have been wise to pay attention to the sharp drop of October 6, 1987. Overall, the record is certainly not conclUSive Bear markets during the 1950's, 1960's and 1970's conspicuously failed to produce any sharp one-day falls lD the VIClDlty of their hIghs as witnessed by the almost total absence of any such declines dunng those years The fact that the number of such events seems to be increasing is interestmg, though. and suggests that we nught, as further technical evidence contmues to unfold, take last Friday's action as constituting a kind of yellow cautton signal. ANlHONY W TABELL Dow Jones Industrials (1200) 6401.80 Standard & Poors 500 (12.00) 377.53 Cumulative Index (11/21191) 2913.69 DELAFIELD. HARVEY, TABELL Nostatemenl or expressIon of opInion or any other matter here!n contaIned !s. or IS to be deemed to be. directly or indirectly. an offeror the sollcltalton of an offer to buy or sell any secunly referred to or mentIoned The matter IS presented merely for the convenience of the subscnber Wh!le we beheve the sources of our Informatton to be rehable. we In no way represent or guarantee the accuracy thereof nor of the statements made herein Any actIon to be taken by the subscnber should be based on hIS own !nvestlgatlon and !nformatlon DelafIeld. Harvey. Tabell Inc , as a corporatIon and !Is officers or employees, may now have. or may later take. posll!Ons Of trades In respect to any secuntles mentioned In th!s or any future Issue, and such position may be d!fferent from anyv!ews now or hereafter expressed In this or any other Issue Oelalleld, Harvey. Tabellinc. whIch IS reg!stered With the SEC as an Investment adVisor. may give adv!ce to Its Investment adVISOry and other customers !ndependently of any statements made In thiS or !n any other Issue Further information on any security mentioned herein IS available on request