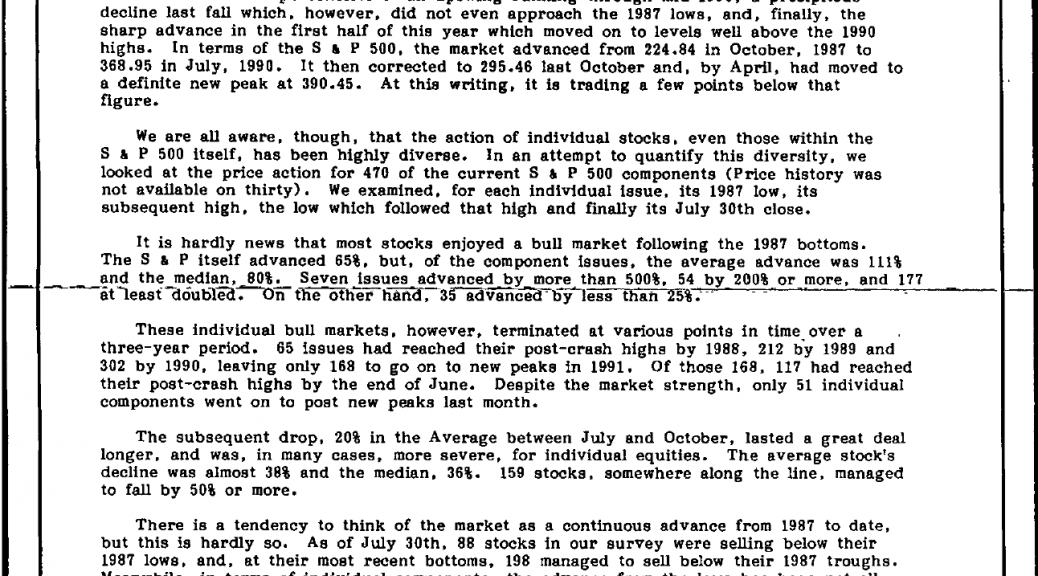 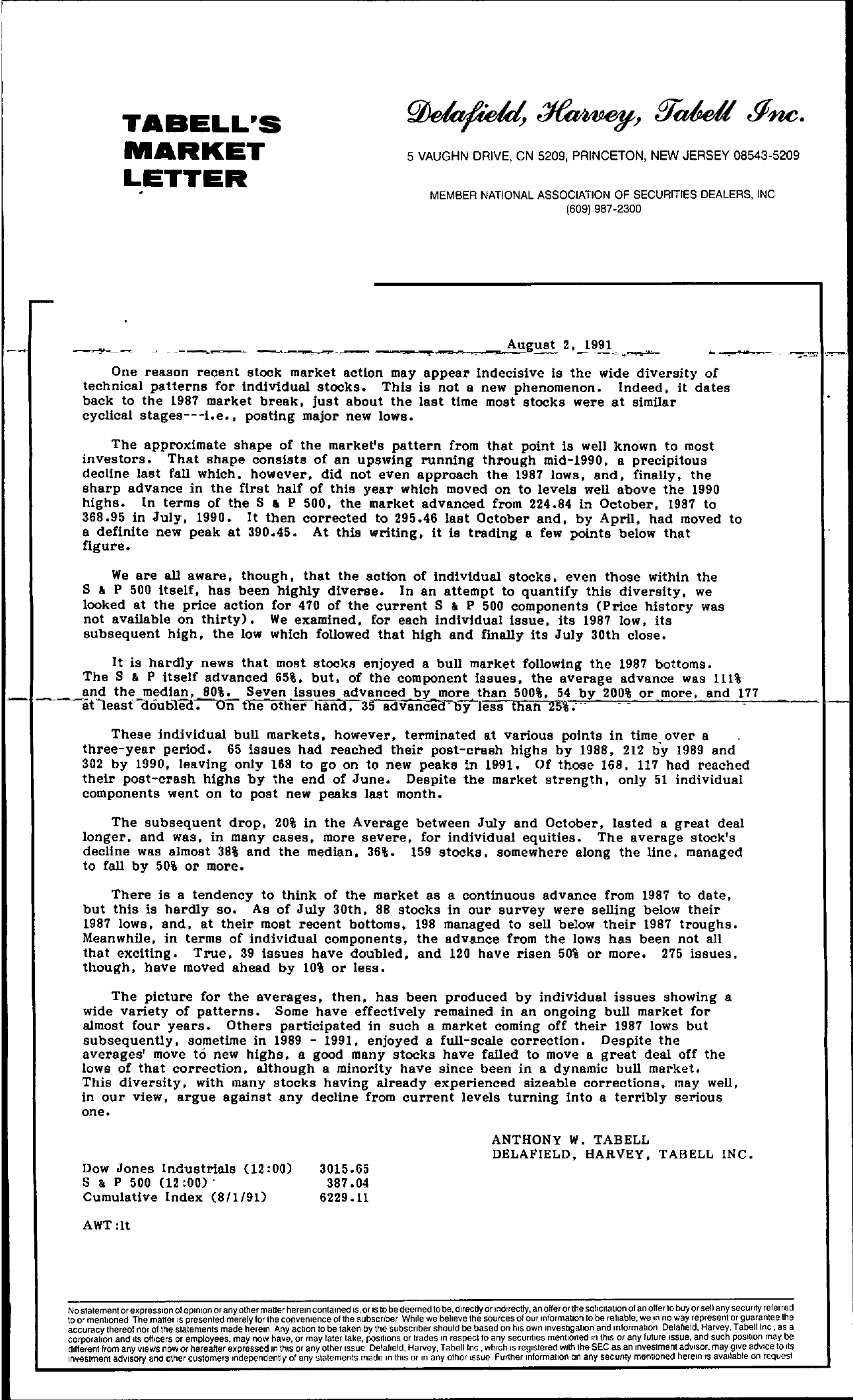 TABELL-S MARKET LETTER 5 VAUGHN DRIVE, CN 5209, PRINCETON, NEW JERSEY 08543-5209 MEMBER NATIONAL ASSOCIATION OF SECURITIES DEALERS, INC (609) 987-2300 — One reason recent stock market action may appear Indecisive Is the wide diversity of technical patterns for Individual stocks. This is not a new phenomenon. Indeed. it dates back to the 1987 market break. just about the last time most stocks were at similar cyclical stages—i.e posting major new lows. The approximate shape of the market's pattern from that point is well known to most investors. That shape consists of an upswing running through mid-1990. a precipitous decline last fall which. however. did not even approach the 1987 lows. and. finally. the sharp advance in the first half of this year which moved on to levels well above the 1990 highs. In terms of the S P 500. the market advanced from 224.84 in October. 1987 to 368.95 in July. 1990. It then corrected to 295.46 last October and. by April. had moved to a definite new peak at 390.45. At this writing. it is trading a few points below that figure. We are all aware. though. that the action of individual stocks. even those within the S P 500 itself. has been highly diverse. In an attempt to quantify this diversity. we looked at the price action for 470 of the current S P 500 components (Price history was not available on thirty). We examined. for each individual issue. its 1987 low. its subsequent high. the low which followed that high and finally its July 30th close. It is hardly news that most stocks enjoyed a bull market following the 1987 bottoms. The S P itself advanced 65. but. of the component issues. the average advance was 111 and the median. 80. Seven issues advanced by more than 500, 54 by 200 or more, and 177 -atleasCaoutilea–Onfhe other hand, 35 advanced-OY-less than 25.- — These individual bull markets. however. terminsted at various points in time over a three-year period. 65 issues had reached their post-crash highs by 1988. 212 b-y 1989 and 302 by 1990. leaving only 168 to go on to new peaks in 1991. Of those 168, 117 had reached their post-crash highs by the end of June. Despite the market strength. only 51 individual components went on to post new peaks last month. The SUbsequent drop. 20 in the Average between July and October. lasted a great deal longer. and was, in many cases, more severe, for individual equities. The average stock's decline was almost 38 and the median. 36. 159 stocks. somewhere along the line. managed to fall by 50 or more. There is a tendency to think of the market as a continuous advance from 1987 to date. but this Is hardly so. As of July 30th. 88 stocks in our survey were selling below their 1987 lows. and. at their most recent bottoms. 198 managed to seli below their 1987 troughs. Meanwhile. in terms of individual components. the advance from the lows has been not all that exciting. True. 39 issues have doubled. and 120 have risen 50 or more. 275 issues. though. have moved ahead by 10 or less. The picture for the averages. then. has been produced by individual issues showing a wide variety of patterns. Some have effectively remained in an ongoing bull market for almost four years. Others participated in such a market coming off their 1987 lows but subsequently. sometime in 1989 – 1991. enjoyed a full-scale correction. Despite the averages' move t6 new highs. a good many stocks have falled to move a great deal off the lows of that correction. although a minority have since been in a dynamic bull market. This diversity. with many stocks having already experienced sizeable corrections. may well. in our view. argue against any decline from current levels turning Into a terribly serious one. Dow Jones Industrials (12 00) S & P 500 (12 00) . Cumulative Index (8/1/90 3015.65 387.04 6229.11 ANTHONY W. TAB ELL DELAFIELD. HARVEY. TABELL INC. AWTlt No statement or expression of opl010n or any other matter herein contained IS, or IS to be deemed to be, directly Of IndIrectly, an offer or the sollcltallon of an offer 10 buy or sen any security referred to or mentioned The matter IS presented merely for the convenience ollhe subSCriber While we believe the sources of our Information to be reliable, we m no way represent or guarantee the accuracy thereof nor of the statements made herein Any action to be taken by the subSCriber should be based on hiS own Investigation and mJQrmallon Delafield, Harvey, Tabelllnc, as a corporation and lis ofhcers or employees, may now have, or may later take, poSitions or trades In respect to any securrtles mentioned m thiS or any luture Issue, and such pOSition may be dllferent from any views now or hereafter expressed In thiS or any other Issue Delaheld, Harvey, Tabell Inc, which IS registered wrth the SEC as an mvestment adVisor, may give adVice to ItS Investment adVISory and other customers Independently of any statements made In thiS or m any other Issue Further InformaliOn on any securrty mentioned herem IS available on request