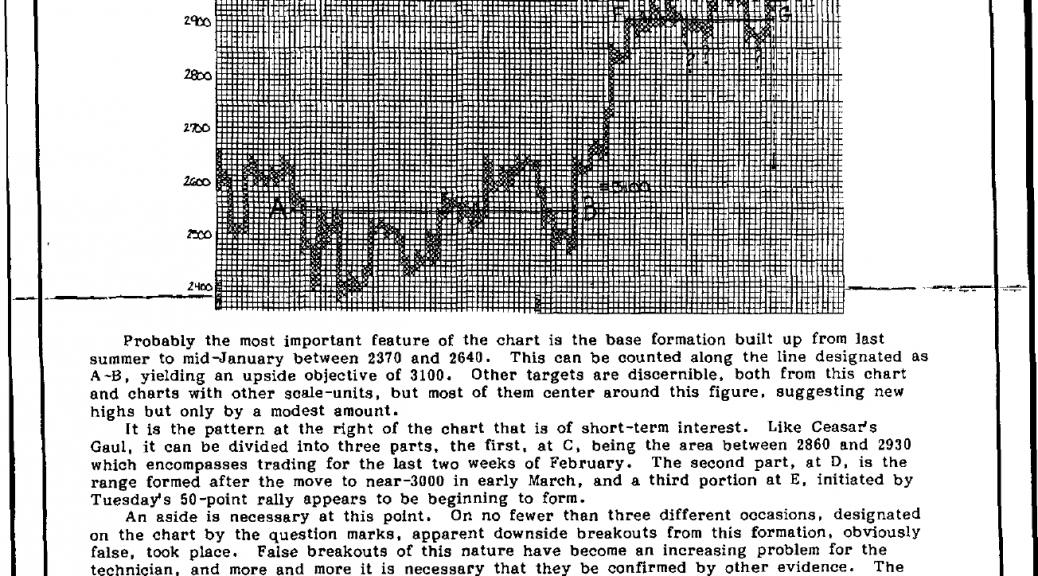 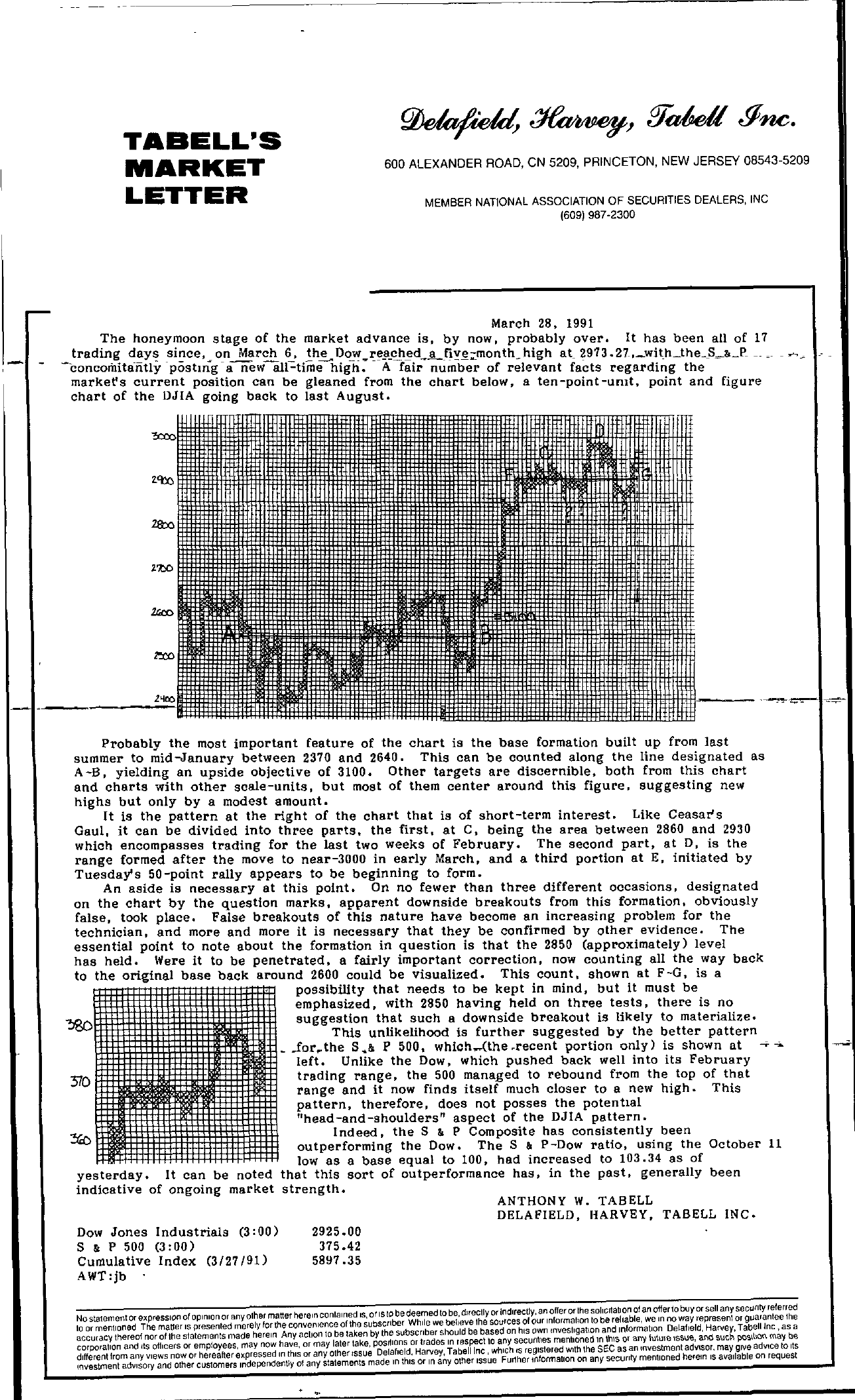 TABELL'S MARKET LETTER 600 ALEXANDER ROAD, CN 5209, PRINCETON, NEW JERSEY 08543-5209 MEMBER NATIONAL ASSOCIATION OF SECURITIES DEALERS, INC (609) 987-2300 March 28. 1991 – The honeymoon stage of the market advance is. by now. probably over. It has been all of 17 trading dayssi!'ce on Mar !h Dow re!l–I1dfi,,;month high at 2973. 27.withthe SLP – concomita-iitly postmg a newall-time high. A fair number of relevant facts regarding the markers current position can be gleaned from the chart below. a ten-point-umt. point and figure chart of the DJIA going back to last August. Probably the most important feature of the chart is the base formation built up from last summer to mid-January between 2370 and 2640. This can be counted along the line designated as A-B. yielding an upside objective of 3100. Other targets are discernible. both from this chart and charts with other scale-units. but most of them center around this figure. suggesting new highs but only by a modest amount. It is the pattern at the right of the chart that is of short-term interest. Like Ceasar's Gaul. it can be divided into three parts. the first. at C. being the area between 2860 and 2930 which encompasses trading for the last two weeks of February. The second part. at D. is the range formed after the move to near-3000 in early March. and a third portion at E. initiated by Tuesday's 50-point rally appears to be beginning to form. An aside is necessary at this point. On no fewer than three different occasions. designated on the chart by the question marks. apparent downside breakouts from this formation. obviously false. took place. False breakouts of this nature have become an increasing problem for the technician. and more and more it is necessary that they be confirmed by other evidence. The essential point to note about the formation in question is that the 2850 (approximately) level has held. Were it to be penetrated. a fairly important correction. now counting all the way back to the original base back around 2600 could be visualized. This count. shown at F -G. is a possibility that needs to be kept in mind. but it must be emphasized. with 2850 having held on three tests. there is no suggestion that such a downside breakout is likely to materialize. This unlikelihood is further suggested by the better pattern \ for. the S.& P 500, which(the .recent portion only) is shown at … -;,. left. Unlike the Dow. which pushed back well into its February iTO trading range. the 500 managed to rebound from the top of that range and it now finds itself much closer to a new high. This pattern. therefore. does not posses the potent,al head -and -shoulders aspect of the DJIA pattern. Indeed. the S & P Composite has consistently been outperforming the Dow. The S & P-Dow ratio. using the October 11 low as a base equal to 100. had increased to 103.34 as of yesterday. It can be noted that this sort of outperformance has. in the past. generally been indicative of ongoing market strength. ANTHONY W. TAB ELL DELAFIELD. HARVEY. TABELL INC. Dow Jones Industrials (300) 2925.00 S & P 500 (300) 375.42 Cumulative Index (3/27/91) 5897.35 AWTjb —