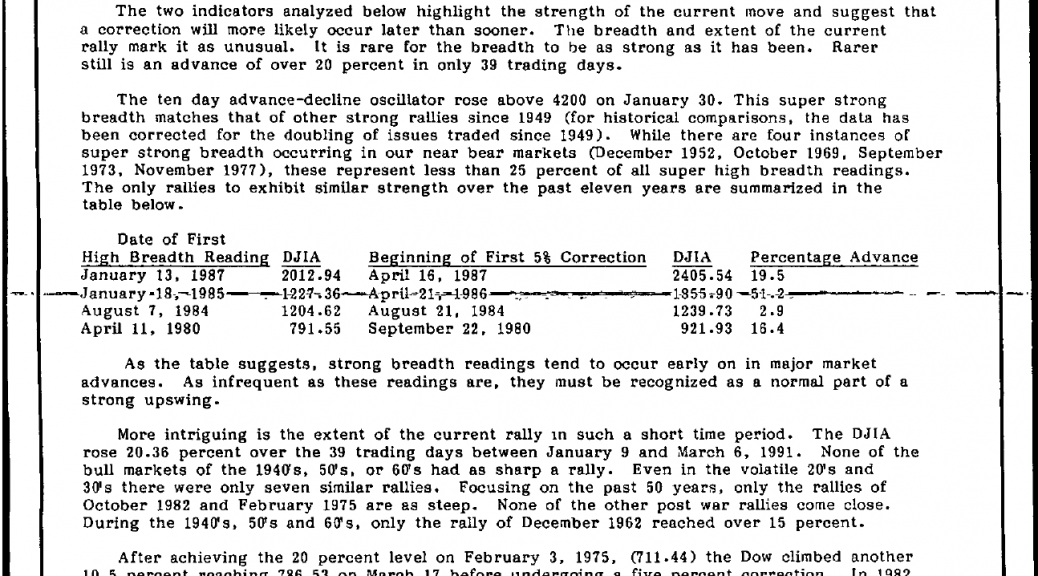 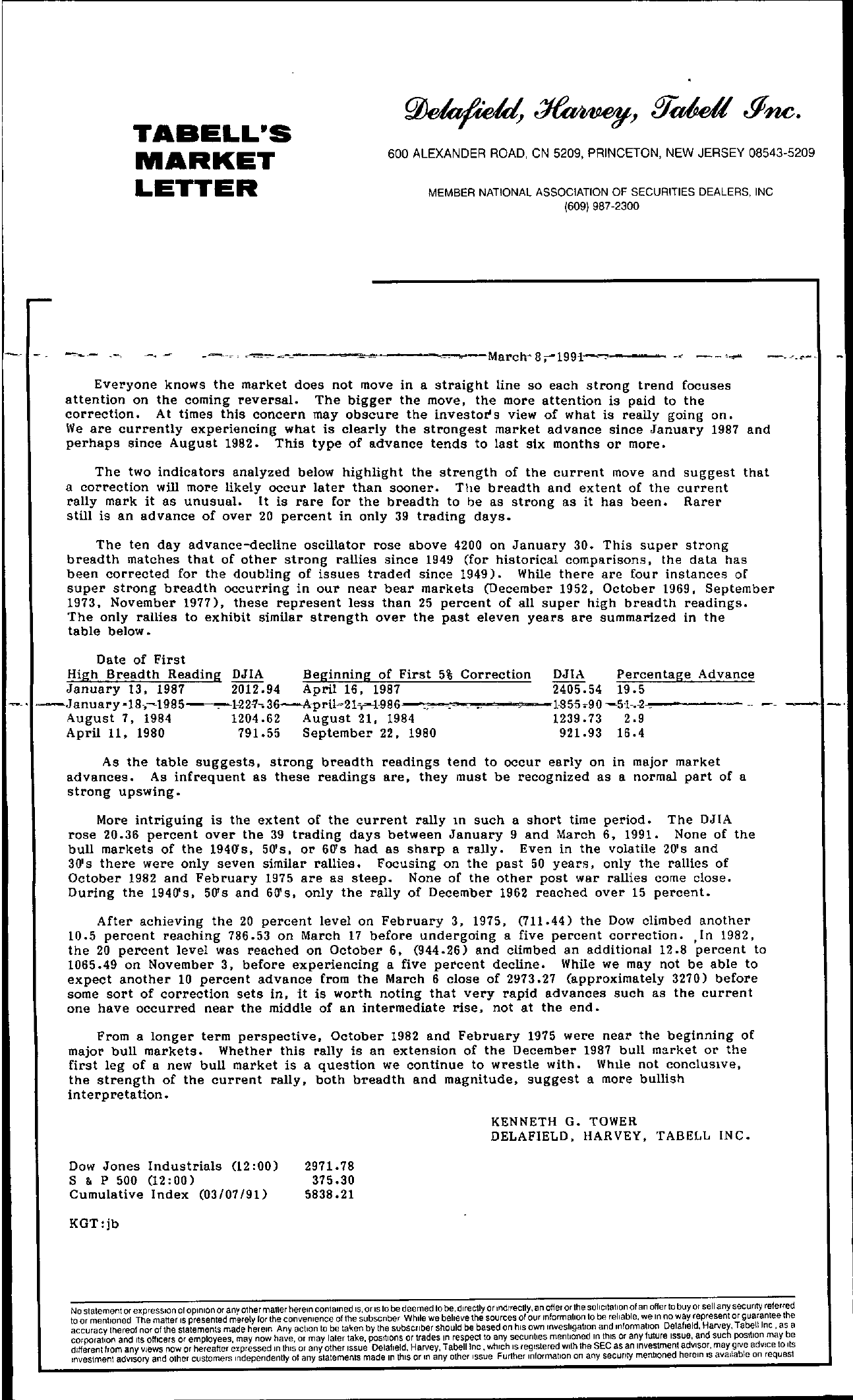 TABELL'S MARKET LETTER 600 ALEXANDER ROAD, CN 5209, PRINCETON, NEW JERSEY 08543-5209 MEMBER NATIONAL ASSOCIATION OF SECURITIES DEALERS, INC (609) 987-2300 – – – – , 8 ———-March .-1991–'—- Everyone knows the market does not move in a straight line so each strong trend focuses attention on the coming reversal. The bigger the move, the more attention is paid to the correction. At times this concern may obscure the investor's view of what is really going on. We are currently experiencing what is clearly the strongest market ad vance since January 1987 and perhaps since August 1982. This type of advance tends to last six months or more. The two indicators analyzed below highlight the strength of the current move and suggest that a correction will more likely occur later than sooner. The breadth and extent of the current rally mark it as unusual. It is rare for the breadth to be as strong as it has been. Rarer still is an advance of over 20 percent in only 39 trading days. The ten day advance-decline oscillator rose above 4200 on January 30. This super strong breadth matches that of other strong rallies since 1949 (for historical comparisons. the data has been corrected for the doubling of issues traded since 1949). While there are four instances of super strong breadth occurring in our near bear markets (December 1952. October 1969, September 1973. November 1977). these represent less than 25 percent of all super high breadth readings. The only rallies to exhibit similar strength over the past eleven years are summarized in the table below. Date of First High Breadth Reading DJIA Beginning of First 5 Correction DJIA Percentage Advance January 13. 1987 2012.94 April 16. 1987 2405.54 19.5 –January-lg.1995—11227.. 36-April-21,–l986-,,-,,-c-..—185;'90 -5-1-.-2. — – August 7. 1984 1204.62 August 21. 1984 1239.73 2.9 April 11. 1980 791.55 September 22. 1980 921.93 16.4 As the table suggests, strong breadth readings tend to occur early on in major market advances. As infrequent as these readings are. they must be recognized as a normal part of a strong upswing. More intriguing is the extent of the current rally m such a short time period. The DJIA rose 20.36 percent over the 39 trading days between January 9 and March 6. 1991. None of the bull markets of the 1940's. 50's, or 60's had as sharp a rally. Even in the volatile 20's and 30' s there were only seven similar rallies. Focusing on the past 50 years. only the rallies of October 1982 and February 1975 are as steep. None of the other post war rallies come close. During the 1940's. 50's and 60's. only the rally of December 1962 reached over 15 percent. After achieving the 20 percent level on February 3. 1975. (711.44) the Dow climbed another 10.5 percent reaching 786.53 on March 17 before undergoing a five percent correction. ,In 1982, the 20 percent level was reached on October 6. (944.26) and climbed an additional 12.8 percent to 1065.49 on November 3. before experiencing a five percent decline. While we may not be able to expect another 10 percent advance from the March 6 close of 2973.27 (approximately 3270) before some sort of correction sets in, it is worth noting that very rapid advances such as the current one have occurred near the middle of an intermediate rise, not at the end. From a longer term perspective. October 1982 and February 1975 were near the beginning of major bull markets, Whether this rally is an extension of the December 1987 bull market or the first leg of a new bull market is a question we continue to wrestle with. While not concluslVe. the strength of the current rally. both breadth and magnitude. suggest a more bullish interpretation. KENNETH G. TOWER DELAFIELD. HARVEY. TABELL INC. Dow Jones Industrials (12 00) S & P 500 (1200) Cumulative Index (03/07/91) 2971. 78 375.30 5838.21 KGTjb -' No statement or expression of opinion or any other matter herein contained IS, or IS to be deemed to be, dlrectty or Indirectly, an ofler or the soliCitation of an offer to buy or sell any secunty relerred to or menlloned The matter IS presented merely for the convenience of the subscnber While we believe the sources of our Information to be reliable, we In no way represent or guarantee the accuracy thereof nor olthe statements made herein Any acllon to be taken by the subSCrIber should be based on hiS own tnvesllgabon and tnformatton Detafteld, Harvey, Tabe!l Inc, as a corpora\!on and ItS officers Of emptoyees, may now have, or may later take, posllIons or trades In respect to any secunbes menllOned In thiS Of any future Issue, and such poSition may be different from any Views now or hereafter expressed In thiS or any other Issue Delafield, Harvey, Tabelllnc, which IS registered WIth the SEC as an Investment adVIsor, maygrve adVice to Its Investment adVISOry and other customers Independently of any statements made In thiS or In any other ISSue Further information on any security mentIOned herein IS available on request