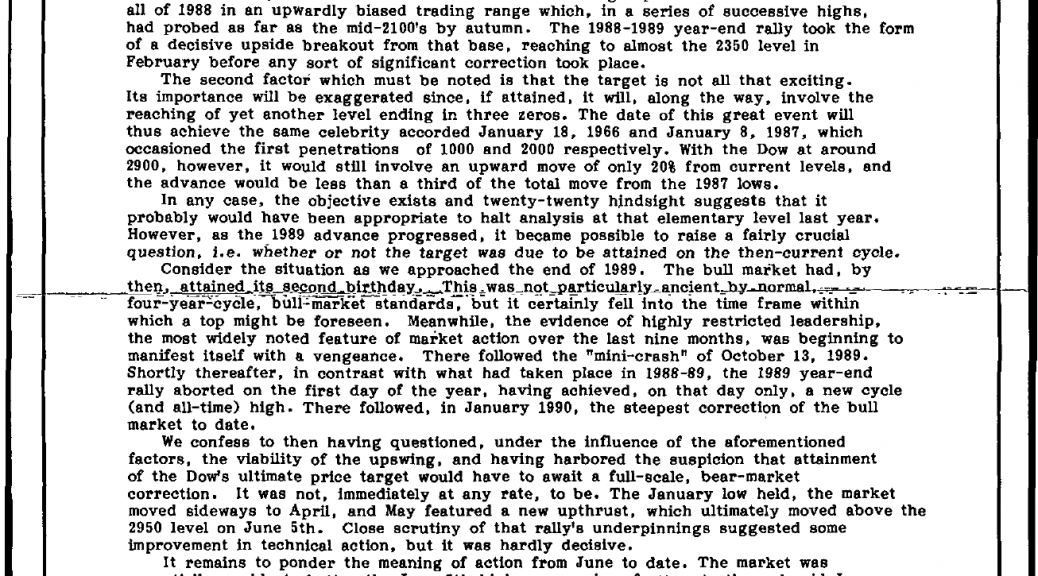 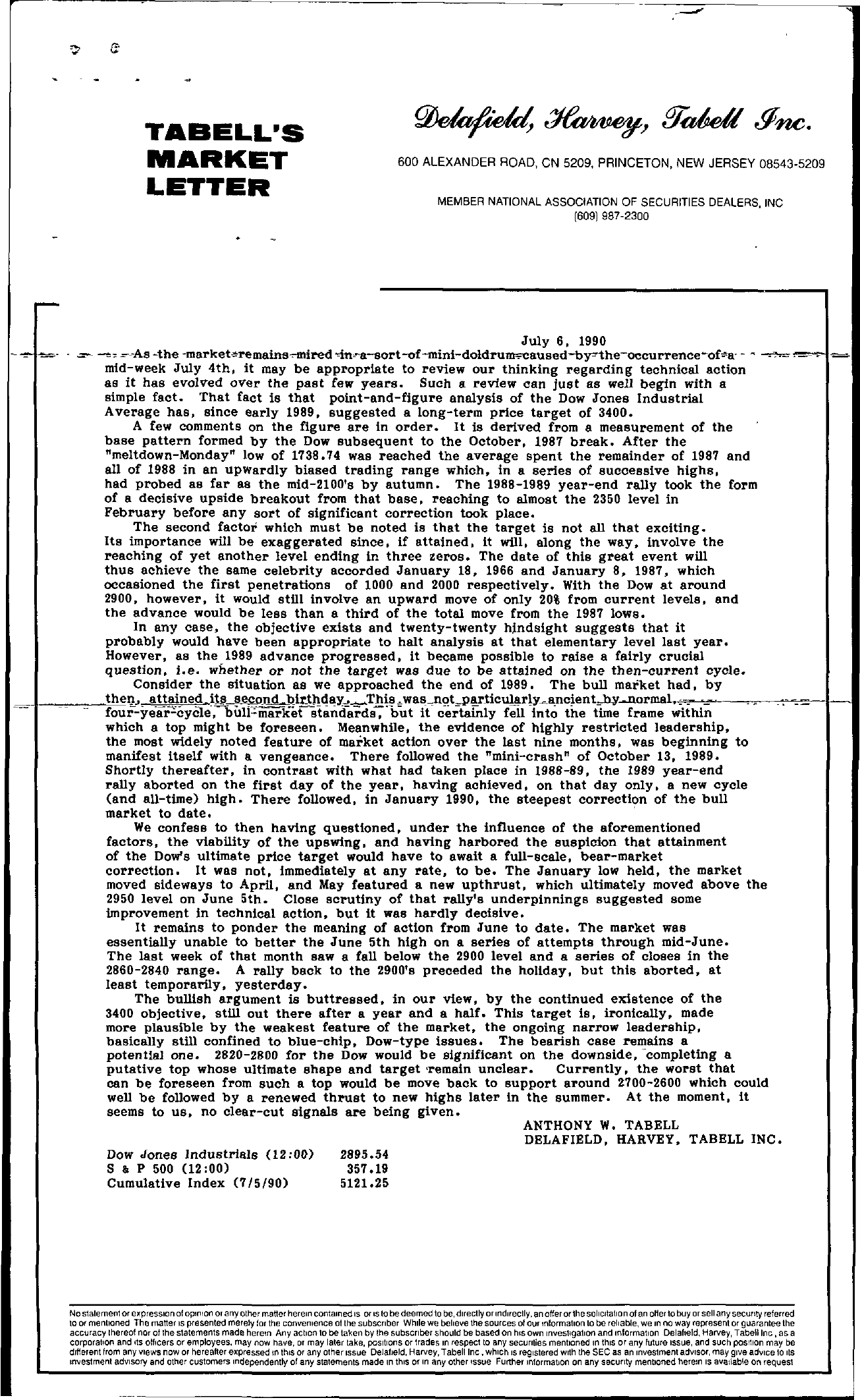 TABELL'S MARKET LETTER 600 ALEXANDER ROAD, CN 5209, PRINCETON, NEW JERSEY 08543-5209 MEMBER NATIONAL ASSOCIATION OF SECURITIES DEALERS, INC (609J 987-2300 July 6, 1990 – — . , -As -the -markebremain8ired -ina-sort-of4llini-doldTUaused-brthe-oecurrence-ofB. – – .. mid-week July 4th, it may be appropriate to review our thinking regarding technical action as it has evolved OVer the past few years. Such a review can just as well begin with a simple fact. That fact is that point-and-figure analysis of the Dow Jones Industrial Average has, since early 1989, suggested a long-term price target of 3400. A few comments on the figure are in order. It is derived from a measurement of the base pattern formed by the Dow subsequent to the October, 1987 break. After the meltdown-Monday low of 1738.74 was reached the average spent the remainder of 1987 and all of 1988 in an upwardly biased trading range which, In a series of successive highs, had probed as far as the mid-2100's by sutumn. The 1988-1989 year-end rally took the form of a decisive upside breakout from that base, reaching to almost the 2350 level In February before any sort of significant correction took place. The second factor which must be noted Is that the target is not all that exciting. Its importance will be exaggerated since, if attained, it will, along the way, involve the reaching of yet another level ending in three zeros. The date of this great event will thus achieve the same celebrity accorded January 18. 1966 and January 8. 1987, which occasioned the first penetrations of 1000 and 2000 respectively. With the Dow at around 2900, however, it would still involve an upward move of only 20 from current levels, and the advance would be less than a third of the total move from the 1987 lows. In any case, the objective exists and twenty-twenty hindsight suggests that it probably would have been appropriate to halt analysis at that elementary level last year. However, as the 1989 advance progressed, It became possible to raise a fairly crucial question, i.e. whether or not the target was due to be attained on the then-current cycle. Consider the situation as we approached the end of 1989. The bull market had, by ,—,.,——th-,e'Qt attained its seco.nd blr.thdaYJThis wasnot,..par.ticularlyancient,)ly-normal.,'e'……..——..o—I four-yearcycle, bul1mark-efBtaiuiards-but It certainly fell -Into the time frame within which a top might be foreseen. Meanwhile, the evidence of highly restricted leadership, the most widely noted feature of market action over the last nine months, was beginning to manifest Itself with a vengeance. There followed the mini-crash of October 13, 1989. Shortly thereafter, in contrast with what had taken place in 1988-89, the 1989 year-end rally aborted on the first day of the year, having achieved, on that day only, a new cycle (and all-time) high. There followed, in January 1990, the steepest correction of the bull market to date. ' We confess to then having questioned, under the Influence of the aforementioned factors, the viability of the upswing, and having harbored the suspicion that attainment of the Dow's ultimate price target would have to await a full-scale, bear-market correction. It was not, Immediately at any rate, to be. The January low held, the market moved sideways to April, and May featured a new upthrust, which ultimately moved above the 2950 level on June 5th. Close scrutiny of that rally's underpinnings suggested some improvement in technical action, but It was hardly decisive. It remains to ponder the meaning of action from June to date. The market was essentislly unable to better the June 5th high on a series of attempts through mid-June. The last week of that month saw a fall below the 2900 level and a series of closes In the 2860-2840 range. A rally back to the 2900's preceded the holiday, but this aborted, at least temporarily, yesterday. The bullish argument is buttressed, in our view, by the continued existence of the 3400 objective, still out there after a year and a half. This target is, Ironically, made more plausible by the weakest feature of the market, the ongoing narrow leadership, basically still confined to blue-chip, Dow-type Issues. The bearish case remains a potentlal one. 2820-2800 for the Dow would be significant on the downside, completing a putative top whose ultimate shape and target 'remain unclear. Currently, the worst that can be foreseen from such a top would be move back to support around 2700-2600 which could well be followed by a renewed thrust to new highs later in the summer. At the moment, It seems to us, no clear-cut signals are being given. ANTHONY W. TABELL DELAFIELD, HARVEY, TAB ELL INC. Dow Jones Industrials (12 00) 2895.54 S & P 500 (1200) 357.19 Cumulative Index (7/5/90) 5121.25 No statement or expression of opinion or any other matter herein contained IS or IS to be deemed to be, directly or indirectly, an offer orthe soliCitation of an offer to buy or sell any secUrity referred to or mentioned The matter IS presented merely for the convemence of the subSCriber While we believe the sources of our Information to be rehable, we In no way represent or guarantee the accuracy thereof nOr of the statements made herem Any action to be taken by the subSCriber should be based on hiS own Investigation and InfOrmation Delafield, Harvey, Taben Inc, as a corporation and ItS officers or employees, may now have, or may later take, positions or trades In respect to any securities mentioned In thiS or any future Issue, and such position may be different from any Views now or hereafter expressed In thiS or any other Issue Delafield, Harvey, Tabell Inc, which IS registered With the SEC as an Investment adVisor, may give adVice to ItS Investment adVISOry and other customers Independently of any statements made In thiS or In any other Issue Further information on any secunty mentioned herein IS available on request