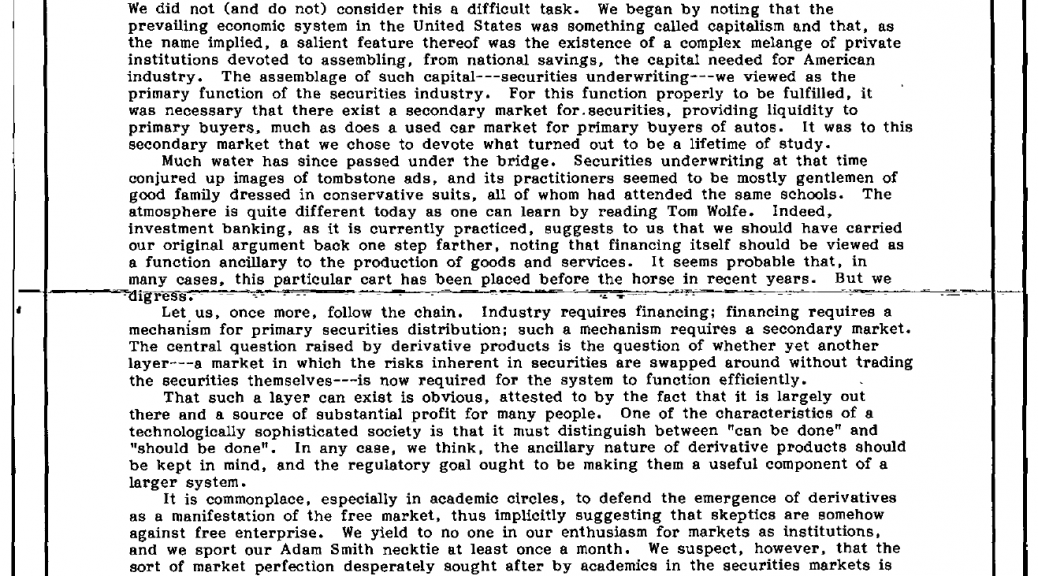 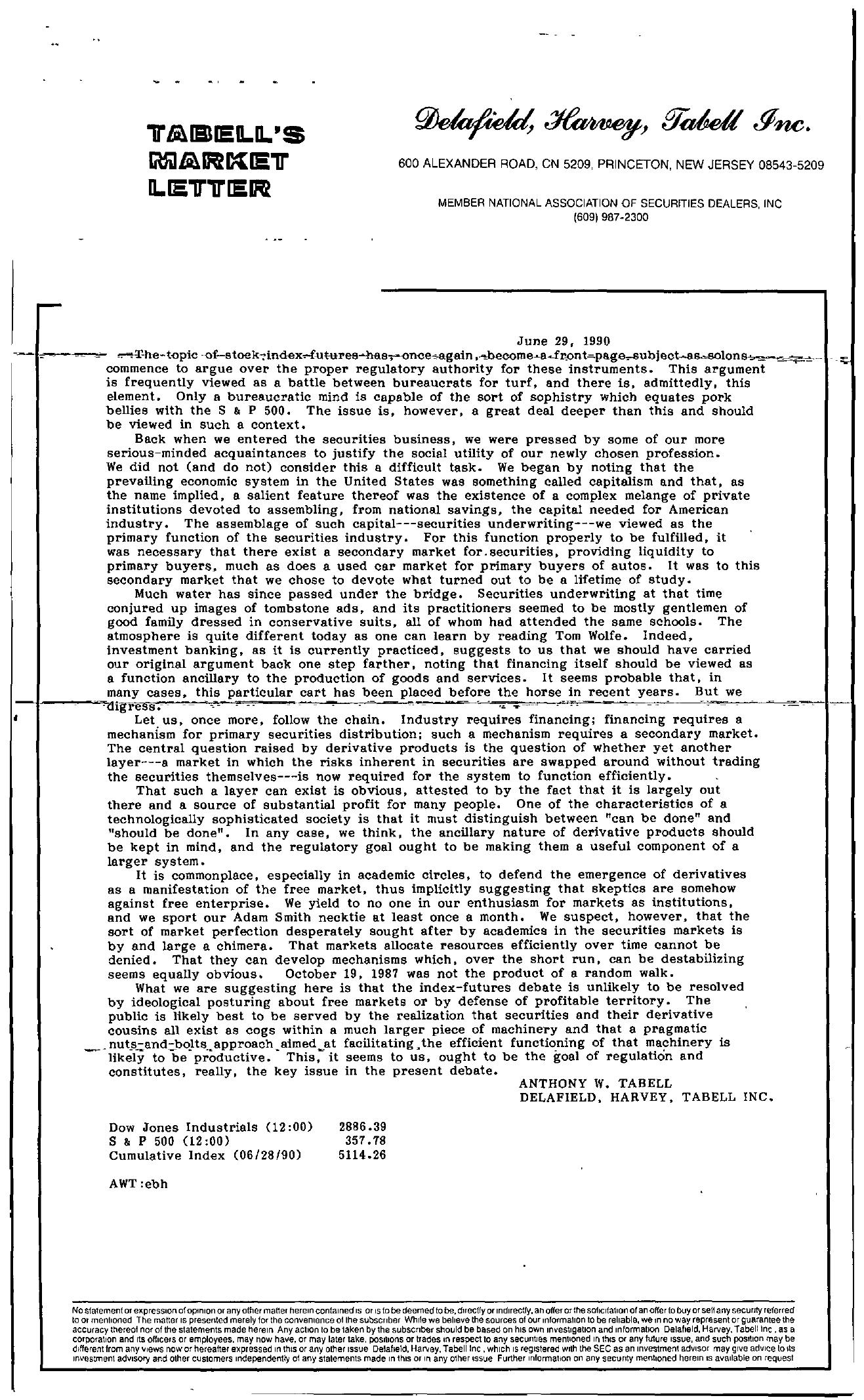 1IBUED..D..'S IRlIE1 D.. l e T T I E R 600 ALEXANDER ROAD, CN 5209, PRINCETON, NEW JERSEY 08543-5209 MEMBER NATIONAL ASSOCIATION OF SECURITIES DEALERS, INC (609) 987-2300 June 29, 1990 -Thet()pic -of.-stoek-index''f-utures..ha.s.,….once–again .become–8.,..fontp8.ge-8ubiect… as…,,801onB commence to argue over the proper regulatory authority for these instruments. This argument is frequently viewed as a battle between bureaucrats for turf, and there is, admittedly, this element. Only a bureaucratic mind is capable of the sort of sophistry which equates pork bellies with the S & P 500. The issue is, however, a great deal deeper than this and should be viewed in such a context. Back when we entered the securities business, we were pressed by some of our more serious-minded acquaintances to justify the social utility of our newly chosen profession. We did not (and do not) consider this a difficult task. We began by noting that the prevailing economic system in the United States was something called capitalism and that. as the name implied, a salient feature thereof was the existence of a complex melange of private institutions devoted to assembling, from national savings, the capital needed for American industry. The assemblage of such capital—securities underwriting—we viewed as the primary function of the securities industry. For this function properly to be fulfilled, it was necessary that there exist a secondary market for. securities, providing liquidity to primary buyers, much as does a used car market for primary buyers of autos. It was to this secondary market that we chose to devote what turned out to be a lifetime of study. Much water has since passed under the bridge. Securities underwriting at that time conjured up images of tombstone ads, and its practitioners seemed to be mostly gentlemen of good family dressed in conservative suits. all of whom had attended the same schools. The atmosphere is quite different today as one can learn by reading Tom Wolfe. Indeed, investment banking, as it is currently practiced. Buggests to us that we should have carried our original argument back one step farther, noting that finanCing itself should be viewed as a function ancillary to the production of goods and services. It seems probable that, in many cases. this particular cart has been placed before the horse in recent years But we –I—-,,digress. . . . .. – .. Let us, once more, follow the chain. Industry requires financing; financing requires a mechanism for primary securities distribution; such a mechanism requires a secondary market. The central question raised by derivative products is the question of whether yet another layer—a market in which the risks inherent in securities are swapped around without trading the securities themselves—is now required for the system to function efficiently. That such a layer can exist is obvious, attested to by the fact that it is largely out there and a source of substantial profit for many people. One of the characteristics of a technologically sophisticated society is that it must distinguish between can be done and should be done. In any case, we think. the ancillary nature of derivative products should be kept in mind, and the regUlatory goal ought to be making them a useful component of a larger system. It is commonplace. especially in academic circles, to defend the emergence of derivatives as a manifestation of the free market, thus implicitly suggesting that skeptics are somehow against free enterprise. We yield to no one in our enthusiasm for markets as institutions, and we sport our Adam Smith necktie at least once a month. We suspect, however, that the sort of market perfection desperately sought after by academics in the securities markets is by and large a chimera. That markets allocate resources efficiently over time cannot be denied. That they can develop mechanisms which, over the short run, can be destabilizing seems equally obvious. October 19, 1987 was not the product of a random walk. What we are suggesting here is that the index-futures debate is unlikely to be resolved by ideological posturing about free markets or by defense of profitable territory. The public is likely best to be served by the realization that securities and their derivative cousins all exist as cogs within a much larger piece of machinery and that a pragmatic . nut.s..;and.boJts. approach aimedat facilitating. the efficient functioning of that mahinery is likely to be productive. This, it seems to us, ought to be the goal of regulation and constitutes, really. the key issue in the present debate. ANTHONY W. TABELL DELAFIELD, HARVEY, TABELL INC. Dow Jones Industrials (12 00) S & P 500 (1200) Cumulative Index (06/28/90) 2886.39 357.78 5114.26 AWTebh No statement or expression ofOpinion or any other matter herein contained IS or IS to be deemed to be, dlreclfy or Indlrectiy, an offer or lfle SoliCitation of an offer to buy or seU any security referred to or mentioned The matter IS presented merely for the convenience 01 the subSCriber White we believe the sources 01 our InformaMn to be reliable, we In no way represent or guarantee the accuracy thereot nor of the statements made herein Any action to be taken by the subSCriber should be based on hiS own Investigation and information Delafield, Harvey, Tabellinc ,as a corporation and Its officers or employees, may now have, or may later take, poSitions or trades In respect 10 any secuntles mentioned In this or any Mure Issue, and such poSition may be different from any Views now or hereafter expressed In this or any other Issue Delafield, Harvey, Tabelltnc ,WhiCh IS registered With the SEC as an Investment advisor may give advice to ItS Investment advIsory and other customers Independently 01 any statements made In this or In any other Issue Further InformaMn on any security mentioned herein IS available on request