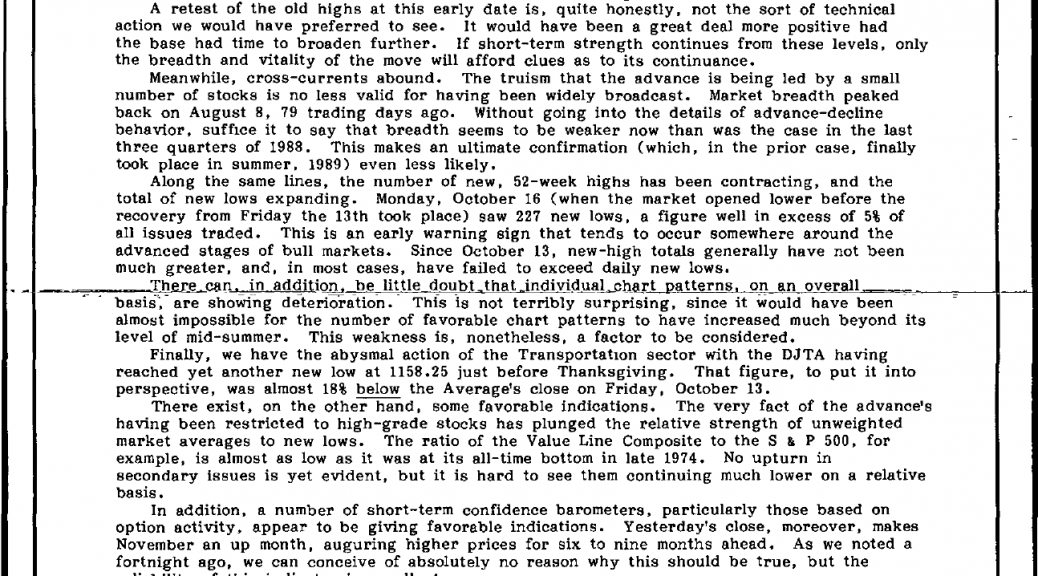 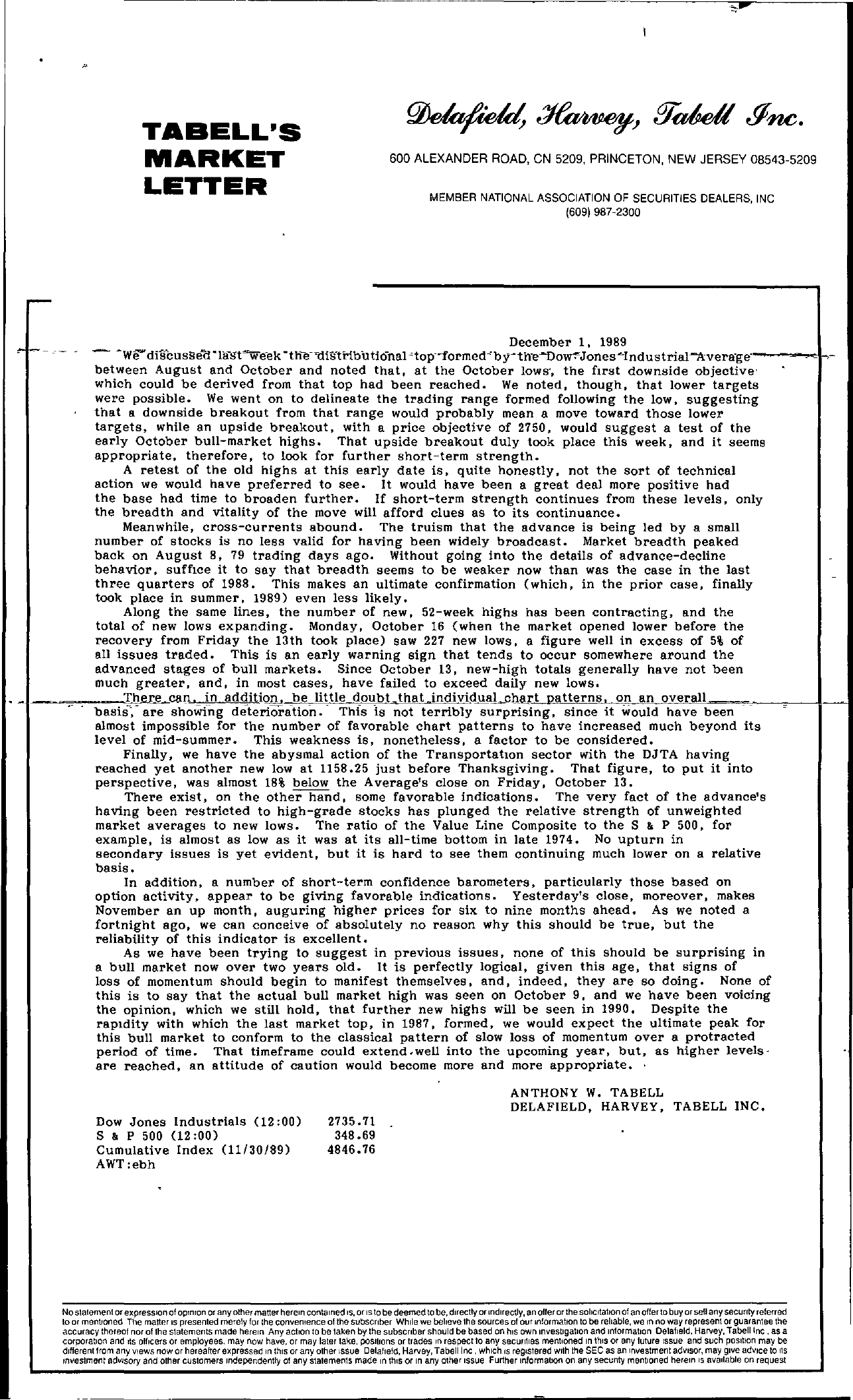 TABELL'S MARKET LETTER 600 ALEXANDER ROAD, CN 5209, PRINCETON, NEW JERSEY 08543-5209 MEMBER NATIONAL ASSOCIATION OF SECURITIES DEALERS, INC (609) 987-2300 December 1. 1989 ,– – Wediscuseo llfstweek tlle-lIistributional top–formed b y-th'e-1)owJones I ndu strial'Avera-ge—-….. between August and October and noted that, at the October lows', the fIrst downside objective' which could be derived from that top had been reached. We noted. though. that lower targets were possible. We went on to delineate the trading range formed following the low. suggesting that a downside breakout from that range would probably mean a move toward those lower targets. while an upside breakout. with a price objective of 2750. would suggest a test of the early October bull-market highs. That upside breakout duly took place this week. and it seems appropriate. therefore. to look for further short-term strength. A retest of the old highs at this early date is. quite honestly. not the sort of technical action we would have preferred to see. It would have been a great deal more positive had the base had time to broaden further. If short-term strength continues from these levels. only the breadth and vitality of the move will afford clues as to its continuance. Meanwhile, cross-currents abound. The truism that the advance is being led by a small number of stocks is no less valid for having been widely broadcast. Market breadth peaked back on August 8, 79 trading days ago. Without going into the details of advance-decline behavior. suffIce it to say that breadth seems to be weaker now than was the case in the last three quarters of 1988. This makes an ultimate confirmation (which, in the prior case, finally took place in summer. 1989) even less likely. Along the same lines, the number of new, 52-week highs has been contracting, and the total of new lows expanding. Monday. October 16 (when the market opened lower before the recovery from Friday the 13th took place) saw 227 new lows. a figure well in excess of 5 of all issues traded. This is an early warning sign that tends to occur somewhere around the advanced stages of bull markets. Since October 13. new-high totals generally have not been much greater. and, in most cases, have failed to exceed daily new lows. 1….,,..,. ,.J1JleJ'.Lcan. in addition, be little doubt that indivillua.LcbJ!J'Lllatterns on an overall basis – are showing deterioration. – This is not terribly surprising, since it would have been almost impossible for the number of favorable chart patterns to have increased much beyond its level of mid-summer. This weakness is, nonetheless, a factor to be considered. Finally. we have the abysmal action of the TransportatIon sector with the DJTA having reached yet another new low at 1158.25 just before Thanksgiving. That figure. to put it into perspective. was almost 18 below the Average's close on Friday. October 13. There exist, on the other hand, some favorable indications. The very fact of the advance's having been restricted to high-grade stocks has plunged the relative strength of unweighted market averages to new lows. The ratio of the Value Line Composite to the S & P 500. for example, is almost as low as it was at its all-time bottom in late 1974. No upturn in secondary issues is yet evident, but it is hard to see them continuing much lower on a relative basis. In addition, a number of short-term confidence barometers, particularly those based on option activity, appear to be giving favorable indications. Yesterday's close, moreover, makes November an up month, auguring higher prices for six to nine months ahead. As we noted a fortnight ago. we can conceive of absolutely no reason why this should be true. but the reliability of this indicator is excellent. As we have been trying to suggest in previous issues, none of this should be surprising in a bull market now over two years old. It is perfectly logical. given this age. that signs of loss of momentum should begin to manifest themselves, and, indeed, they are so doing. None of this is to say that the actual bull market high was seen on October 9. and we have been voicing the opinion. which we still hold. that further new highs will be seen in 1990. Despite the rapldity with which the last market top. in 1987. formed. we would expect the ultimate peak for this bull market to conform to the classical pattern of slow loss of momentum over a protracted period of time. That timeframe could extend well into the upcoming year, but, as higher levelsare reached, an attitude of caution would become more and more appropriate. ' Dow Jones Industrials (12 00) S & P 500 (1200) Cumulative Index (11/30/89) AWTebh 2735.71 348.69 4846.76 ANTHONY W. TABELL DELAFIELD. HARVEY. TABELL INC. No statement or expression of opinion or any other matter herein contained IS, or IS to be deemed to be, directly or Indirectly, an offer orthe soliCitatIOn of an offer to buy or sell any secunty referred to or menboned The matter IS presented merely for the convenience of the subscnber While we believe the sources 01 our InformatIOn to be rehable, we In no way represent or guarantee the accuracy thereof nor of the statements made herein Any action to be taken by the subscriber should be based on hiS own investigation and information Delafield, Harvey, Tabel! Inc, as a corporation and lis officers or employees, may now have, or may later take, poSitions or trades In respect to any securities mentioned In thiS or any future Issue and such POSition may be different from any views now or hereafter expressed In thiS or any other Issue Delafield, Harvey, Tabel! Inc, which IS registered wllh Ihe SEC as an Investment adVisor, may give adVice to ItS tnveslmenl adViSOry and other customers Independently of any statements made In thiS or In any other Issue Further Informabon on any secunty mentioned herem IS available on request