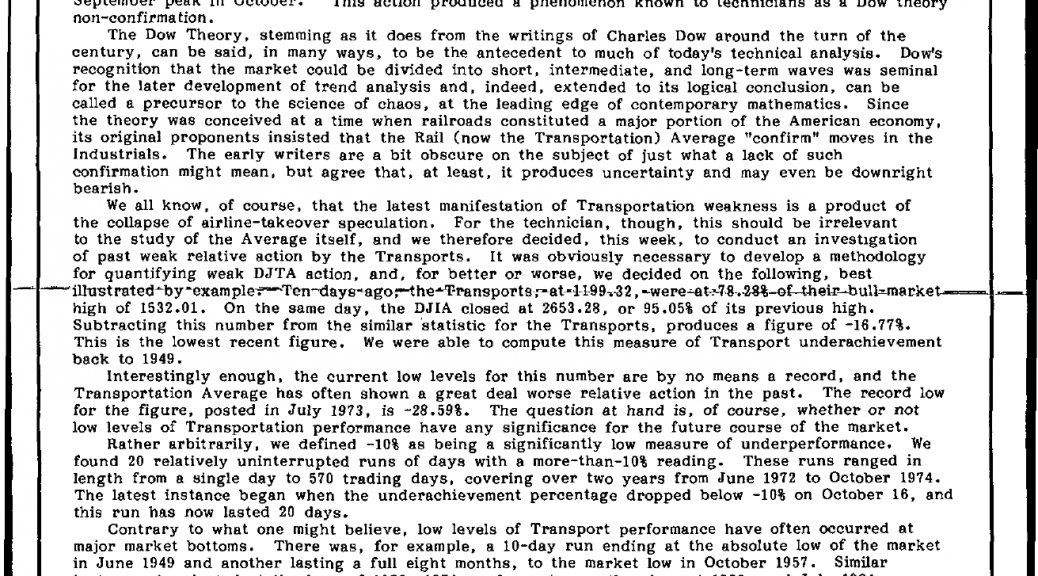 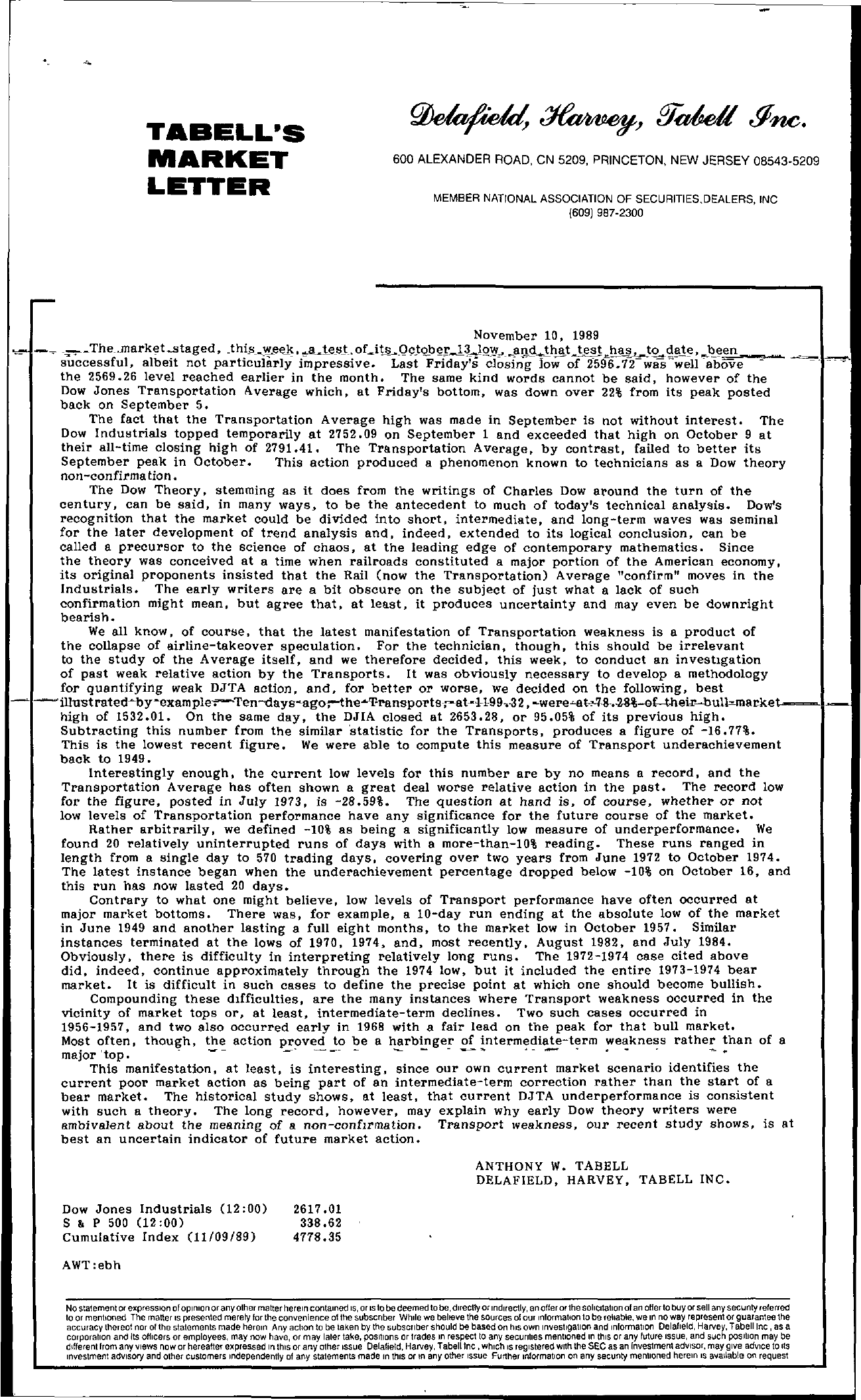 TABELL'S MARKET LETTER 600 ALEXANDER ROAD, eN 5209, PRINCETON, NEW JERSEY 08543-5209 MEMBER NATIONAL ASSOCIATION OF SECURITIES. DEALERS, INC (609) 987-2300 November 10, 1989 I – The,market..staged, JhiS\!'M. aesL ofi!QcJ2-b!'-.l3.,!Q)Yalld!haJ.!est haJl, .t2..cI!,je, be;e;;n;.-…..,,…. successful, albeit not particularly impressive. Last Friday's closing low of 2-596.72-was-well-above – – the 2569.26 level reached earlier in the month. The same kind words cannot be said. however of the Dow Jones Transportation Average which, at Friday's bottom was down over 22 from its peak posted back on September 5. The fact that the Transportation Average high was made in September is not without interest. The Dow Industrials topped temporarily at 2752.09 on September 1 and exceeded that high on October 9 at their all-time closing high of 2791.41. The Transportation Average. by contrast, failed to better its September peak in October. This action produced a phenomenon known to technicians as a Dow theory non-confirma tion;O The Dow Theory, stemming as it does from the writings of Charles Dow around the turn of the century J can be said. in many ways, to be the antecedent to much of today's technical analysis. Dow's recognition that the market could be divided into short, intermediate, and long-term waves was seminal for the later development of trend analysis and. indeed, extended to its logical conclusion, can be called a precursor to the science of chaos, at the leading edge of contemporary mathematics. Since the theory was conceived at a time when railroads constituted a major portion of the American economy, its original proponents insisted that the Rail (now the Transportation) Average confirm moves in the Industrials. The early writers are a bit obscure on the subject of just what a lack of such confirmation might mean, but agree that, at least. it produces uncertainty and may even be downright bearish. We all know. of cour!le. that the latest manifestation of Transportation weakness is a product of the collapse of airline-takeover speculation. For the technician, though. this should be irrelevant to the study of the Average itself, and we therefore decided, this week, to conduct an investlgation of past weak relative action by the Transports. It was obviously necessary to develop a methodology for quantifying weak DJTA action, and, for better or worse, We decided on the following, best – -ilIustratedby-example.–Ten-dtlys-ago;-the'l'ransports—atA-l99.-32, -wePeaW-8-.-m–Gt'–t-heirbullmaket– high of 1532.01. On the same day, the DJIA closed at 2653.28, or 95.05 of its previous high. Subtracting this number from the similar 'statistic for the Transports, produces a figure of -16.77. This is the lowest recent figure. We were able to compute this measure of Transport underachievement back to 1949. Interestingly enough, the current low levels for this number are by no means a record. and the Transportation Average has often shown a great deal worse relative action in the past. The record low for the figure, posted in July 1973, is -28.59. The question at hand is, of course, whether or not low levels of Transportation performance have any significance for the future course of the market. Rather arbitrarily. we defined -10 as being a significantly low measure of underperformance. We found 20 relatively uninterrupted runs of days with a more-than-l0 reading. These runs ranged in length from a single day to 570 trading days, covering over two years from June 1972 to October 1974. The latest instance began when the underachievement percentage dropped below -10 on October 16, and this run has now lasted 20 days. Contrary to what one might believe. low levels of Transport performance have often occurred at major market bottoms. There was, for example, a 10-day run ending at the absolute low of the market in June 1949 and another lasting a full eight months, to the market low in October 1957. Similar instances terminated at the lows of 1970, 1974, and, most recently, August 1982, and July 1984. Obviously, there is difficulty in interpreting relatively long runs. The 1972-1974 case cited above did, indeed, continue approximately through the 1974 low, but it included the entire 1973-1974 bear market. It is difficult in such cases to define the precise point at which one should become bullish. Compounding these dIfficulties, are the many instances where Transport weakness occurred in the vicinity of market tops or, at least, intermediate-term declines. Two such cases occurred in 1956-1957, and two also occurred early in 1968 with a fair lead on the peak for that bull market. Most often, though, the action proved to be a harbinger of intermediate-term weakness rather than of 8 major 'top. – — – — – — – – —- . – – – …. 7- .. This manifestation, at least, is interesting. since our own current market scenario identifies the current poor market action as being part of an intermediate-term correction rather than the start of a bear markeL The historical study shows, at least. that current DJTA underperformance is consistent with such 8 theory. The long record. however, may explain why early Dow theory writers were ambivalent about the meaning of a non-conflrmation. Transport weakness, our recent study shows, is at best an uncertain indicator of future market action. ANTHONY W. TABELL DELAFIELD, HARVEY, TABELL INC. Dow Jones Industrials 02 00) S & P 500 (12 00) Cumulative Index (11/09/89) 2617.01 338.62 4718.35 AWTebh No statement or 8)(preSSIOO of opinion or anyolher malter herein contained IS, or IS to be deemed to be, dlrecllyor Indirectly, an offer Ol'the soliCitation of an offerlo buy or sell any secunty referred to or mentIOned The matter IS presented merely for the convenience of the subscnber While we believe the sources of our Information to be rehable, we In no way represent or guarantee the accuracy thereof nor of the statements made herein Any acllOn to be taken by the subSCriber should be based on hiS own Investlgallon and Information Delafield, Harvey, Tabelllnc, as a corporallon and Its officers or employees, may now have, or may later take, positions or trades In respect to any securities mentioned In thiS or any future Issue, and such posilion may be different from any views now or hereafter expressed In thiS or any other Issue Delafield, Harvey, Tabelllnc , which IS registered With the SEC as an investment adVisor, may give adVice to Its Investment adVISOry and other customers Independently of any statements made In thiS or In any other Issue Further Information on any secunty mentioned herem IS available on request