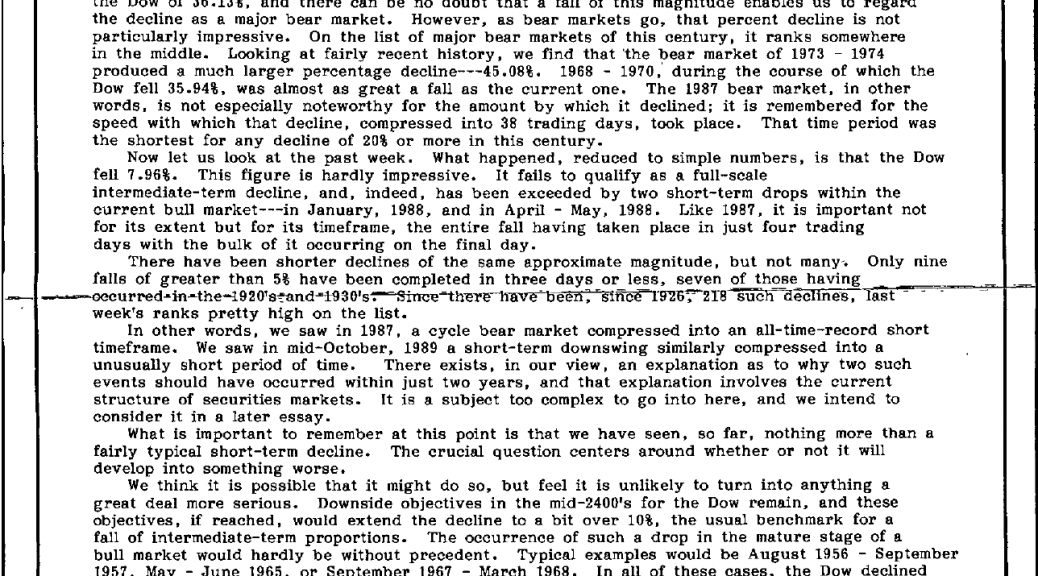 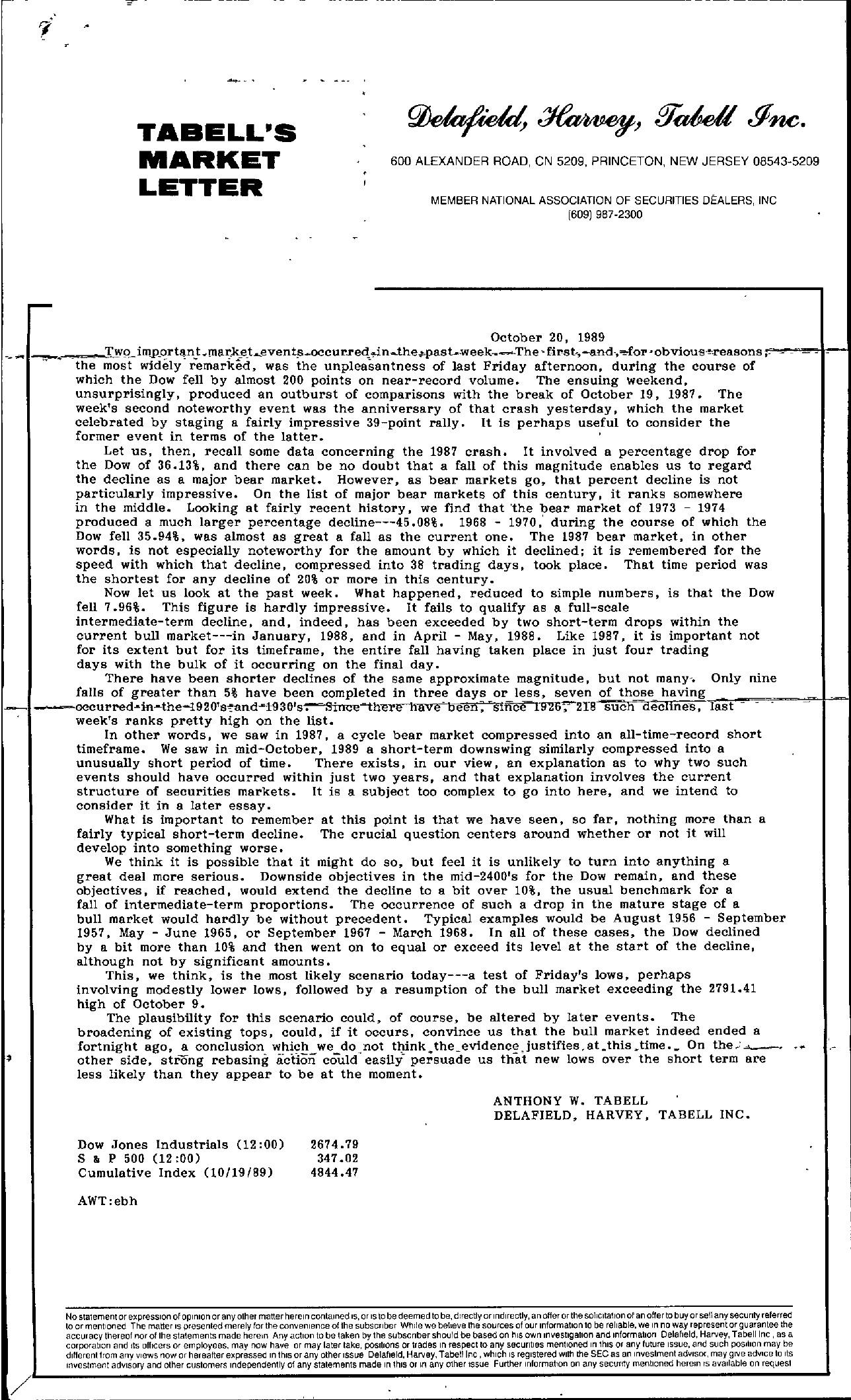 ——- ———————————————-. TABELL'S MARKET LETTER 600 ALEXANDER ROAD, CN 5209, PRINCETON, NEW JERSEY 08543-5209 MEMBER NATIONAL ASSOCIATION OF SECURITIES DEALERS, INC (609) 987-2300 October 20, 1989 .-…T.w..oim,p-ortan t … mar,ket…..e. vents…occur.red i ntheJ'-pastweekThe f-ir-st, -and.for J obvious-reasons .'—-'– -,,-. the most Widely'remarked, was the unpleasantness of last Friday afternoon, during the course of which the Dow fell by almost 200 points on near-record volume. The ensuing weekend. unsurprisingly, produced an outburst of comparisons with the break of October 19, 1987, The week's second noteworthy event was the anniversary of that crash yesterday, which the market celebrated by staging a fairly impressive 39-point rally, It is perhaps useful to consider the former event in terms of the latter. Let us, then, recall some data conceming the 1987 crash. It involved a percentage drop for the Dow of 36.13, and there can be no doubt that a fall of this magnitude enables us to regard the decline as a major bear market. However. as bear markets go. that percent decline is not particularly impressive. On the list of major bear markets of this century J it ranks somewhere in the middle. Looking at fairly recent history, we find that 'the bear market of 1973 – 1974 produced a much larger percentage deciine—45.08. 1968 – 1970. during the course of which the Dow fell 35.94, was almost as great a fall as the current one. The 1987 bear market, in other words, is not especially noteworthy for the amount by which it declined; it is remembered for the speed with which that decline, compressed into 38 trading days. took place. That time period was the shortest for any decline of 20 or more in this century. Now let us look at the past week. What happened, reduced to simple numbers, is that the Dow fell 7.96. This figure is hardly impressive. It fails to qualify as a full-scale intermediate-term decline, and. indeed. has been exceeded by two short-term drops within the current bull market—in January, 1988, and in April – May, 1988. Like 1987, it is important not for its extent but for its timeframe, the entire fall having taken place in just four trading days with the bulk of it occurring on the final day. There have been shorter declines of the same approximate magnitude. but not many-. Only nine falls of greater than 5 have been completed in three days or less, seven of those having , —GCCurred…. in–the-l920tsnd96's. Sjilce-th–eeen, sinceI926721-S–sliCnaecime-s. last – – week's ranks pretty high on the list. In other words. we saw in 1987. a cycle bear market compressed into an all-time-record short timeframe. We saw in mid-October, 1989 a short-term downswing similarly compressed into a unusually short period of time. There exists, in our view, an explanation as to why two such events should have occurred within just two years. and that explanation involves the current structure of securities markets. It is a subject too complex to go into here, and we intend to consider it in a later essay. What is important to remember at this point is that we have seen, so far, nothing more than a fairly typical short-term decline. The crucial question centers around whether or not it will develop into something worse. We think it is possible that it might do so, but feel it is unlikely to turn into anything a great deal more serious. Downside objectives in the mid-2400's for the Dow remain, and these objectives, if reached, would extend the decline to a bit over 10, the usual benchmark for a fall of intermediate-term proportions. The occurrence of such a drop in the mature stage of a bull market would hardly be without precedent. Typical examples would be August 1956 – September 1957, May – June 1965, or September 1967 – March 1968. In all of these cases, the Dow declined by a bit more than 10 and then went on to equal or exceed its level at the start of the decline, although not by significant amounts. This, we think, is the most likely scenario today—a test of Friday's lows, perhaps involving modestly lower lows, followed by a resumption of the bull market exceeding the 2791.41 high of October 9. The plausibility for this scenario CQuld, of course, be altered by later events. The broadening of existing tops, could, if it occurs, convince us that the bull market indeed ended a fortnight ago, a conclusion W!!wedo,not tink .. theevidencjustifies.at-thistime …. On the ,.. other side, strong rebasing action could easily persuade us that new lows over the short term are less likely than they appear to be at the moment. ANTHONY W. TABELL DELAFIELD, HARVEY, TABELL INC. Dow Jones Industrials (12 00) S & P 500 (12 00) Cumulative Index (0119189) 2674.79 347.02 4844.47 AWTebh No statement or expression of opinion or any other matter herein contained IS, or IS to be deemed to be, directly or Indirectly, an oHer or the soliCitation of an oHer to buy or sell any seCUrity referred to or mentioned The matter IS presented merely for the convenience of the subscriber While we believe the sources of our Information to be rehable, we In no way represent or guarantee the accuracy thereof nor of the statements made herein Any action to be taken by the subSCriber should be based on hiS own investigation and Information Delafield, Harvey, Tabellinc , as a corporation and Its officers or employees. may now have or may later take, poSitions or trades In respect to any seCUrities mentioned In thiS or any future Issue, and such pOSition may be different from any views now or hereafter expressed In thiS or any other Issue Delafield, Harvey, Tabelllnc, which IS registered With the SEC as an Investment adVISor, may give advice to Its investment adVISOry and other customers Independently of any statements made In thiS or In any other 1ssue Further Informallon on any secunty mentioned herein IS available on requesl /