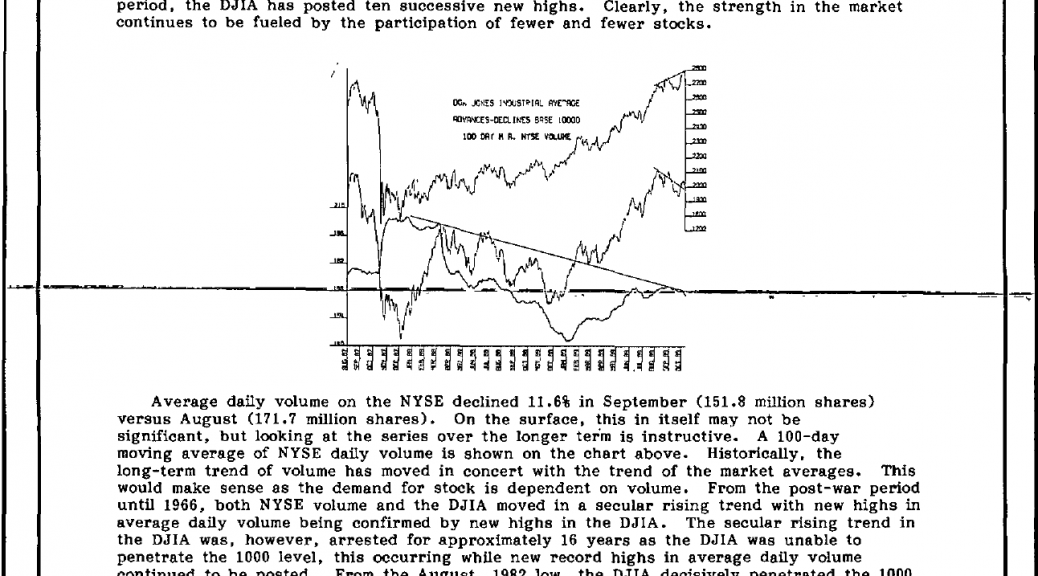 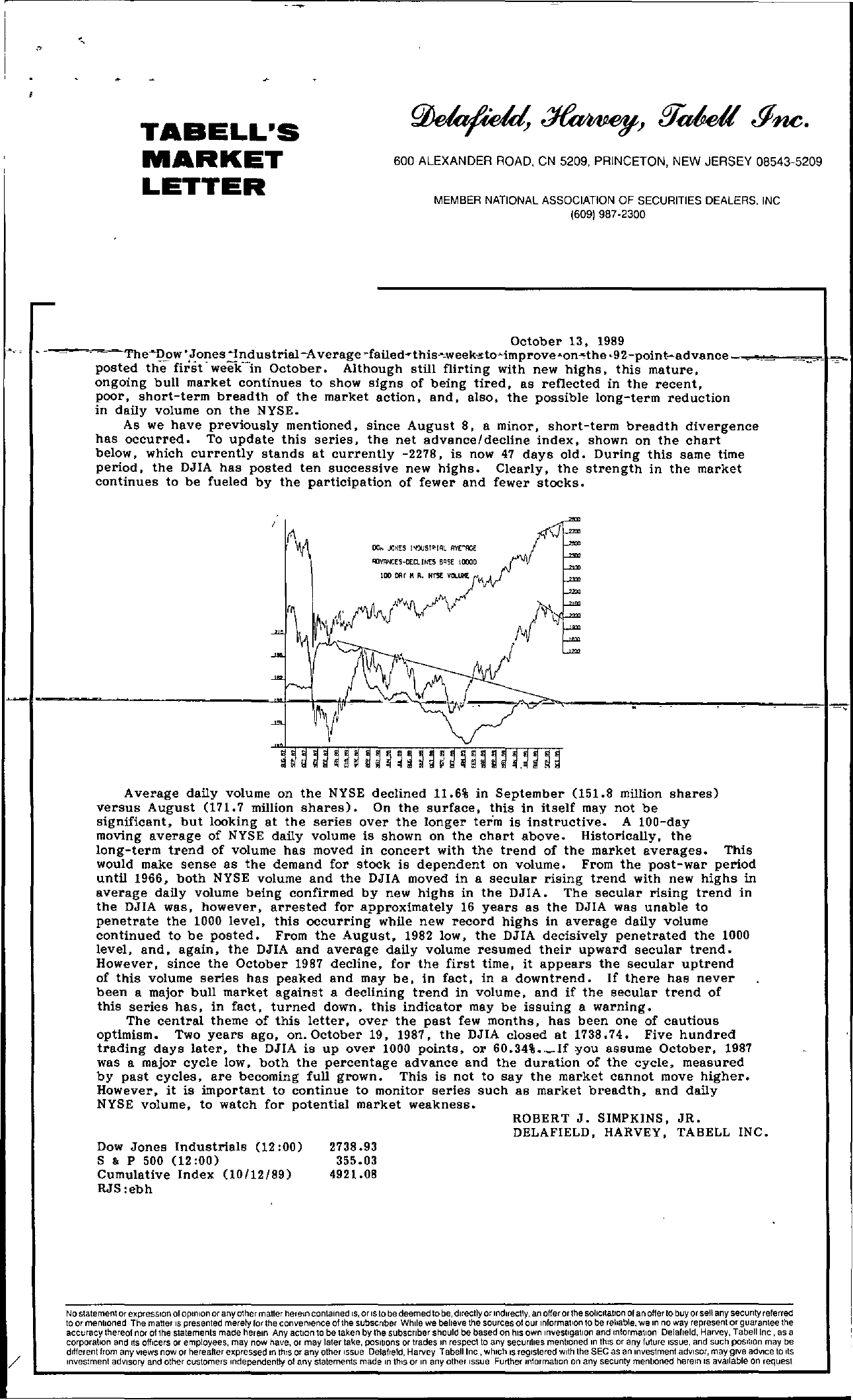 TABELL'S MARKET LETTER 600 ALEXANDER ROAD, CN 5209, PRINCETON, NEW JERSEY 08543-5209 MEMBER NATIONAL ASSOCIATION OF SECURITIES DEALERS, INC (6091 987-2300 October 13, 1989 –.-, TheJ)-w ',Jones.!,-,dustrial-Average -failedthis-week-!toimprove'onthe .9-point-advance ,,,,,'I.,….. posted the first week in October, Although still flirting with new highs, this mature, ongoing bull market continues to show signs of being tired, as reflected in the recent, poor, short-term breadth of the market action, and. also, the possible long-term reduction in daily volume on the NYSE. As we have previously mentioned, since August 8, a minor. short-term breadth divergence has occurred. To update this series. the net advance/decline index, shown on the chart below, which currently stands at currently -2278, is now 47 days old. During this same time period, the DJIA has posted ten successive new highs. Clearly, the strength in the market continues to be fueled by the participation of fewer and fewer stocks. Average daily volume on the NYSE declined 11.6 in September (151.8 million shares) versus August (171.7 million shares). On the surface, this in itself may not be significant, but looking at the series over the longer term is instructive. A 100-day moving average of NYSE daily volume is shown on the chart above. Historically, the long-term trend of volume has moved in concert with the trend of the market averages. This would make sense as the demand for stock is dependent on volume. From the post-war period until 1966, both NYSE volume and the DJIA moved in a secular rising trend with new highs in average daily volume being confirmed by new highs in the DJlA. The secular rising trend in the DJIA was, however, arrested for approximately 16 years as the DJlA was unable to penetrate the 1000 level, this occurring while new record highs in average daily volume continued to be posted. From the August, 1982 low, the DJIA decisively penetrated the 1000 level, and, again. the DJIA and average daily volume resumed their upward secular trend. However, since the October 1987 decline, for the first time, it appears the secular uptrend of this volume series has peaked and may be, in fact, in a downtrend. If there has never been a major bull market against a declining trend in volume, and if the secular trend of this series has, in fact, turned down this indicator may be issuing a warning. The central theme of this letter, over the past few months, has been one of cautious optimism. Two years ago, on. October 19, 1987, the DJIA closed at 1738.74. Five hundred trading days later, the DJIA is up over 1000 points, or 60.34.1f you assume October, 1987 was a major cycle low. both the percentage advance and the duration of the cycle measured by past cycles, are becoming full grown. This is not to say the market cannot move higher. However, it is important to continue to monitor series such a8 market breadth. and daily NYSE volume, to watCh for potential market weakness. ROBERT J. SIMPKINS, JR. DELAFIELD, HARVEY, TABELL INC. Dow Jones Industrials (12 00) 2738.93 S & P 500 (1200) 355.03 Cumulative Index (10112189) 4921.08 RJS ebh No statement or expressIon of opinion or any other matter hereIn contained IS, or IS to be deemed to be, directly or Indirectly, an offeror the SOlltltatlon of an offer to buy or sell any secUrity referred to or mentioned The matter IS presented merely for the convenIence of the subSCriber While we believe the sources of our InformatIOn to be reliable, we In no way represent or guarantee the accuracy thereof nor olthe statements made herein Any action to be taken by the subscriber should be based on hiS own investigation and informatIOn Delafield, Harvey, Tabelllnc, as a corporation and ItS officers or employees, may now have, or may later take, positions or trades In respect to any securities menboned In thiS or any future Issue, and such position may be different from any views now or hereafter expressed In thiS or any other Issue Delaheld, Harvey Tabelllnc, which IS registered With the SEC as an Investment adVisor, may give adVIce to Its / Investment adVISOry and other customers Independently of any statements made In thiS Of In any other Issue Further information on any security mentioned herem IS available on request