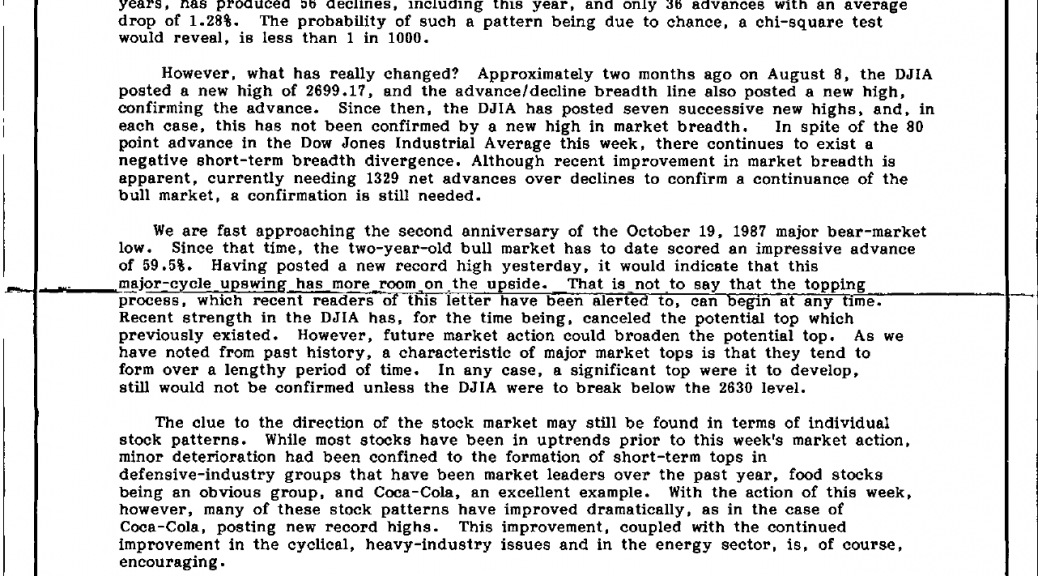 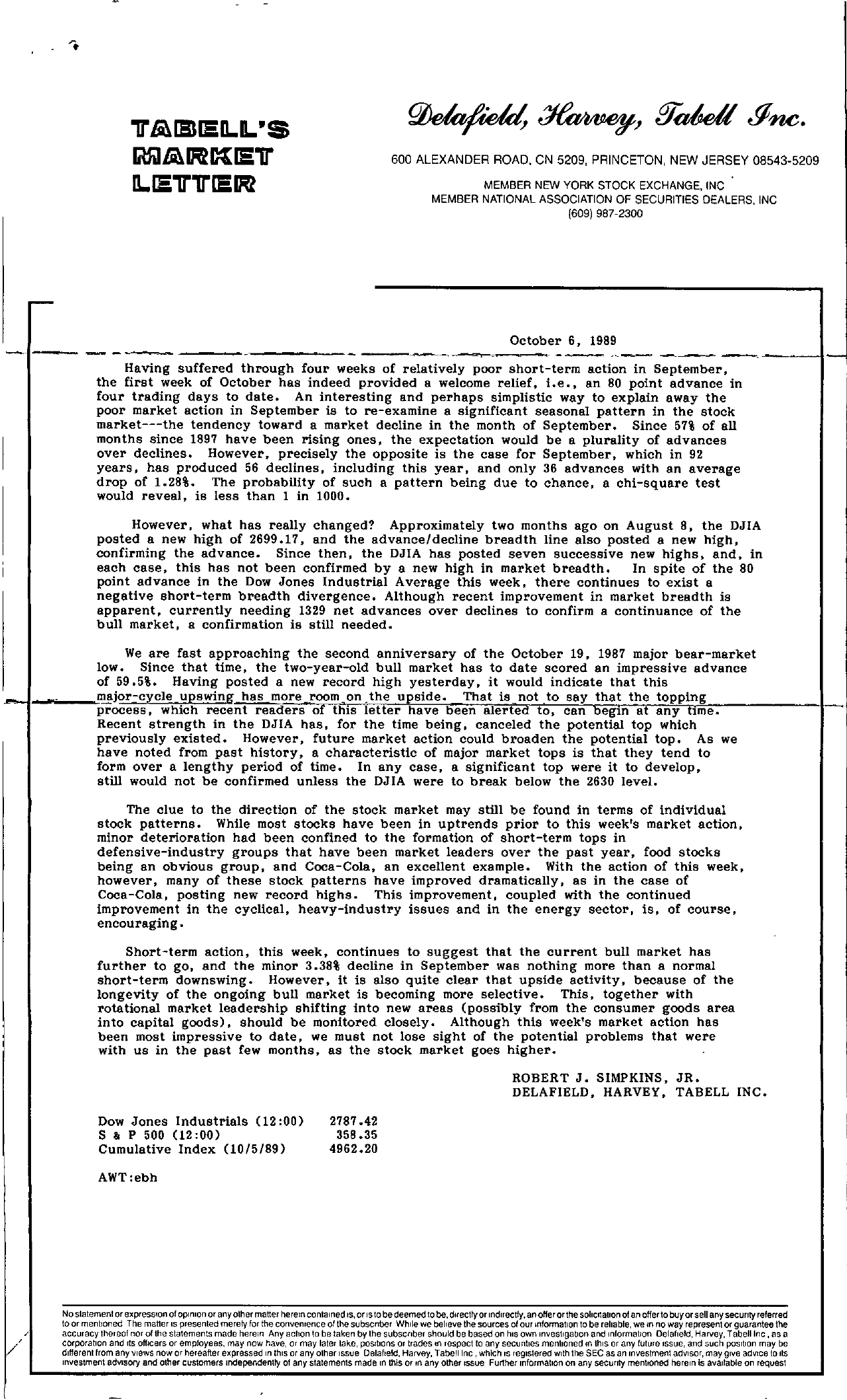 '1l'lIi.\ alE D.. D.. ' S IiUiJ lIi.\ IRi 1E'1l' D..1E'1l''1l'1E1Rl 600 ALEXANDER ROAD, CN 5209, PRINCETON, NEW JERSEY 08543-5209 MEMBER NEW YORK STOCK EXCHANGE, INC MEMBER NATIONAL ASSOCIATION OF SECURITIES DEALERS, INC 1609) 987-2300 – -I— — – — – – – – – – – – – – – – – -October6,1989 I—' Having suffered through four weeks of relatively poor short-term action in September, the first week of October has indeed provided a welcome relief, i.e., an 80 point advance in four trading days to date. An interesting and perhaps simplistic way to explain away the poor market action in September is to re-examine a significant seasonal pattern in the stock market—the tendency toward a market decline in the month of September. Since 57 of all months since 1897 have been rising ones, the expectation would be a plurality of advances over declines. However, precisely the opposite is the case for September, which in 92 years, has produced 56 declines, including this year, and only 36 advances with an average drop of 1.28. The probability of such a pattern being due to chance, a chi-square test would reveal, is less than 1 in 1000. However, what has really changed Approximately two months ago on August 8, the DJIA posted a new high of 2699.17, and the advance/decline breadth line also posted a new high, confirming the advance. Since then, the DJIA has posted seven successive new highs, and, in each case, this has not been confirmed by a new high in market breadth. In spite of the 80 point advance in the Dow Jones Industrial Average this week, there continues to exist a negative short-term breadth divergence. Although recent improvement in market breadth is apparent, currently needing 1329 net advances over declines to confirm a continuance of the bull market, a confirmation is still needed. We are fast approaching the second anniversary of the October 19, 1987 major bear-market low. Since that time, the two-year-old bull market has to date scored an impressive advance of 59.5. Having posted a new record high yesterday, it would indicate that this .-l…. ..m…,ajor-cycle upswing has more room on the upside. That is not to say that the toppinog-I process. which recent readers of this letter have been alerted to, can begIn at any time. – Recent strength in the DJIA has, for the time being, canceled the potential top which previously existed. However, future market action CQuld broaden the potential top As we have noted from past history, a characteristic of major market tops is that they tend to form over a lengthy period of time. In any case, a significant top were it to develop, still would not be confirmed unless the DJIA were to break below the 2630 level. The clue to the direction of the stock market may still be found in terms of individual stock patterns. While most stocks have been in uptrends prior to this week's market action, minor deterioration had been confined to the formation of short-term tops in defensive-industry groups that have been market leaders over the past year, food stocks being an obvious group, and Coca-Coia, an excellent example. With the action of this week, however, many of these stock patterns have improved dramatically, as in the case of Coca-Cola, posting new record highs This improvement, coupled with the continued improvement in the cyclical, heavy-industry issues and in the energy sector, is, of course, encouraging. Short-term action, this week, continues to suggest that the current bull market has further to go, and the minor 3.38 decline in September was nothing more than a normal short-term downswing. However, it is also quite clear that upside activity, because of the longevity of the ongoing bull market is becoming more selective. This, together with rotational market leadership shifting into new areas (possibly from the consumer goods area into capital goods), should be monitored closely. Although this week's market action has been most impressive to date, we must not lose sight of the potential problems that were with us in the past few months, as the stock market goes higher. ROBER T J. SIMPKINS, JR. DELAFIELD, HARVEY, TAB ELL INC. Dow Jones Industrials (12 00) S & P 500 (1200) Cumulative Index (10/5/89) 278742 358.35 4962.20 AWTebh No statement or expression of opinion or any other matter herein contained IS, or IS to be deemed to be, directly or indirectly, an offer or the solicllatron of an offer to buy or sell any secUrity referred to or menboned The matter IS presented merely for the convemence of the subscnber While we believe the sources of our Information to be reliable, we In no way represent or guarantee the accuracy thereof nor of the statements made herein Any aellon to be taken by the subscnber should be based on hiS own In\'estlgatlon and Informaton Delafield, Harvey, Tabelllnc, as a / corporation and rts officers or employees, may now ha\'e, or may later take, poslliOns or trades In respect to any secuntles mentioned In thiS or any future Issue, and such poSition may be different from any \'Iews now or hereafter expressed In thiS or any other Issue Delafield, Harvey, Tabelllnc, which IS registered With the SEC as an Investment adVIsor, maY9IVe adVIce to Its Investment adViSOry and other customers independently of any statements made In this or In any other Issue Further Informallon on any security menboned herein Is available on request