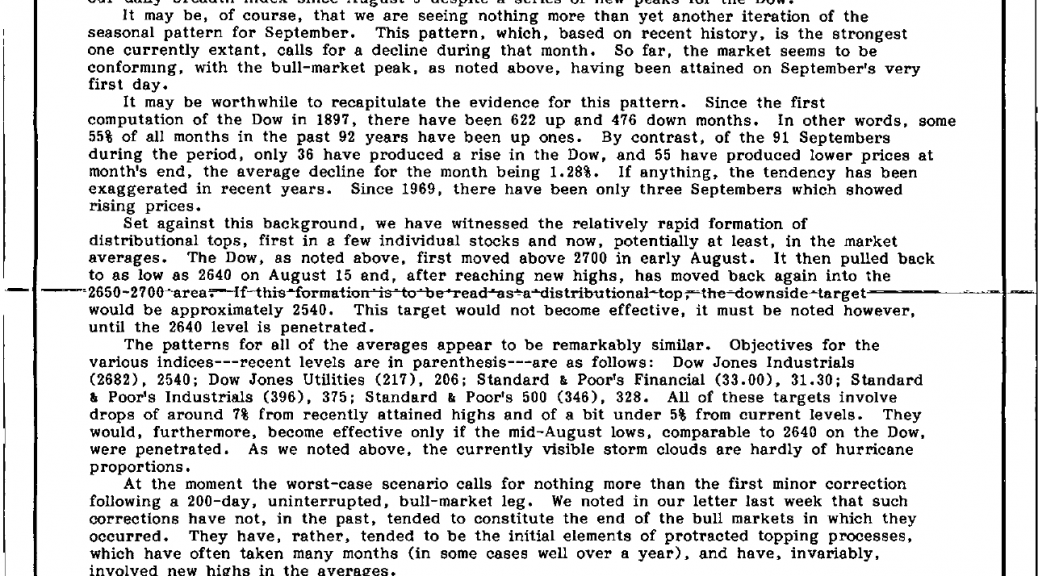 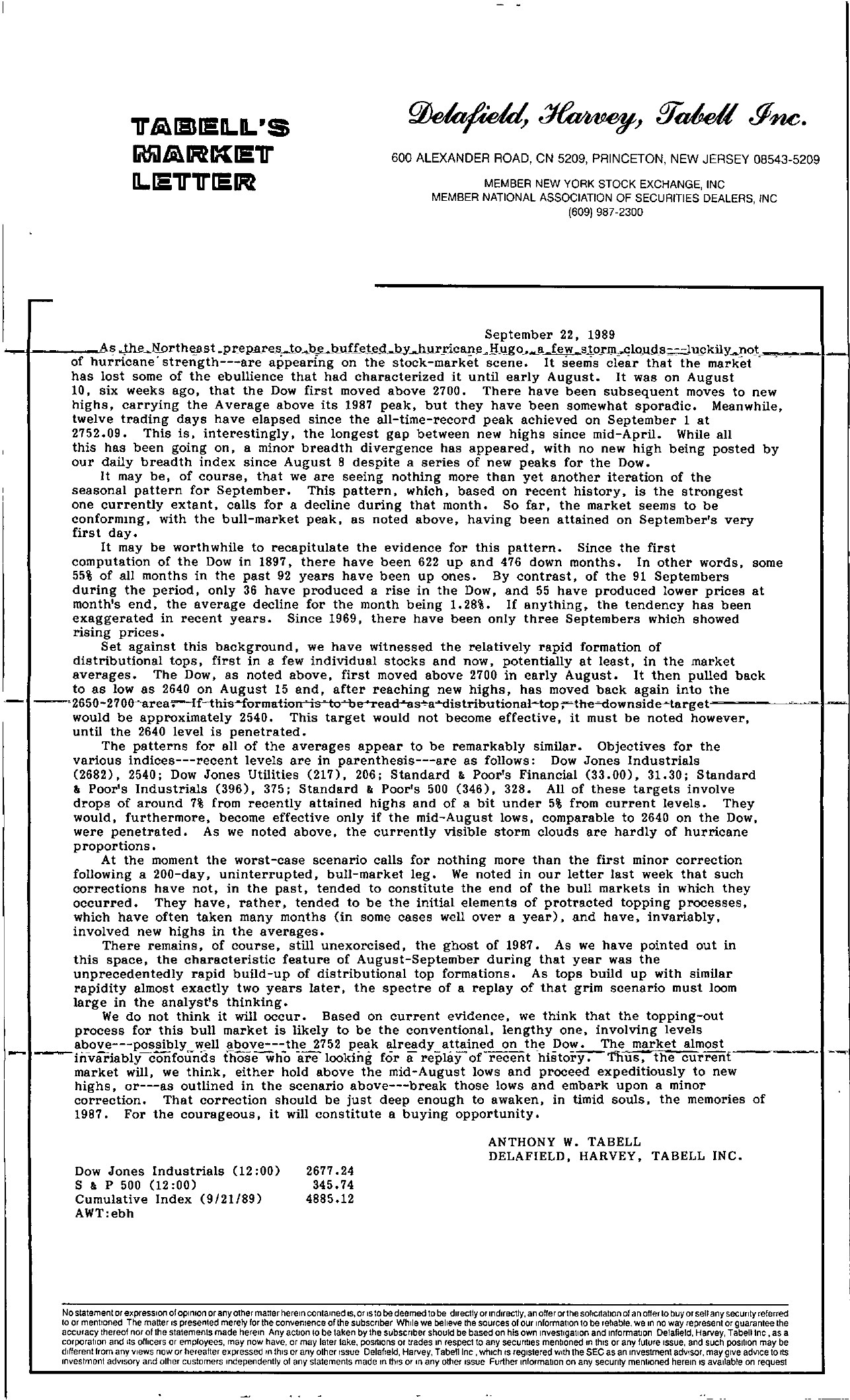 T J.ii.\1mIEn.n.'S J.ii.\ R IlllET n.lETTIER 600 ALEXANDER ROAD, CN 5209, PRINCETON, NEW JERSEY 08543-5209 MEMBER NEW YORK STOCK EXCHANGE, INC MEMBER NATIONAL ASSOCIATION OF SECURITIES DEALERS, INC (609) 987-2300 – September 22, 1989 -f —As .pwl'lDrth'l8sCp,.epres,-iobe buJLeted byh-lr-,1al1e,JI-,!go,a few s.10rllL.ql.o,uds-lu9kilyno,t,….,..,.., of hurricane'strength—are appearing on the stock-market scene. It seems clear that the market – has lost some of the ebullience that had characterized it until early August. It was on August 10, six weeks ago, that the Dow first moved above 2700. There have been subsequent moves to new highs, carrying the Average above its 1987 peak, but they have been somewhat sporadic. Meanwhile, twelve trading days have elapsed since the all-time-record peak achieved on September 1 at 2752.09. This is, interestingly, the longest gap between new highs since mid-April While all this has been going on, a minor breadth divergence has appeared, with no new high being posted by our daily breadth index since August 8 despite a series of new peaks for the Dow. It may be, of course, that we are seeing nothing more than yet another iteration of the seasonal pattern for September. This pattern, which, based on recent history, is the strongest one currently extant, calls for a decline during that month. So far, the market seems to be conformlng. with the bull-market peak. as noted above. having been attained on September's very first day. It may be worthwhile to recapitulate the evidence for this pattern. Since the first computation of the Dow in 1897, there have been 622 up and 476 down months. In other words, some 55 of all months in the past 92 years have been up ones By contrast, of the 91 Septembers during the period, only 36 have produced a rise in the Dow, and 55 have produced lower prices at month's end, the average decline for the month being 1.28. If anything, the tendency has been exaggerated in recent years. Since 1969, there have been only three Septembers which showed rising prices. Set against this background. we have witnessed the relatively rapid formation of distributional tops, first in a few individual stocks and now, potentially at least, in the market averages. The Dow, as noted above, first moved above 2700 in early August. It then pulled back to as low as 2640 on August 15 and, after reaching new highs, has moved back again into the –'2650-2700area.-If–thisformatiorr–is-to4eeadsa'-distributional-top.theownside—target.—-…- would be approximately 2540. This target would not become effective, it must be noted however, until the 2640 level is penetrated. The patterns for all of the averages appear to be remarkably similar. Objectives for the various indices—recent levels are in parenthesis—are as follows Dow Jones Industrials (2682), 2540; Dow Jones Utilities (217), 206; Standard & Poor's Financial (33.00), 31.30; Standard & Poor's Industrials (396), 375; Standard & Poor's 500 (346), 328. All of these targets involve drops of around 7 from recently attained highs and of a bit under 5 from current levels. They would, furthermore, become effective only if the mid-August lows, comparable to 2640 on the Dow, were penetrated. As we noted above, the currently visible storm clouds are hardly of hurricane proportions. At the moment the worst-case scenario calls for nothing more than the first minor correction following a 200-day, uninterrupted, bull-market leg. We noted in our letter last week that such corrections have not, in the past, tended to constitute the end of the bull markets in which they occurred. They have, rather, tended to be the initial elements of protracted topping processes, which have often taken many months (in some cases well over a year), and have, invariably, involved new highs in the averages. There remains, of course, still unexorcised, the ghost of 1987. As we have pointed out in this space, the characteristic feature of August-September during that year was the unprecedentedly rapid build-up of distributional top formations. As tops build up with similar rapidity almost exactly two years later, the spectre of a replay of that grim scenario must loom large in the analyst's thinking. We do not think it will occur. Based on current evidence, we think that the topping-out process for this bull market is likely to be the conventional, lengthy one, involving levels areabove—possibly well above—the -iit-variably-corifounds thosewho 2752 peak already attained on the Dow. The market looking for it rephiyoCrecent historY-Thus, the almost cur-r e nt— – – – – I – – market will, we think, either hold above the mid-August lows and proceed expeditiously to new highs, or—as outlined in the scenario above—break those lows and embark upon a minor correction. That correction should be just deep enough to awaken, in timid souls. the memories of 1987. For the courageous, it will constitute a buying opportunity. Dow Jones Industrials (I2 00) S & P 500 (1200) Cumulative Index (9/21/89) AWTebh 2677.24 345.74 4885.12 ANTHONY W. TABELL DELAFIELD, HARVEY, TABELL INC. No statement or expression of opinIOn or any other matter herein contained IS, or IS to be deemed to be directly or Indirectly, an offer or the solicitation of an offer to buy or sell any secUrity referred 10 or mentioned The matter IS presented merely for the convenience of the subSCriber While we beheve the sources of our information to be reliable, we In no way represent Of guarantee the accuracy thereof nor of the statements made herein Any action 10 be taken by the subscriber should be based on his own Invesllgatlon and Information Delafield, Harvey, Tabell tnc, as a corporation and Its officers or emptoyees, may now have, or may later take, positions or trades In respect to any securities mentioned In thiS or any future Issue, and such poslbon may be different from any views now or hereafter expressed In thiS or any other Issue Delafield, Harvey, Tabell Inc, which IS registered With the SEC as an Investment adVisor, may give adVice to Its Investment adVISOry and other customers Independenlly of any statements made In thiS or In any other Issue Further information on any security mentIOned herein IS available on request