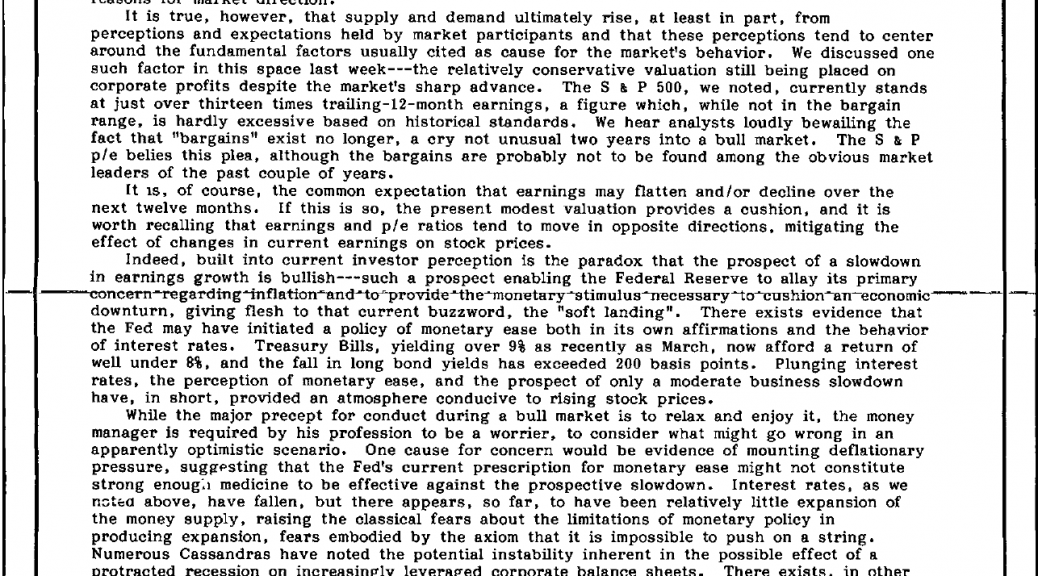 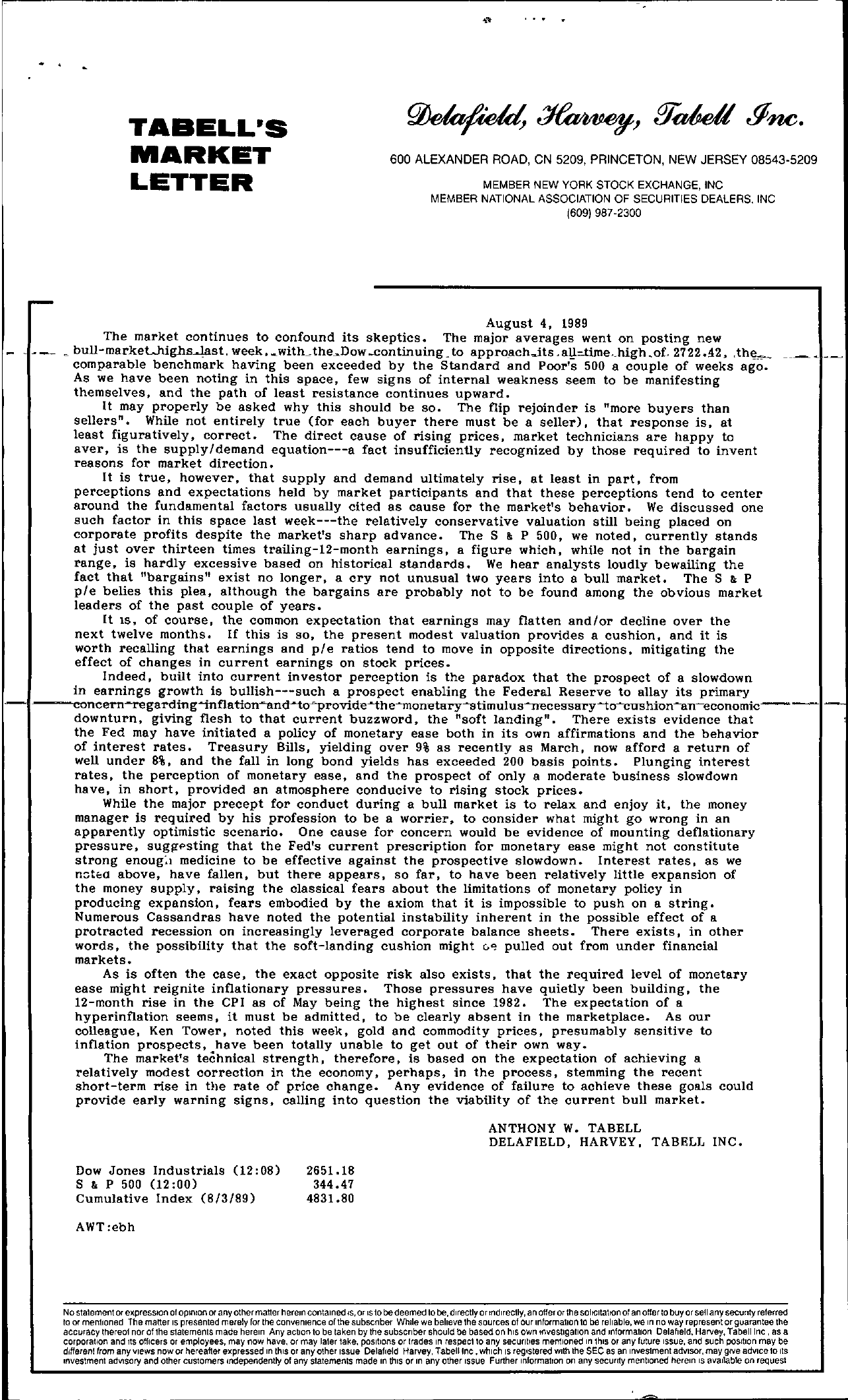 ,. TABELL'S MARKET LETTER 600 ALEXANDER ROAD, CN 5209, PRINCETON, NEW JERSEY 08543-5209 MEMBER NEW YORK STOCK EXCHANGE, INC MEMBER NATIONAL ASSOCIATION OF SECURITIES DEALERS. INC 1609) 987-2300 August 4, 1989 The market continues to confound its skeptics. The major averages went on posting new bull-markeLhighs..last. week,withtheDowcontinuingto approachitsatime,highof. 2722.42, .the comparable benchmark having been exceeded by the Standard and Poor's 500 a couple of weeks ago. As we have been noting in this space, few signs of internal weakness seem to be manifesting themselves, and the path of least resistance continues upward. It may properly be asked why this should be so. The flip rejoinder is more buyers than sellers. While not entirely true (for each buyer there must be a seller), that response is, at least figuratively, correct. The direct cause of rising prices. market technicians are happy to aver, is the supply/demand equation—a fact insufficiently recognized by those required to invent reasons for market direction. It is true, however, that supply and demand Ultimately rise, at least in part, from perceptions and expectations held by market participants and that these perceptions tend to center around the fundamental factors usually cited as cause for the market's behavior. We discussed one such factor in this space last week—the relatively conservative valuation still being placed on corporate profits despite the market's sharp advance. The S III P 500, we noted, currently stands at just over thirteen times trailing-12-month earnings, a figure whiCh, while not in the bargain range, is hardly excessive based on historical standards. We hear analysts loudly bewailing the fact that bargains exist no longer. a cry not unusual two years into a bull market. The S & P pie belies this plea, although the bargains are probably not to be found among the obvious market leaders of the past couple of years. It IS. of course, the common expectation that earnings may flatten andlor decline over the next twelve months. If this is so. the present modest valuation provides a cushion, and it is worth recalling that earnings and pIe ratios tend to move in opposite directions, mitigating the effect of changes in current earnings on stock prices. Indeed, built into current investor perception is the paradox that the prospect of a slowdown in earnings growth is buIlish—such a prospect enabling the Federal Reserve to allay its primary – – —-concern—rega-rding.,nflationand—-to—pTovide—the–monetaTystimuiusnecessarytocushionan-economic— downturn. giving flesh to that current buzzword, the soft landing. There exists evidence that the Fed may have initiated a policy of monetary ease both in its own affirmations and the behavior of interest rates. Treasury Bills. yielding over 9 as recently as March, now afford a return of well under 8. and the fall in long bond yields has exceeded 200 basis points. Plunging interest rates. the perception of monetary ease, and the prospect of only a moderate business slowdown have, in short, provided an atmosphere conducive to rising stock prices. While the major precept for conduct during a bull market is to relax and enjoy it, the money manager is required by his profession to be a worrier, to consider what might go wrong in an apparently optimistic scenario. One cause for concern would be evidence of mounting deflationary pressure. sugJ!f'sting that the Fed's current prescription for monetary ease might not constitute strong enougl medicine to be effective against the prospective slowdown. Interest rates, as we n;tbO above, have fallen, but there appears. so far, to have been relatively little expansion of the money supply, raising the classical fears about the limitations of monetary policy in producing expansion, fears embodied by the axiom that it is impossible to push on a string. Numerous Cassandras have noted the potential instability inherent in the possible effect of a protracted recession on increasingly leveraged corporate balance sheets. There exists. in other words, the possibility that the soft-landing cushion might ,, pulled out from under financial markets. As is often the case, the exact opposite risk also exists, that the required level of monetary ease might reignite inflationary pressures. Those pressures have quietly been building. the l2-month rise in the CPI as of May being the highest since 1982. The expectation of a hyperinflation seems, it must be admitted, to be clearly absent in the marketplace. As our colleague, Ken Tower, noted this week, gold and commodity prices, presumably sensitive to inflation prospects, have been totally unable to get out of their own way. The market's technical strength, therefore, is based on the expectation of achieving a relatively modest correction in the economy, perhaps, in the process, stemming the recent short-term rise in the rate of price change. Any evidence of failure to achieve these goals could provide early warning signs, caIling into question the viability of the current bull market. ANTHONY W. TABELL DELAFIELD, HARVEY, TABELL INC. Dow Jones Industrials (1208) S & P 500 (1200) Cumulative Index (8/3/89) 2651.18 344.47 4831.80 AWTebh No statement or expression of opinion or any other matter herein contained IS, or IS to be deemed 10 be, directly or Indirectly, an offer or the solICitatIOn of an offer to buy or sell any secUrity referred to or mentioned The matter IS presented merely for the convenience of the subSCriber While we beheve the sources of our InformatIOn to be rehable, we In no way represent or guarantee the accuracy thereof nor of the statements made herein Any action to be taken by Ihe subSCriber should be based on hiS own trwestlgatlon and information Delafield, Harvey, Tabellinc , as a corporation and Its officers or employees, may now have, or may laler lake, posilions or trades In respect to any securliles mentioned In thiS or any future Issue, and such poSItIOn may be dlHerenl from any views now or hereafter expressed In thiS or any other Issue Delaheld Harvey, Tabell Inc, which IS regIstered With the SEC as an Investment advisor, may gIVe adVice 10 ItS Investment adVISOry and olher customers mdependently of any statements made In thiS or In any other Issue Further informatIon on any security mentIOned herein IS available on request