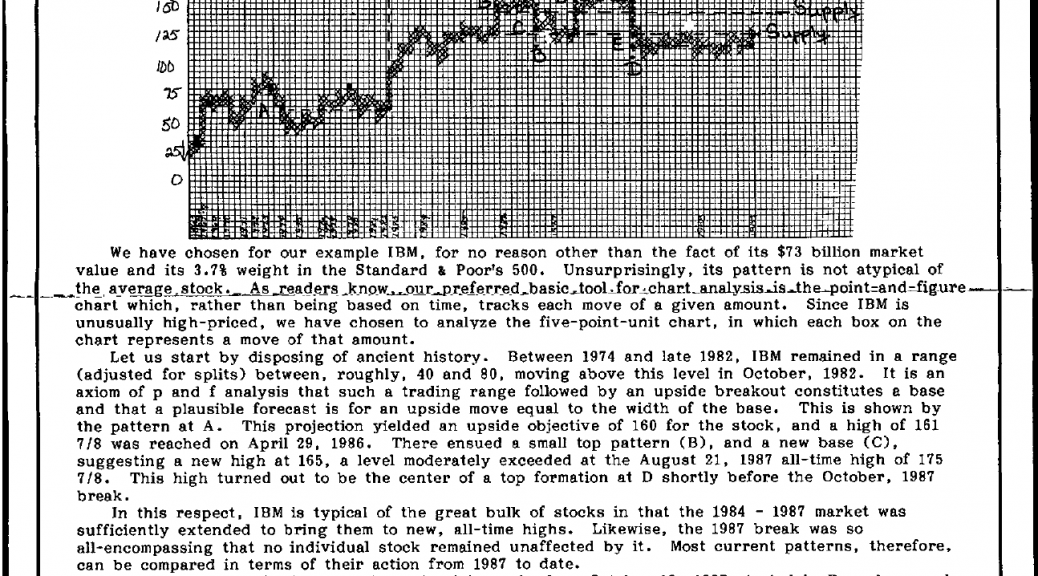 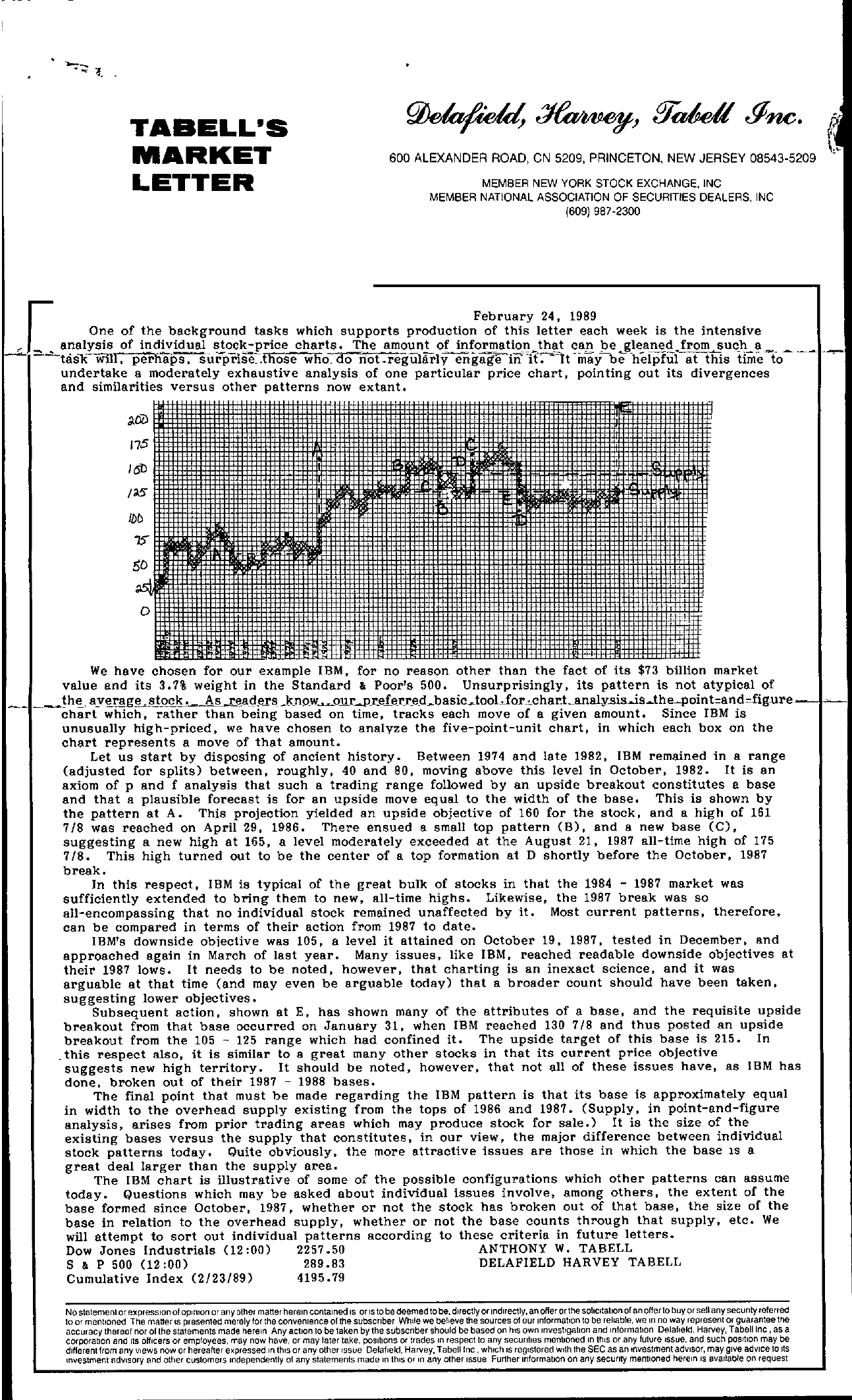 TABELL'S MARKET LETTER t 600 ALEXANDER ROAD, CN 5209, PRINCETON, NEW JERSEY 08543-5209 \ MEMBER NEW YORK STOCK EXCHANGE. INC MEMBER NATIONAL ASSOCIATION OF SECURITIES DEALERS. INC (609) 987-2300 February 24, 1989 r One of the background tasks which supports production of this letter each week is the intensive analysis of individual stock-price charts. The amount of information that can be gleaned from such a tIme- – –'–task wIll, periiips-surpMse .those who do riot-regulArly engalWiiiCtt–,clt -inaybe yelpfiJi-.tfhls to- – '-.- undertake a moderately exhaustive analysis of one particular price chart, pointing out its divergences and similarities versus other patterns now extant. J,6lJ 16fJ I IDb 15 o We have chosen for our example IBM, for no reason other than the fact of its 73 billion market value and its 3.7 weight in the Standard & Poor's 500. Un surprisingly , its pattern is not atypical of thE!, ayerage stock. As reaI.es J\Cn9w0J,ir-prelerredbasictoolfor-'.charLanalysis-.i.stheointanddlgul'e chart which, rather than being based on time, tracks each move of a given amount. Since IBM is unusually high-priced, we have chosen to analyze the five-paint-unit chart, in which each box on the chart represents a move of that amount. Let us start by disposing of ancient history. Between 1974 and late 1982, IBM remained in a range (adjusted for splits) between, roughly, 40 and 80, moving above this level in October, 1982 It is an axiom of p and f analysis that such a trading range followed by an upside breakout constitutes a base and that a plausible forecast is for an upside move equal to the width of the base. This is shown by the pattern at A This projection yielded an upside objective of 160 for the stock, and a high of 161 7/8 was reached on April 29, 1986. There ensued a small top pattern (B), and a new base (C), suggesting a new high at 165, a level moderately exceeded at the August 21. 1987 all-time high of 175 7/8. This high turned out to be the center of a top formation at D shortly before the October, 1987 break. In this respect, IBM is typical of the great bulk of stocks in that the 1984 – 1987 market was sufficiently extended to bring them to new, all-time highs. Likewise, the 1987 break was so all-encompassing that no individual stock remained unaffected by it. Most current patterns, therefore. can be compared in terms of their action from 1987 to date. IBM's downside objective was 105, a level it attained on October 19, 1987, tested in December, and approached again in March of last year. Many issues, like IBM, reached readable downside objectives at their 1987 lows. It needs to be noted. however, that charting is an inexact science. and it was arguable at that time (and may even be arguable today) that a broader count should have been taken, suggesting lower objectives. Subsequent action. shown at E. has shown many of the attributes of a base. and the requisite upside breakout from that base occurred on January 31, when IBM reached 130 7/8 and thus posted an upside breakout from the 105 – 125 range which had confined it. The upside target of this base is 215. In this respect also. it is similar to a great many other stocks in that its current price objective suggests new high territory. It should be noted, however, that not all of these issues have, as IBM has done, broken out of their 1987 – 1988 bases. The final point that must be made regarding the IBM pattern is that its base is approximately equal in width to the overhead supply existing from the tops of 1986 and 1987. (Supply, in point-and-figure analysis, arises from prior trading areas which may produce stock for sale.) It is the size of the existing bases versus the supply that constitutes, in our view, the major difference between individual stock patterns today. Quite Obviously, the more attractive issues are those in which the base IS a great deal larger than the supply area. The IBM chart is illustrative of some of the possible configurations which other patterns can assume today. Questions which may be asked about individual issues involve, among others. the extent of the base formed since October, 1987, whether or not the stock has broken out of that base, the size of the base in relation to the overhead supply, whether or not the base counts through that supply, etc. We will attempt to sort out individual patterns according to these criteria in future letters. Dow Jones Industrials 0200) 2257.50 ANTHONY W. TABELL S & P 500 (12 00) 289.83 DELAFIELD HARVEY TABELL Cumulative Index (2/23/89) 4195.79 No slatement or expression of opInion or any other matter herein contained IS or IS to be deemed to be, directly or Indirectly, an offer or the soilcltatlon of an offer to buy or sell any secUrity referred to or mentioned The matter IS presented merely for Ihe convenience of the subscriber While we believe the sources of our Informal1On to be reliable, we In no way represent or guarantee the accuracy thereof nor of the statements made herein Any action to be taken by the subscnber should be based on hiS own investigation and Informal1On Delafield, Harvey, Tabelilnc , as a corporation and ItS officers or employees, may now have, or may tater take, positions or trades In respect to any securities mentioned In thiS or any future Issue, and such pOSition may be different from any views now or hereafter e)lpressed In thiS or any other Issue Delafield, HalVey, Tabelilnc, which IS registered With the SEC as an Investment advisor, may give adVice to ItS Investment adVISOry and other customers II'Idependently of any statements made In thiS or 11'1 any other Issue Further Information on any secunty mentioned herell'l IS available on request