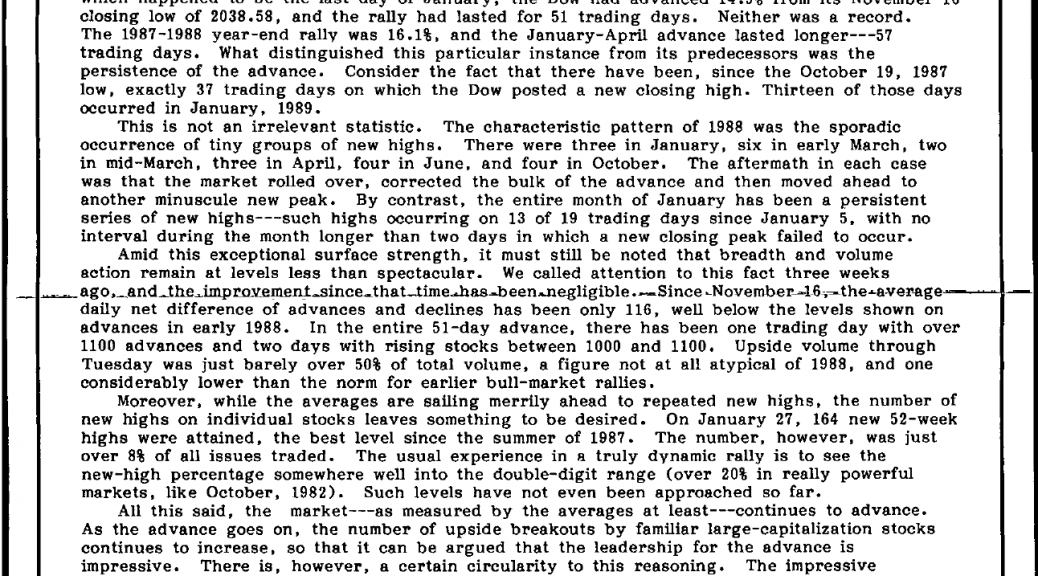 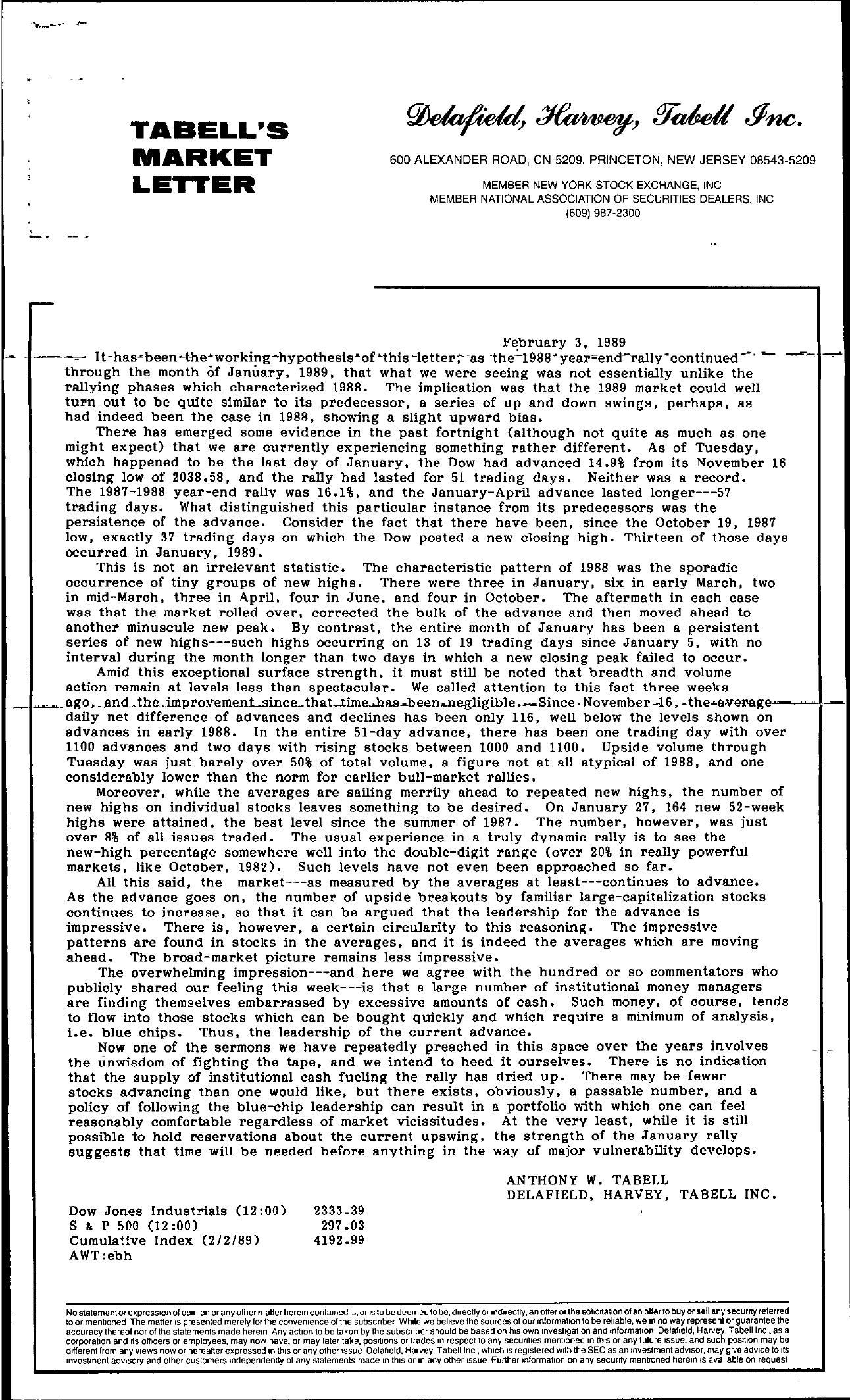 TABELL'S MARKET LETTER 600 ALEXANDER ROAD, CN 5209. PRINCETON. NEW JERSEY 08543-5209 MEMBER NEW YORK STOCK EXCHANGE, INC MEMBER NATIONAL ASSOCIATION OF SECURITIES DEALERS. INC (609) 987-2300 February 3, 1989 – – – – – It,has'beentheworking-hypothesis'ofthis Ietter;–as -the-'-1988'yearend-rally'continued -. – – . through the month Of January, 1989, that what we were seeing was not essentially unlike the rallying phases which characterized 1988. The implication was that the 1989 market could well turn out to be quite similar to its predecessor, a series of up and down swings, perhaps, as had indeed been the case in 1988, showing a slight upward bias. There has emerged some evidence in the past fortnight (although not quite as much as one might expect) that we are currently experiencing something rather different. As of Tuesday, which happened to be the last day of January, the Dow had advanced 14.9 from its November 16 closing low of 2038.58, and the rally had lasted for 51 trading days. Neither was a record. The 1987-1988 year-end rally was 16.1, and the January-April advance lasted longer—57 trading days. What distinguished this particular instance from its predecessors was the persistence of the advance. Consider the fact that there have been, since the October 19, 1987 low, exactly 37 trading days on which the Dow posted a new closing high. Thirteen of those days occurred in January, 1989. This is not an irrelevant statistic. The characteristic pattern of 1988 was the sporadic occurrence of tiny groups of new highs. There were three in January, six in early March, two in mid-March, three in April, four in June, and four in October. The aftermath in each case was that the market rolled over, corrected the bulk of the advance and then moved ahead to another minuscule new peak. By contrast, the entire month of January has been a persistent series of new highs—such highs occurring on 13 of 19 trading days since January 5, with no interval during the month longer than two days in which a new closing peak failed to occur. Amid this exceptional surface strength, it must still be noted that breadth and volume action remain at levels less than spectacular. We called attention to this fact three weeks 1ago.andjheimpr'nremenlsincethaLtime..hasbeennegligible.SinceNovember16,theaver-age daily net difference of advances and declines has been only 116, well below the levels shown on advances in early 1988. In the entire 51-day advance, there has been one trading day with over 1100 advances and two days with rising stocks between 1000 and 1100. Upside volume through Tuesday was just barely over 50 of total volume. a figure not at all atypical of 1988, and one considerably lower than the norm for earlier bull-market rallies. Moreover, while the averages are sailing merrily ahead to repeated new highs, the number of new highs on individual stocks leaves something to be desired. On January 27, 164 new 52-week highs were attained, the best level since the summer of 1987. The number, however, was just over 8 of all issues traded. The usual experience in Ii truly dynamic rally is to see the new-high percentage somewhere well into the double-digit range (over 20 in really powerful markets, like October, 1982). Such levels have not even been approached so far. All this said, the market—as measured by the averages at least—continues to advance. As the advance goes on, the number of upside breakouts by familiar large-capitalization stocks continues to increase, so that it can be argued that the leadership for the advance is impressive. There is, however, a certain circularity to this reasoning. The impressive patterns are found in stocks in the averages, and it is indeed the averages which are moving ahead. The broad-market picture remains less impressive. The overwhelming impression—and here we agree with the hundred or so commentators who publicly shared our feeling this week—is that a large number of institutional money managers are finding themselves embarrassed by excessive amounts of cash. Such money, of course, tends to flow into those stocks which can be bought quickly and which require a minimum of analysis, i.e. blue chips. Thus, the leadership of the current advance. Now one of the sermons we have repeatedly preached in this space over the years involves the unwisdom of fighting the tape, and we intend to heed it ourselves. There is no indication that the supply of institutional cash fueling the rally has dried up. There may be fewer stocks advancing than one would like, but there exists, obviously, a passable number, and a policy of following the blue-chip leadership can result in a portfolio with which one can feel reasonably comfortable regardless of market vicissitudes. At the very least, while it is still possible to hold reservations about the current upswing, the strength of the January rally suggests that time will be needed before anything in the way of major vulnerability develops. Dow Jones Industrials (12 00) S P 500 (1200) Cumulative Index (2/2189) AWTebh 2333.39 297.03 4192.99 ANTHONY W. TABELL DELAFIELD, HARVEY, TABELL INC. No statement or expressIOn of opinion or any other matter herein contained IS, or IS to be deemed to be, directly or mdlfeclly, an offer or the solicrtatlon of an offerlo buy or sen any security referred to or mentioned The mat1er IS presented merely for the convenience of the subsCriber While we beheve the sources 01 OUt Information to be reliabte, we m no way represent or guarantee the accuracy thereof nor 01 the statements made herein Any action to be taken by the subSCriber should be based on hiS own Investigation and Information Delafield, Harvey, Tabell Inc , as a corporation and Its officers or employees, may now have, or may later take, positions or trades m respect to any securities mentioned In this or any luture Issue, and such poS!\IOfl may be different from any views now or hereafter expressed In thiS or any other Issue Oelafleld, Harvey, Tahelllnc, which IS registered Wlththe SEC as an Investment adVisor, may gIVe adVice to ItS Investment adVISOry and other customers mdependently of any statements made In thiS or In any other Issue Further information on any securrty mentioned herein IS available on request