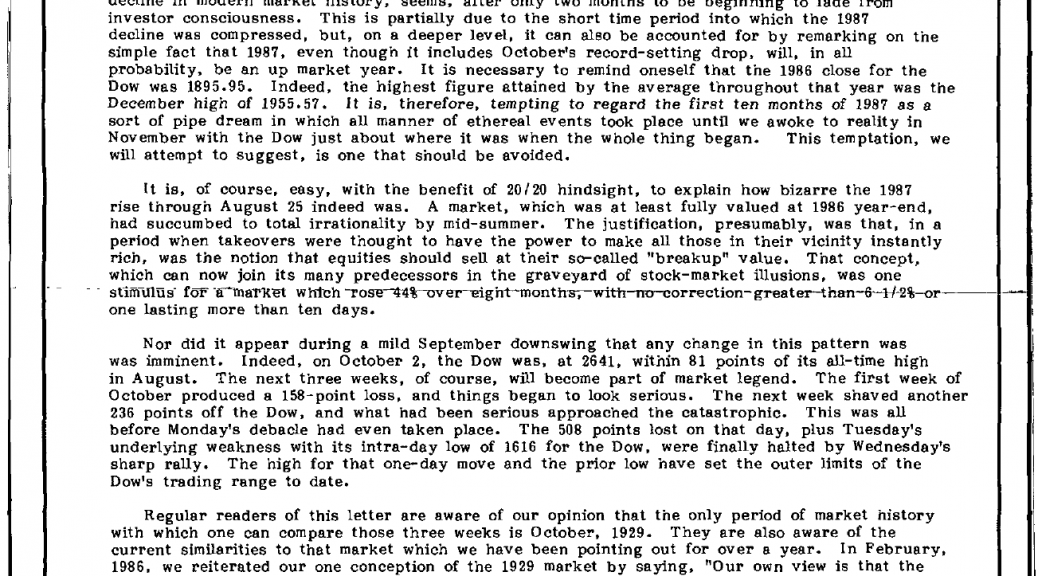 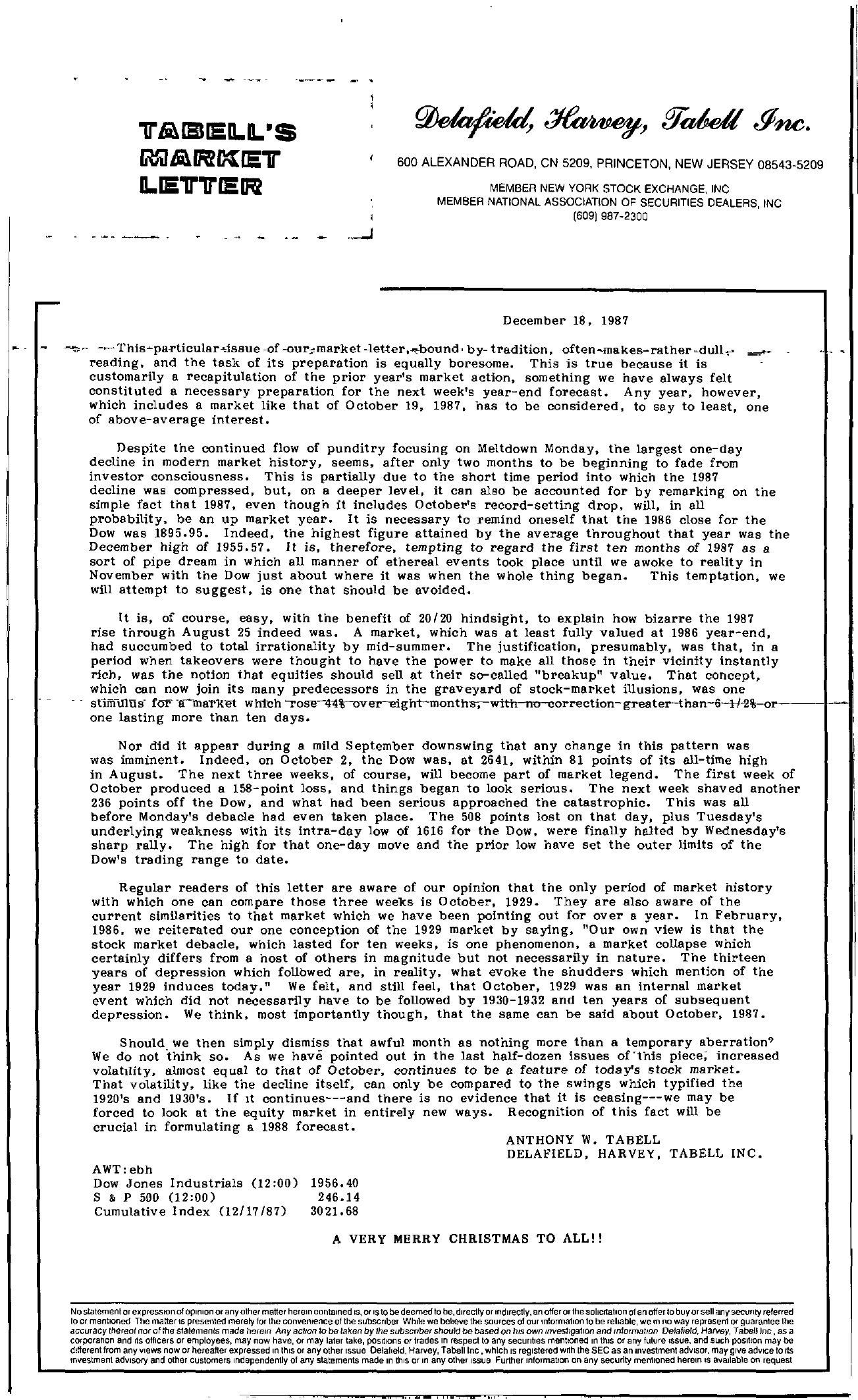 'U'& \ ( ! U E L L ' S &lRD'tIE'U' LIE'U''U'IER 600 ALEXANDER ROAD, CN 5209, PRINCETON, NEW JERSEY 08543-5209 MEMBER NEW YORK STOCK EXCHANGE, INC MEMBER NATIONAL ASSOCIATION OF SECURITIES DEALERS, INC (6091 987-2300 December 18, 1987 — -This…. pa-rticular-'.issue -of -our;'.mar-ket letter,-!-bound, by- tradition, often-rnakes-ratherdull,! reading, and the task of its preparation is equally boresome. This is true because it is customarily a recapitulation of the prior year's market action, something we have always felt constituted a necessary preparation for the next week's year-end forecast. Any year. however, which includes a market like that of October 19, 1987, has to be considered, to say to least, one of above-average interest. Despite the continued flow of punditry focusing on Meltdown Monday, the largest one-day decline in modern market history. seems, after only two months to be beginning to fade from investor consciousness. This is partially due to the short time period into Which the 1987 decline was compressed, but, on a deeper level, it can also be accounted for by remarking on the simple fact that 1987. even though it includes October's record-setting drop. will, in all probability, be an up market year. It is necessary to remind oneself that the 1986 close for the Dow was 1895.95. Indeed, the highest figure attained by the average throughout that year was the December high of 1955.57. It is, therefore, tempting to regard the first ten months of 1987 8S 8 sort of pipe dream in Which all manner of ethereal events took place until we awoke to reality in November with the Dow just about where it was when the whole thing began. This temptation, we will attempt to suggest, is one that should be avoided. It is, of course, easy, with the benefit of 20/20 hindsight, to explain how bizarre the 1987 rise through August 25 indeed was. A market, which was at least fully valued at 1986 year-end, had succumbed to total irrationality by mid-summer. The justification, presumably, was that, in a period when takeovers were thought to have the power to make all those in their vicinity instantly rich, was the notion that equities should sen at their so-called breakup value. That concept, which can now join its many predecessors in the graveyard of stock-market illusions, was one sriffn.nUs for -e.-ma-r1et which -rose–over-ei.ghtmontho;–with-no-correction-greater-than-6–l-l-2-or—-I one lasting more thsn ten days. Nor did it appear during a mild September downswing that any change in this pattern was was imminent. Indeed, on October 2, the Dow was, at 2641. within 81 points of its all-time high in August. The next three weeks, of course, will become part of market legend. The first week of October produced a 158-point loss, and things began to lOOk serious. The next week shaved another 236 points off the Dow, and what had been serious approached the catastrophic. This was all before Monday's debacle had even taken place. The 508 points lost on that day, plus Tuesday's underlying weakness with its intra-day low of 1616 for the Dow, were finally halted by Wednesday's sharp rally. The high for that one-day move and the prior low have set the outer limits of the Dow's trading range to date. Regular readers of this letter are aware of our opmlOn that the only period of market history with which one can compare those three weeks is October. 1929. They are also aware of the current similarities to that market which we have been pointing out for over a year. In February, 1986. we reiterated our one conception of the 1929 market by saying, nOur own view is that the stock market debacle, which lasted for ten weeks, is one phenomenon. a market collapse Which certainly differs from a host of others in magnitude but not necessarily in nature. The thirteen years of depression which foUbwed are, in reality. what evoke the shudders which mention of the year 1929 induces today. We felt, and still feel, that October, 1929 was an internal market event which did not necessarily have to be followed by 1930-1932 and ten years of subsequent depression. We think. most importantly though, that the same can be said about October, 1987. Should we then simply dismiss that awful month as nothing more than a temporary aberration We do not think so. As we have pointed out in the last half-dozen issues of ' this piece; increased volatIlity. almost equal to that of October, continues to be a feature of today's stock market. That volatility, like the decline itself, can only be compared to the swings Which typified the 1920 's and 1930's. If 1t continues—and there is no evidence that it is ceasing—we may be forced to look at the equity market in entirely new ways. Recognition of this fact will be crucial in formulating a 1988 forecast. ANTHONY W. TABELL DELAFIELD, HARVEY, TABELL INC. AWTebh Dow Jones Industrials (1200) 1956.40 S & P 500 (1200) 246.14 Cumulative Index (12/17/87) 3021.68 A VERY MERRY CHRISTMAS TO ALL!! No statement or e)(presslon of Opinion or any other matter herein contained IS, or IS to be deemed to be, directly or Indirectly, an offer or the solicrtallon of an offer to buy or sell any secUrity referred to or mentlOfled The matter IS presented merely for the convemence of the subSCriber While we beheve the sources of our information to be reliable, we In no way represent or guarantee the accuracy thereof nor of Ihe statements made herein Any action to 00 taken by Ihe subscnoor should be based on hiS own mveshgalllm and mlormallOn Delafield, Harvey, TabelJ Inc, as a corporation and Its officers or employees, may now have, or may later take, poSitions or trades In respect to any securities mentIOned In thiS or any fulure Issue, and such pOSitIOn may be different from any views now or hereafter e)(pressed In Ihls or any other Issue Delafield, Harvey, Tabellinc , which IS registered wrth the SEC as an Investment adVISor, may gIVe adVICe to tIS Investment adVISOry and other customers Independently of any statements made In thiS or In any other Issue Further Information on any security menlloned herein IS available on request I. I lid ,R ,,,